A pdf of the document submitted to ESA can be found at the Athena IRAP website, or here.

The proposal was reviewed for technical feasibility and scientific excellence by the ESA Science Directorate Future Missions Office and the Space Science Advisory Committee respectively. 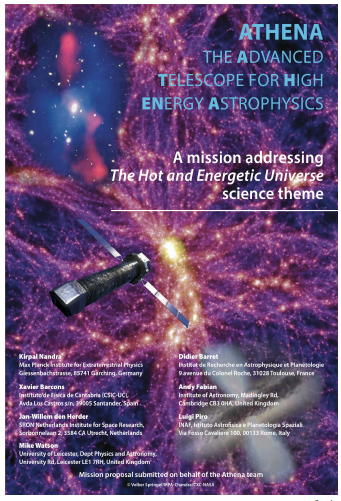 The ESA Cosmic Vision programme has been defined to comprise a succession of Medium and Large missions, covering the breadth of planetary, astrophysics, heliospheric and fundamental physics investigations. ESA normally provides the spacecraft and additional common payload sub-systems, while the scientific payload is provided by the ESA Member States. It was realised that particularly for Large (e.g. observatory class) missions, the exceptionally long lead times for developing instrumentation by the research institutes requires some certainty in planning. Therefore the Science Program Committee decided to define already, that the 2nd and 3rd large missions targeted for 2028 and 2035 launch opportunities should be allocated to key scientific themes.

A Senior Survey Committee recommended the prioritisation of these so-called L2 and L3 themes. Report here.

Subsequently the recommendation for the L2 theme of the Hot and Energetic Universe was made the subject for a call for proposals (here) and the L3 theme for the topic of Gravitational Wave detection has been made the subject of an advisory team to report on most effective mission architectures for a future mission call.