This site is under construction ! Please go to [Solar Orbiter](https://www.cosmos.esa.int/solar-orbiter) for the actual site
ESA uses cookies to track visits to our website only, no personal information is collected.
By continuing to use the site you are agreeing to our use of cookies. OK
Find out more about our cookie policy.

This trajectory is based on a short EVVEV cruise profile departing from Earth on February 2020 and it was referred as February Option B in a previous technical note [25]. The cruise phase until start of the remote sensing observations below 0.35 AU takes roughly 2 years. This fast cruise allows also launching on February 2019 by adding a 1:1 Earth resonant “parking orbit” in which the spacecraft spends 1 year before performing an Earth GAM that connects with the rest of the trajectory as if launched in 2020. The penalty for the 2019 launch is a 1-year longer cruise, an increased maximum Sun distance and the truncation of the trajectory at end of mission to comply with the lifetime requirement so that a lower solar inclination is reached. This chapter describes the trajectory properties of both launch options. Whenever possible, for instance the science phase, a common description is given using 2020 as reference.

The spacecraft is launched in 2020 with high infinite velocity and positive DLA (or is launched in 2019 and after an Earth GAM 1 year later is injected) into a delayed transfer to Venus describing more than one revolution about the Sun in 0.9 years. The next orbit is in 1:1 Venus resonance (0.6 years) and provides the proper phasing for the rest of the trajectory. Because of the resonance there is flexibility to select the altitude of the first 2 Venus GAMs. In order to avoid long eclipses, the altitude of GAM-V2 is constrained to 8000 km resulting in no eclipse for any of the first two Venus GAMs and a rather high altitude also at GAM-V1. 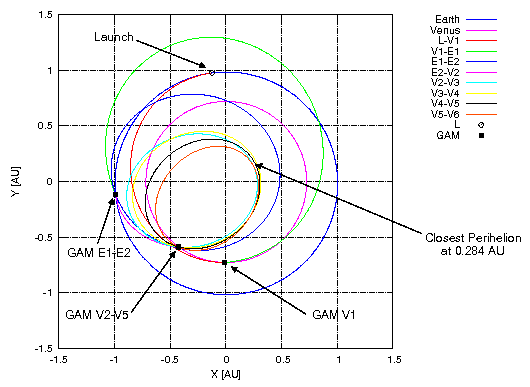 Venus-Earth arc is direct and the Earth is encountered before the aphelion pass. The Earth GAM injects the spacecraft into a heliocentric science orbit with perihelion at 0.32 AU in which the first remote sensing observations will take place. NMP starts then just after the Earth GAM only 1.8 years after launch in 2020 (2.8 years after launch in 2019).

Maximum Sun distance for 2020 launch occurs in this Earth-Venus arc at only 1.02 AU. For 2019 launch the maximum Sun distance occurs earlier in the 1-year Earth-Earth parking orbit at about 1.18 AU. In both cases there should be no need to send the spacecraft into a hibernation mode. Venus is encountered inbound for GAM-V3 with a hyperbolic velocity of 18.56 km/s at a Ls of roughly 129°, which is about half way from Venus optimal (Ls ~75°) and worst positions to increase the solar inclination. The sequence of resonances 5:4 4:3 3:2 3:2 3:2 is selected primarily for its excellent downlink properties. Indeed the science mission after GAM-V3 follows the same profile as 2018 Option D at the same Venus location for the GAMs, but a slightly different hyperbolic velocity. 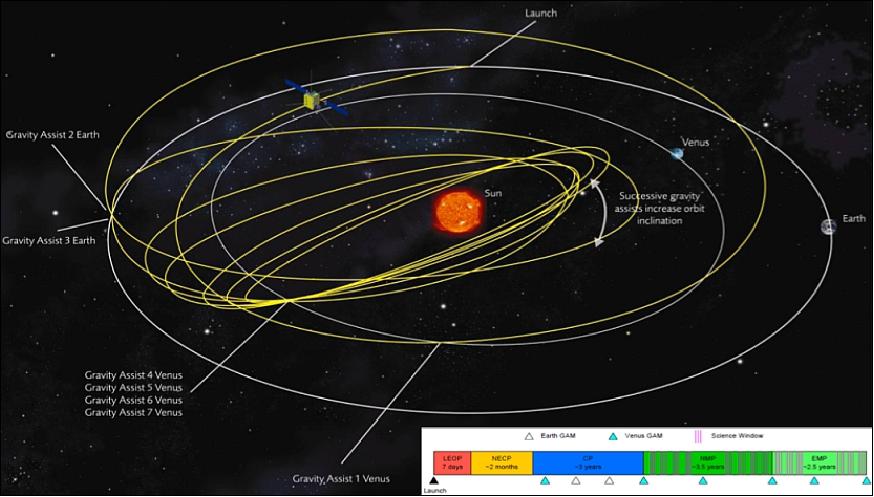 Alternatively, the inclination increase could be accelerated by slightly raising the perihelia of the 3 first resonances. The resulting orbits would be grazing 0.3 AU, with the 5:4 orbit already at a solar inclination of 12.5 deg, the next 4:3 at 21 deg, the first 3:2 at 27 deg and the second 3:2 at 31.8 deg. This is an interesting variant for launch in 2019 as within an overall duration of 10.2 years a solar inclination of roughly 32 deg would be achieved, although a penalty would be paid in science as the perihelion would not go below 0.3 AU.
A reference trajectory corresponding to launch on 7 th February is described in detail next. Table 3-26 and Table 3-27 present a summary of the main events/parameters of the mission. All results for this trajectory option have been obtained with the linked conics model.