Since their dual launches in July and August 2000, ESA's four Cluster spacecraft have been flying in formation around the Earth, sending back the first detailed, three-dimensional information about the magnetosphere and its interaction with the solar wind.

This unique examination of the magnetic bubble that surrounds our planet is about to be enhanced still further as the result of Double Star, a groundbreaking collaboration involving ESA and the Chinese National Space Administration (CNSA).

The Double Star programme involves the launches of two satellites - the first already placed in orbit on 29 December 2003 and a second scheduled for June 2004 - each carrying experiments provided by European and Chinese institutes. This will enable scientists to analyse data sent back simultaneously from no fewer than six spacecraft, each located in a different region of near-Earth space. The simultaneous, six-point study should provide new insights into the mysterious mechanisms that trigger magnetic storms and brilliant auroral displays in polar skies. 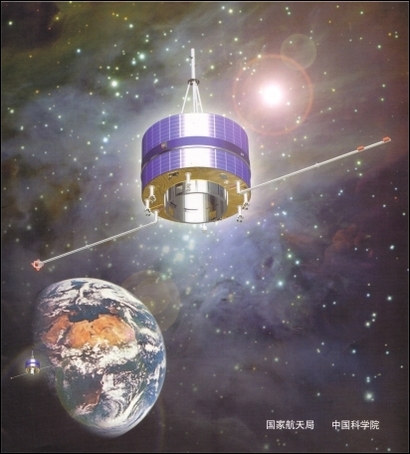 Artist's impression of Double Star in orbit around the Earth