LISA in a nutshell

Gravitational waves are ripples in spacetime produced by the acceleration of very massive objects, such as black holes coming together and merging. Different objects in space produce gravitational waves of different timescales, ranging from milliseconds to billions of years. Some of these waves can only be observed from space.

This is the goal of ESA’s future mission LISA, which will be the first space-based gravitational wave observatory. 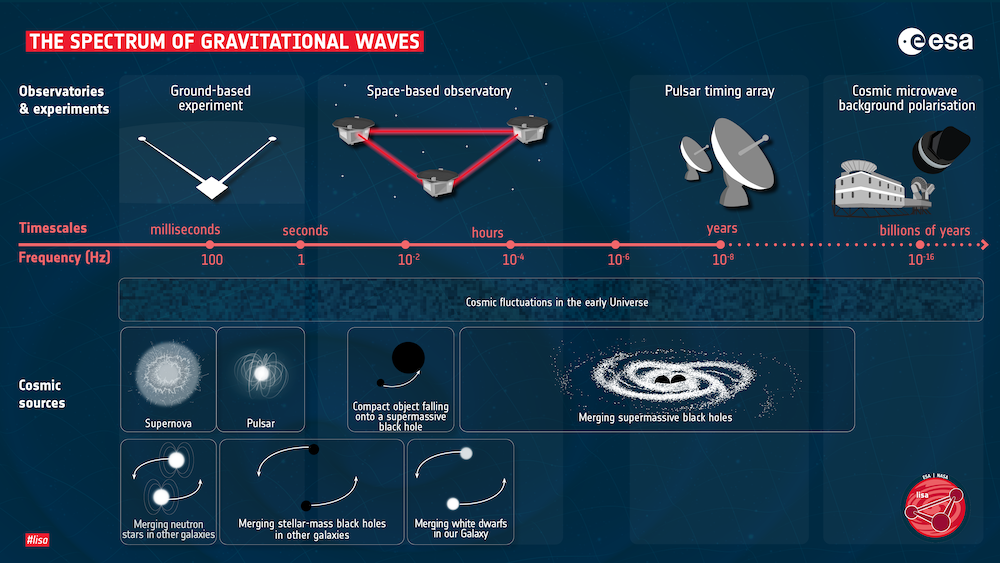 LISA is a mission designed to measure gravitational radiation over a broad band at low frequencies, from about 0.1 mHz to 0.1 Hz, a band where the universe is richly populated by strong sources of gravitational waves. It will measure signals from a wide range of different sources that are of strong interest to the astrophysics of black hole and galaxy formation, to tests of general relativity and to cosmology: massive black holes mergers at all redshifts; extreme mass ratio inspirals; the inspiral of stellar-origin black hole binaries; known binary compact stars and stellar remnants; and probably other sources, possibly including relics of the extremely early Universe, which are as yet unknown.

A major objective of LISA is to determine how and when the massive black holes, present in most galactic nuclei today, have formed and grown over cosmic time. It will explore almost all the mass-redshift parameter space relevant for reconstructing their evolution. The gravitational wave signal from coalescing black holes reveals their spin and redshifted mass, and the distribution of masses and spins will be studied to differentiate between different formation scenarios.

LISA will also study in detail the signals from thousands of stellar-mass close binaries in the Galaxy and give information on the extreme endpoints of stellar evolution. It will provide distances and detailed orbital and mass parameters for hundreds of the most compact binaries, a rich trove of information for detailed mapping and reconstruction of the history of stars in our Galaxy, and a source of information about tidal and non-gravitational influences on orbits associated with the internal physics of the compact remnants themselves.

By observing highly relativistic black hole-black hole coalescences, LISA will provide exceptionally strong tests of the predictions of General Relativity. The signal of merging binary black holes, where maximally warped vacuum spacetimes travel at near the speed of light interacting strongly with each other, allow the study of the full nonlinear dynamics of the theory of gravity. By observing the signal of stellar black holes skimming the horizon of a large massive black hole at the centre of a galaxy, LISA will measure the mass, spin and quadrupole moment of the central object testing its level of Kerrness; thus testing for the first time the black hole hypothesis, and the no-hair conjecture.

Finally, a space-based gravitational wave detector will probe new physics and cosmology, and will search for unforeseen sources of gravitational waves. The LISA frequency band in the relativistic early Universe corresponds to horizon scales where phase transitions of new forces of nature or extra dimensions of space may have caused catastrophic, explosive bubble growth and gravitational wave production.