A History of Collaboration

The history of scientific collaboration between China and ESA began in 1980 through the signing of a document facilitating the exchange of information between ESA and the Commission for Science and Technology of China. Twelve years later, the Chinese approached ESA with a proposal to establish a Data and Research Centre in Beijing for Europe's cornerstone Cluster mission.

China's request to participate in an international space programme for the first time culminated in an official cooperation agreement that was signed on 25 November 1993. As a result of this agreement, a number of Chinese scientists and engineers were hosted by ESA and the institutes of Cluster principal investigators (PIs), while five of their compatriots became co-investigators on Cluster.

The next step came in 1997, when Professor Zhen-Xing Liu of the Chinese Centre for Space Science and Applied Research (CSSAR) gave a presentation on the proposed Double Star programme at the Cluster Science Working Team meeting. Six Cluster PIs responded to the invitation to participate by offering to provide flight spare models of their Cluster experiments.

In September 1999, the ESA Director General was invited by the Administrator of the Chinese National Space Administration to discuss ESA / China collaboration in space activities and more particularly collaboration on the Double Star Programme. Shortly after the Double Star Phase A report was presented to ESA and to the Cluster Science Working Team. Once again, the European response was very positive.

Further progress was made in September 2000, when Double Star was given the green light by the Chinese government. In April 2001, a European delegation composed of ESA representatives and European PIs visited CNSA in order to finalise the preparation of the agreement between the two agencies and to review the project's status. Finally, on 9 July 2001, an historic agreement to develop the joint mission was signed at ESA Headquarters in Paris by the ESA Director General, Antonio Rodotà, and the CNSA Administrator, Luan Enjie.

"This agreement marks a significant advance for international co-operation in the exploration and peaceful use of outer space," said Mr. Rodotà. "It is one of the most important landmarks in scientific collaboration since ESA and the People's Republic of China first agreed to exchange scientific information more than 20 years ago." 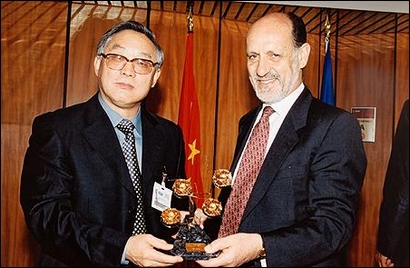 
Under the agreement, ESA agreed to contribute 8 million Euros to the Double Star programme. This funding would be used for refurbishment and pre-integration of the European instruments, acquisition of data for 4 hours per day and co-ordination of scientific operations.