In the original mission profile, the Huygens mission was planned to be carried out during the first Titan flyby in November 2004. Following the discovery of an anomaly in the Huygens telecommunication system a recovery mission scenario was implemented. Huygens will be carried out during the third targeted Titan encounter after Saturn Orbit Insertion. The last important Probe activity before release will be the loading of the on-board timers that will wake-up the probe's computers at a pre-determined time prior entry. Before the separation, Cassini is placed on a trajectory that intercepts Titan. Huygens will separate from the Orbiter at 30 cm/s and a spin rate of 7 rpm for stability during the coast and entry phases.Five days after release, the Orbiter will perform a deflection manoeuvre that will provide the required geometry for communication during the Probe mission.

The entry subsystem consists of the 2.75 m diameter front heat shield and the back cover, both protected against the radiative and convective heat fluxes generated during the entry. The peak heat -flux is expected in the altitude range below 350 km down to 220 km, where Huygens decelerates from about 6 km/s to 400 m/s (Mach 1.5) in less than 2 min. At Mach 1.5, the parachute deployment sequence initiates, starting with a mortar pulling out a pilot chute which, in turn, pulls away the aft cover and deploys the main chute. After inflation of the 8.3 m diameter main parachute, the front shield is released to fall from the Descent Module. Then, after a 30 s delay built into the sequence to ensure that the shield is sufficiently far away to avoid instrument contamination. Now the GCMS and ACP inlet ports open and the HASI boom deploy. The DISR cover is ejected 2 min later. The main parachute is sized to pull the Descent Module safely out of the front shield. It is jettisoned after 15 min to avoid a protracted descent and a smaller 3.03 m diameter parachute is deployed. The descent will last between 2h and 2h30. The major events of the entry and descnet sequence are illustrated in the figure. 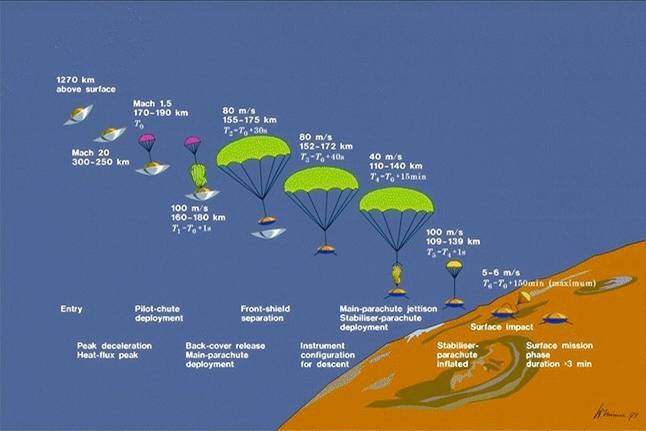 After Huygens separation from the Orbiter, the only energy source is from five primary batteries that have a total capacity of at least 1800 Wh. The batteries and all other resources are sized, with a comfortable margin, for a mission duration of 153 min.

Huygens transmits its data on two channels at a constant 8 kbits/s to the overflying Orbiter. Cassini points its High Gain Antenna to a predefined location on Titan, nominally for a full 3h period to allow data reception after landing. Data from the surface could last for 43 min for a nominal descent time of 137 min. The Probe data are stored on-board the Orbiter in its two solid-state recorders for later transmission to Earth as soon as the HGA can be redirected after Huygens has completed its mission.