The Uniqueness of our Solar System

While the structure and mass distributions of bodies in our Solar System are well known, we only have indirect and partial knowledge of its formation and evolution. To place our system in context we must look to other systems and study their architectures and composition. From current observations, it has become obvious that the bulk compositions of exoplanets can differ substantially from those of Solar System planets and this must be indicative of the formation process. Thanks to PLATO, the density and composition of exoplanets will be obtained from the measured mass and the radius. In addition, important properties of host stars, such as chemical composition and stellar activity will be measured by PLATO and the associated ground-based follow-up for a large sample of systems. Extending the bulk characterisation towards cool terrestrial Earth-sized planets on Earth-like orbits will be unique to PLATO and key to answering the question: how unique is our Solar System? 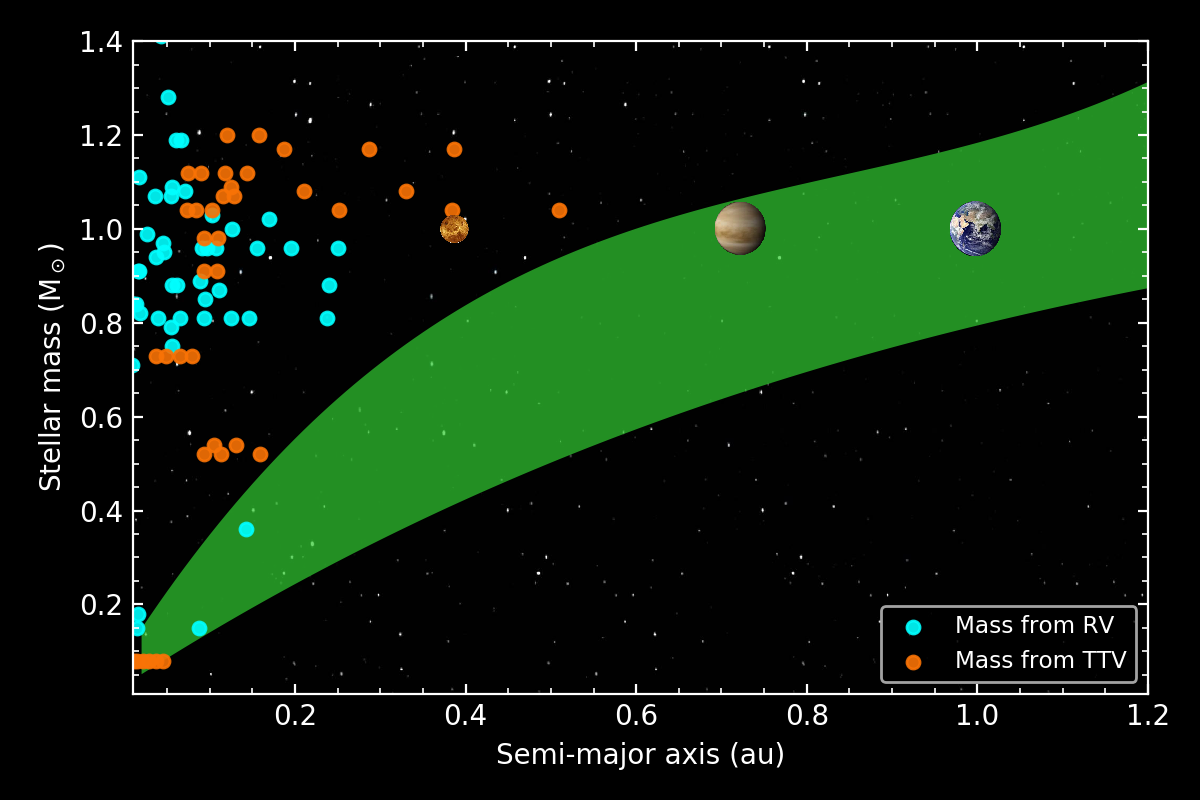 Super-Earth exoplanets with known radius and mass (1 < Mplanet ≤ 10 MEarth or Rplanet ≤ 2 REarth) for different host star masses, and with respect to the position of the habitable zone shown in green (Rauer et al. 2014). Earth, Venus and Mercury are shown for reference. The habitable zone, defined as the area around a star where water may be in liquid form on the surface of an orbiting planet, is empty except for planets around very cool stars. The main objective of PLATO is to populate this diagram by determining the bulk properties and ages of small planets up to the habitable zone of Sun-like stars.

Interiors of terrestrial and gas planets

Many confirmed exoplanets fall into new classes unknown from our Solar System, for example "hot Jupiters", "mini-Neptunes", or "super-Earths" (rocky planets with masses below 10 MEarth). It came as a surprise that gaseous planets can be as small (or light) as a few Earth radii (or masses). As a result, many of the smallest (or lightest) exoplanets known today cannot be classified as either rocky (required for habitability) or gaseous, because their mean densities remain unknown for lack of mass or radius measurements. PLATO will be unique in providing vital constraints for planetary interior models.

Planets and their host stars evolve. Giant gas planets cool and contract, a process which can last up to several billion years: this process will be studied by PLATO through accurate measurements of stellar ages. Using accurate radius and mass measurements, we will determine how planets form and evolve by observationally building evolutionary tracks for gaseous exoplanets as functions of stellar properties. Over time, terrestrial planets lose their primary hydrogen atmospheres, develop secondary atmospheres, and may develop life. PLATO will provide key data on terrestrial planets at intermediate orbital distances, including in the habitable zones of solar-like stars with different ages, allowing us to study Earth-like planets at different epochs. Furthermore, the architecture of planetary systems is shaped through physical and dynamical processes on time scales accessible to PLATO asteroseismic dating.

Planets discovered around the bright PLATO stars (mV = 4–11 mag) will be prime targets for spectroscopic transit follow-up observations of their atmospheres (using, e.g., JWST, E-ELT). Small planets with low mean density are particularly interesting as they are likely to have a primordial hydrogen atmosphere. Small planets with high densities are likely to be terrestrial planets with secondary atmospheres. The PLATO catalogue will therefore play a key role in identifying small planet targets of interest at intermediate orbital distances. It will also provide information on planetary albedos and the stratification of planetary atmospheres. Finally, the close-in planets found around stars of different types and ages will provide a huge sample to study the interaction between stars and planets due to, e.g., stellar winds or tides.

In addition to the core science objectives described above, PLATO will address a large number of complementary science topics. Its high precision and long duration photometric measurements will enable discoveries of circumbinary planets, moons orbiting exoplanets, exorings, comets in other systems, and planets around young and evolved stars. Thanks to its capability to observe in various directions of the sky, PLATO will sample a much wider variety of time-variable phenomena in various populations of the Galaxy than hitherto. PLATO's asteroseismic characterisation of red giants, stellar ensembles, binaries, magnetic and flaring stars, clusters and populations will be a significant addition to the Gaia data.