The Science Ground Segment (SGS) Team acts on behalf of the Mission Manager, Project Scientist and Principle Investigators (PI) teams, and its work is performed in consultation with the Science Operations Working Group (SOWG).

The Science Working Team (SWT) advises ESA on science matters related to the mission and assists the Project Scientist in elaborating science strategies and optimising the scientific return of Mars Express. Through its SOWG subgroup, it establishes the policy, strategy and guidelines for science operations, based on the Mars Express scientific requirements and objectives. The SOWG is composed of PI team representatives assigned to address all science operations issues. It is important to note that a basic principle of the Mars Express science operations, as clearly expressed in the Science Management Plan, is the requirement for a strong personnel commitment by each PI team for the preparation of the payload operations.

The high-level scientific planning is performed by the SGS, with support from the SOWG and science teams. This leads to the production of each Medium-Term Plan or MTP. For the detailed planning and for the transition to and implementation of the commanding of each instrument's operations, the SGS interfaces with the MOC on one side, and with the PI institutes on the other side, as shown in the Figure below. The main tasks for the SGS are (i) support in the planning of the detailed science operations timelines and the respective data return, (ii) the generation of the payload Pointing Requests (PTR), (iii) the generation of the consolidated Payload Operations Request (POR) files for all Mars Express orbiter instruments, and (iv) the onward transmission of the planning and commanding files to the MOC.

The payload operations for all science phases are executed using timelines and procedures documented within the ESOC Flight Operations Plan (FOP). Most information required for the elaboration of the science planning and for the production by SGS or ESOC of the instruments commanding timelines and procedures is documented in the instruments Flight User Manuals. The spacecraft operations are managed according to the FOP by the Spacecraft Operations Manager (SOM) at the MOC. Spacecraft safety, under the responsibility of ESOC, is considered a primary goal and could potentially lead to severe constraints on science operations activities. 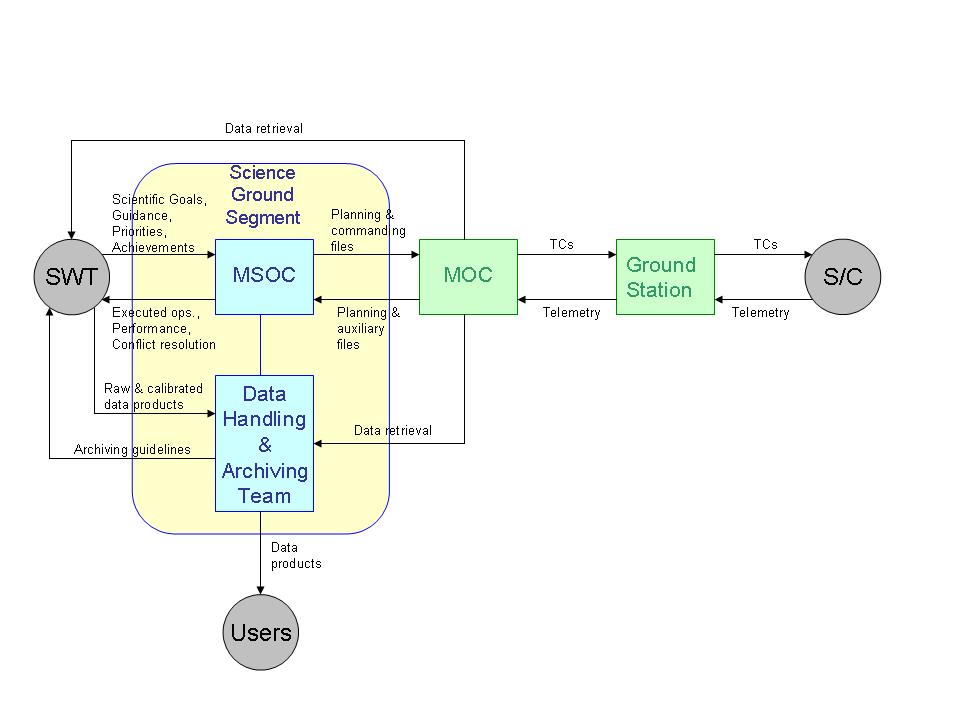 Overall organisation of the interfaces for the Mars Express science operations.