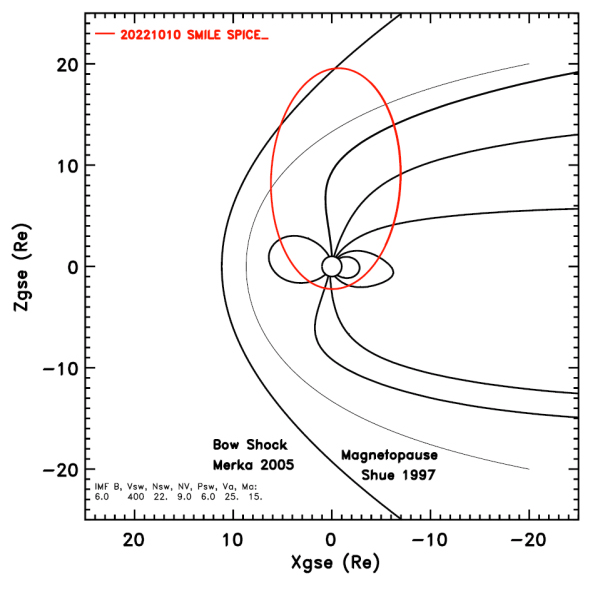 SMILE is equipped for remote-sensing observations of the magnetosphere and its surroundings, imaging of Earth's auroras, and in situ measurements of the solar wind plasmaand magnetic field – simultaneously. This multi-faceted goal shapes the spacecraft's orbital parameters. SMILE must reach a high enough altitude to view the outside edge of Earth's magnetopause and at the same time obtain good spatial resolution of the auroral oval.

The chosen orbit is therefore highly elliptical and highly inclined (70 or 98 degrees depending on launcher), and takes SMILE a third of the way to the Moon at apogee (19 RE or an altitude of 121 182 km). This type of orbit enables SMILE to spend much of its time (about 80%, equivalent to nine months of the year) at high altitude, allowing the spacecraft to collect continuous observations for longer periods of time. This orbit also limits the time spent in the high-radiation Van Allen belts, and in the two toroidal belts.

The spacecraft and instruments will be operated by the CAS SMILE Mission Centre (MC), according to the timeline delivered by the CAS Science Application System (SAS). The MC will also store all the commands and data sent to and received from the spacecraft – the averaged total data rate for the SMILE payload is 171 kbps, equivalent to 32 Gbit per orbit. SAS will coordinate instrument observations and distribute data. The ESA Science Operation Centre (SOC) at ESAC will also receive and distribute data.

The nominal mission lifetime for SMILE to achieve its science goals is three years.