Visit of the Baths of Diocletian

The venue of the conference is part of the Baths of Diocletian.  A guided tour will be given on the 11th of September after lunch.

Visit to the meridian line of s. Maria degli Angeli

The visit will be guided by Prof. Costantino Sigismundi. Introduction from Prof. Sigismondi:

2018-19 Astrometric Campaign for the Clementine Gnomon: New Results for Understanding the History and the Potential of the Instrument built by Francesco Bianchini in 1700-1702.

The Meridian Line of s. Maria degli Angeli was built by Francesco Bianchini (1662-1729) in 1700-1702 with the funding of cardinal Gianfrancesco Albani who become pope Clement XI (1700-1721) during the building of the instrument. For this reason it was called "Clementine Gnomon" by Francesco Bianchini in the book "De Nummo et Gnomone Clementino" of 1703. It was the most important pinhole meridian line of the World in his times (Heilbron, 1999).

Bianchini was in contact with Cassini and Newton, realized an instrument with the purposes of measuring accurately a) the tropical year to assess the parameters of Gregorian calendar and b) the variations of the obliquity of the ecliptic.
For this purpose he realized also an "obliquity meter" recently discovered by Sigismondi (2018)
https://ui.adsabs.harvard.edu/abs/2018iau3.book...13S/abstract
in function during the summer solstice.
The meridian line has been initially oriented by using the Polaris western and eastern elongations, used to determine the reference line on which observing both culminations of the Polaris itself for calculating the latitude, after the refraction's corrections.
After that "boreal line" of 6 m, the big meridian line of 45 m has been draft by using what was considered the best reference available at that time for timing: another meridian line calibrated by Giacomo Filippo Maraldi (1665-1729) in palazzo Venezia through visual signals.
The first alignment using Polaris resulted within 1 arcminute East from geographic North, the second one within 5' East; with this numbers Bianchini was at the top level of astronomical technology at the epoch.
Moreover in Rome at the same time was active Giuseppe Campani author of the best telescopic lenses of the time, and Bianchini used them also for observing the surface of Venus (1728).
After the death of Bianchini, Anders Celsius (1701-1744) used the meridian line in 1732, finding it deviated of 2' East with respect to the geographical North. In 1750 the Jesuit astronomer Ruggero Giuseppe Boscovich found this deviation of the main meridian line as 4.5', and ordered some modifications to the works realized by the architect Luigi Vanvitelli for that Jubilee year upon the will of pope Benedict XIV. These modifications allowed the solar light to reach again the meridian line, at least for some minutes around the meridian transit.
The meridian line remained fixed and horizontal (a 40 m water level was built for verificating it) for more than 3 centuries of its history, so the different measured deviations from North respect the technological level of each time.

Bianchini published his results in a book in 1703 and on the stones of the Basilica in the same period: there are the latitude of the pinhole,  in which is included the effect of the stellar aberration of Polaris at the time of the observation (1701, 26 years before James Bradley discovered the effect), and the dates of solstices and equinoxes of 1703.
To measure the tropical year Bianchini recovered the solstices by using combined observations of Sun and reference stars in daylight, and the equinoxes by using the two "chronometers" next to the meridian line, which exploit the Egnazio Danti's law that next to the equinoxes the solar declination changes of 1'/hour.

The accuracy declared and effectively obtained by Bianchini in solstices and equinoxes timing was within 10 minutes of time.

To prove it we realized a set of more than 80 meridian observations in the season 2018-2019, to understand better the observational technique used by Bianchini and colleagues three centuries ago. We could find the influence due to the stellar aberration of reference stars used in daytime and of the Polaris which is reflected on the Equator's position used to chronometer the equinoxes.
Many of these observations have been published as video, and also the atmospheric turbulence has been studied in detail; this has implications on the absolute timing accuracy (0.3 s) and to the possibility to measure directly the de-rotation of the Earth by comparing the observed meridian transits with the ephemerides.

In the second decade of september the variation of the solar declination is near its maximum value of -1'/hour and the variation of the solar position is appreciable from one to day to the following. Moreover the passage of the solar image next to an inscription in memory of Vienna battle (12 september 1689) will allow considerations on the gregorian calendar effects, which tend to cancel after each 4 centuries.
Moreover this inscription has the form of the solar image, and its northern half is similar to the two solstice's meters (see photo of July 1st 2019 with superimposed the solstices of 1702 and 2019), this permitted their identification last year.

Sigismondi, C.  List of Video for the Astrometric Campaign 2018-2019 for the Clementine Gnomon
https://docs.google.com/document/d/1i63OT0jYgSvvfsD-hXAG_U2VinAlkE_ZzwN7LeduHDE/edit?usp=sharing 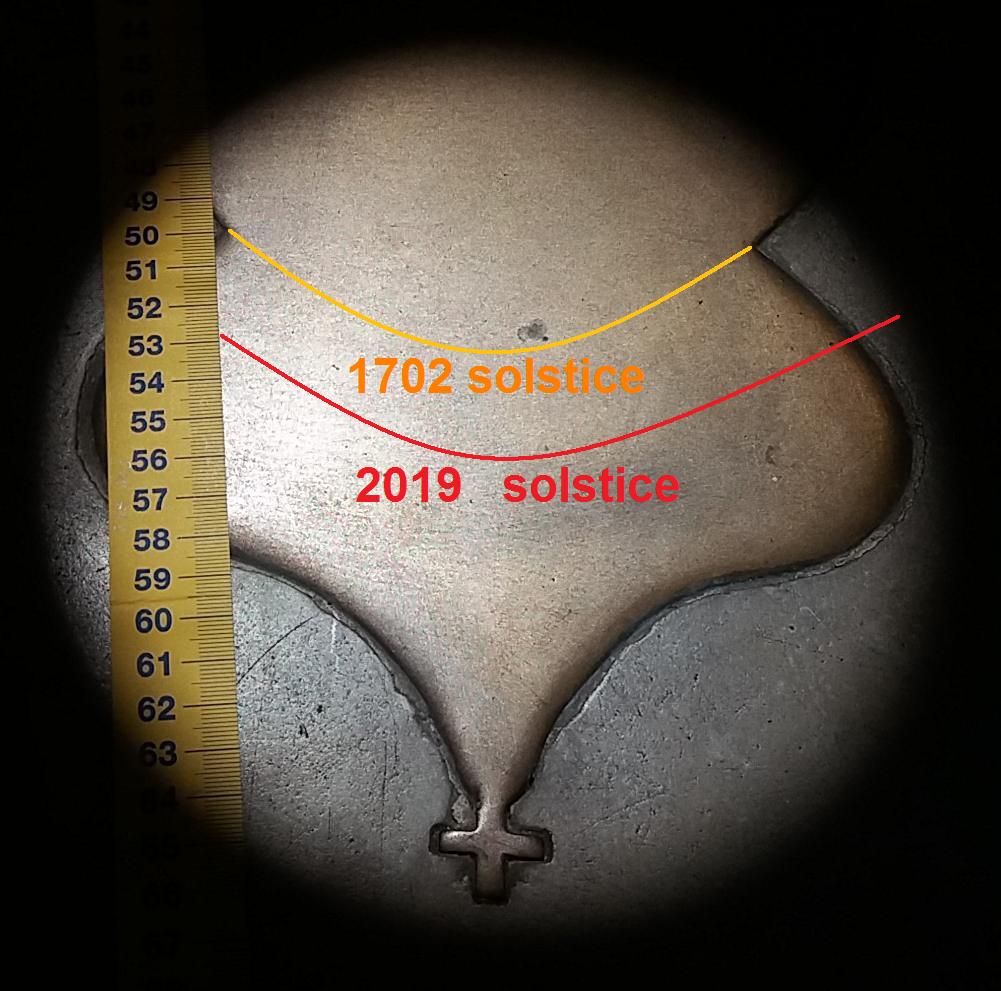