The Mercury Magnetospheric Orbiter (MMO) is a spin-axis stabilised spacecraft with a rotation rate of 15 rpm or spin period of 4s; the spin axis will be nearly perpendicular to Mercury's equator. Altitude range is currently expected to be from 590 km to 11639 km – the apoherm is nearly 6 planetary radii from planet's centre.

Structure of the spacecraft

The main body of the spacecraft is octagonal and would fit inside a circle of 1.8 m diameter. The height of side panel is 0.9 m; the upper portion is 50% solar cells and 50% optical solar reflectors (OSRs). There are two decks (upper and lower)separated by 40 cm that hold the instruments, a central cylinder (thrust tube) and four bulkheads. 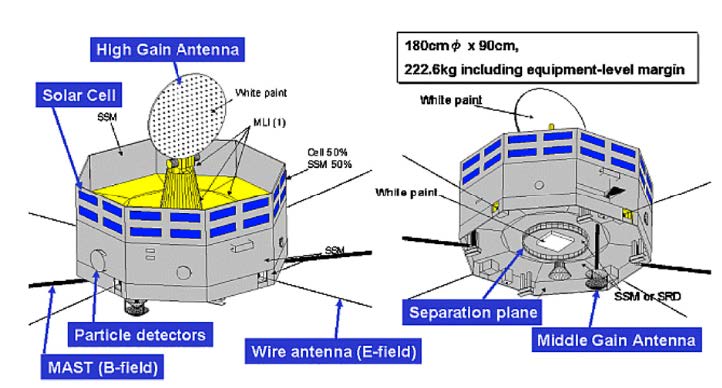 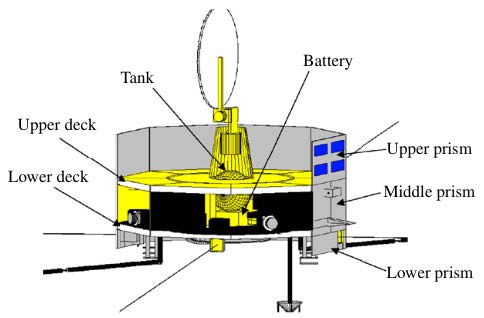 MMO structure (side view) (after Fig. 4, Yamakawa et al., 2008).
The spacecraft attitude will be determined by a pair of sun sensors on the side panel and a star scanner attached to the bottom surface. The attitude is controlled by the propulsion system with a cold gas jet. A nutation dumper installed inside the central cylinder is used for passive nutation dumping.

Overview of the instruments

The MMO carries as payload:
MDM - Mercury Dust Monitor
MGF - Magnetometer
MPPE - Mercury Plasma Particle Experiment
MSASI - Mercury Sodium Atmospheric Spectral Imager
PWI - Plasma Wave Investigation
The figure below shows how the sensors and electronics/receivers fit together. All of the inputs to DPU1 are from the MPPE suite, and inputs from the other four suites/instruments are routed to DPU2. 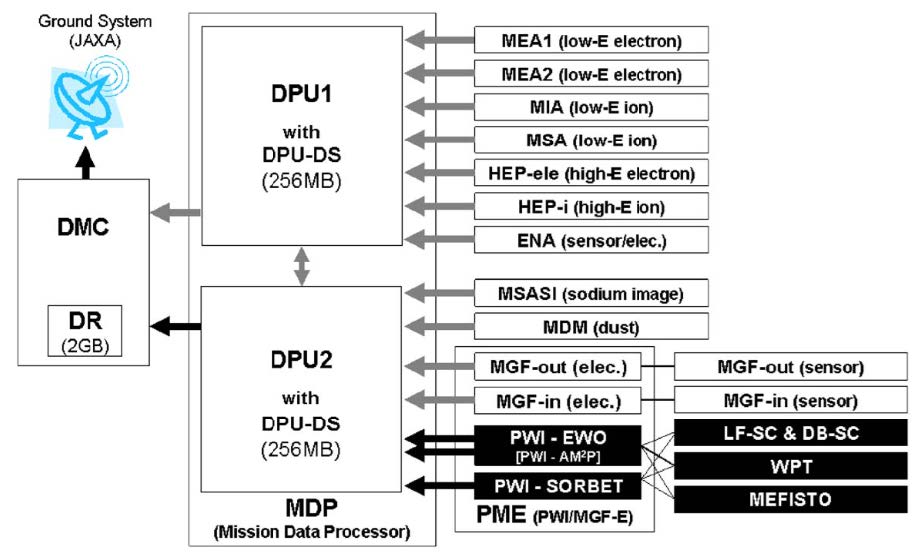 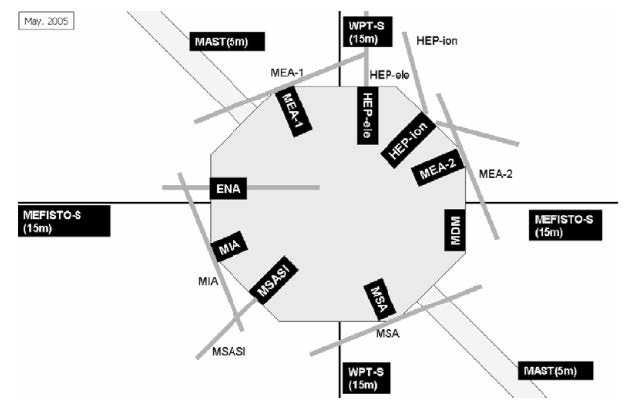 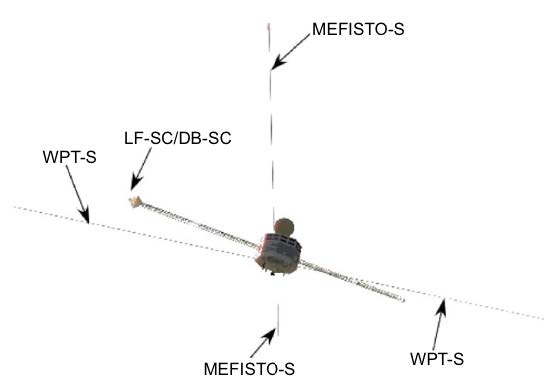 External view of the MMO spacecraft and PWI sensors (after Fig 3., Kasaba et al.,
2010).
The labelled mast is referred to as MAST-SC and the unlabelled mast is termed MAST-MGF and holds the MGF dual-sensor instrument. The antennas are PWI's WPT and MEFISTO (electric-field sensors), which measure 32 m tip-to-tip, or 15 m each from the s/c. 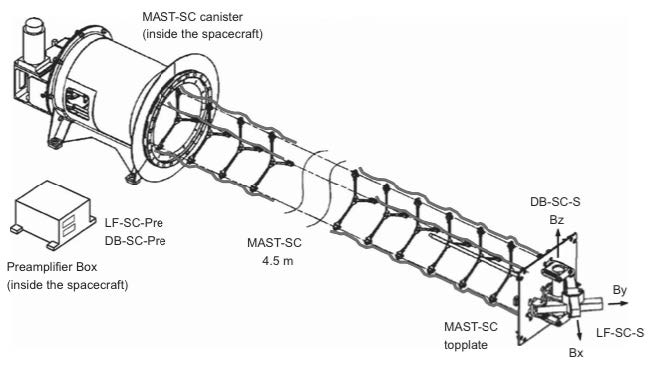 Detailed view of the extendable mast system (after Fig. 25, Kasaba et al., 2010).
One mast (MAST-MGF) holds MMO/MGF (dual fluxgate magnetometer; MGF-O at the tip and MGF-I 1.6 m from the tip) and the other mast (MAST-SC) holds both PWI's LF-SC (Low-Frequency Search Coils) and DB-SC (Dual-Band Search Coils) at the tip. Extension of the masts will be performed in the initial phase of the MMO operation just after the separation of the MMO from the MCS (Mercury Composite Spacecraft) at the Mercury orbit. 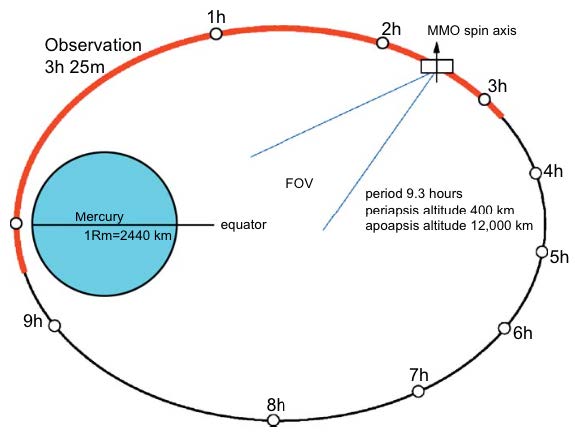 The trajectory of the MMO spacecraft. MSASI observations may be performed
during an interval of 3h 25m between periapsis and apoapsis (the red arc) (after
Fig. 1., Yoshikawa et al., 2010).
As the spin axis is in the same direction as the spin axis of Mercury, the spacecraft will remain ‘upright' throughout the orbit around Mercury; the bottom of the lower deck (radiator and second surface mirror (SSM)) and the top of the upper deck (MLI) will be able to ‘see' Mercury above the northern hemisphere and southern hemisphere, respectively. An HGA of 80cm diameter is used for the high speed X-band. The average bit rate is 16 kbps, which in turn translates into ~40 Mbyte/day assuming a 6 h consecutive pass on average. 2.0 GByte volume is assumed for the data recorder for the storage of MMO housekeeping and science data before the transmission to the Earth. 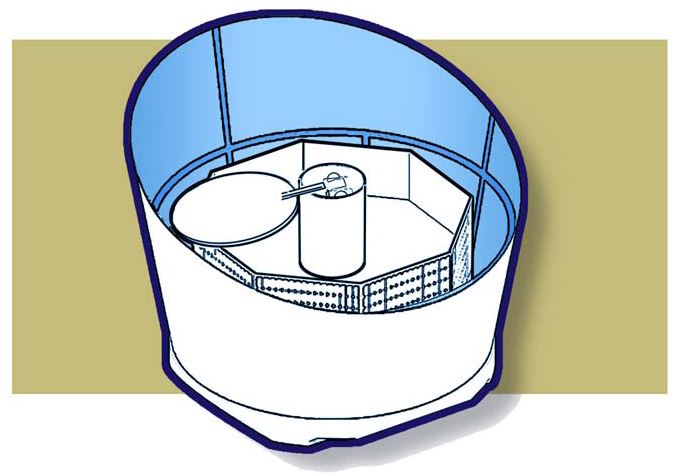 MMO Sunshield and Interface Structure (MOSIF) surrounding the MMO and with closure MLI to MPO (after Fig 9., Benkhoff et al,. 2010).
As the MMO is a spinning spacecraft, it needs to be thermally protected during the interplanetary cruise phase - this is done by the MOSIF (figure above).
Taken from:

Yoshikawa, I. et al. The Mercury sodium atmospheric spectral imager for the MMO spacecraft of Bepi-Colombo. Planetary and Space Science 58, 224–237 (2010).