SERENA is an instrument composed of four units of complementary neutral and ionised particle detectors. It can provide information on the whole surface-exosphere-magnetosphere coupled system and the processes involved, plus the interactions between energetic particles, the solar wind, micrometeorites and the interplanetary medium. This instrument deals with some of the main scientific objectives of the BepiColombo mission: composition, origin and dynamics of Mercury's exosphere and polar deposits; and structure and dynamics of Mercury's magnetosphere.

More specifically STROFIO measures in-situ the lower-energies neutral particle composition and density in the exosphere; ELENA covers the higher energy spectrum of neutral particles released from the surface; MIPA will monitor the solar wind, whereas PICAM is optimized to measure low-energies planetary ions. Each unit is able to operate individually to achieve specific scientific objectives of its own, however, operating simultaneously greatly improves the chances of success of scientific objectives and allows for additional objectives.

ELENA (Emitted Low-Energy Neutral Atoms) is a neutral particle camera that investigates neutral gases escaping from the surface of Mercury, their dynamics and the processes responsible for such a population. ELENA has a 1-D field of view for mapping neutral particle release from the surface; the second dimension of the data will be provided by the movement of the spacecraft. ELENA's field of view is 4.5ºx76º, directed towards the surface of Mercury (nadir) with an angular resolution of 4.5º x 4.5º. ELENA measures energetic neutrals between 20 eV – 5 keV. The current operations plan uses low, nominal and high time-of-flight resolution modes. The choice depends on the season and distance to the planet. 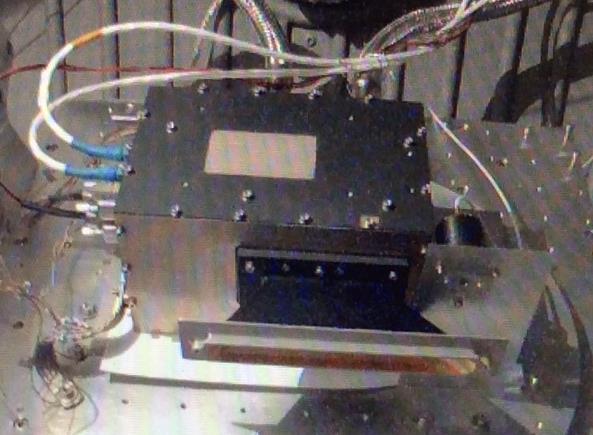 STROFIO (STart from a ROtating Field mass spectrOmeter) is a neutral particle spectrometer which investigates the exospheric gas composition. It is a novel type of mass spectrometer, where the start time is imprinted on the trajectory of the particle by a radio frequency electric field that bends the trajectory in a given plane. The stop time is the time when the particle reaches the detector. The neutral particles enter into the system through the first element, which ionizes the neutral gas. The ions are released into the focusing optic that then delivers a beam of ions to the dispersing system. Once the particles leave the dispersing region they move on a constant trajectory to the 2D detector system where the TOF is measured, from which the mass/charge can be calculated. Every particle is analyzed by the system, dramatically increasing the total sensitivity of the spectrometer.

As STROFIO collects low-energy particles in situ with its ram-facing funnels, it will collect more particles (and data) at lower altitudes. 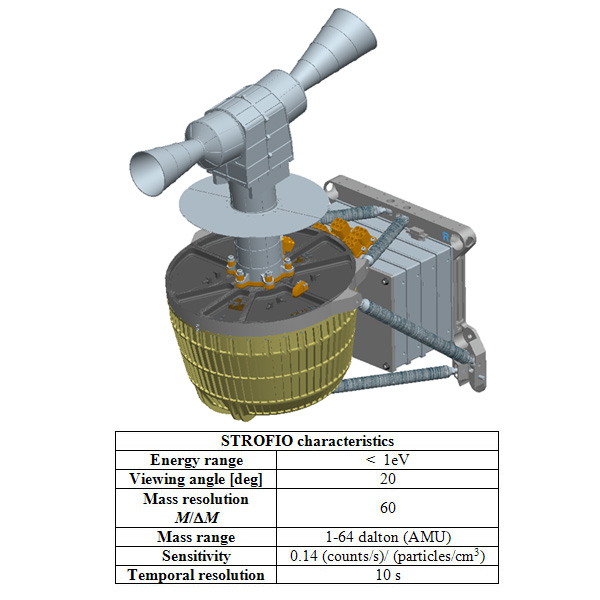 MIPA (Miniature Ion Precipitation Analyser) is an ion monitor investigating the chain of processes by which plasma precipitate towards the surface. It consists of a sensor and a single electronics board including a high voltage supply and front-end-electronics. The ion flux arrival angle is analyzed by an electrostatic deflector and the energy by a following electrostatic analyzer. The ions exiting the energy analyzer are post accelerated by a voltage applied to the time-of-flight (TOF) cell consisting of START and STOP surfaces and two electron multipliers (CCEM). The ions hit a START surface, produce secondary electrons and are then reflected towards a STOP surface. The electrons are collected by a START CCEM and produce a START pulse. Secondary electrons from the STOP surface are collected by the STOP CCEM and provide the STOP pulse. The timing of the event gives the ion velocity and, in combination with known energy, the mass.

The geometrical factor of MIPA is optimised for monitoring very high fluxes (up to 109 part/(cm2 s sr)) of the precipitating SW and magnetospheric ions that may eventually induce the ion-sputtering process. It has a 2π FOV, a poor ion mass resolution and can detect one direction at (15 eV – 15 keV). 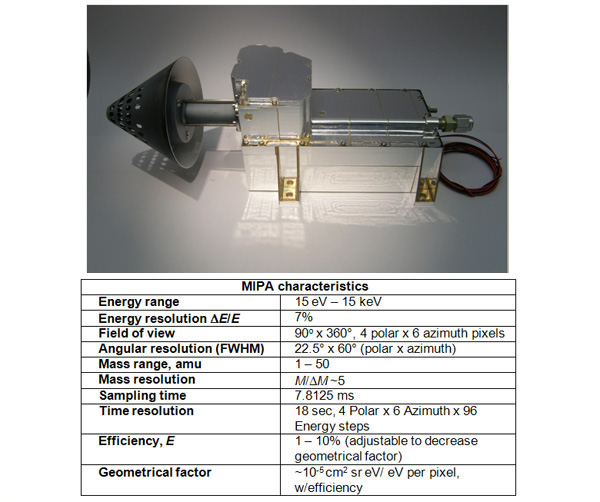 PICAM (Planetary Ion CAMera) is an ion mass spectrometer operating as an all-sky camera for charged particles to study the chain of processes by which neutrals are ejected from the soil, ionised and transported through the environment of Mercury. The ion optics is based on the principle of a modified pin-hole camera. The sensor is axi-symmetric along the Z axis and its field of view is a hemisphere centred along this axis. Ions enter through an annular slit on a conical surface. After being reflected by a planar mirror, particles pass through a narrow, ring-shaped exit and enter TOF and imaging section. The mass analysis section consists of a deflection gate, a plane mirror, a classical retarding potential analyser (RPA), and the detector. The voltage applied to the second reflecting mirror determines the upper energy threshold while the voltage applied to the retarding grid of the RPA determines the lower energy threshold. The detector provides the "stop" time for TOF measurements and is also used as an imaging detector which determines the position of the ion impact. 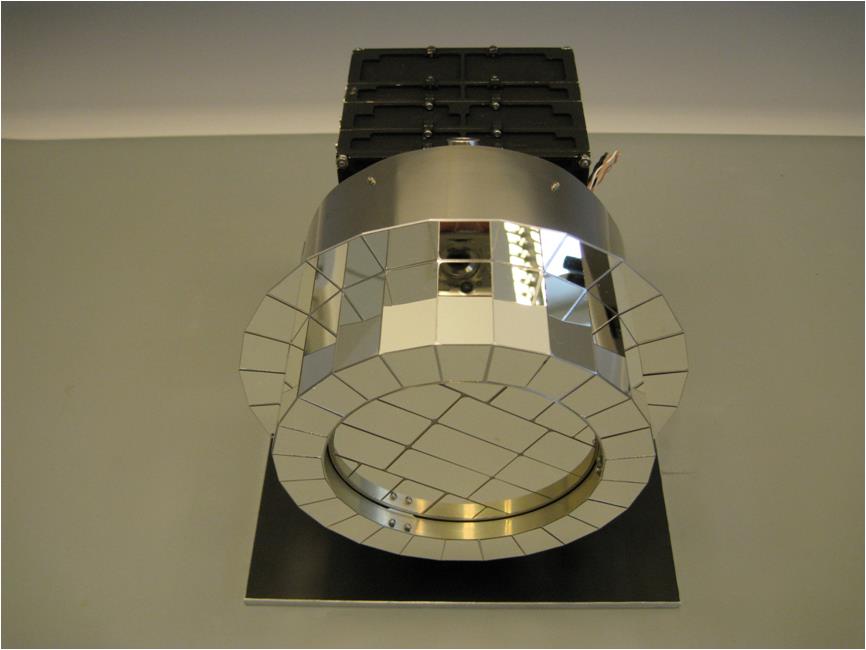 PICAM has a higher mass resolution than MIPA, which is optimised for measuring lower fluxes of exo-ionosphere. It has a 2π FOV, and can detect ions from the spacecraft potential up to ~3 keV. It can scan through different ion masses up to 123. PICAM is able to operate with a single-pulse or Hadamard coded, which collects more statistically sound data, but uses more power.