PROBA2 is an ESA micro-satellite launched on November 2, 2009.

PROBA stands for 'PRoject for Onboard Autonomy', which is part of  ESA's in-orbit Technology Demonstration programme. Following up on the success of PROBA1, PROBA2 hosts 17 new technological developments and 4 scientific instruments. Among the platform elements and experiments to be technologically demonstrated on PROBA2 are the new powerful ADPMS on-board computer, AOCS subsystems, highly integrated avionics and power units, a star tracker, sun sensors, a propulsion subsystem, Li-ion batteries, reaction wheels and an advanced stellar compass.

The science payload on-board PROBA2 consists of two main solar instruments (SWAP and LYRA) and two instruments to observe the space environment in the immediate vicinity of the spacecraft (DSLP and TPMU). With these instruments we aim at identifying and studying all events on the Sun that might have implications on the solar-terrestrial connection, both through imaging (SWAP) as well as through irradiance measurements (LYRA). In particular, the focus of the PROBA2 mission is the genesis and evolution of events that can affect space weather, such as coronal mass ejections, EUV waves, EUV dimmings, and solar flares. However, PROBA2 also provided wide-field observations of the large-scale evolution of the solar corona and the long-term variation of its total irradiance.

The PROBA-2 nominal mission was originally planned for two years which would end in October 2011.  ESA's Science Programme Committee extended the mission until December 2014. The mission management was then transfered to the Space Situational Awareness Programme.

PROBA2 is a microsatellite developed as an ESA technology mission by Verhaert Space, now Qinetiq Space (Kruibeke, Belgium). The PROBA2 mission is twofold. On one hand it is a technology demonstration mission, testing new technologies for satellites and systems in-ﬂight. On the other hand PROBA2 has a scientiﬁc mission: its sun-synchronous orbit, combined with two instruments for solar observation (SWAP and LYRA) and two space weather instruments (DSLP and TPMU) forms the ideal basis for operational space weather forecasting. 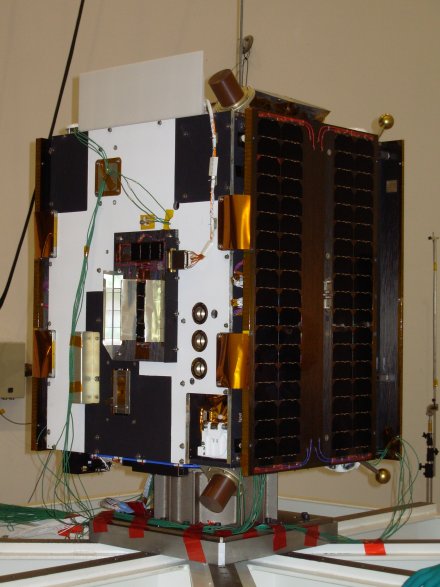 PROBA2 is a 0.6 × 0.6 × 0.8 meter, box-shaped structure with two deployable solar panels and a nominal weight of 130 kilograms. The primary mechanical structure consists of three aluminium honeycomb panels arranged in an H configuration and a bottom panel that acts as the interface to the launch vehicle. Almost all the satellite system units are mounted on these inner panels.

PROBA2 is fully three-axis stabilized. Turning moments are supplied by four reaction wheels, which can be unloaded via magnetorquers. Attitude determination is performed using an autonomous high-accuracy (5 arcsec over 10 seconds) two-head star tracker, GPS sensors and a three-axis magnetometer. Sun pointing to 100 arcsec accuracy is expected. Autonomous navigation is enabled with GPS position determination and orbit propagation. All the required navigation and maneuvering computations are performed onboard.

A single resistojet thruster is being used for orbit adjustment. The thruster uses xenon as the propellant gas and, as the xenon supply is depleted, the tank is repressurized with nitrogen from a solid-state gas generator.

Power is generated by triple-junction gallium-arsenide solar cells mounted on two deployable panels and one fixed panel. The solar generators provide a maximum of 110 watts of electrical power at the end of the nominal two-year mission. A 16.5 Ah lithium-ion battery supplies power during eclipses and when specific payload experiments require a peak power greater than the solar generators can supply. The spacecraft's power consumption varies between 70 watts and 110 watts, depending on its mode of operation.

PROBA2 was launched, together with the SMOS satellite, on a Rockot launcher from the Russian launch base Plesetsk, on November 2 2009.

For a general description of the launch see this ESA web page.

Because the instruments on PROBA2 are expected to monitor solar conditions around the clock, PROBA2 follows a sun-synchronous orbit. This means that PROBA2's orbit will track the terminator, following the dividing line between day and night on earth over the poles as in the figure on the right. Sometimes this type of orbit is referred to as a dawn/dusk orbit. As the earth rotates below, PROBA2 remains fixed either at dawn or dusk depending on which side of the planet it is over at the time.

To account for the effects of the earth's motion around the sun, PROBA2's orbit must precess by approximately one degree every day, tracking the slow changes of the position of the sun in the sky throughout the year. 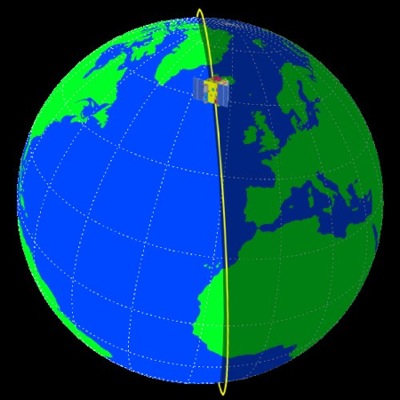 This means that, for most of the year, PROBA2 will have a full-time view of the sun, and will not experience eclipses of the sun behind the earth. However, because the orbit does not follow the terminator exactly, PROBA2 will experience brief periods of several weeks when eclipses of the sun by the earth do occur, specifically around December each year. During approximately 80 days (from November until January), visible eclipses occur every orbit with a duration ranging from a few minutes in November up to a maximum of 18 minutes and back to 0. These eclipses that will last for several minutes of every orbit are also scientifically useful. In this case, they provide an opportunity for onboard instruments to obtain special calibration images that cannot be captured when the spacecraft is in full sun. These images will help us better characterize the response of the SWAP and LYRA instruments to sunlight.

Orbits of this type have been used for solar observing by several satellites that observed the Sun such as Yohkoh, TRACE, and Hinode, affording them a nearly continuous view of the Sun.

Since PROBA2 has only 2 star trackers, which must always have a clear view of the open sky in order to maintain spacecraft attitude control, during an orbit the spacecraft will perform four large-angle rotations of 90 degrees (every 24 minutes). The timing of the maneuvers is such that star trackers are constantly oriented to point as far away from the Earth as possible. Each maneuver will take a few minutes and will be centered around these optimal switching times. Scientific users of PROBA2 data should take into account that approximately 20 minutes per orbit are lost for spacecraft stabilization procedures.

You can track PROBA2 in its orbit on the Heavens Above website. For advanced users, SPICE kernels containing complete information on the PROBA2 orbit and attitude is available here. 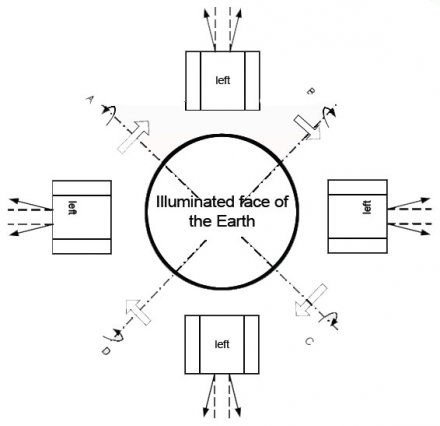