The CHEOPS payload comprises a single instrument - an on-axis Ritchey-Chretien telescope with a 300mm diameter clear aperture which feeds a single, broad-band focal plane that is sensitive to light of wavelengths between 350 nm and 1100 nm. Selected views of the payload are shown in Figure 1.

The instrument is composed of 4 main units: 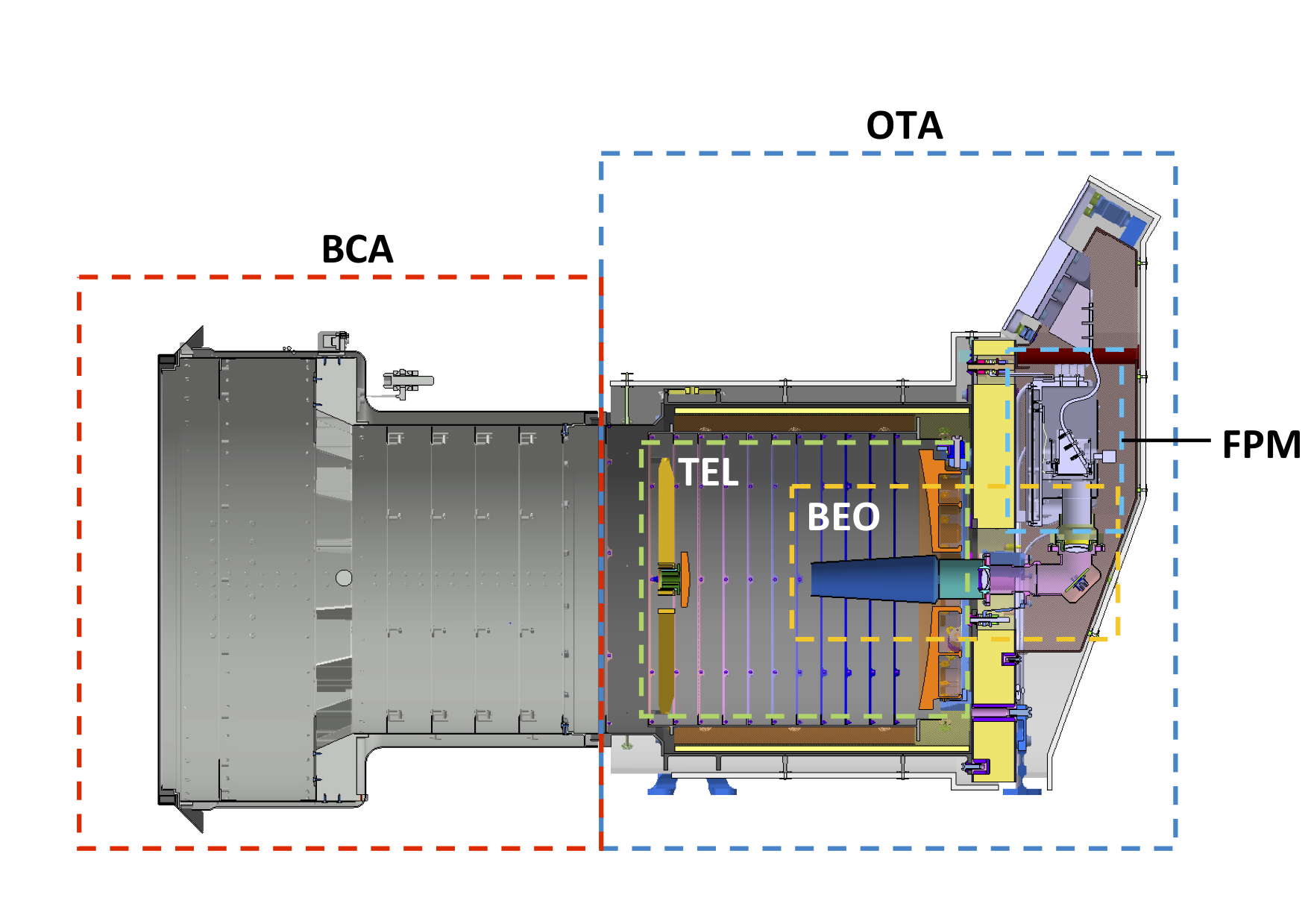 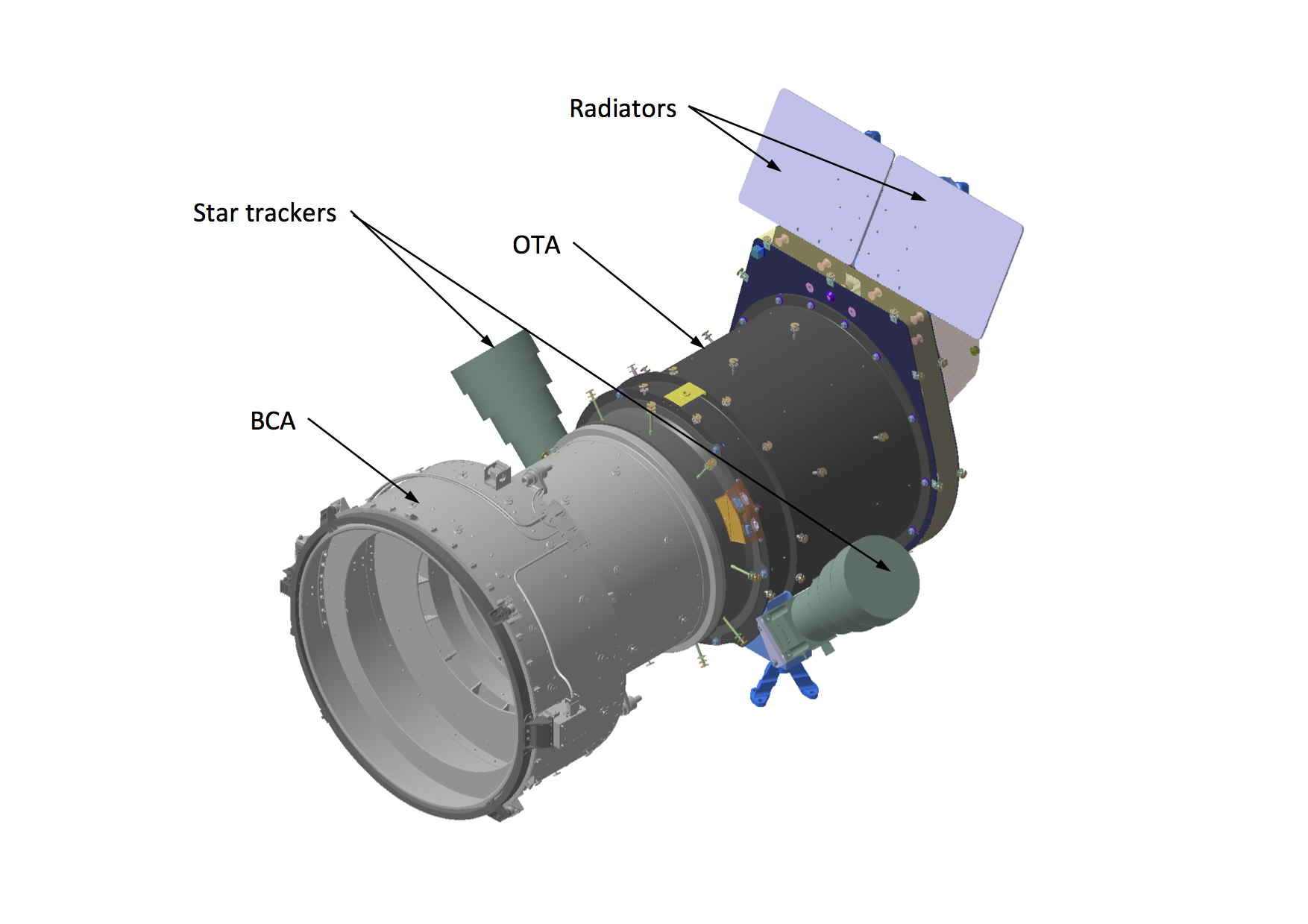 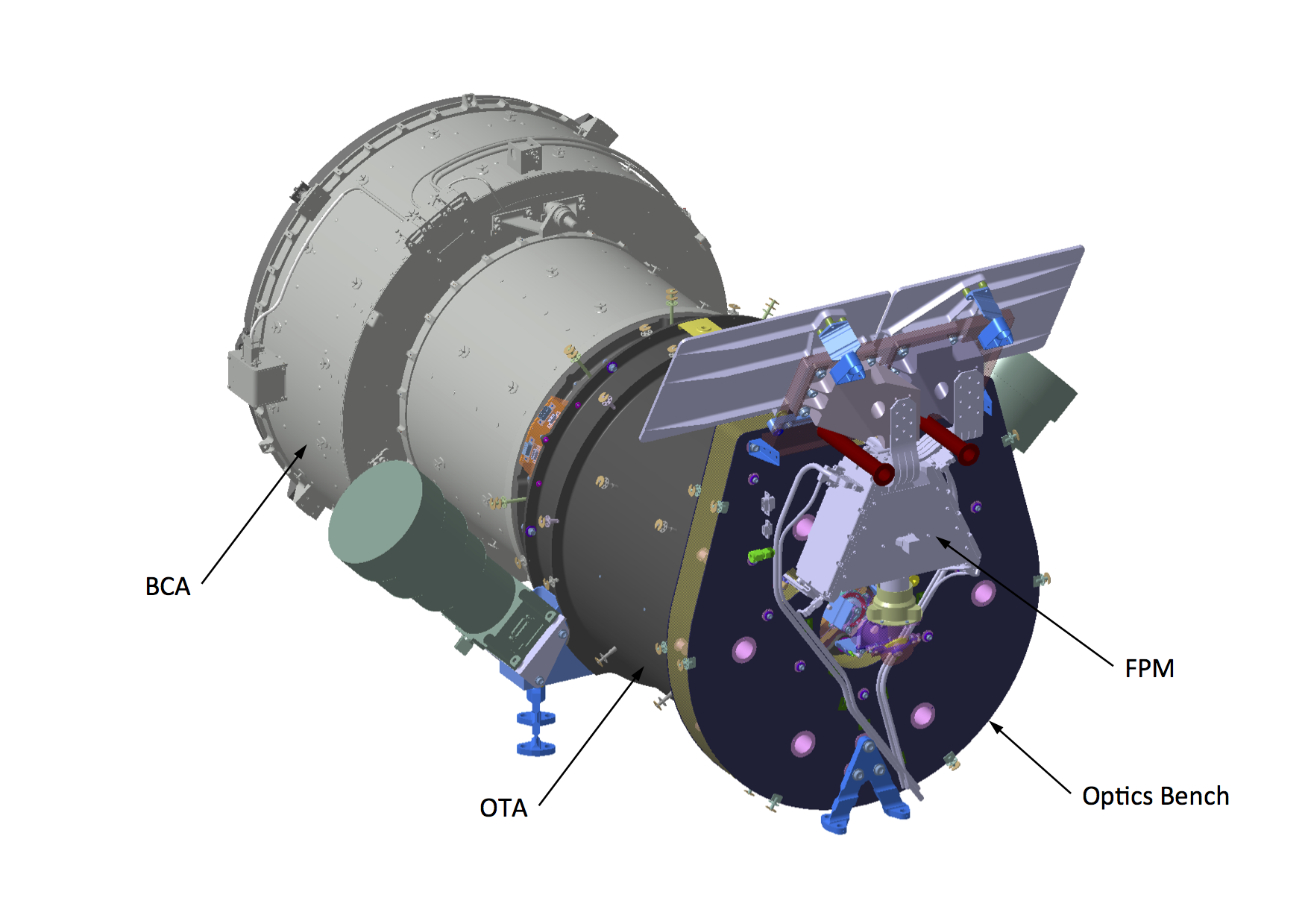 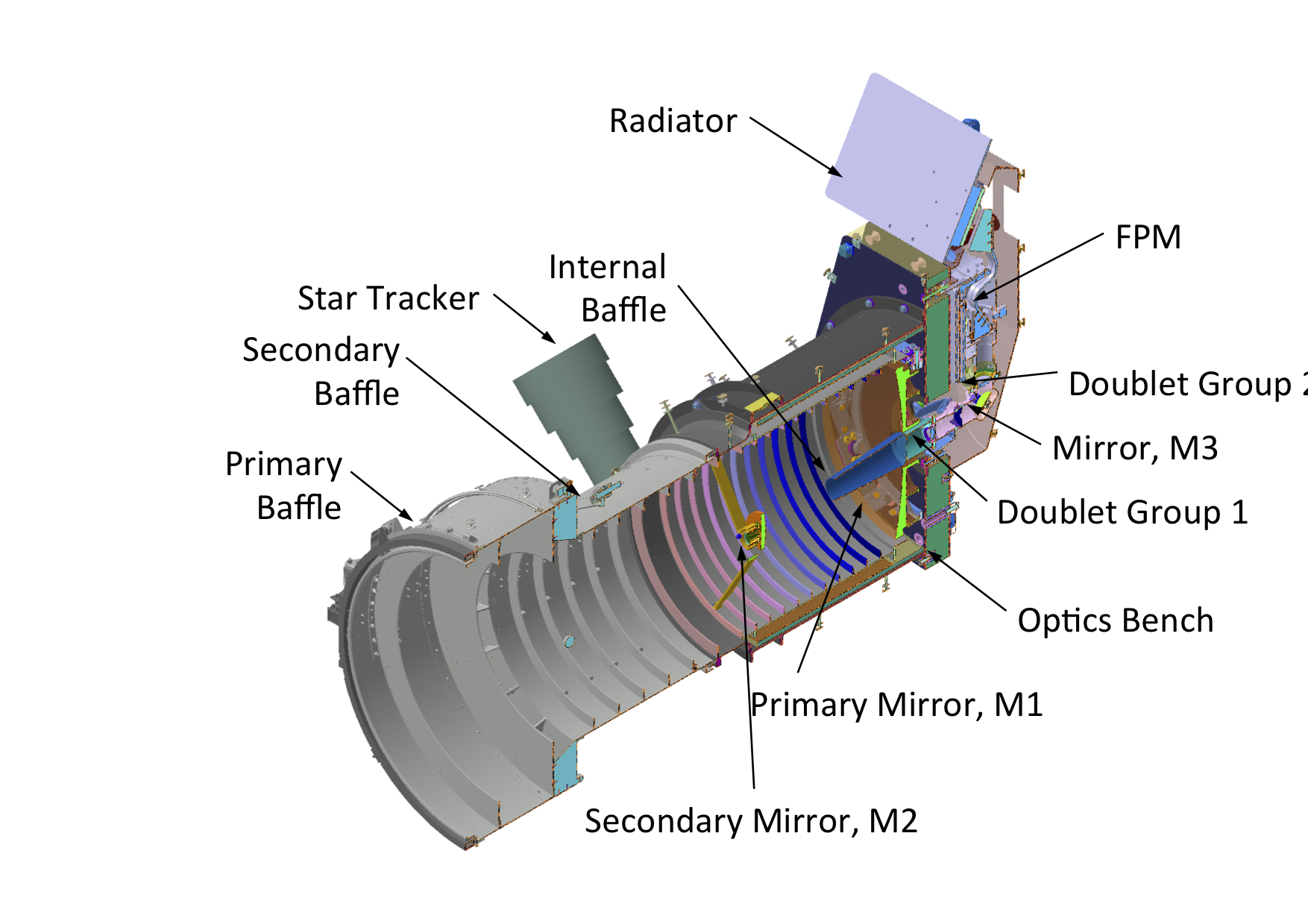 Figure 1: CAD/CAM views of the CHEOPS payload (Copyright CHEOPS Mission Consortium/(CMC)University of Bern) The total mass of the payload is just over 60 kg, and it consumes around 60 W during nominal operations.
The OTA:

The optics of CHEOPS have been designed for maximum compactness and straylight rejection (see Figures 2 and 3). A Back End Optics is used to reimage the focal plane of the Ritchey Chretian telescope on the CCD, and to provide an intermediate pupil at which a pupil mask is placed in order to reject straylight.
The entrance pupil is located at primary mirror, M1, and has a physical diameter of 320 mm. The 68 mm diameter secondary mirror, M2, obstructs M1, resulting in an effective collecting area equivalent to an unobstructed mirror of diameter 300 mm. The effective focal length and f-ratio of the telescope are 1600 mm (M1-M2 separation of 300 mm) and F/5 respectively. Both M1 and M2 are made of silver-coated Zerodur. The focal plane has a diagmeter of 8.954 mm, corresponding to a field of view of 0.32 degrees, with a plate scale of 1 arcsecond per 13 um CCD pixel. Internal baffles are used to further reduce straylight and to protect the BEO from the damaging effects of radiation in-orbit. The point spread function of the instrument is defoccussed  (radius 12.4 pixels, 90% encircled energy) to minmise susceptability to variations in photometric response caused by the combination of pointing jitter and very small differences in the flat-field response of the CHEOPS CCD. 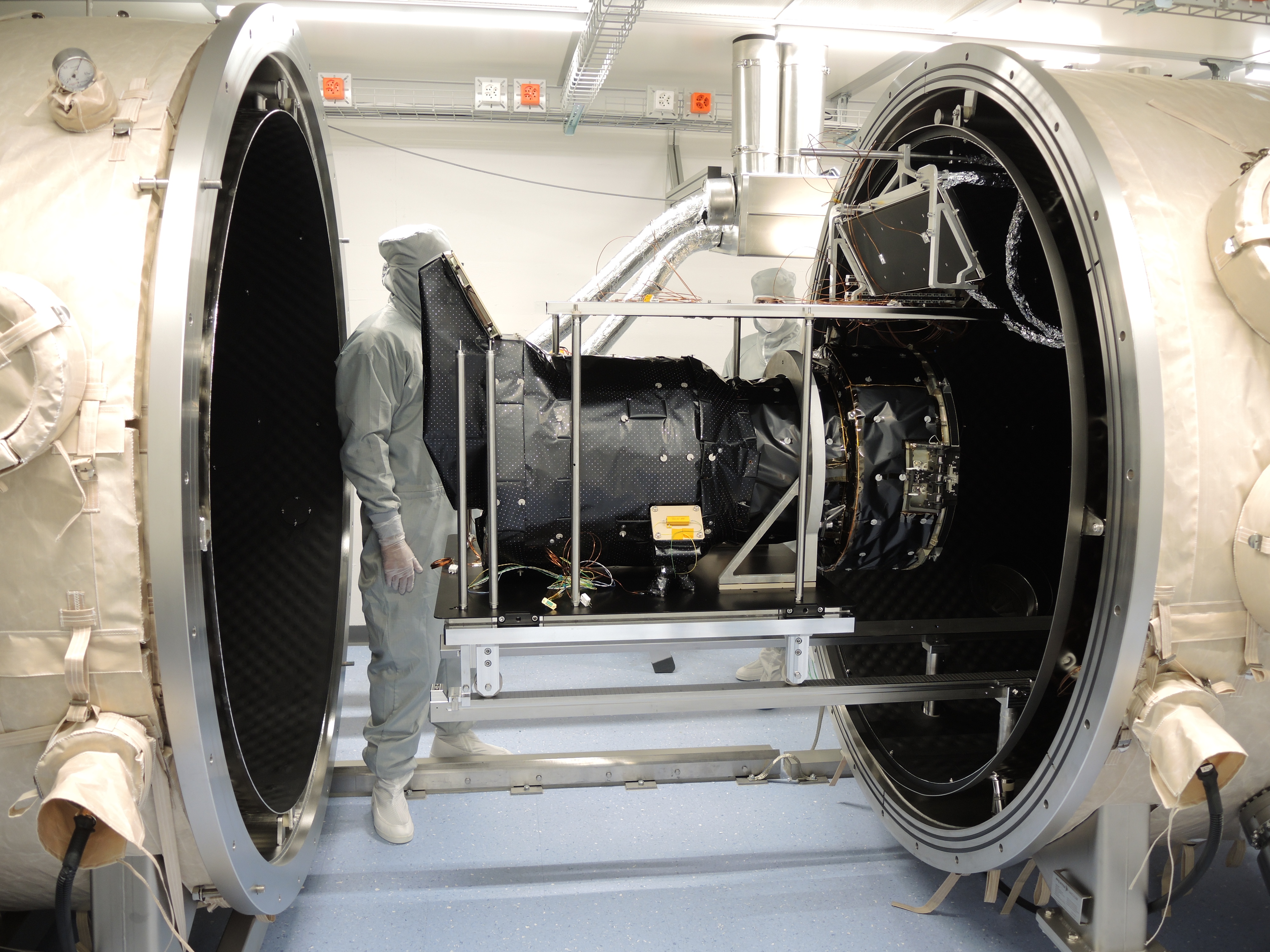 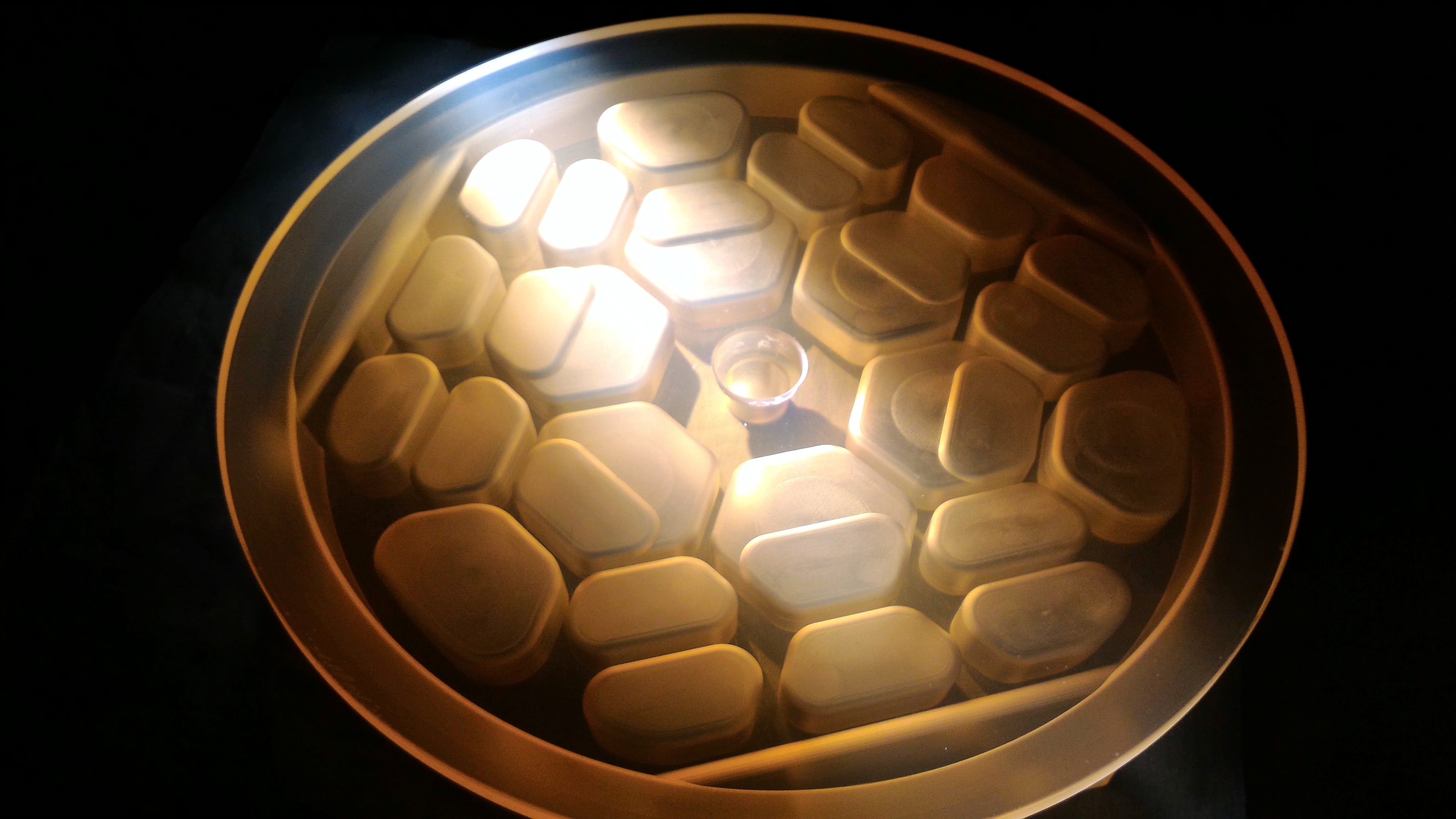 At the heart of the CHEOPS instrument is an e2V CCD47-20 detector - a 1k x 1k CCD (13um pixel size) with additional store area, which will operate in AIMO. The CCD will be passively cooled to 233 K (stable to 10mK) by a dedicated radiator. Two electrical modules interface, control and read-out the CCD - the FPM, which is located on the intsrument optical bench and the SEM which is located inside the platform (FIgure 4). The FPM also houses the Focal Plane Assembly, where the CCD is located, and the Front End Electronics (FEE) which have independent interfaces to the radiator to cool the units.
The SEM is connected to the FPM/FEE via an electrical harness, and contains the Sensor Control Unit, and the Power Conditioning unit which in turn interfaces with the Data Processing unit and the Power Supply Unit which are integrated in the Back End Electronics (BEE).

Achieving high gain stability of the analogue electronics over 48 hours is one of the key design drivers for the front end electronics. Extensive calibration together with housekeeping data will be used to account for temperature-dependent effects. The SEM and BEE are cold-redundant, as is the FPM, with the exception of the CCD, the CCD clock driver and the CCD bias voltage supply. 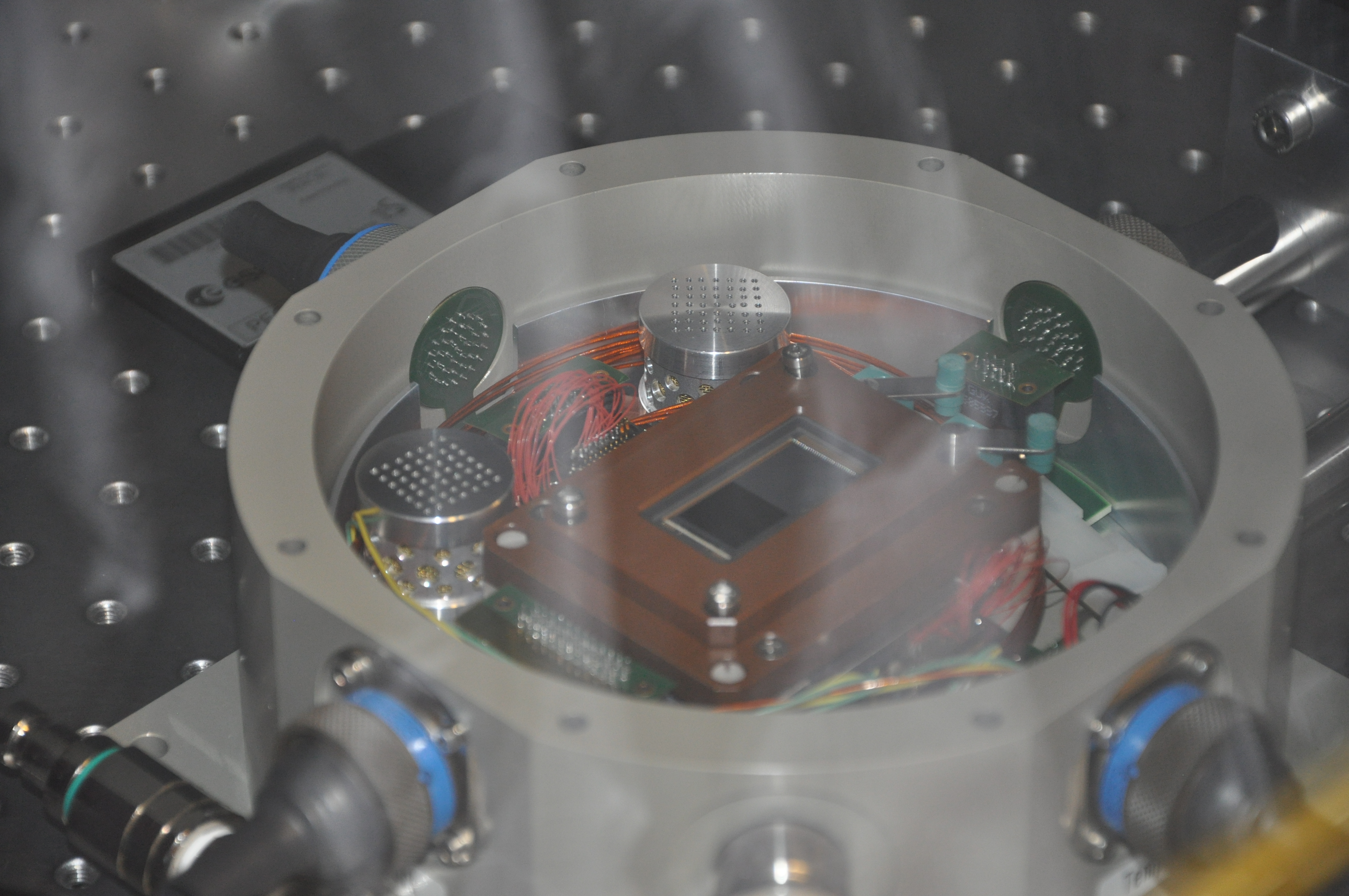 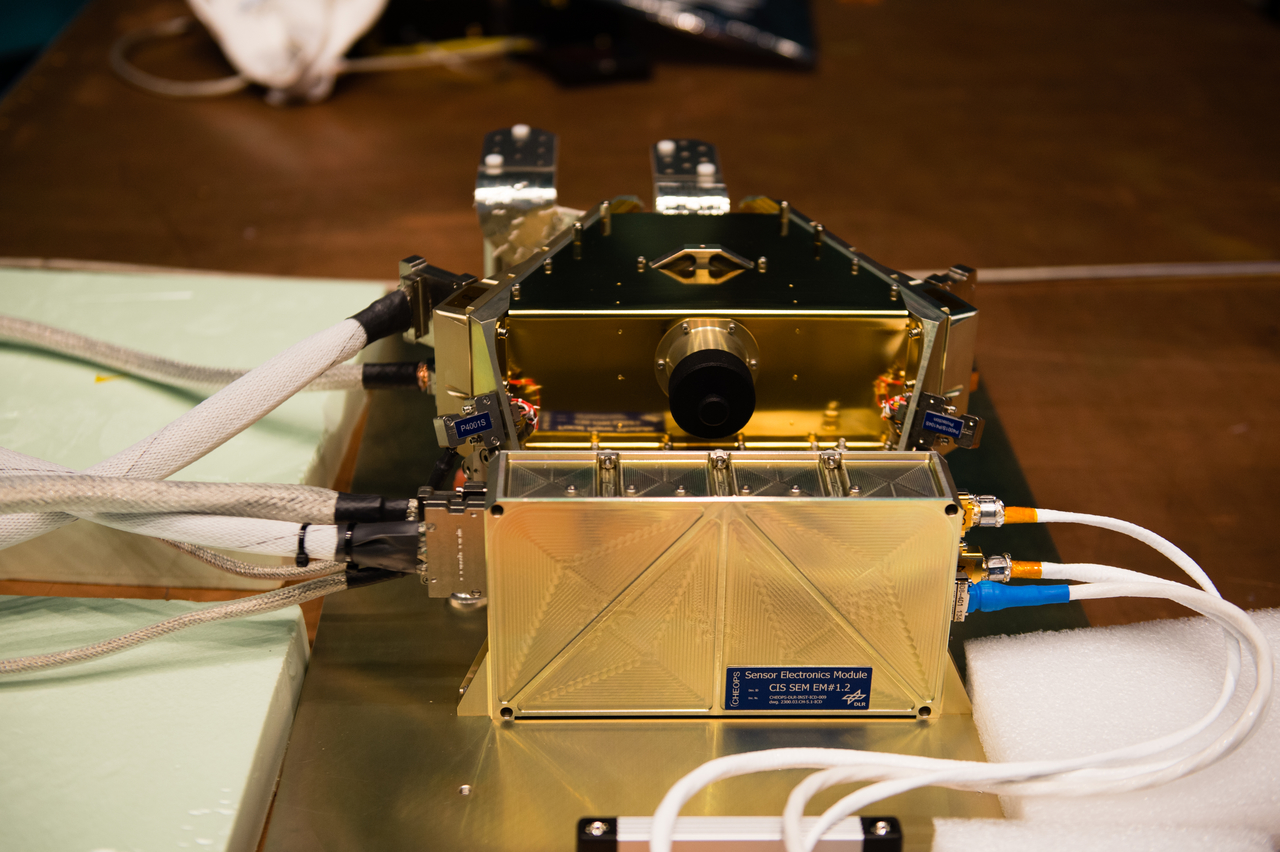 The BEE is made up of the Data Processing Unit (DPU) and the Power Supply and Distribution Unit (PSDU) (Figure 5). The main tasks of the DPU are to communicate with the CCD read-out electronics and to compress and package the telemetry data. The DPU will also compute the centroid of the stellar images which will be sent to the spacecraft Attitude Orbit Control System in order to achieve more accurate control of the spacecraft pointing.
The DPU has a memory capacity sufficient to allow the spacecraft to operate for 3 days without ground contact. 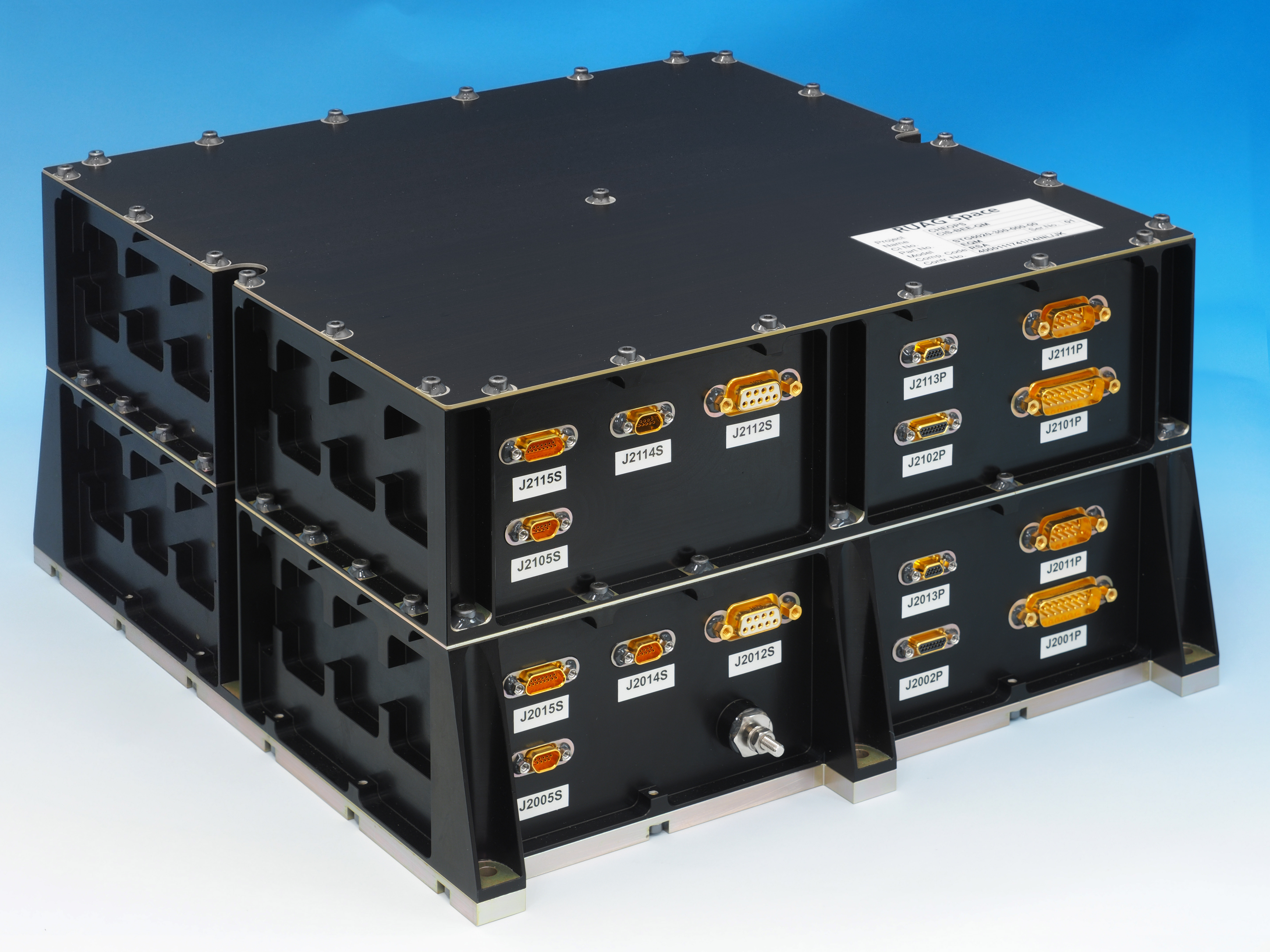 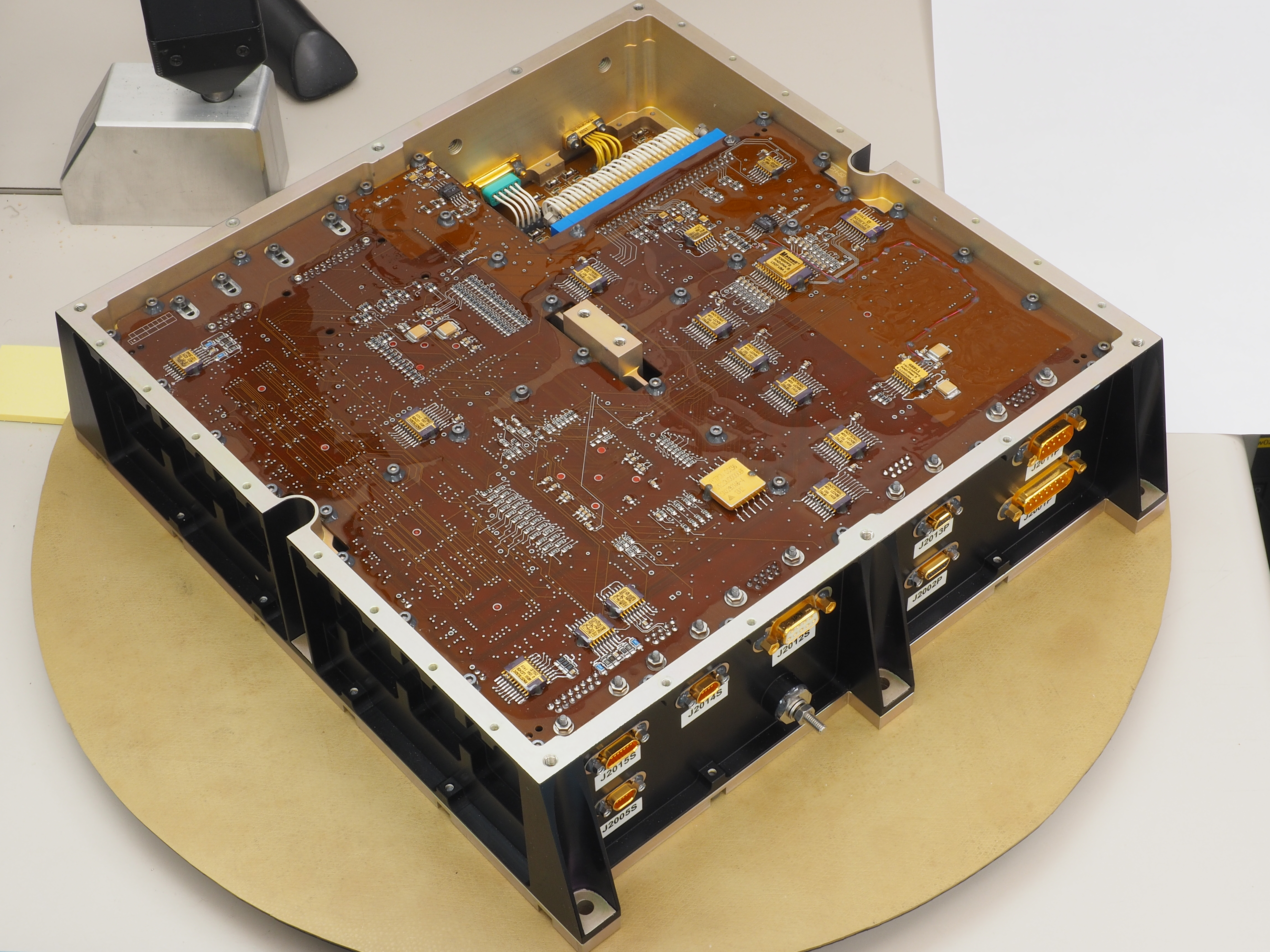 Figure 5: Photographs of the BEE box  (Left panel) and the insde of the PSDU (Right panel)  (Copyright: RUAG (Austria) and IWF)

Further details on the CHEOPS payload can be found at CHEOPS Consortium Mission website (http://cheops.unibe.ch) and in the references at this link