** AO-3 FOR OBSERVING TIME ON CHEOPS NOW OPEN - CLOSES MIDDAY GMT ON 15 MARCH 2022**
ESA uses cookies to track visits to our website only, no personal information is collected.
By continuing to use the site you are agreeing to our use of cookies. OK
Find out more about our cookie policy.

Where on the sky CHEOPS can observe at any given time is set by a combination of factors which include both hard constraints that are set to ensure the safety of the spacecraft and the payload, and soft constraints that are designed to ensure that contributions to the noise budget due to stray light are kept within limits. There will be directions for which observing will not be possible due to restrictions arising from the position in the sky of the Sun, Moon or the illuminated Earth relative to CHEOPS; in addition, there may be interruptions during parts of the spacecraft orbit resulting from occultation of the Line of Sight (LoS) to the target by the Earth, or due to excess radiation-induced noise during passage through the South Atlantic Anomaly.

The CHEOPS pointing constraints are shown in Figure 1. 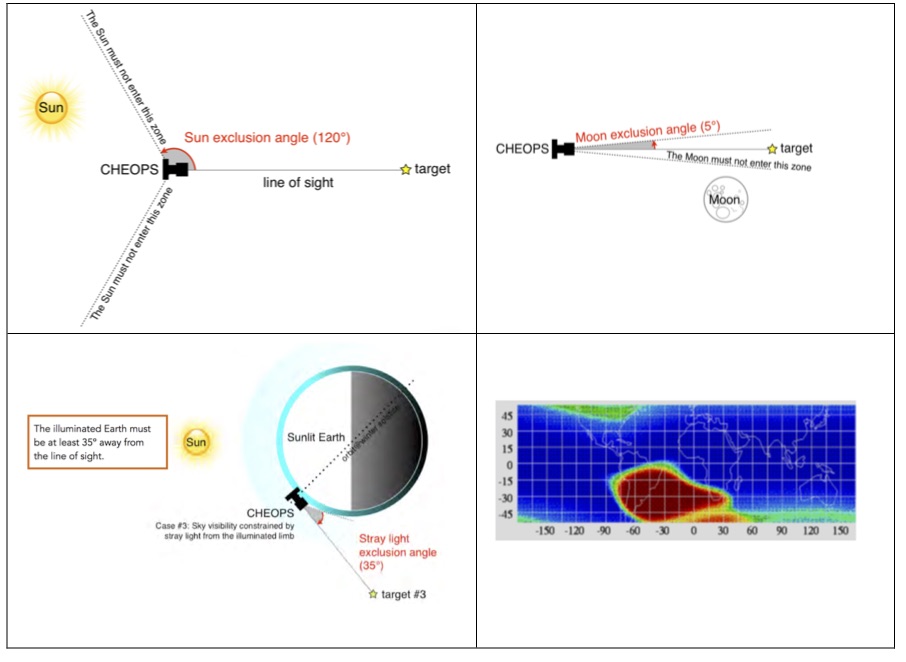 Figure 1: CHEOPS pointing constraints (a) Left upper panel:  During observations the Sun must be outside the cone around the line-of-sight (LoS) of the telescope which has a half-angle of 120 degrees – hard constraint;(b) Right Upper panel:  The bright moon must not be within a cone around the LoS of the telescope which has a half-angle of 5 degrees – soft constraint;(c) Left lower panel: the minimum angle allowed between the LoS and any visible part of the illuminated Earth limb shall be 35 degrees. This angle is referred to as the stray light exclusion angle. In practice, what is used is a cap to the contribution from Earth stray light to the CHEOPS noise budget, which translates to a minimum angle of around 25 degrees – soft constraint; (d) Right lower panel: The South Atlantic Anomaly (SAA) as observed by ROSAT (Low Earth Orbit, altitude 580 km). For observations to be valid, the maximum energetic particle flux at the detector due to passage of the spacecraft through the SAA shall be 2 particles / s / cm2 – soft constraint. In addition to the previously noted constraints, the target shall have a projected altitude from the surface of the Earth equal or higher than 100 km.

Depending on the science objectives behind a given observation, there can be a need to not only achieve a particular sensitivity or signal-to-noise, but also to be able observe a minimum fraction of a transit - for example, the fraction needed to just to detect a transit is less than that needed to determine the transit shape, ingress and egress. These needs are captured in the sky visibility requirements (will give link to Cosmos webpage on requirements) – for transit detection (brighter host star, smaller planets) the maximum % of interruptions allowed per orbit is 50%, whilst for characterization (fainter host star, slightly larger planets) a maximum of 20% is accepted.

The CHEOPS sky coverage has been simulated taking into account assumptions that are listed below:
•    that the Earth is a perfect sphere, with an albedo of 1;
•    that the spacecraft orbit has a local transit of the ascending node (LTAN) of 6am, an altitude of 700 km, and covers the year of 2018;
•    that no data is taken during either passage through the South Atlantic Anomaly (position and extent of which is derived using the ESA Spenvis tool1) or Earth occultations
•    that the angle between the Sun and the pointing direction/LoS is always greater than 120 degrees, designed to protect the instrument radiators from solar illumination (Figure 1a);
•    that the angle between the Moon and the pointing direction always exceeds 5 degrees (Figure 1b);
•    that the point source transmission (rejection) of the telescope/payload is based on:
-    a micro-roughness of 10Angstroms and 5Angstroms for primary mirror, M1, and secondary M2, M3 + the backend optics respectively;
-    a particulate contamination level of 300 ppm;
-    textbook values for the high emissivity/absorptance coatings used on the telescope baffles (internal, external primary and secondary), the backend optics mounting structure, M2 spider and the M1 mirror border;
•    that 99.6% of the Earth stray light contribution can be subtracted from CHEOPS images as part of on-ground post-processing.

For the purpose of simulations, the constraint on the Earth stray light exclusion angle noted in Figure 1 (> 35 degrees) is dropped in favour of a limit to the contribution by Earth stray light to the overall noise budget. In practice, given the high level of stray light rejection provided by the telescope baffle, this means that the angle between the LoS and the illuminated Earth angle can be as low as 25 degrees. The constraint on the Moon-pointing direction is dropped;

The simulations are described in more detail in http://adsabs.harvard.edu/abs/2014SPIE.9149E..0WK and http://cheops.unige.ch/files/2015/10/csw4_skycoverage_kuntzer.pdf. The results can be seen in Figure 2. The plots show, for each position on the sky, the cumulative number of days per year for which pointing constraints are met and for which the stray light contribution to the noise budget is less than or equal to 5 ppm/70 ppm for a magnitude V=9, G-type (Teff=5500K)/ V=12, K type (Teff=4500K) stars respectively. The fraction of each spacecraft orbit that is free from interruptions due to the SAA and Earth Occultation decreases from left to right (80%, 70%, 50%).

Figure 2:  Plots, as a function of pointing direction, of the cumulative number of days for which the contribution from Earth stray light to the noise budget is  ≤ 5 ppm /70 ppm for a V=9 G-type (Teff=5500K)/ V=12 K-type (Teff=4500K), and for which the maximum % of each spacecraft orbit that is free from interruptions due to Earth Occultation or passage through the South Atlantic Anomaly is 80%, 70%, 50%. The sinusoidal trajectory marks the locus of the Sun. Plots courtesy of Thibault Kuntzer EPFL, CH) and Andrea Fortier (UBE, CH)

Shown in Figure 3 is the instantaneous sky coverage on a selection of dates in 2018 for the case in which at least 50% of each spacecraft orbit included is free from interruptions. Note that year-on-year differences in coverage are negligible. 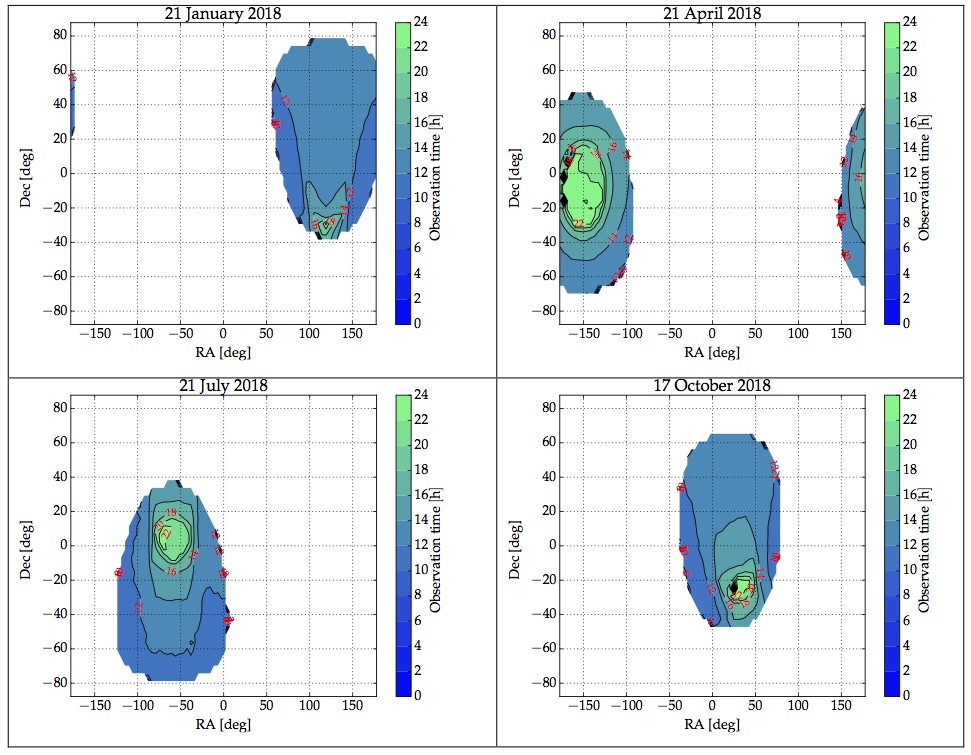