Have you ever wondered what’s out there in space? Now, thanks to Gaia EDR3, the solar neighbourhood has been mapped with great precision out to 100 pc (326 light years). This catalogue of stars is called the “Gaia Catalogue of Nearby Stars” and is described in a Gaia Collaboration paper that came out today.

The mapping of our neighbourhood has a long history. The first catalogue of measured parallaxes in our neighbourhood was published in 1957 by Wilhelm Gliese and contained 915 stars within 20 pc. Over time, the catalogue of nearby stars has grown, but the information was always a combination of data gathered by different instruments at various observatories. With the Gaia Catalogue of Nearby Stars (GCNS), a unique census of stars within 100 pc of our Sun is now available. It is more complete, covers a larger volume of space, and is far more homogeneous than any catalogue of nearby stars published before. 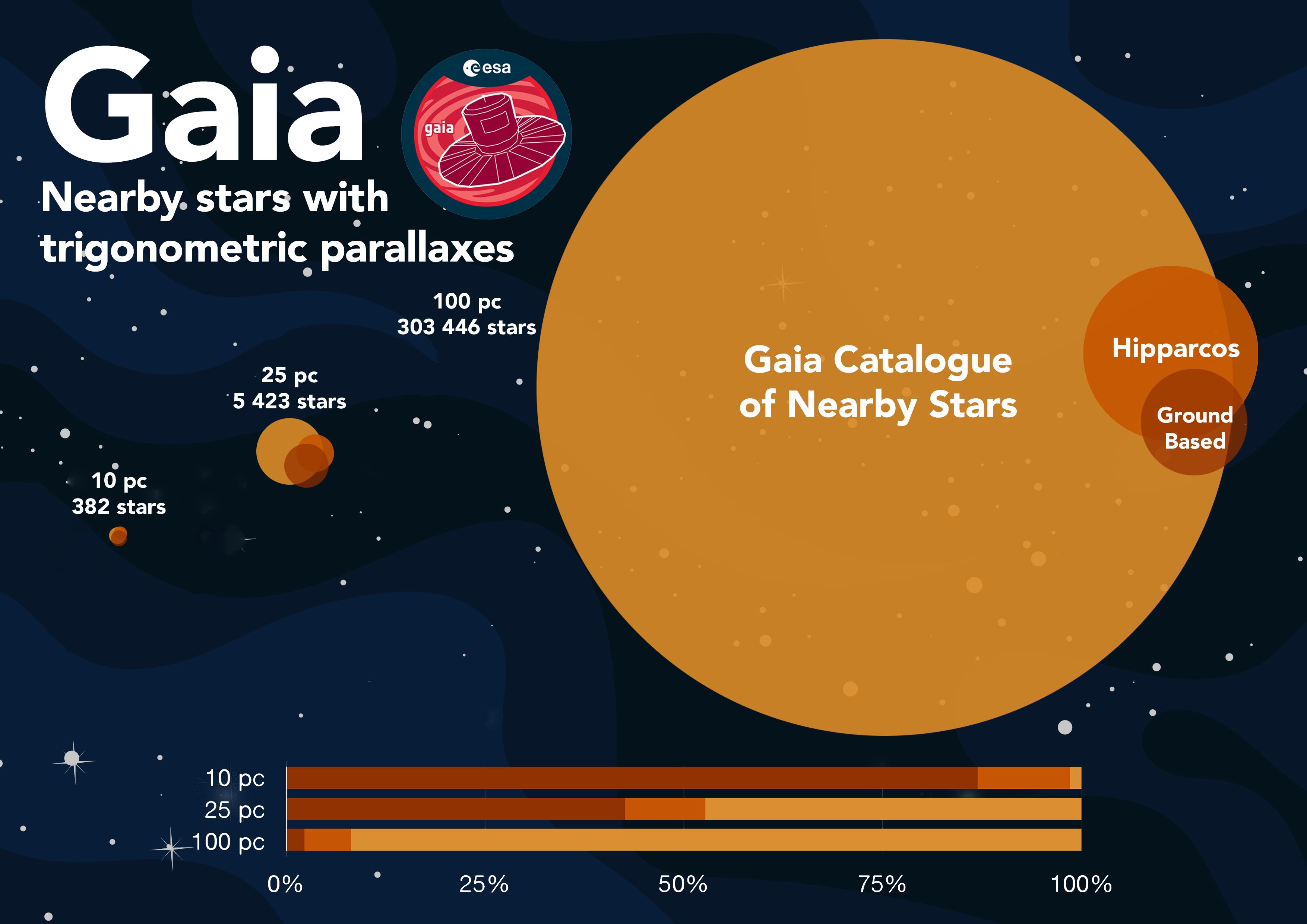 Figure 1: The Gaia Catalogue of Nearby Stars (GCNS) compared to previous compilations. Represented is the number of nearby stars with trigonometric parallaxes within 10 pc, 25 pc and 100 pc. The colours are representative for the catalogue (dark brown for ground-based observatories, medium brown for the ESA Hipparcos catalogue, and light brown for the Gaia GCNS). The area of the circles is proportional to the number of stars. The circles overlap when the stars appear in both or in all three catalogues. Gaia has completed the census by a factor of about 2 within 25 pc and 10 within 100 pc. An examination of the 10 pc sample finds that GCNS provide the first direct parallax of five stars in multiple systems. Image credit: ESA/Gaia/DPAC - CC BY-SA 3.0 IGO

Compared to the full Milky Way, the GCNS bubble of 100 pc is tiny. So why concentrate on the sample of stars around us and out to this specific distance? At a distance of about 100 pc, the coolest stars become too faint for Gaia’s survey limit, so to get a complete census of stars (including the coolest ones), this choice was made.

Though these are the faintest and coolest objects near the Sun, many new ultra-cool dwarf candidates have been found with Gaia EDR3. An overview of the improvement is given in Figure 2.

Figure 2: The new ultra-cool dwarfs found in the GCNS using Gaia EDR3 are shown in red, and the known ones are represented in blue. On the horizontal axis, the distance from the Sun is shown. The further from the Sun, the more new candidates have been found. Image credit: Gaia Collaboration, R. Smart, et al. A&A 2020

In the video below, one can experience a virtual tour through the Solar neighbourhood. A large variety of objects is seen in the sample, from large clusters of stars to isolated binary stars moving together through space. Near the end of the video, the full sample is shown in comparison to our Galaxy.

Visualisation 1: A virtual tour through the Gaia Catalogue of Nearby Stars. The observer flies through this region while positions, motions, and colours of the more than 300 thousand catalogued stars are highlighted. An overview is given of the sample with respect to the Milky Way. Credit: ESA/Gaia/DPAC - CC BY-SA 3.0 IGO

Two star clusters are located in the Solar neighbourhood. The Hyades cluster contains stars born more than 600 million years ago. The second cluster, Coma Berenices, is about 500 million years old. Both clusters stand out clearly when mapping the star density, as is clearly seen from Figure 3.

Figure 3: Star density maps of the Gaia Catalogue of Nearby Stars. The Sun is located at the centre of both maps. The regions with higher density of stars are shown; these correspond with known star clusters (Hyades and Coma Berenices) and moving groups. On the left, a top view of the sample is shown (as observed from far above the Galactic plane) and on the right a side view is provided. Download here a high-resolution poster of these star density maps. Credit: ESA/Gaia/DPAC - CC BY-SA 3.0 IGO

For the Hyades cluster, one sees, apart from the dense concentration of objects at the core of the cluster, clearly the two tidal tails, with a deviation in the trailing tail compared to simulations. A new list of candidate members was produced for the Hyades cluster which is in full agreement with earlier work based on Gaia DR2 and with expectations. 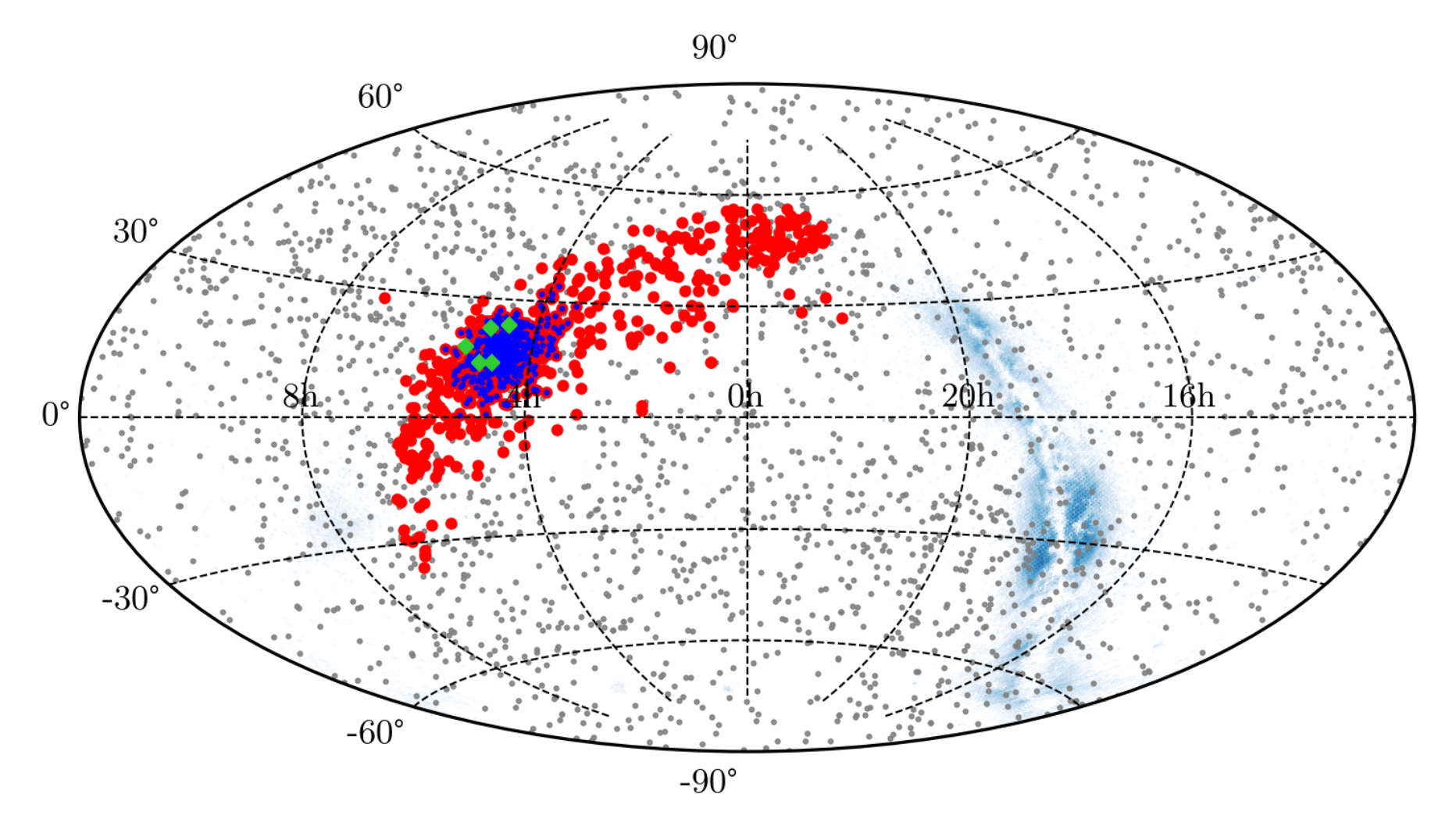 Figure 4: On this sky projection, the candidate members of the Hyades cluster are presented (in equatorial coordinates). The red dots are the 920 candidate members, after density filtering that has been applied to bring out the classical cluster and its tidal tails. Image credit: Gaia Collaboration, R. Smart, et al. A&A 2020.

When binning the stars in the Gaia Catalogue of Nearby Stars in magnitude, a distribution is found as shown in Figure 5. This distribution shows the boundary between stars and substellar objects. Substellar objects – sometimes called brown dwarfs – are objects that are below the hydrogen-burning limit and hence cannot become a star. They are extremely important for the study of the formation of small objects, including planets. 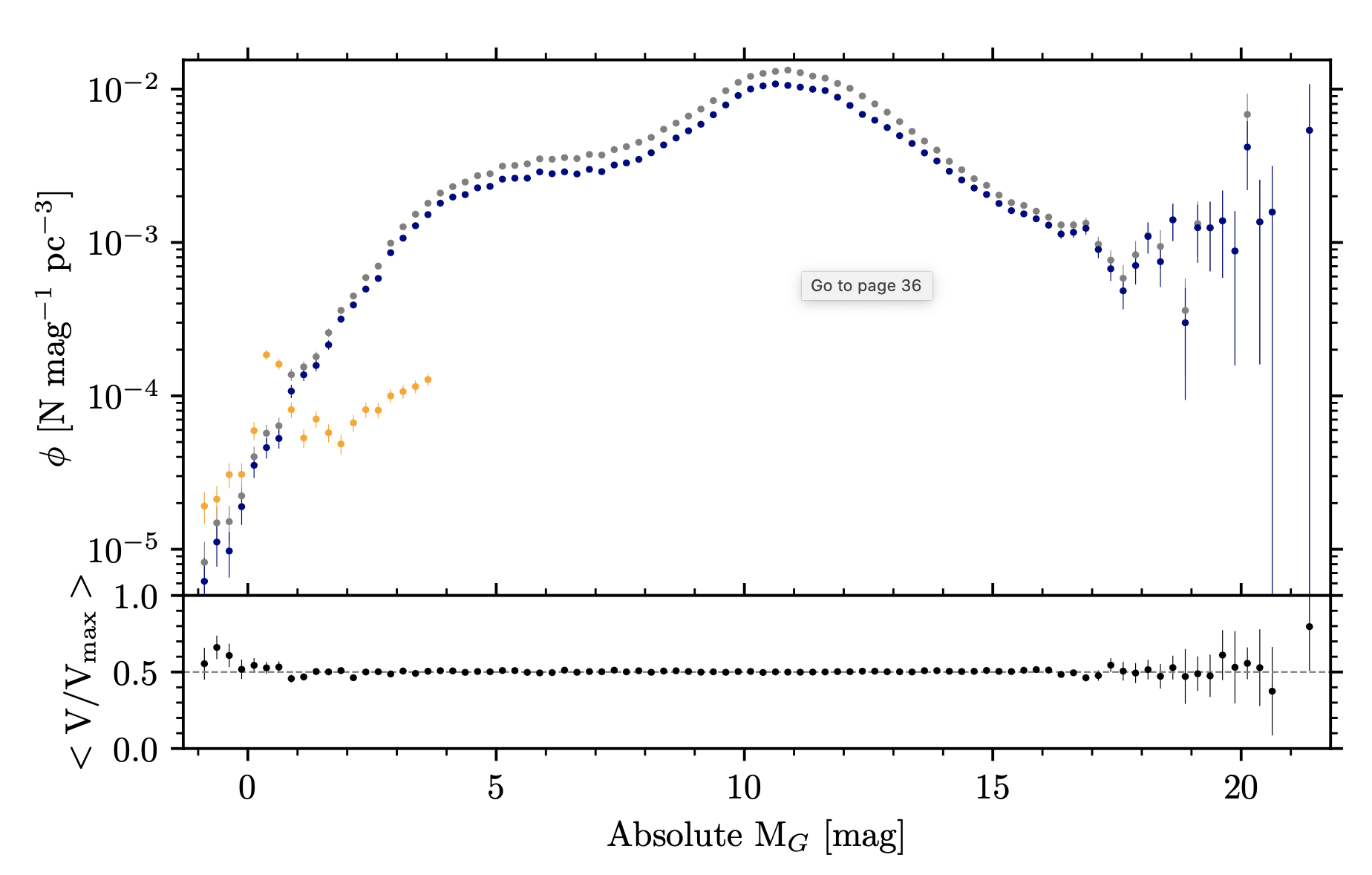 A complete and homogeneous sample such as the Gaia Catalogue of Nearby Stars is also important to study the Galaxy, and more specifically the kinematics of stars. Orbits were computed for a subsample of 74,281 stars. These are the stars for which radial velocities are available, next to the motion across the sky (proper motion), meaning their motion is measured in three dimensions.

Also in this local sample, effects are seen from, for instance, several streams. Some of the stars show peculiar motions, different from the near-circular motion of the Sun around the centre of the Galaxy, which reveals that these objects come from either the inner regions of the Galaxy or from external objects such as, for example, Gaia-Enceladus.

The solar motion with respect to the local standard of rest (LSR) has also been investigated by the Gaia Collaboration. In particular the azimuthal value (V) is a much-debated number with previously measured values ranging from 1 to 21 km/s. The proposed value following a brief investigation in this paper is 7 km/s.

Visualisation 2: This animation shows the orbits of a subsample of 74,281 stars from the Gaia Catalogue of Nearby Stars.

These orbits were computed taking into account the gravitational potential of the Milky Way, but excluding the gravitational effect between the stars themselves. At the start, one sees the 100pc sphere around the Sun superimposed onto an artistic view of the Milky Way. The field of view is about 100,000 light-years wide. The motion of stars is shown over a time interval of 500 Myr.

Most of the stars have disk-like orbits, similar to the Sun, with small eccentricity and close to the Galactic plane. However, the solar neighbourhood is also visited by stars from the halo (red dots, with larger eccentricities, and going in the outer parts of the Galaxy, away from the Galactic plane) and stars coming from/going to the inner parts of the Galaxy (yellow dots). The Hyades and Coma Berenices star clusters are also clearly visible as small clumps (blue dots). Large-scale features rapidly appear (also seen as "lines" in the side view). They are related to substructures visible today in the kinematic plane. Having similar velocities, the stars from these substructures are diluted in space with time but share similar orbits.

After about 130 Myr, all the stars of moderate eccentricity again reach exactly the same galactocentric distance at which they started. Because their orbital periods are different, they do not meet exactly after one such period (radial libration period), but are stretched out in longitude. In the long run, this effect leads the stars to form a long ribbon that eventually winds itself all the way around the Galaxy. This is the same mechanism that produces meteor streams in the Solar System and tidal tails of Galactic star clusters.

Figure 3: These images were created by Kevin Jardine (@galaxy_map on twitter), with help on the bandwidth selection from Ronald Drimmel. The data used for this visualisation was provided by the authors of the paper: Gaia Early Data Release 3: the Gaia Catalogue of Nearby Stars, by Gaia Collaboration, R.L. Smart, et al. 2020 A&A.

Video 1: Made by Stefan Jordan and Toni Sagristà with Gaia Sky (http://www.zah.uni-heidelberg.de/gaia/outreach/gaiasky). Based on the paper by Gaia Collaboration, Smart et al. "Gaia Early Data Release 3: the Gaia Catalogue of Nearby Stars", A&A 2020.