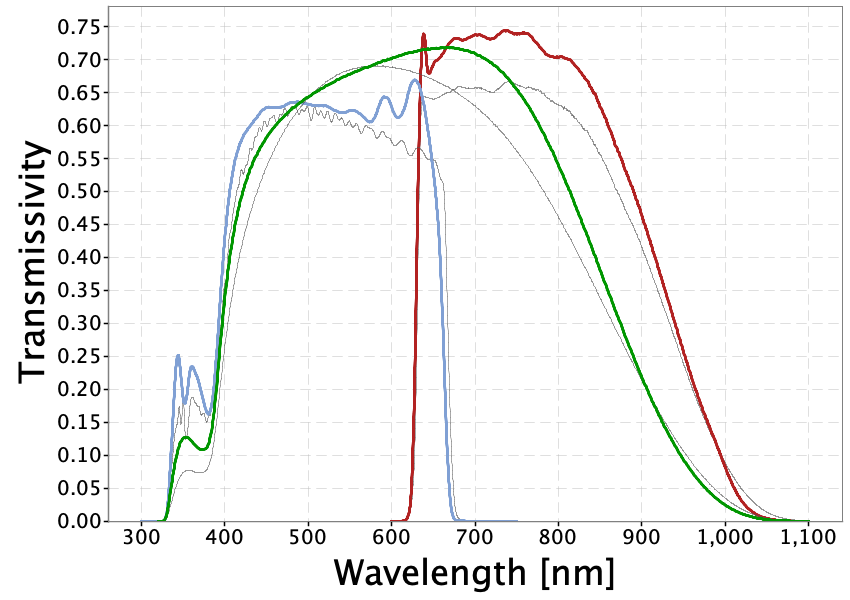 Due to the complexity and extraordinary accuracy of Gaia photometric measurements, the calibration of most instrumental effects needs to rely uniquely on internal data. This generates a photometric system corresponding to an average instrument that needs to be linked to the absolute system via an ad hoc calibration. This fundamental step in the Gaia data processing is referred to as the photometric external calibration.

It is important to understand that due to the cyclic processing of the Gaia data leading to the publication of better and more complete releases, the internal average instrument generated at each cycle is different. This implies that any comparison of passbands derived for different releases is meaningless.

The result of the photometric external calibration is the definition of a set of passbands (one per band or instrument G, G_BP and G_RP) that describe the combined effect of filter (and prisms in the Gaia BP/RP case), transmission, optical path and detector quantum efficiency as a function of wavelength and additional features introduced by the processing of the data. Once the passband is available, zero points converting internal fluxes to absolute magnitudes can be derived and it becomes possible to generate synthetic photometry in the Gaia photometric system from any known SED (either modelled or measured with other instruments).

In principle, by comparing the observed photometry of an arbitrarily large set of sources with well-known spectral energy distributions (SEDs) with the synthetic photometry obtained assuming some mathematical model for the passband, it should be possible to infer the true shape of the passband. However, in practice, any such set of spectrophotometric calibrators will only represent a subspace of all possible SED shapes because of its limited size but mostly because there are classes of astrophysical objects that are intrinsically variable and hence cannot be used as calibrators. This implies that only a subset of model components are constrained by such set of calibrators leaving others completely unconstrained (Weiler 2018). This limitation affected the determination of the Gaia DR2 passbands that relied uniquely on the set of Spectro-Photometric Standard Sources (SPSS, Pancino et al. 2012, Altavilla et al. 2015, Marinoni et al. 2016) as calibrators. As a result, several sets of passbands were produced using different sets of calibrators: two different sets in Evans et al. (2018), others in Weiler (2018) and Maíz Apellániz & Weiler (2018), all providing minimal changes in the SPSS residuals between observed and synthetic photometry.

To mitigate this limitation, for Gaia EDR3 a much larger set of auxiliary calibrators (approximately 100K) covering a wide range in stellar types was employed to firmly tie the photometric external calibration to the BP/RP spectra. These were converted to the absolute system to provide SEDs for the large set of auxiliary calibrators. The external calibration of the BP/RP spectral data was still based mostly on the SPSS data thus ensuring a solid absolute flux scale, but also relied on other types of sources, featuring strong emission lines in the BP/RP spectral range, to further constrain most model components. A more comprehensive description of the photometric and spectral external calibrations will be published in Riello et al. (2020, the paper presenting the EDR3 photometry) and Montegriffo et al. (in preparation, a paper entirely dedicated to the external calibration of the BP/RP spectra). The passbands are shown in the figure above as green, blue, and red solid lines for the G, G_BP, and G_RP bands, respectively. The thin grey lines show the nominal, pre-launch passbands published in Jordi et al. 2010.

The Gaia EDR3 passband data has been provided to you by Coordination Unit 5 of the Gaia Data Processing and Analysis Consortium. Please realise that small corrections might still be added to the README document. With the release of Gaia EDR3 on 3 December 2020, also the processing papers and the data release documentation will be published. These should be considered from then onwards the most important reference information for the Gaia EDR3 passbands data.