Venus atmospheric investigations will be enabled by Bepicolombo through the unique geometry of its flybys, at which time close-up Venus atmosphere observations will be completed. The 2020 and 2021 BepiColombo close encounter Venus observation campaigns will build previous successful Venus flybys completed by Mariner, Galileo, and MESSENGER. Three instruments onboard BepiColombo will target the atmosphere around the time of closest approach; the mid-infrared spectrometer and radiometer (MERTIS) and the UV spectrometer (PHEBUS) and the neutron spectrometer (MGNS).

BepiColombo will also complete Venus atmospheric observation campaigns from a far distance, during which times both MERTIS and PHEBUS will observe Venus as an exoplanet.

The scientific outputs of BepiColombo's close encounter and far-away Venus observations campaigns are expected to be reinforced significantly by coordinating with JAXA's Venus Orbiter, Akatsuki (2015-current), and a number of Earth-based telescopes (operating from space and on the ground). Overlapped or complementary viewing geometries from the three locations of BepiColombo, Akatsuki and Earth will result in complete global (day and nightside) views of the atmosphere, across multiple atmospheric levels simultaneously. Additionally, the BepiColombo’s multi spectral observations and broad spatial (and diurnal) coverage ranges will be highly synergistic with the on-going long-term Venus atmosphere monitoring that is being completed by the JAXA Akatsuki spacecraft and Earth-based telescopes.

The synergy among the three different observation vantage points (Bepi, Akatsuki and Earth) will allow to study:

The following image shows the timeline of BepiColombo atmospheric investigations together with the coordinated observations: 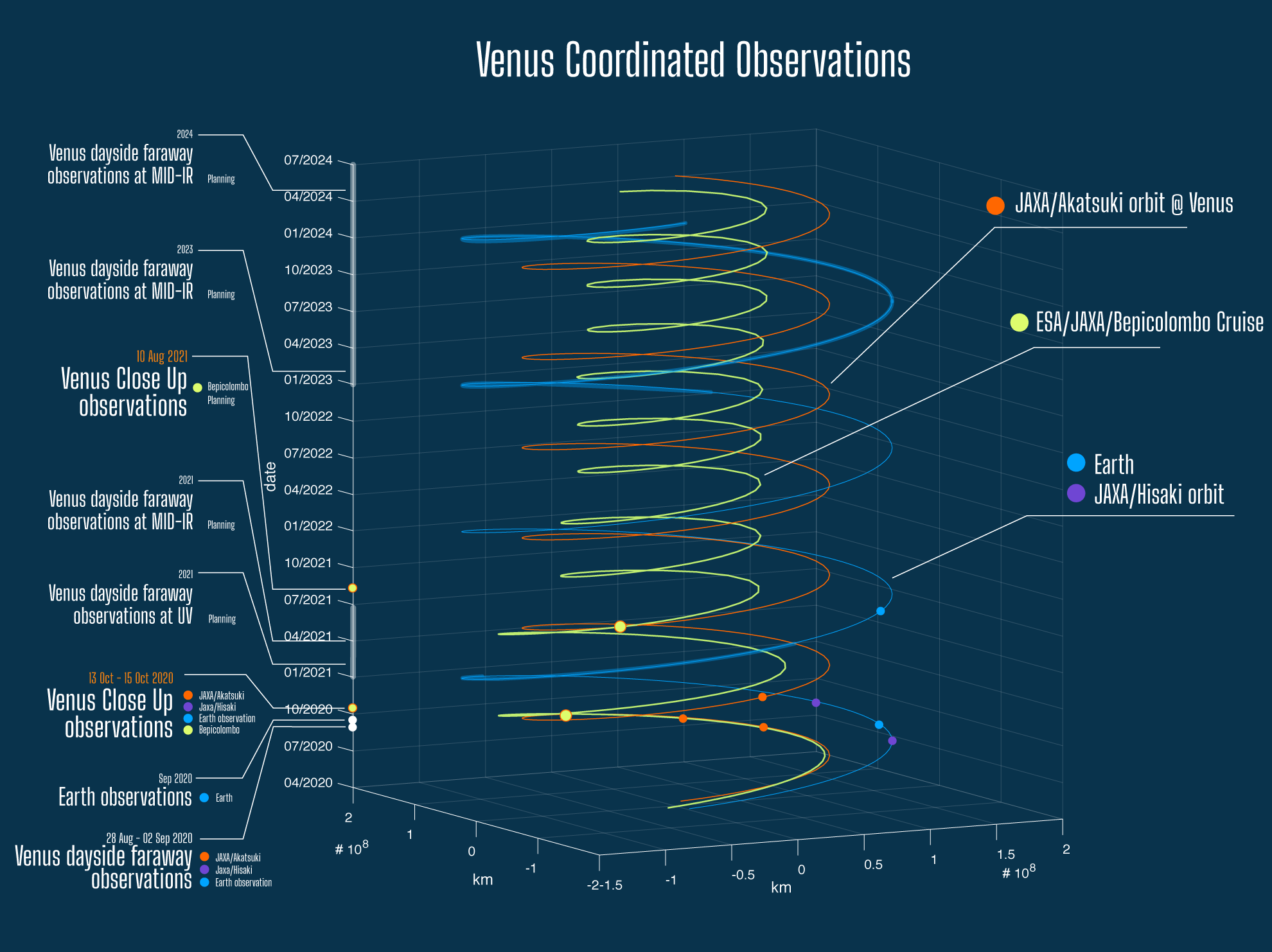 The instruments onboard BepiColombo that will investigate the atmosphere are MERTIS, PHEBUS and MGNS. A summary of their observations is shown in the table below:

The Venus dayside observation campaign with BepiColombo’s UV spectrometer PHEBUS has been conducted successfully. On 28 Aug – 2 Sep BepiColombo was at the 0.3 AU distance from the planet, and PHEBUS captured the entire dayside of Venus over the 145-315 nm wavelengths (Fig. 2). This observation was tightly coordinated with two other spacecraft, JAXA’s Venus orbiter Akatsuki and JAXA’s Earth orbiting space-based telescope Hisaki, and 6 ground-based telescopes in Spain, Turkey, and Czech Republic (CAHA1.23, CAHA2.2, CAHA3.5, T100, STELLA, Pereks telescope) (Fig.1). Total 9 facilities from space and from the ground aimed Venus dayside simultaneously and covered a broad spectral range from UV to NIR (52-1,000 nm). The data will reveal the current weather on Venus, focusing on variable solar energy absorption across the observed wavelength, and tracking volcanic activity related trace gases (such as SO2) and global scale atmospheric waves. 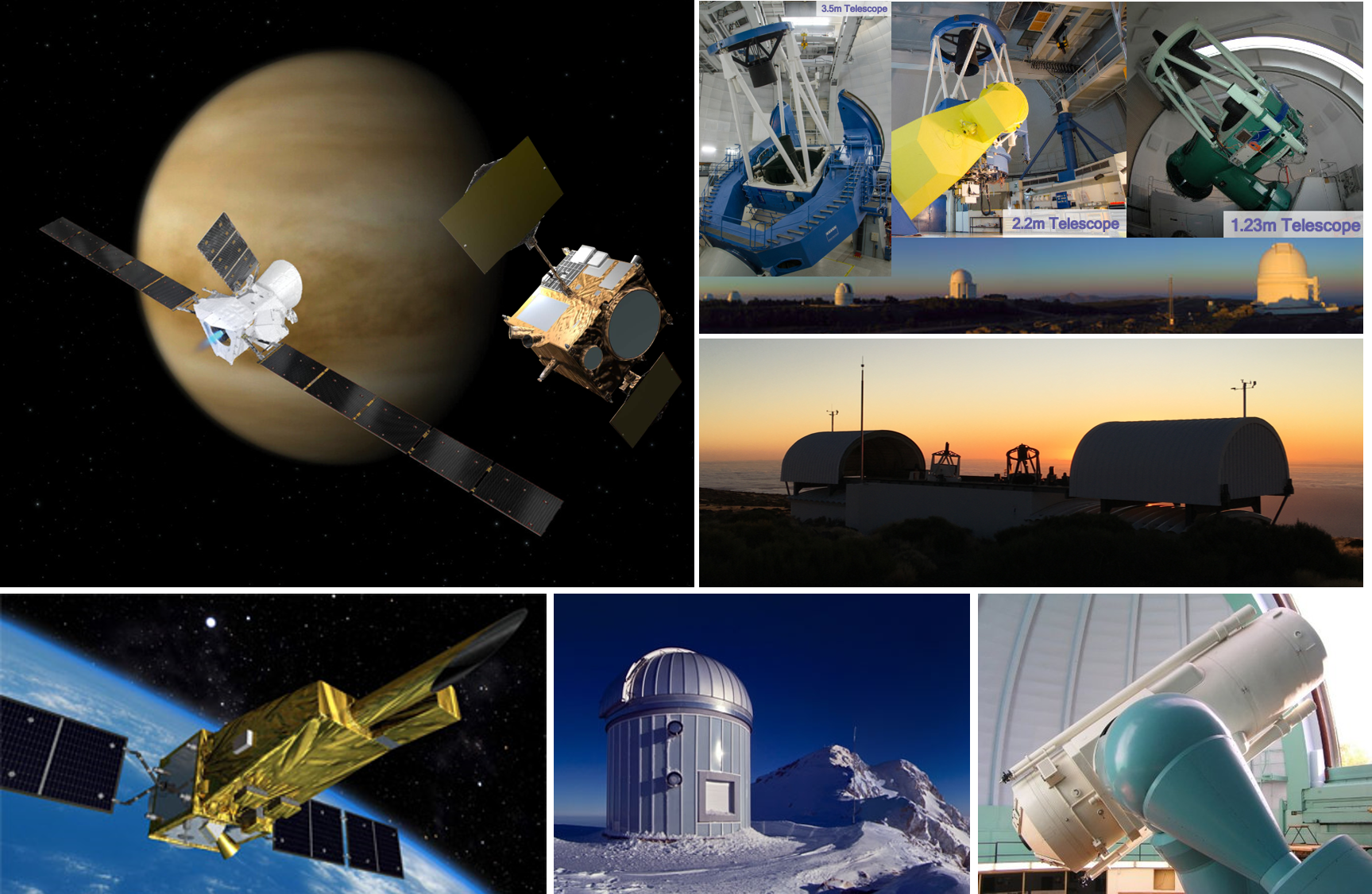 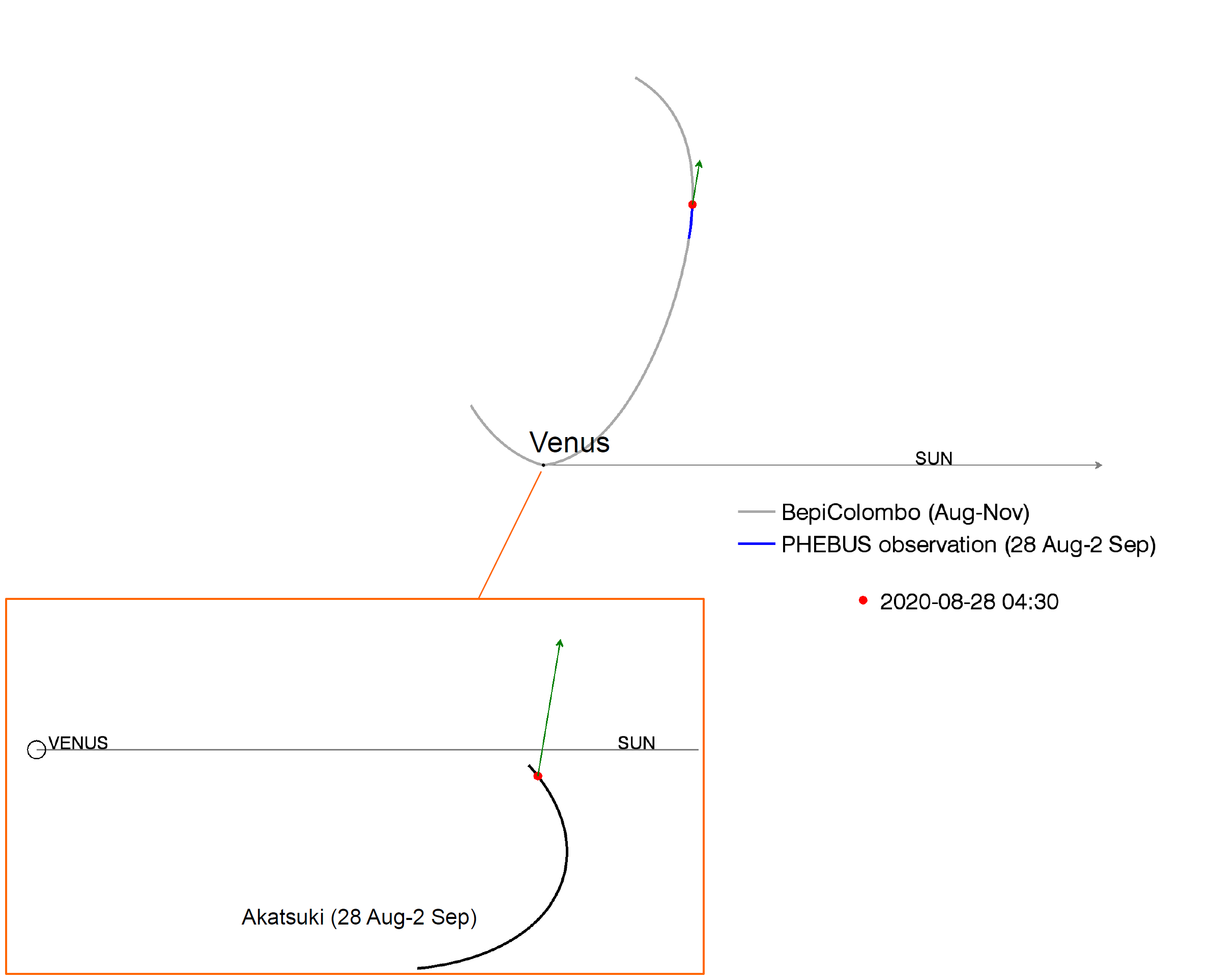 Figure 2. The relative location of BepiColombo (blue, upper panel) and Akatsuki (black, enlarged panel) from Venus during the campaign period. Red dots indicate their locations at 28 Aug 2020 04:30 UT. PHEBUS is at ~0.3 AU distance from Venus, and Akatsuki at ~340,000 km distance. The green arrow indicates the direction towards the Earth, and the right side is assigned to the Solar direction.

Ground-Based Observations Complementary to the Far Away Campaign

In addition to the amateur observations, during the far-away campaign, contemporaneous ground-based observations were completed by Dr. Pedro Machado et al. at Institute of Astrophysics and Space Sciences, Portugal focusing on the measurement of Venus’ upper cloud wind speeds (using the TNG/HARPS-N). Additionally, observations of Venus in the near IR (2-5 µm) were obtained at NASA’s Infrared Telescope Facility (IRTF); these observations were obtained by Drs. Eliot Young and Kandis-Lea Jessup of the Southwest Research Institute, Boulder CO, USA. The 2-3 µm data is sensitive to Venus’ cloud motions, vertical mixing and weather patterns within Venus’ lower cloud layer, as well as the lower atmosphere (30-45 km) gas abundances. The 4-5 µm data is sensitive to Venus’ day and nightside thermal signature including the high latitude “cold collar” and the polar “hot dipoles”. In total, the data obtained from the spacecraft and ground-based observations (both amateur and professional) will reveal links between weather patterns/mixing processes across a broad altitude region, the mechanisms linked to the vertical and zonal propagation of global scale atmospheric waves, as well as the impact of dynamical and chemical processes on the vertical and latitudinal distributions of trace gases within Venus’ atmosphere. These results will be highly synergistic with the BepiColombo/PHEBUS and Akatsuki/UVI traces of the energy deposited directly to the cloud tops via the absorption of UV solar flux. These coordinated observing efforts will promote an understanding of how Venus’ energy intake drives climate and weather. 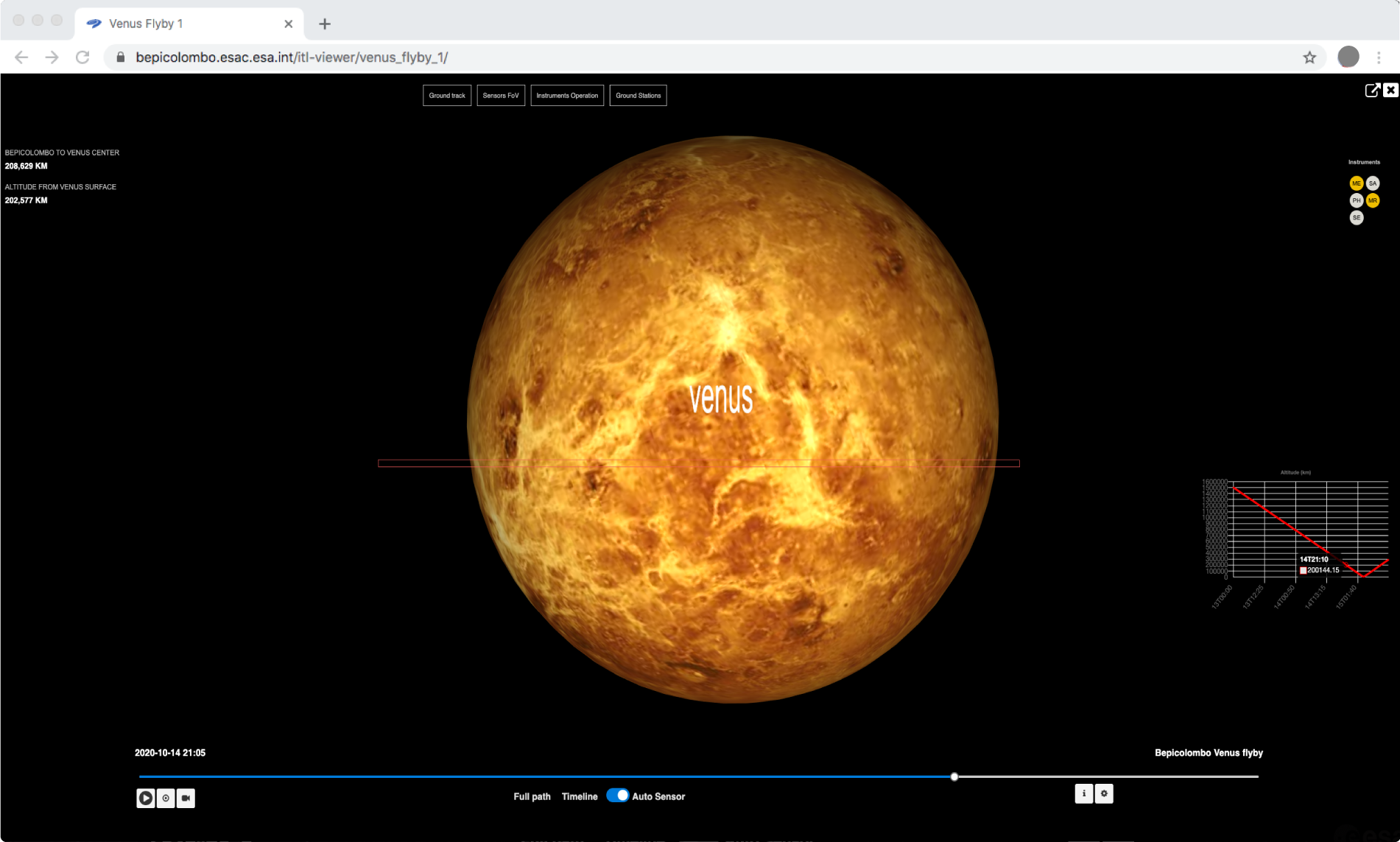 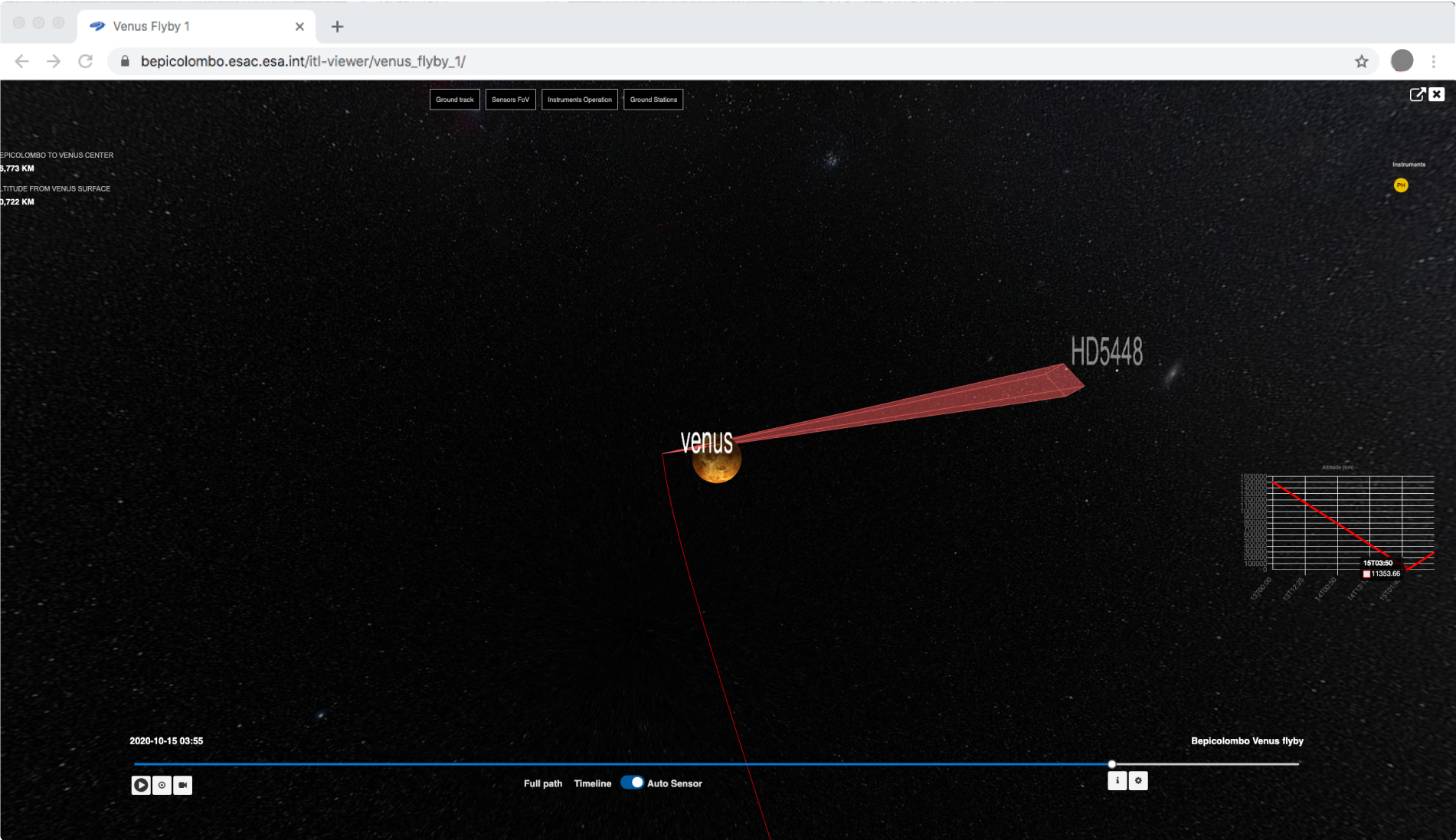 BepiColombo’s closest approach (CA) to Venus is on 03:58 UT 15 Oct 2020, passing the 10,660 km altitude from the surface of the planet. This will be a unique chance to detect details of the atmosphere, after past Venus flybys of Mariner, Galileo, and MESSENGER. Two instruments among 11 active instruments will obtain neutral atmospheric data; MERTIS and PHEBUS. The MERTIS instrument will begin taking near continuous observations of Venus about two days prior to closest approach at 21 UT on 12 Oct. MERTIS will continue observing Venus until 01UT on 15 Oct just 3 hours ahead of the Bepi Colombo’s closest Venus encounter. In this time period, the spatial resolution at which MERTIS will image Venus will be increasing from ~1100 km/pixel (on 13 October) to ~60 km/pixel (on 15 October). In this period MERTIS, which is both a mid-infrared imaging spectrometer (7-14 µm) and a radiometer (7-40 µm), will detect atmospheric temperature (at 50-80 km), the aerosol density within the cloud layers, and SO2 gas abundance near the cloud top level atmosphere, at ~60-70 km.

At CA, PHEBUS, an ultraviolet spectrometer will be used to complete nightside stellar occultations in the time period from 03:58 UT to 04:28 UT. The observations will be completed using the FUV channel, which disperses light between 145 and 315 nm. The level of starlight absorbed by Venus’ atmosphere will vary as the movement of the spacecraft causes the HD5448 star to rise above the night side limb of the planet. This information will be used to retrieve the vertical abundance profile of trace gases and upper haze present above the cloud top level over the altitude range of 80-200 km (Fig. 3). Airglow emissions produced on Venus nightside by NO gas recombination will also be detected as PHEBUS looks across the limb of Venus to the star. The local times and underlying Venus topography that will be evident on Venus below the sub-spacecraft point during the MERTIS and PHEBUS observation periods is shown in Figure 4. 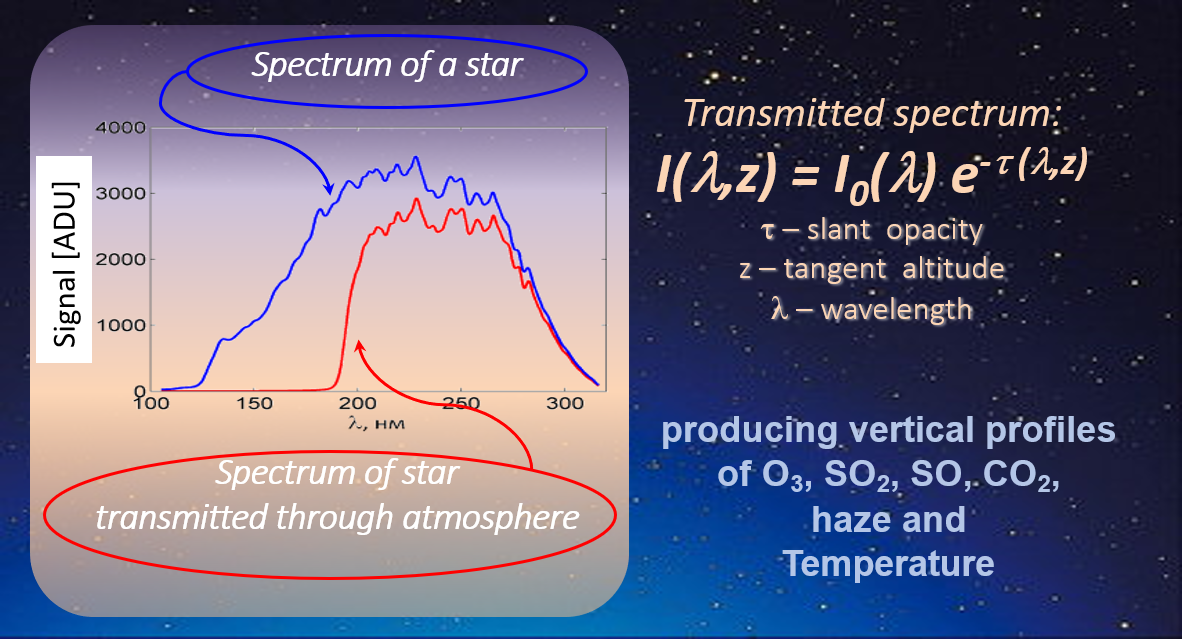 Figure 3 Transmission of starlight through the atmosphere 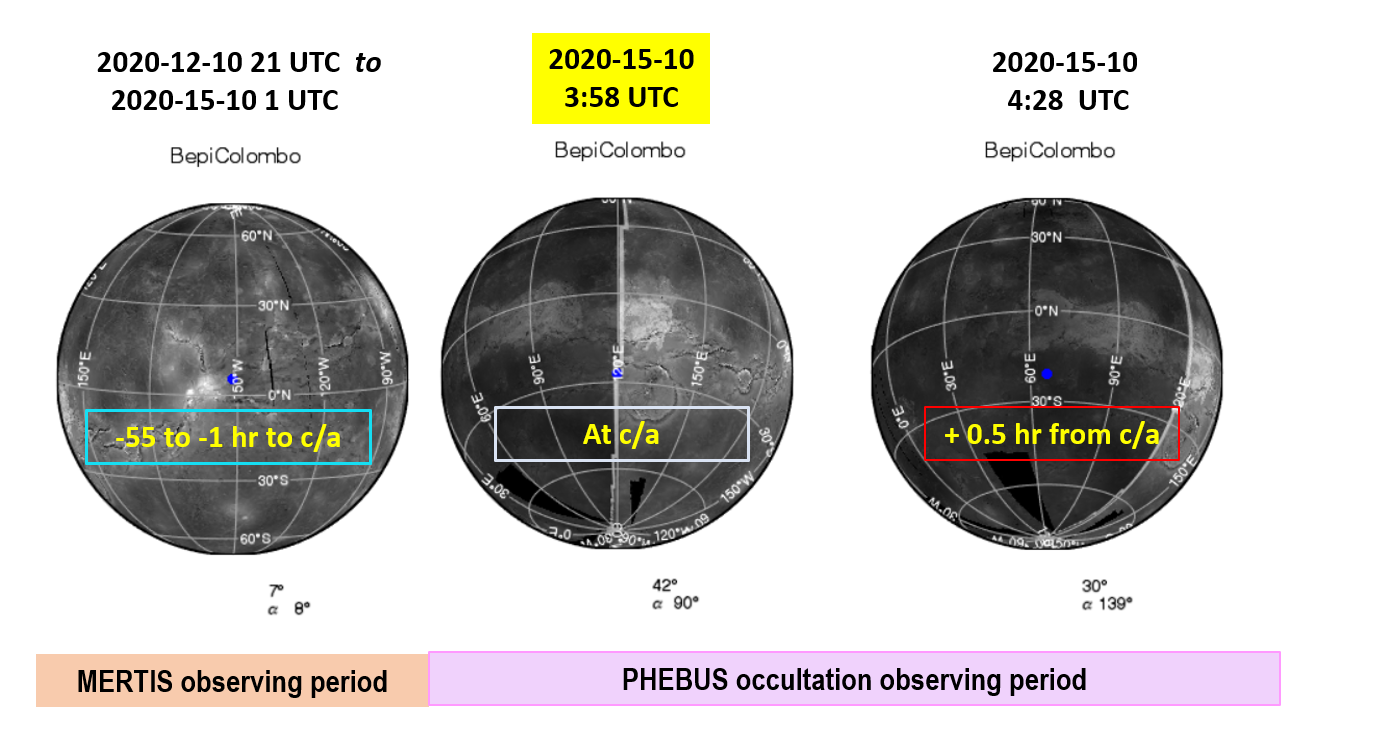 The BepiColombo mission provides an opportunity to obtain multi-vantage point measurements of Venus atmospheric properties that are needed to investigate Venus’ climate mechanisms and energy distributions. In particular, the 3 to 12-day period around BepiColombo’s 1st closest approach to Venus will be well coordinated with two other spacecraft: JAXA’s Venus orbiter Akatsuki and JAXA’s Earth-orbiting space-based EUV (52-150 nm) telescope Hisaki (Fig. 5); as well as other ground based observing facilities.

On 13-15 October, in concert with the MERTIS and PHEBUS observing periods, Akatsuki’s mid-IR (8-12 µm, LIR) and ultraviolet (283 and 365 nm, UVI) cameras will be in the intensive imaging mode (see Fig. 5). Before 13 October and after 15 October Akatsuki will continue regular Venus monitoring from its equatorial orbit. Akatsuki’s LIR camera will provide information on the cloud top thermal structure on Venus’ day and night sides, while the UVI camera will continue to monitor winds and UV brightness occurring in Venus’ upper cloud layer. Hisaki will observe Venus on 10-22 Oct providing data on Venus’ dayglow emissions produced by solar UV light breaking up CO2 molecules into CO and O components.

Over the same period, ground-based supportive observations will be conducted from i) IRTF/SpeX on 13-18 October that will record 1.27 µm airglows produced by the recombination of oxygen atoms originally created on the dayside by the UV light photolysis of CO2 emission, and Venus’ cloud top thermal signature at 5.1 µm. Lessons learned from ESA’s previous Venus Express indicate that nightglow observations (obtained by BepiColombo and from the ground) will provide insight into the structure and dynamics of Venus’ upper atmosphere as well as details on the gas species distributions. ii) STELLA UV imaging will be continuing from Aug until Nov to support Venus UV observations. The data will be crucial to monitor its temporal brightness variations together with the spacecraft observations. Amateur astronomer observations at UV and near IR wavelengths sensitive to the atmospheric movement at the altitude of the cloud layers continue to be strongly encouraged (see, Amateur astronomer support page).

Observing in coordination, these platforms will provide complementary viewing geometries of Venus from the three locations (BepiColombo, Akatsuki, and the Earth) are shown as video and figures (Figs. 6-8). So the almost entire globe of the planet, from early morning through noon to evening, can be captured during this campaign period. The gathered data are expected to reveal Venus’ thermal properties, multi-altitude chemical species distributions, cloud layer zonal wind speeds, meridional motions and thermal structure; as well as high altitude ~90-120 km zonal transport processes. The resulting data will then be used by Venus experts to parameterize photochemical and dynamics models designed to study and infer Venus’ vertical energy distribution and the drivers of Venus’ atmospheric circulation—which at present remain distinctly enigmatic. 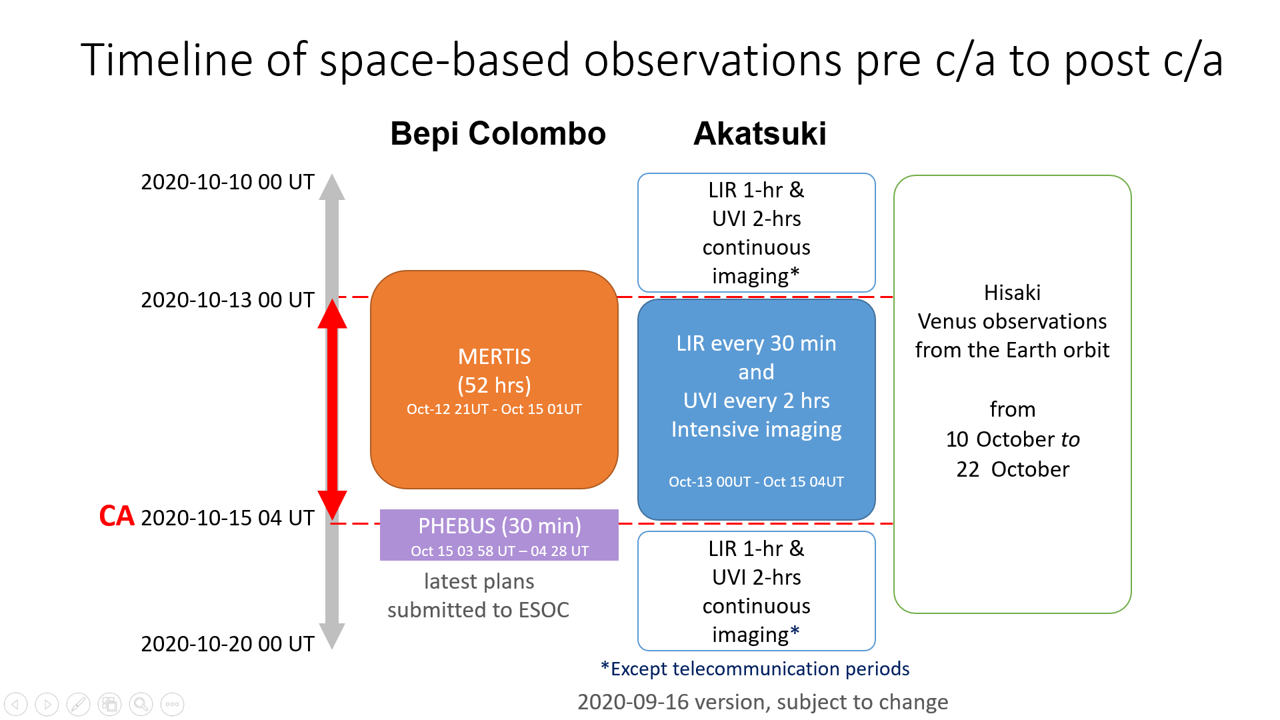 Animation of Venus day-night viewing geometry during the 1st flyby as seen from BepiColombo, Akatsuki, and the Earth

Figure 7. Expected Venus thermal tide as seen from BepiColombo, Akatsuki, and the Earth on 14 October 2020 22:30 UT, when the FOV of MERTIS is filled by the Venus disk. Background image is taken from Akatsuki/LIR data [Kouyama et al. 2019]. Grey shaded area is the night side, green dots are sub-observer’s locations, and yellow dots are sub-solar locations. Solar phase angle (α, degree), apparent Venus size (diameter, degree), and Venus distance (km) are shown in the bottom.

Figure 8. Venus surface topography at the same time as for Fig.7. The Background image is taken from the MAGELLAN data [link]. Grey shaded area is the night side, green dots are sub-observer’s locations, and yellow dots are sub-solar locations. Solar phase angle (α, degree), apparent Venus size (diameter, degree), and Venus distance (km) are shown in the bottom.

The PHEBUS team plans a far distance Venus observation program in 2021. Exact dates will be updated later on.

The MERTIS team plans a far distance Venus observation program, named "Venus, as an exoplanet", in 2021, 2023, and 2024. Exact dates will be updated later on.