SGS ROLE DURING THE EARTH FLYBY

On 10 April 2020, the BepiColombo spacecraft will swing-by the Earth and get a pull towards the inner Solar System, followed by a Venus swing-by on 15 October 2020. Although there is already a dedicated web space to follow the activities at the Earth swing-by, the purpose of this page is to show how the SGS is getting ready for the flyby and how it will support the Instrument Teams, both on uplink (SPOT) sides and the downlink (data-processing, QLA):

The SPOT tool was already supporting the Instrument Teams in the preparation for the Near Earth Commissioning Phase (NECP) operations together with the first instrument check-out operations, and has been used now for the generation of science operations for the Earth flyby. 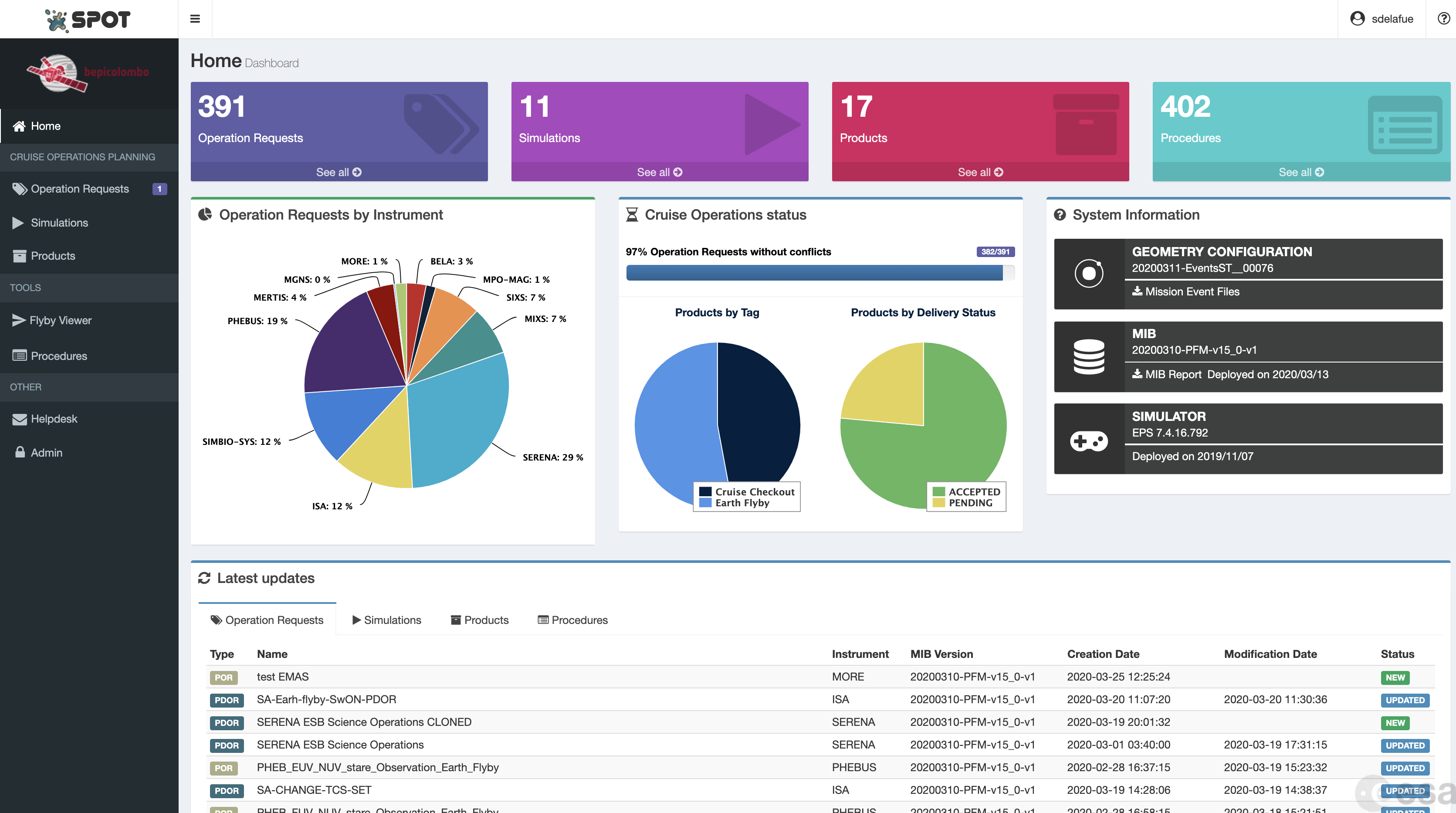 The tool allows to create, clone, edit and delete payload operations (direct) requests, all fully compatible with the MIB and the applicable interfaces.

The payload operations requests for the Earth flyby have to be referred to the Earth Closest Approach, but SPOT includes Science events for selection, like Earth magnetopause entry/exit and Earth bowshock entry/exit. The instrument teams can select these science events in the preparation of their intrument operations, that are converted at the time of submission to closest approach relative times by the tool. 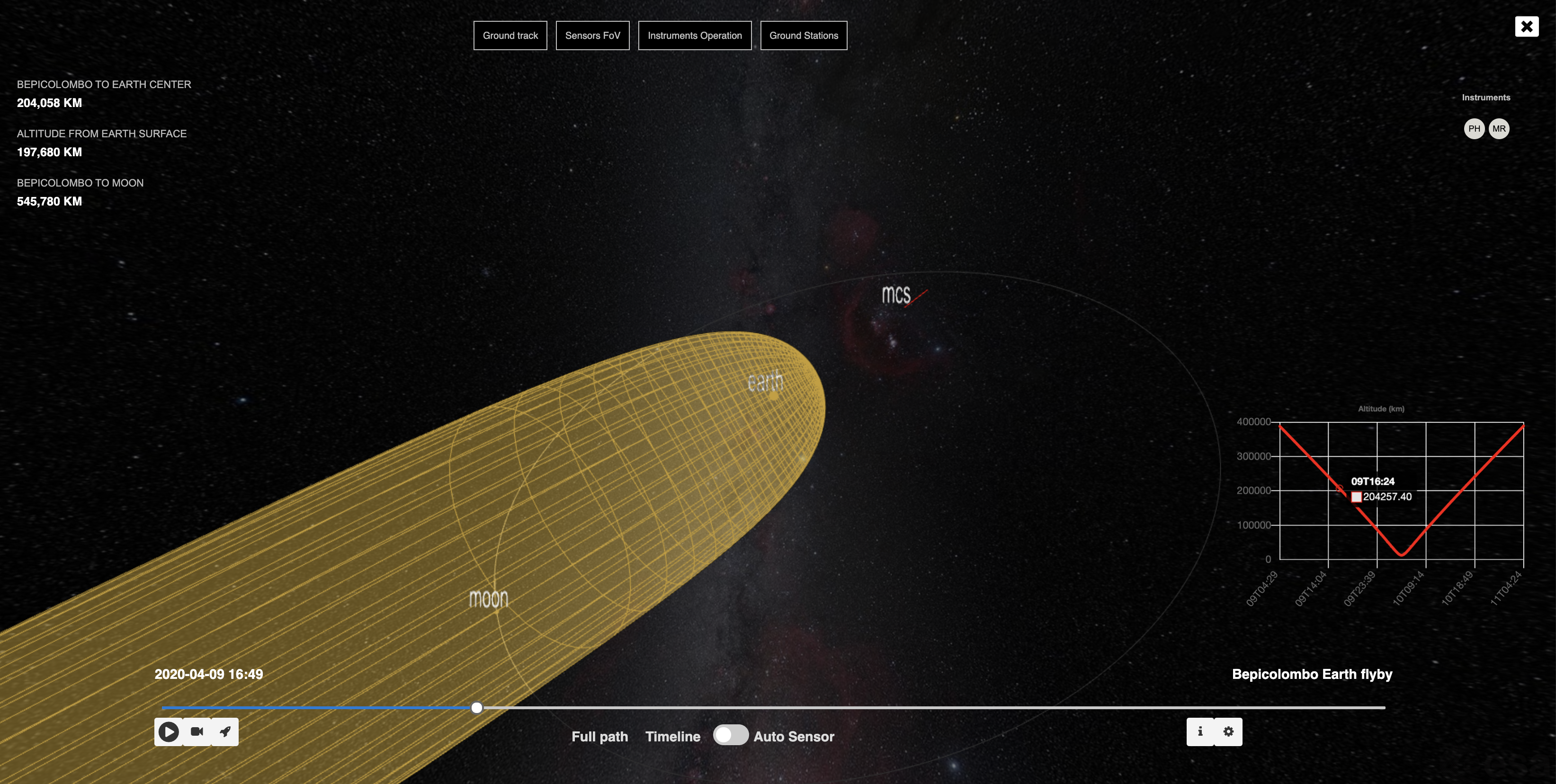 Once payload operations requests are ready, the instrument teams can deliver them to ESOC through SPOT tool, that ensures compatibility with the required naming convention and configuration control. Download of delivered products together with delivery acknowledgment responses are available in SPOT.

SPOT includes as well enhanced 3D visualisation capabilities, that allows the simulation in 3D of a set of operational products before or after submission to ESOC, incorporating, trajectory, spacecraft and sensors field of view visualisation, ground stations coverage and ground track information, spacecraft and instruments timeline and Earth Magnetopause and Bowshock 3D visualisation. 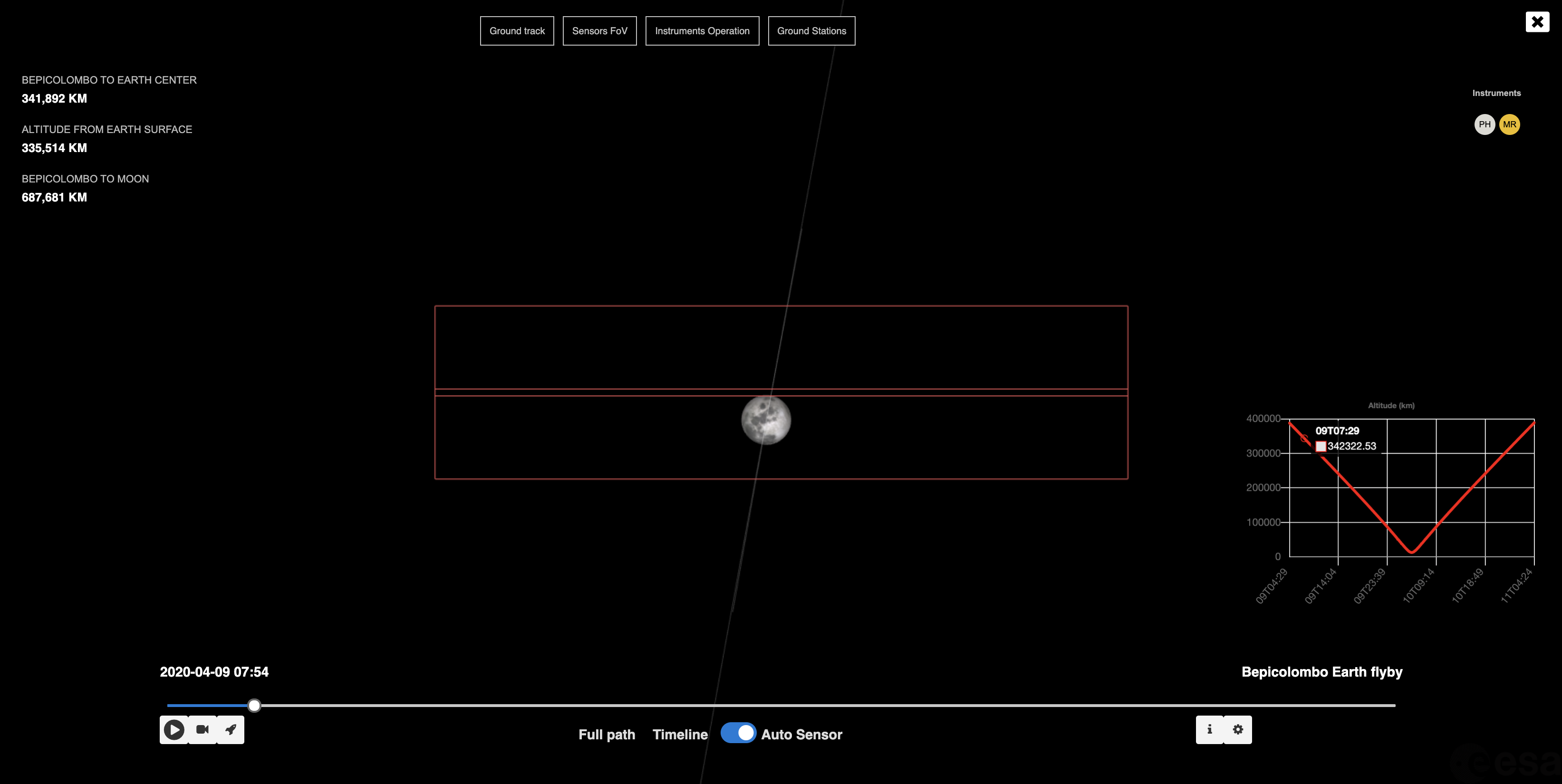 SPOT also provides payload operations simulation capabilities for checking the execution of sequences and telecommands before/after submission to ESOC.
All the information in SPOT is centralised and version-controlled. Additionally, privacy and confidentiality of the data is ensured through user authorisation and authentication.

Processing the telemetry received from the spacecraft on ground into science products for the archive and providing quick access and visibility of the science results to the science team are the responsibility of the SGS. Science raw and calibrated products are generated by the data processing pipelines within hours after reception of the telemetry and can be visualised through the Quick-Look Analysis web-application. Science products are also made available in the Planetary Science Archive (PSA) to the instrument teams for detailed analysis and further processing.

For this purpose, the SGS data processing and quick-look analysis infrastructure, in operation since Launch, has been enhanced significantly to support the monitoring, sharing and analysis of all the scientific measurements that will be acquired during the Earth-flyby. This infrastructure includes instrument-specific calibration and reduction processing pipelines developed by the PI teams. Reduction pipelines are hosted either by the SGS or by the corresponding PI team based on a prime-redundant configuration and with a replica always available at the SGS.

Despite the limited science capabilities of the spacecraft in cruise configuration (as the boresight of many instruments is blocked or partially blocked by the Mercury Transfer Module), several instruments will perform calibration and scientific measurements during the Earth-flyby.

Below an example showing MPO-MAG (magnetometer) data in the Quick-Look Analysis web-application. The magnetometer instrument will be making very rapid measurements of the well-characterised magnetic field in the vicinity of the Earth in order to check their instrument calibration. The magnetometer team will also be generating averaged data to share with other scientists and team-members of the BepiColombo mission to support their own science during the Earth flyby. 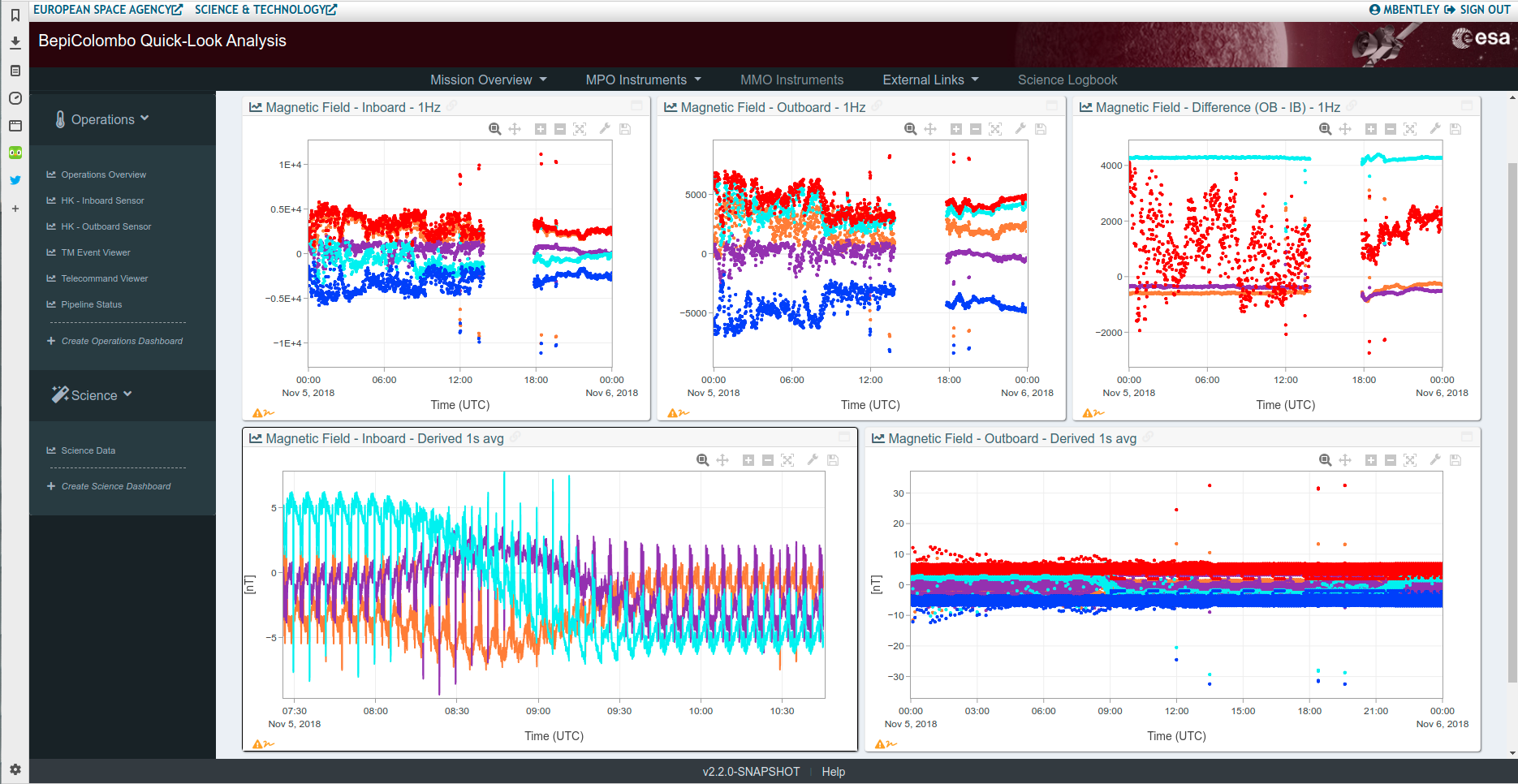 During the night from the 9th to the 10th of April 2020, while several BepiColombo instruments will be looking at the Earth and the Moon, although partially obstructed by MMO and MOSIF, the Solar X-ray Intensity Spectrometer (SIXS) will measure the energy spectrum and direction of protons and electrons when crossing the radiation belt. Part of these X-ray, protons and electrons measurements will be shared with the whole BepiColombo science team, providing support to the interpretation of their data.

The MPO radiation monitor (BERM) will provide particle counting measurements when crossing the radiation belt, which will be used as valuable support information to other particle instruments (SIXS-P, SERENA). This information is shared across teams in the Quick-Look Analysis interface. 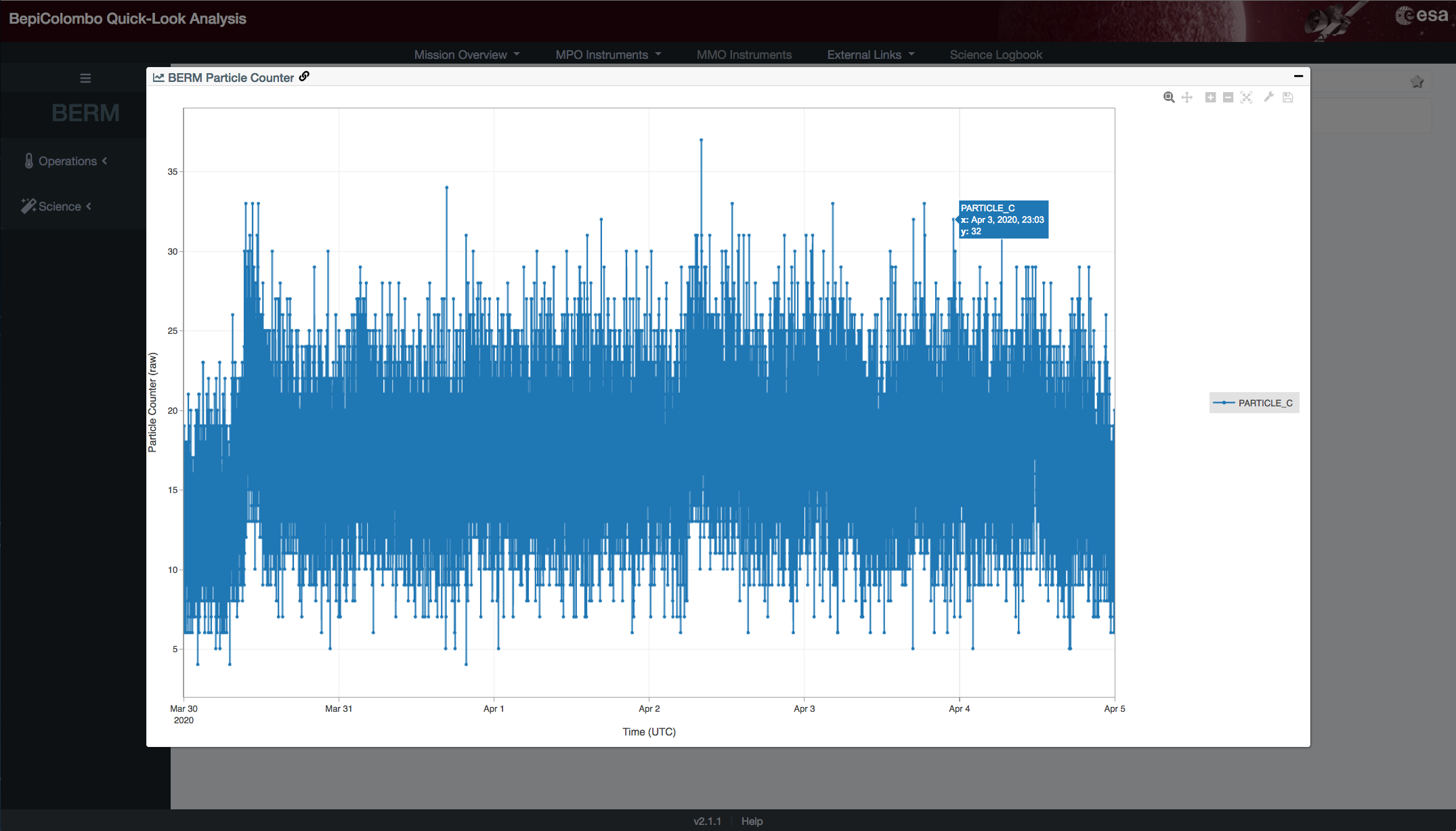 While most of the instrument's field-of-view are obstructed by the Mercury Transfer Module during the Cruise phase, the MErcury Radiometer and Thermal Infrared Spectrometer (MERTIS) will take advantage of its Space view to observe the Earth and the Moon in the thermal infrared domain with its radiometer (TIR, top image) and its spectrometer (TIS, bottom image). So far operated for testing the performances of the instrument and its calibration sources, and designing the operation sequence for the flybys, this will be the first scientific observation performed by MERTIS. The data will be made available to the instrument team through the Quick-Look Analysis web-application soon after the observation scheduled on the morning of the 9th April 2020.

A unique instrument on-board the BepiColombo MPO is ISA - the Italian Spring Accelerometer. This provides a very sensitive measure of forces acting on the spacecraft and supports the radio science experiment in ultimately making measurements of the orbit, rotation and ultimately internal structure of Mercury. The example here shows the acceleration measured in three axes on-board the MPO, as displayed in the Quick-Look Analysis interface. 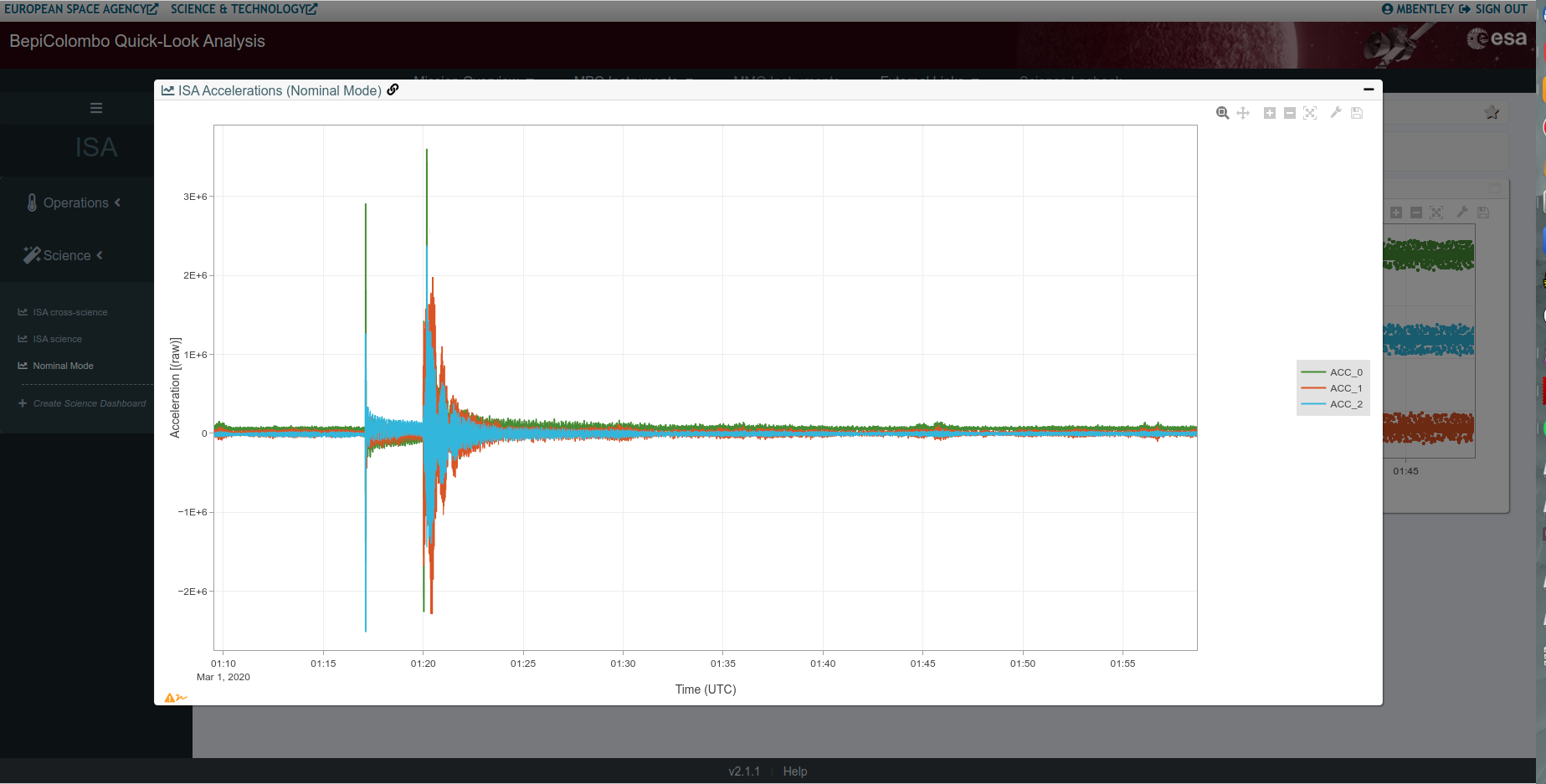 In addition to the Quick-Look Analysis web-application, all the spacecraft and payload housekeeping parameters are made available to the science team via a web-based user interface (WebMUST). This interface allows to monitor in near-real time the spacecraft's and instruments' operations, as the telemetry arrives on ground. Pre-configured dashboards (named profiles) can be designed for specific needs such as mornitoring the data volumes in the packet stores of the on-board mass memory (SSMM) along with the switch on of the various instruments of the BepiColombo payload. Similar operational views are also accessed in the QLA to ensure the full monitoring of instruments' operations at mission level. 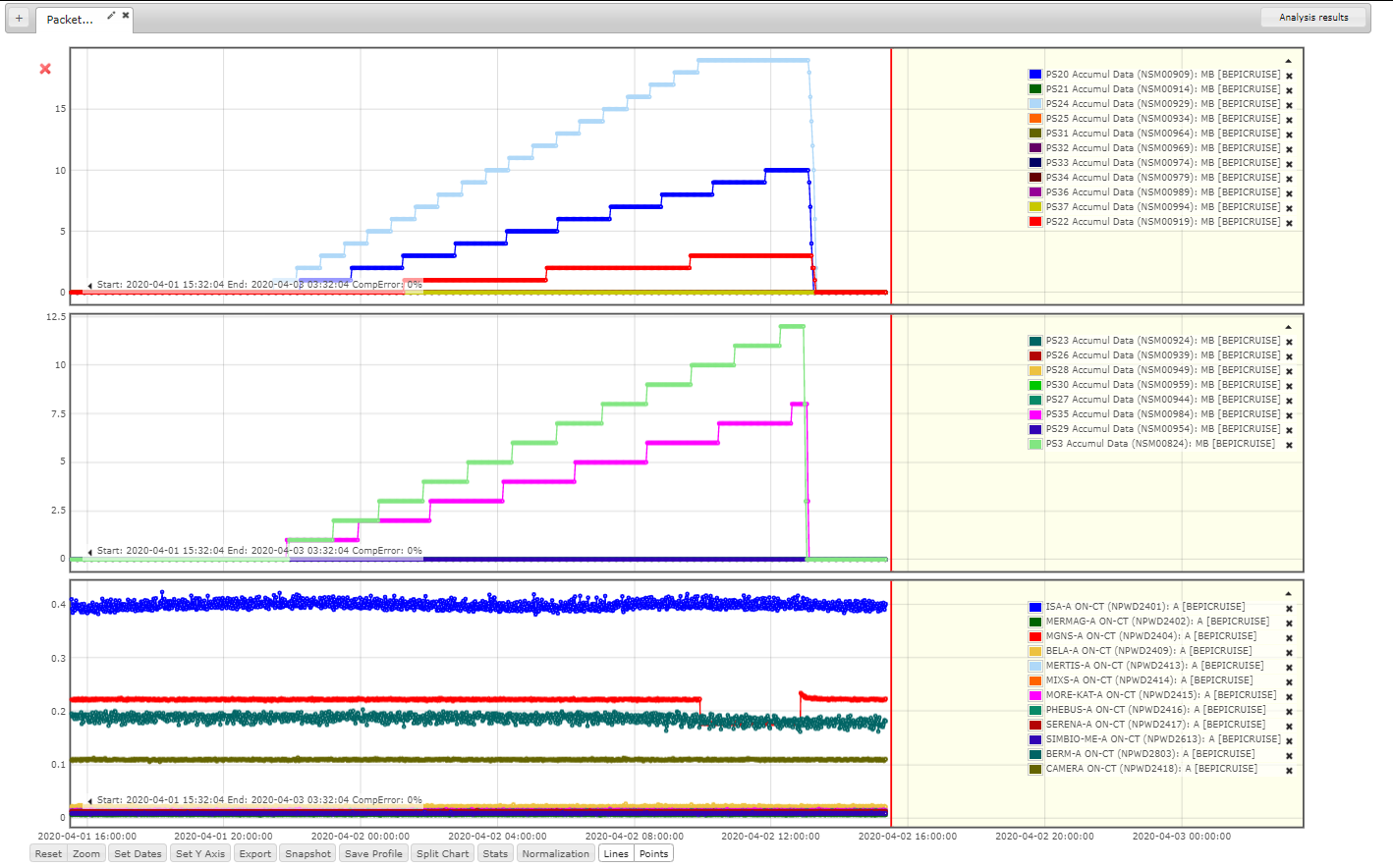 And not only the scientific instruments will be busy during these days, the monitoring cameras (MCAM) will be also active!. The Earth and the Moon, which could be observed by MCAM in early March, will get much bigger in the field of view of the cameras. And all the images will be made publicly available in the Planetary Science Archive after 10 days. 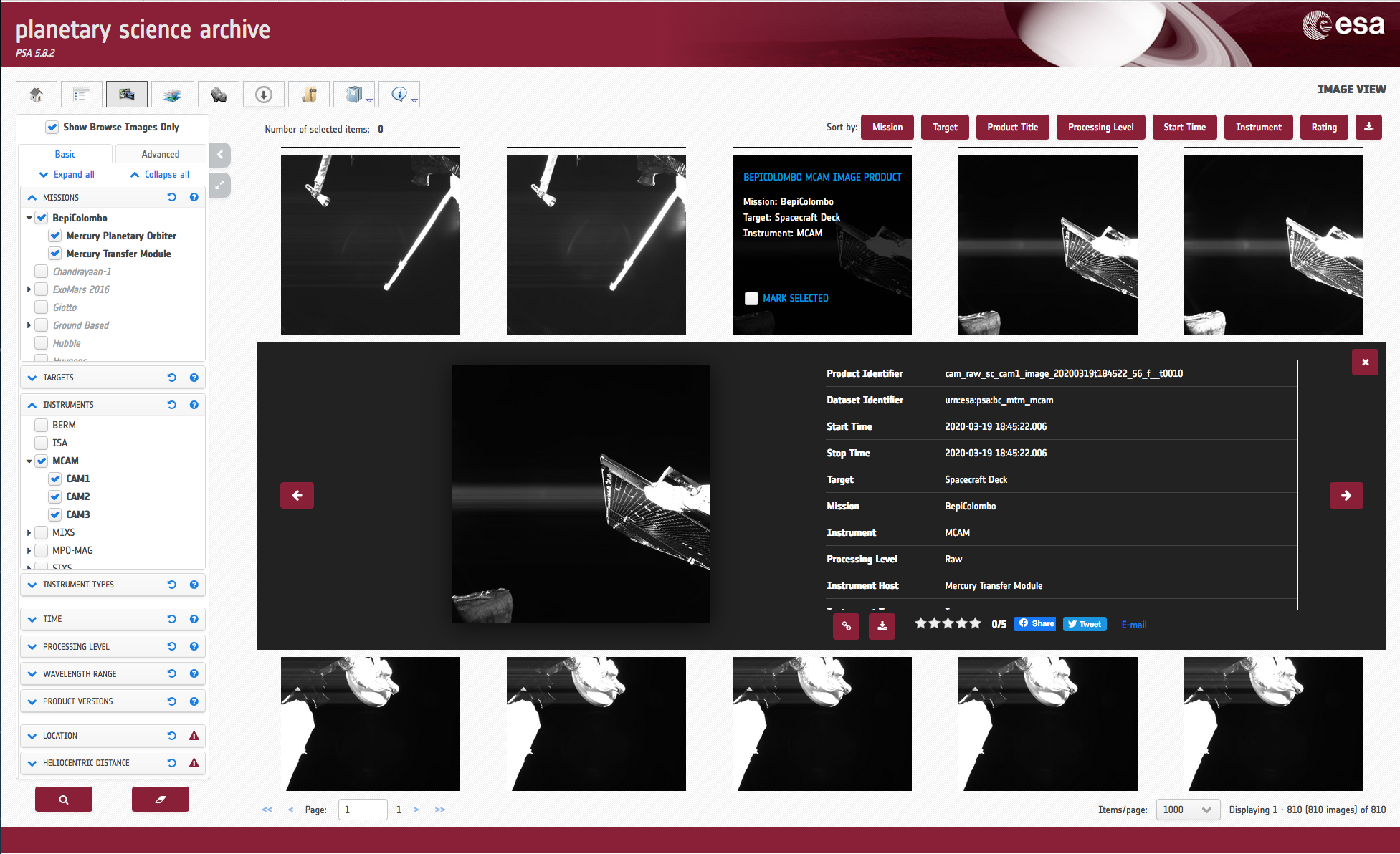 In the past few weeks, the SGS team and the PI teams have exercised all the steps involved in these operations by running dedicated rehearsals in preparation for the Earth-flyby. This was a very intense period due to the effort involved in running the simulations and especially due to the current situation with the COVID-19 since, as many other people around the world, the whole team is teleworking. 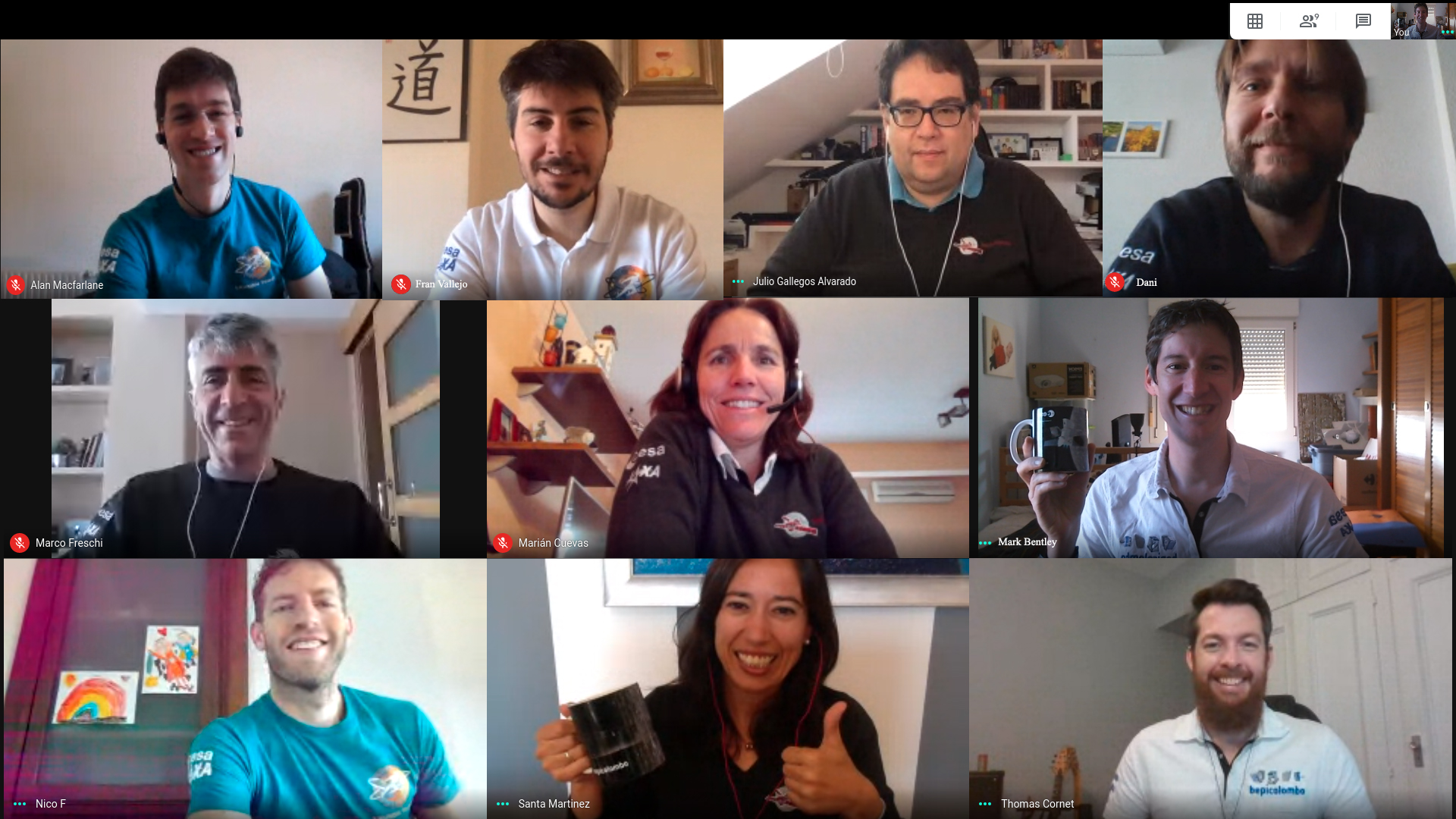 It takes collaboration, teamwork, motivation and commitment to get the best scientific results out of a science mission, and BepiColombo is in the right path.

Looking forward to start the reception of data in the next days! Stay tuned! Stay safe!.