This page contains data, especially, images from ground based astronomers, in space telescopes, and the BepiColombo Monitoring Cameras. The page will be continuously update as the data and images arrive. 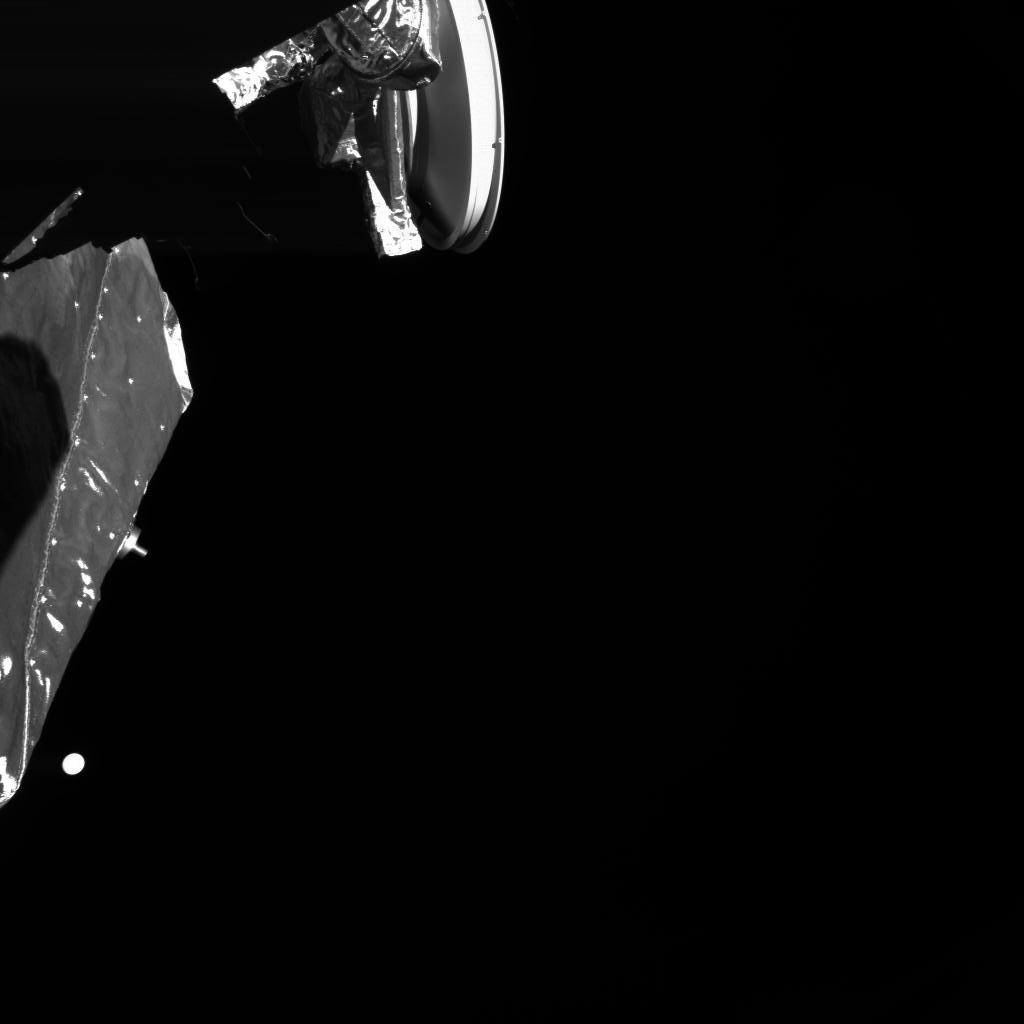 from the ESA site: AT CLOSEST APPROACH

"The joint European-Japanese BepiColombo mission captured its first glimpse of Venus on 14 October 2020 as the spacecraft approached the planet for a gravity assist manoeuvre a day later.

Venus appears towards the left, close to the spacecraft structure. The high-gain antenna of the Mercury Planetary Orbiter is also visible a the top of the view." 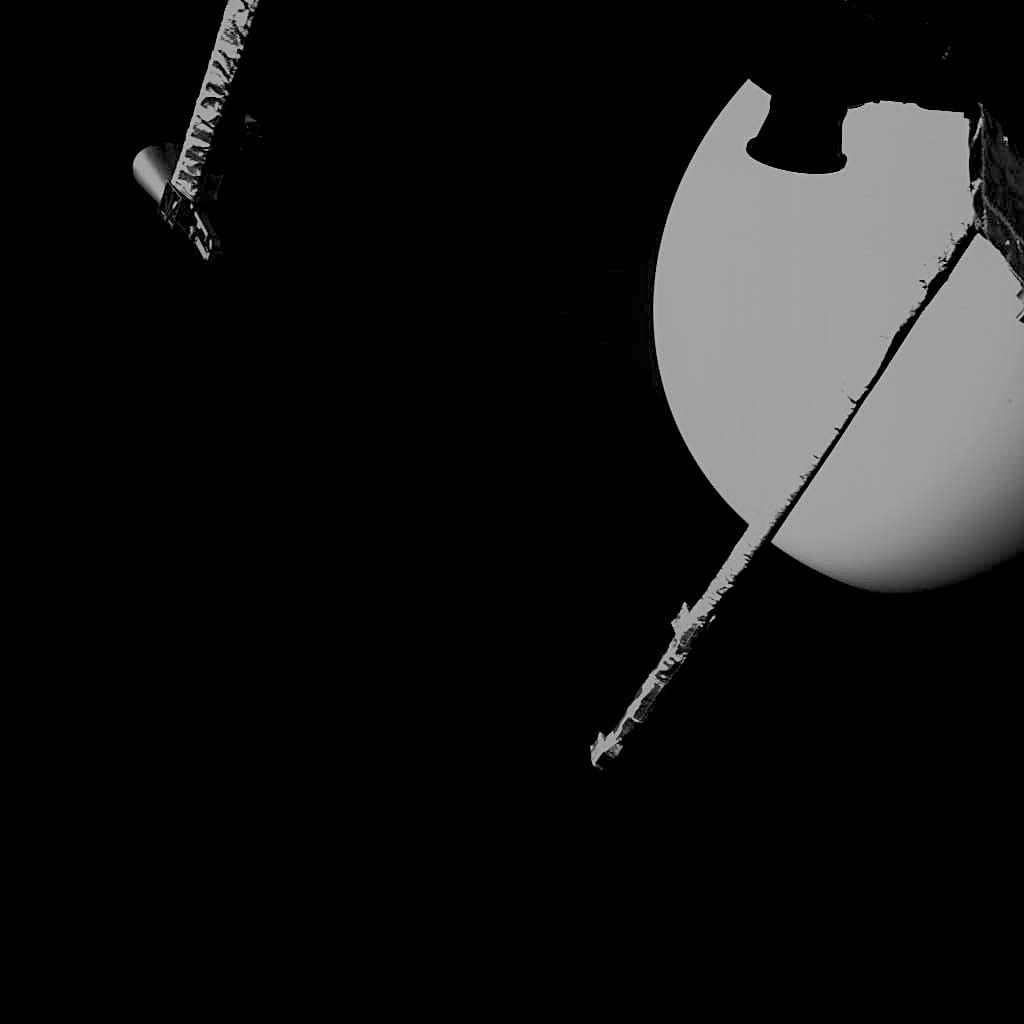 from the ESA site: AT CLOSEST APPROACH

"The image was taken at 03:37 UTC by the Mercury Transfer Module’s Monitoring Camera 2, shortly before closest approach at 03:58 UTC. The medium-gain antenna of the Mercury Planetary Orbiter is visible at the top of the image, along with the magnetometer boom, which extends from the top right of the frame. At the time of the image being taken, the spacecraft was within 17 000 km from Venus.

The cameras provide black-and-white snapshots in 1024 x 1024 pixel resolution. The image has been lightly processed to enhance the brightness and contrast." 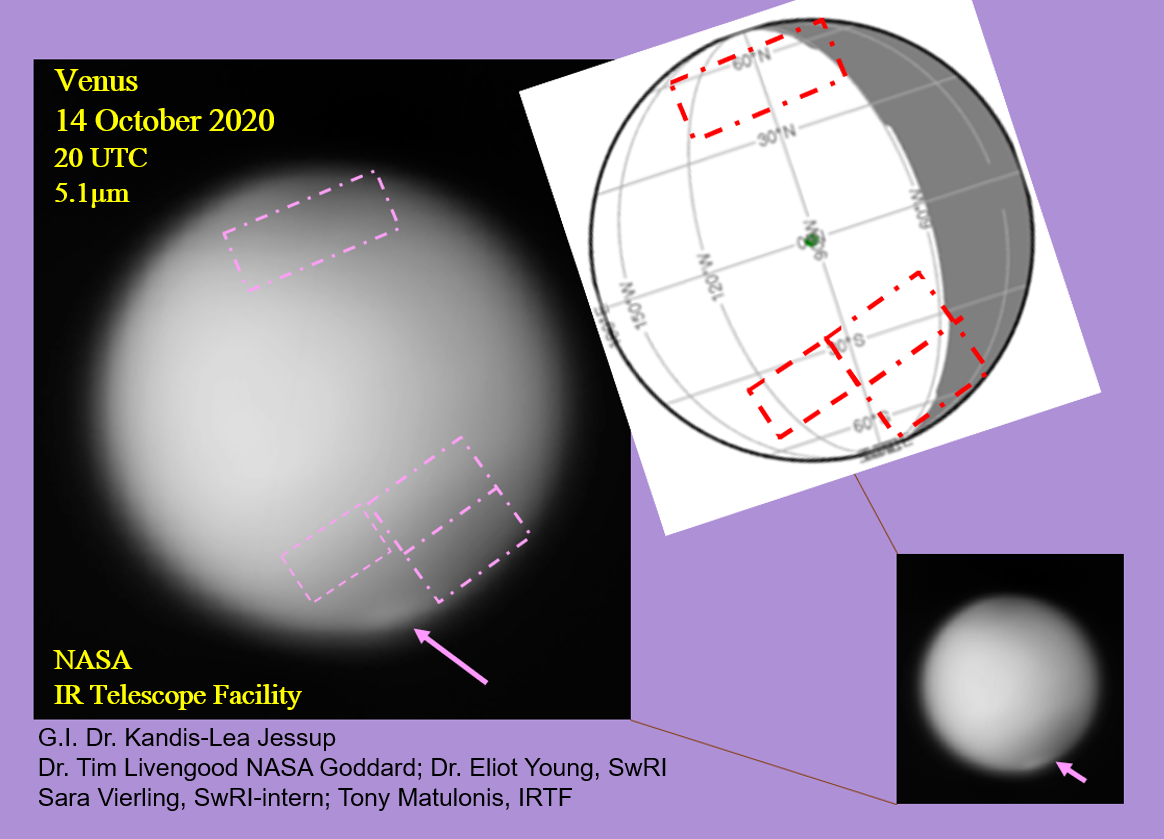 In the image presented on the top left, shows VEnus' thermal variations at the cloud top level. where the temperature decreases as pixel brightness darkens
In the image on the left the pink boxes highlight changes in temperature, the warmer the cloud top region the harder it is to see the outline of the box. Based on the box visibility, it is clear that regions near Venus' poles are cooler than the equator, and that at  these high latitudes the left side of the image is warmer (brighter) than the right side of the image. In the top right panel, these same boxes are inserted in red on top of a schematic of Venus' disk, where the latitude, and longitudes, and sky orientation of Venus are defined as it would be seen from the Earth. In this schematic the shaded region indicates nighttime hours on Venus. Comparison of the red box locations clarifies that the cooling at high latitudes occurs on both the day and nightsides. In addition to the high latitude cooling, there is also a region of localized heating that is located near Venus' south poles (as indicated by the pink arrow).
The IRTF images are complementary to the Bepi/MERTIS and Akasuki/LIR images that also observed Venus cloud top thermal variations; although Earth saw only a portion of the nightside ~ 4 hours before sunrise, the MERTIS oserved Venus'  full dayside and the Akarsuki/LIR images covered the portion of Venus' nightisde that extended from sunset to midnight. Thus, the combination of the Earth telescope images with the spacecraft images means that during the close encounter campaign Venus' full globe was observed contemporaneously on both the day and nightsides.
The IRTF observations were obtained by G.I. Jessup, working in collaboration with a team of scientists and students located at NASA/Goddard, SwRI (Boulder, CO) along with the NASA/IRTF staff telescope operators.

In the previous days many amateur images arrived in support of the BepiColombo Venus Flyby. Here below is a selection of observations from some dedicated observers: Joaquin Camarena (Spain), Luigi Morrone (Italy) and Emmanuel Kardasis (Greece). 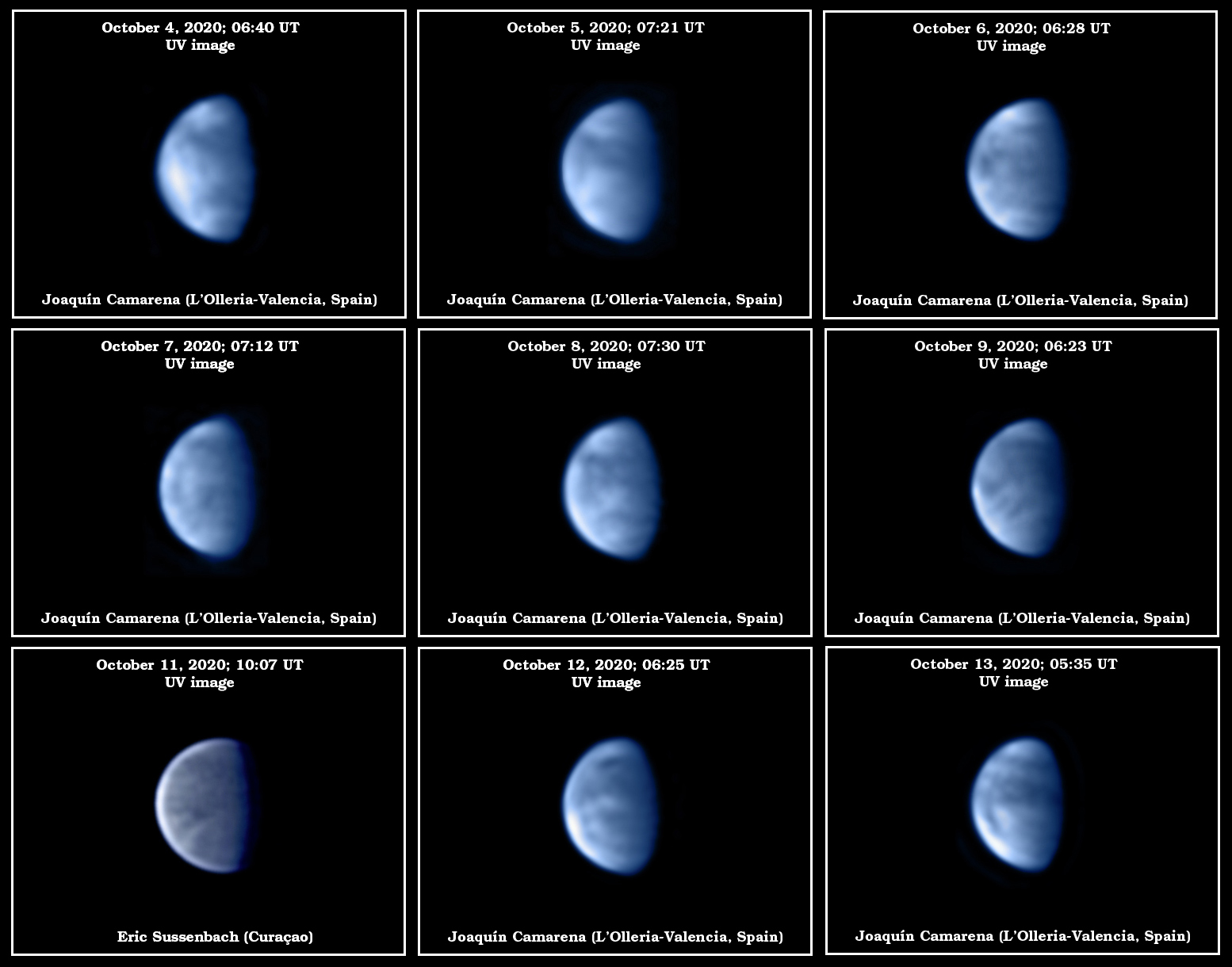 Ricardo Hueso and Itziar Garate-Lopez from UPV/EHU in Spain coordinated the Europlanet Venus ground-based support to the BepiColombo flyby. The amateur observations of this campaign are available at the Planetary Virtual Observatory and Laboratory (PVOL) website at http://pvol2.ehu.eus which is a general database of amateur observations of Solar System planets.

PVOL has been supported by the Europlanet 2024 Research Infrastructure and the campaign website is: http://pvol2.ehu.eus/bc/Venus/.

On November 4th a press release by JAXA showed a combined view of the trajectory and measurements by the Mercury Plasma Particle Experiment (MPPE) and the Plasma Wave Investigation (PWI) instruments onboard Mio. They imaged the particles and magnetospheric environment of Venus.

In the composite image above, the crossing of the different boundaries of the magnetospheric tail are shown, as measured by MPPE (MEA and MIA sensors). In fact both ions and electrons detected show a distinctive pattern that changes in correspondance to the bow shock crossing (shortly after 04:00 UT), the entrance in the ionotail (before 05:00 UT) and the plasma sheet crossing (at about 06:00 UT). 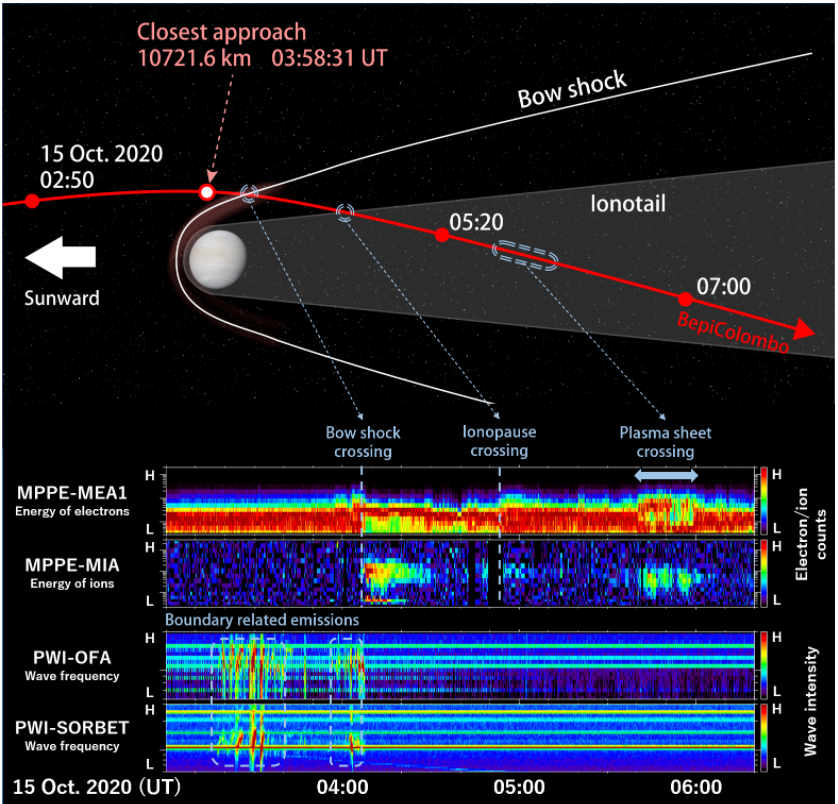 from the JAXA site: IN THE TAIL

"The scientific instruments installed on Mio also observed the solar wind and plasma environment around Venus. Figure 4 shows results from observations on October 15, 2020, between 03:00 and 06:20 UTC. The Mercury Plasma Particle Experiment (MPPE) revealed that the distribution of electrons around Venus differs from that in the solar wind and identified the existence of ions believed to originate from Venus (plasma sheet). We confirmed that the Plasma Wave Investigation (PWI) can measure signals even under the limited configuration adopted until the spacecraft’s arrival at Mercury.Since much remains unknown about the plasma environment surrounding Venus, the observations taken by Mio during the flyby provide valuable data."

In addition, through joint observation by BepiColombo with the JAXA spacecraft Akatsuki orbiting around Venus, and with Hisaki telescope orbiting around the Earth, simultaneous observations of the plasma environment surrounding the atmosphere of Venus have been realized. Further analysis through combining the observational data sets is expected to lead to new insights concerning Venus that were not previously obtainable.