Figure 1: The trajectory of the first Venus flyby in X-Y plane (VSO system) superposed to the simulation of the expected solar wind/proton density (left panel) and magnetic field strength |B| (right panel). Note that the Sun is now on the right and the red part of the trajectory shows what lies above the X-Y plane (credits: Chuanfei Dong, Princeton University, New Jersey).

Given that Venus possesses no intrinsic dipole magnetic field, the solar wind plasma can easily approach the planet and interact directly with the upper atmosphere, leading to the formation of an ionosphere and a whole induced magnetosphere that surrounds the planet.

Simulations in Figure 1are obtained for average solar wind conditions and by means of the BATR-US code publicly availablehere, and it describes the most probable configuration expected during the BepiColombo flyby. Left panel shows the proton density as it increases in the subsolar region above the planetary surface, and along a wide shell around the planet that elongates in the anti-solar direction forming a wake. It also shows BepiColombo trajectory during the first flyby (in red the portion lying above the X-Y plane): it crossed the extended region of the different interactions occurring between the solar wind and interplanetary magnetic field on one side, and the planet Venus on the other. BepiColombo came from the Sun direction where there was the outer unperturbed solar wind, then crossed the bow shock, the compressed proton density region in the magnetosheath, the ion composition boundary, the ionosphere and finally went in the magnetotail. Simulation is also completed by the expected morphology of the planetary induced magnetic field in the X-Y plane (Figure 1, right panel).

The occurrence of the BepiColombo flyby at Venus on October 15th 2020, together with the presence of a suite of instrumentation (onboard both MMO and MPO) fully devoted to the magnetospheric studies, allowed a detailed study of the extent, interactions, magnetic and density discontinuities, of the many interactions occurring between the solar wind and the environment of Venus.

In fact, as it can be noted from the timeline below (Figure 2), all instruments (apart from PHEBUS) that were switched on during the bow shock crossing and the ion composition boundary: 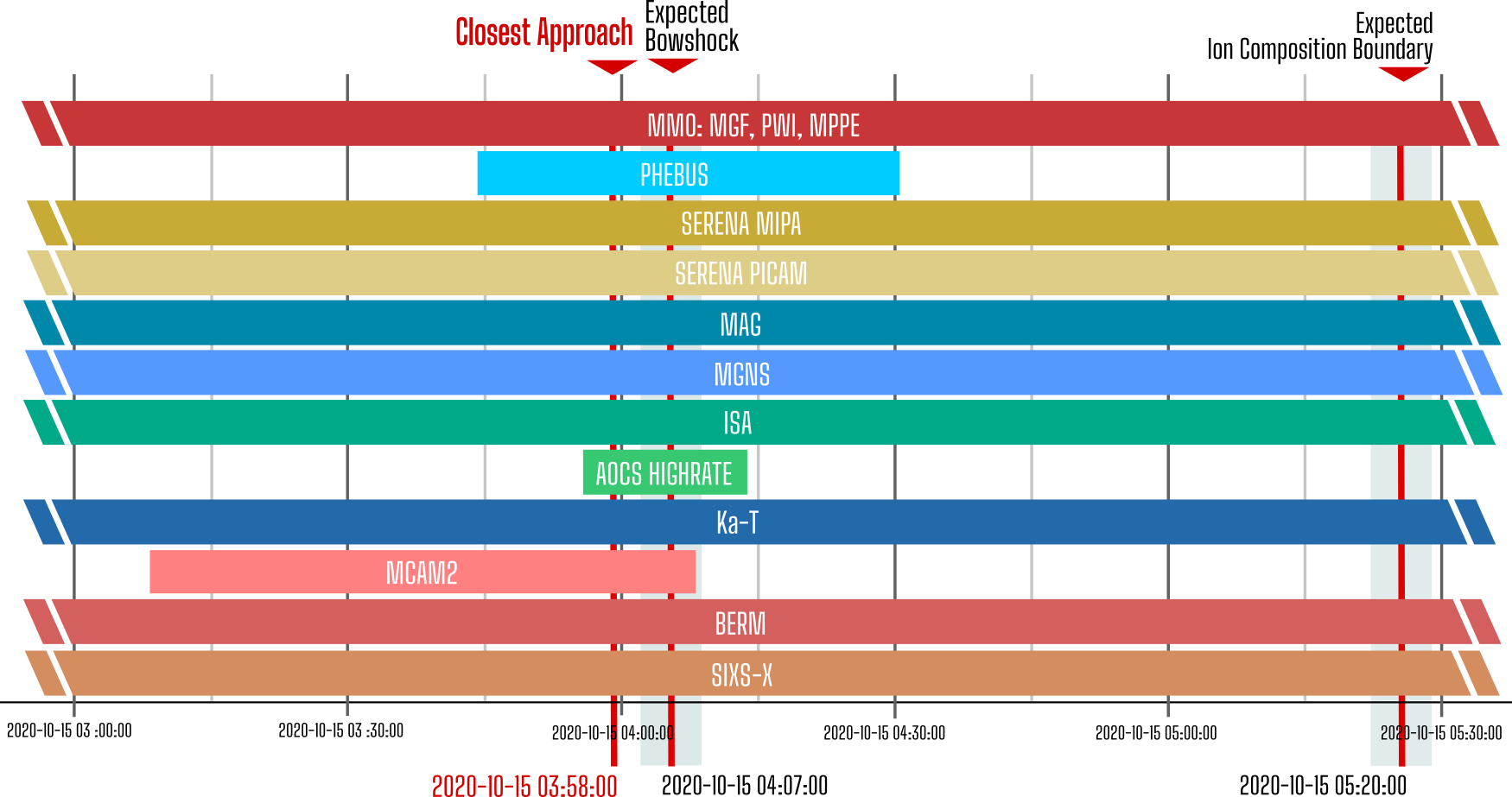 Figure 2: Timeline of the operating instruments during 1st Venus flyby between October 15th 03:00 UTC and 05:30 UTC. Note the time of closest approach, the expected bow shock crossing shortly after at 04:07 UTC and the ion boundary composition crossing expected to happen at about 05:20 UTC (Credits: Carmelo Magnafico, INAF-IAPS, Rome).

The BepiColombo instruments involved for the Magnetospheric investigations at Venus are:

The collection of all these measurements would then be of great interest to determine the position and extent of the bow shock (depending on the solar wind and interplanetary magnetic field condition at the moment of the flyby) and the other boundaries; to provide additional information on the electron and ion populations at different energies, and on the occurrence of some of the interactions mechanisms known to exist inside the induced magnetospheres.

Hence, the listed measurements, apart from being interesting investigation by itself, will also be important complement for:

Contrary to the 1st flyby, during the 2nd flyby of August 10 2021, BepiColombo will approach Venus from the tail side; then, it will encounter the planet at a minimum distance of about 550 km on the evening side (similar to the previous flyby), and finally it will pass by Venus exiting from the front side of the bow shock (see Figure 3: follow the blue line in the image below, from right to left). 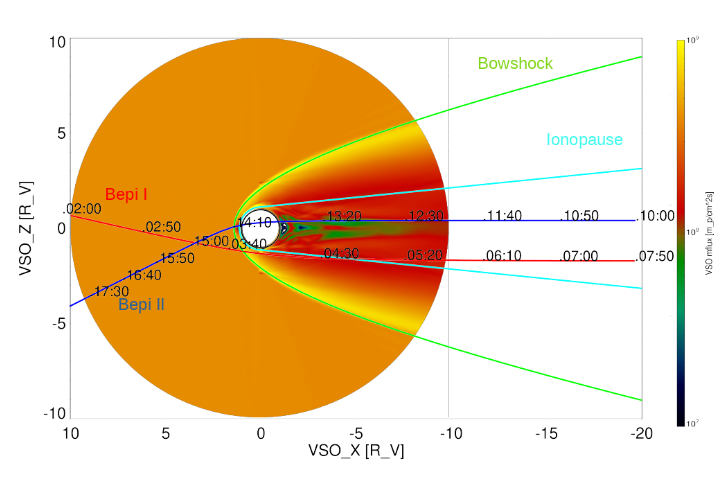 From the point of view of the magnetospheric investigations then, it will explore a long region of the magnetospheric tail that lies in between the bow shock and the ionopause, whose shape and extent strongly depends on the solar wind conditions at the time of the flyby. Hence, it will have the possibility to investigate a whole series of events that may occur in these boundary regions.

If we plot the timeline of the instruments to be operated during the flyby together with the previous cited regions to be crossed (Figure 4), we may see that the above described instruments (magnetometers, ion, electron and plasma sensors) will acquire data during the whole period of interest, starting from the far tail, the flanks of the bow shock/ionopause, and finally the external solar wind. In addition to the instruments used during the first flyby, there will be PHEBUS, SIXS-P sensor, and the MDM (the dust monitor) on board MMO. 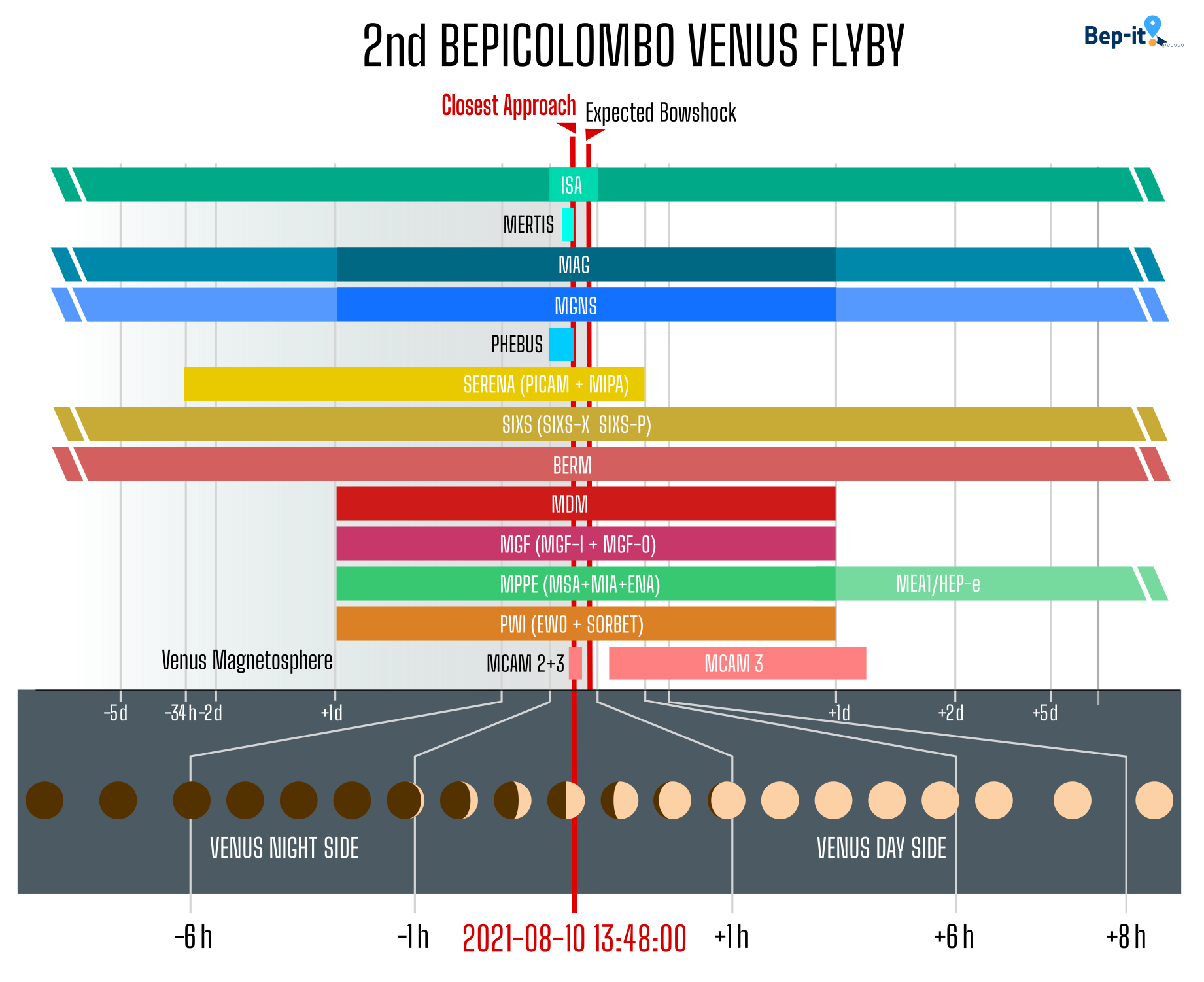 Figure 4: Timeline of the operating instruments in the days around the 2nd Venus flyby on August 10 2021 (Credits: Carmelo Magnafico/Valeria Mangano, INAF-IAPS, Rome).

Figure 5: The infographic by ESA created for the BepiColombo and Solar Orbiter ‘almost’ joint Venus flybys on 9 and 10 of August 2021. Instruments that will be operated on both spacecraft are listed too. Nb: distances of the probes are not in scale. Credits: ESA.

The second flyby of BepiColombo will be a special event not only for itself, but also because it will occur 1 day after the Solar Orbiter the Venus flyby on 9 of August 2021 (with closest approach at 04:42 UTC and minimum altitude of about 7995 km).

Hence, in addition to the expected coordination among the different instruments onboard BepiColombo, further coordination with the Solar Orbiter spacecraft is planned with the goal to take advantage of different interesting spacecraft configurations between the two probes:

This is a unique opportunity for Venus scientists to have information of different regions of its environment, and investigate the cause-effect relationship of the different phenomena/boundaries/populations that will be measured.

The Solar Orbiter instruments of particular interest for the coordination with BepiColombo are the following:

The X-ray imager STIX and the heliospheric imager SoloHI will complement the information for further interaction that may come from the Sun.

Coordinated analysis can be summarized into 4 different steps, as the two spacecraft proceed in their flybys:

Step 1: the two spacecraft approaching Venus from the nightside to monitor the boundaries and tail region processes: (SolO CA -3 days up to SolO Ca -12 hours). In this phase, it will be possible to investigate:

Step 2: MAG during VFB2 within the Venus environment (SolO CA ± 12 hours). In this phase it will be possible to:

Step 3: SolO crossing the magnetopause and bow shock and exiting in the solar wind (while Bepi is still in the Venus magnetosphere) (SolO CA ± 3 hours). During this phase it will be possible to investigate: