The Reference Laser Unit (RLU) employed on LISA Pathfinder is a 35mW Nd:YAG non-planar ring oscillator of the same design commonly used in metrology labs around the world. This laser design is ideal for space applications due to its small size, high electrical to optical efficiency and inherent low noise operation. The challenges for space applications come from the need for a robust design which can survive both the launch loads and thermal environment, as well as having a sufficient lifetime to guarantee the life of the mission. All of these challenges have been overcome and similar lasers are now flying in space on optical communication satellites. The RLU output is fibre coupled using single-mode, polarisation-maintaining fibre. The fibre couples the light to the subsequent component in the optical chain, the Laser Modulator (LM). The LM consists of a beam splitter, two acousto-optic modulators, and optical pathlength actuators. The light from the laser is split into two paths, each path is passed through an acousto-optic modulator (also known as a frequency shifter). One modulator is driven at 80MHz, while the other is driven at 80MHz+~1kHz, thereby creating two beams with a frequency difference of ~1kHz: the heterodyne frequency of the interferometers. The beams are then passed through the optical pathlength difference (OPD) actuators. The OPD is used to stabilise the fibre optic paths leading to the optical bench. After the OPD, the beams are transmitted, again via single mode/polarisation maintaining (sm/pm) to the Optical Bench Interferometer (OBI). 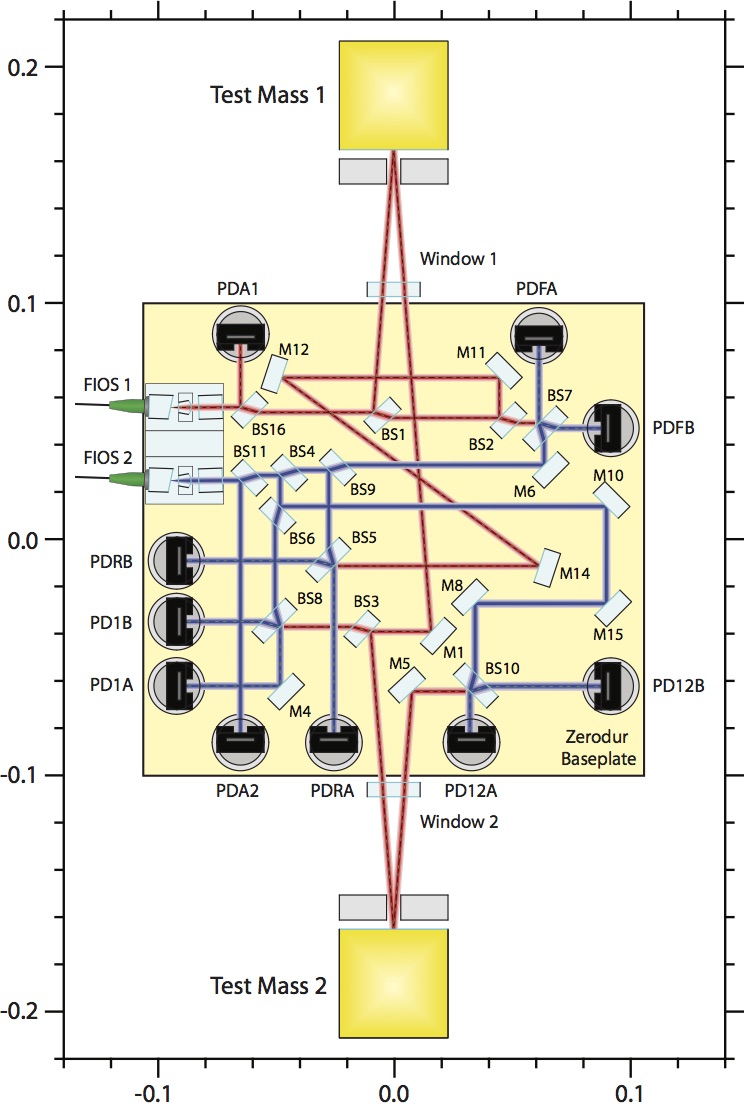 
As mentioned above, the phasemeter samples the data at 100Hz. However, the 100Hz samples are not required for routine operation, and so the data is downsampled to 10Hz prior to transmission to the on-board computer (and hence the DFACS). The downsampling is performed inside the Data Management Unit (DMU) - a 12MHz ERC32 processor. The DMU is also responsible for the interface to the LTP subsystems, routing telecommands and timing information to the units, and collecting and transmitting telemetry to the on-board computer. The DMU also controls the diagnostic subsystems, consisting of heaters/ thermometers, coils/magnetometers, and a radiation monitor. The diagnostic items are required to isolate particular noise sources in the LTP.