The spacecraft, also known as the science module,  carries all the necessary subsystems required to support the performance of the scientific experiments. In addition this module is also handling power and command and data handling as well as the operations of the propulsion module until separation. The science module moreover physically hosts the LISA Technology Package (LTP) and the NASA provided payload, the Disturbance Reduction System (DRS). The DRS replicates some of the functions of the Drag-Free and Attitude Control System (DFACS), including using the LTP as the inertial sensor, but uses its own set of miro-Newton thrusters, known as Colloidal Micro-Newton Thrusters (CMNT). 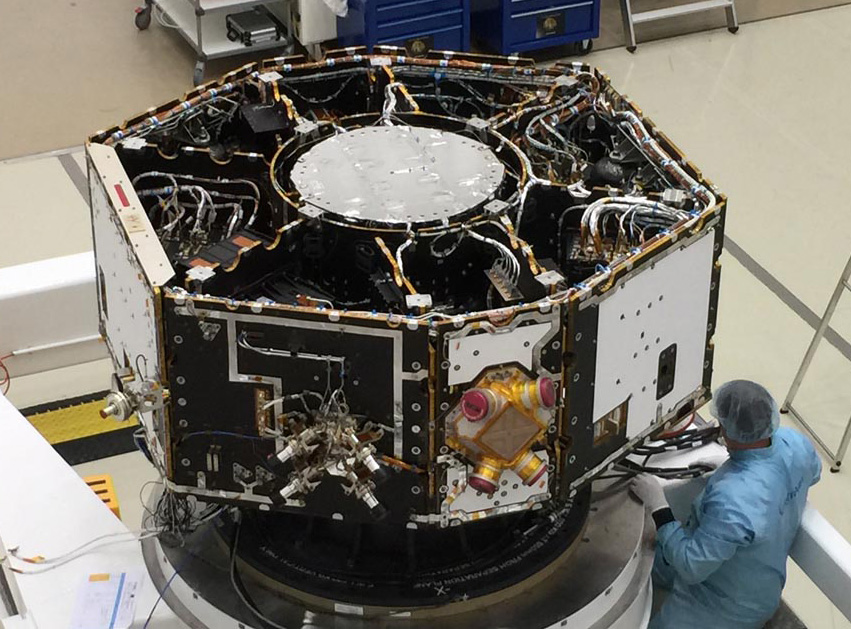 The science module structure provides the mechanical support for the hardware of the other spacecraft subsystems. The spacecraft has a shape of an octagonal prism. The outer diameter is 231cm and the height 96cm. One of the two bases is covered by a sunshield panel supporting an array of triple-junction GaAs solar cells of 2.8m2, providing at end-of-life 650W of power, while the other base interfaces with the propulsion module. A large central cylinder accommodates the LTP Core Assembly, while the rest of the payload equipment and the spacecraft units are mounted as far away as possible on shear walls connecting the central cylinder to the outer panel forming the octagonal structure. The cylinder and all structural panels are constructed from sandwich panels or shells with carbon fibre laminate skins bonded to aluminium honeycomb core. Aluminium items are limited to structural rings, cleats, inserts and minor brackets.

The Science Module is a three-axis controlled spacecraft. Apart from the DFACS, an Attitude and Orbit Control System (AOCS) is needed in order to control the Launch Composite (when the propulsion module is attached to the science module) and for the on-station phases when the drag-free conditions cannot be maintained. The AOCS uses as sensors two Autonomous Star Trackers, two Digital Sun Sensors (DSS) for sun acquisition and in safe mode and two Fibre-Optic Gyroscopes Units, required for certain phases where the optical sensors are inoperable due to high rates or eclipse. They are also needed to provide high bandwidth data during the main engine burn. The AOCS actuators are 4 pairs of 10N bi-propellant thrusters located on the propulsion module and six clusters (3 prime and 3 redundant) of cold gas thrusters each located on the sides of the science module.

The power subsystem provides a stable regulated bus, with voltage regulation at 28VDC. During the technology demonstration phase the spacecraft will be sun pointing, therefore all electrical power can be generated by the solar array. Battery power is only required during launch and early operations (LEOP), for eclipse periods during the transfer, during slews to and from engine firing attitude, while firing the engine, and for any anomalies during the on-station phase. For a nominal mission the battery is only required during the initial phases of the mission, therefore because of its low mass, and simple management, a Li-ion battery providing 400Wh is used.

The On-Board Computer (OBC) is the central control unit for all on board data handling activities, the attitude and orbit control subsystem (AOCS), the DFACS and the management of the platform and payload equipments. Data Handling functions mainly comprise command distribution, telemetry acquisition and timing facilities during all phases of the mission. Furthermore the OBC performs monitoring functions and depending the detection of failures provides safe system reconfiguration capabilities. The OBC consists of several independent redundant modules: two processor modules, each based on a single chip ERC32 central processing unit working at 22.5MHz with 6MB RAM, 1.5MB EEPROM and 64KB PROM; two telecommand, telemetry and reconfiguration units containing 400KB safeguard memory; four actuator and sensors interface modules and two mass memory units of 12.5Gb.

The OBC interfaces with the spacecraft units and the LTP through a MIL-bus 1553B, while the internal backplane link uses the Space-Wire standard. The OBC hosts the On-Board Software (OBSW) which performs all the spacecraft and most of the LTP functions. Only the interferometric optical measurement and the diagnostic functions are performed inside the LTP Data Management Unit (DMU).

The communications subsystem works at X-band frequency (7230MHz uplink and 8495MHz downlink) and provides for commanding and housekeeping telemetry during LEOP, transfer and on-station and also transmits science data telemetry whilst on-station.

For LEOP, some phases of transfer and during on-station anomalies, omni directional coverage is required. Two hemispherical antennas are used for the omnidirectional coverage allowing a maximum data rate of 60ksymbols/s during LEOP and 1ksymbols/s at L1. However to achieve the required telemetry data rate on-station at L1 distance, a medium gain horn antenna is used capable to transmit 120ksymbols/s. Two X-band transponders are present for redundancy, with coherent ranging. Additional amplification is required at the output of the transponders to achieve the required telemetry margins.