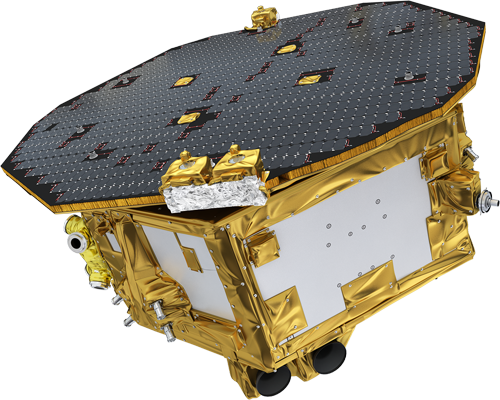 LISA Pathfinder essentially mimics one arm of the eLISA constellation by shrinking the 1 million kilometre armlength down to a few tens of centimetres, giving up the sensitivity to gravitational waves, but keeping the measurement technology.

The scientific objective of the LISA Pathfinder mission consists then of the first in-flight test of low frequency gravitational wave detection metrology.

LISA Pathfinder is due to be launched in November 2015 on-board a dedicated small launch vehicle. The launcher selected is the new European VEGA launcher, which will launch LPF from the European spaceport of Kourou (French Guiana) into a parking orbit with perigee at 200 km, apogee at 1540 km, and an inclination to the equator of ~10o. After a series of apogee raising manoeuvres using an expendable propulsion module, LISA Pathfinder will enter a transfer orbit towards the first Sun-Earth Lagrange point (L1). After separation from the propulsion module, the LPF spacecraft will be stabilised using the micro-Newton thrusters, entering a 500,000 km by 800,000 km Lissajous orbit around L1.

Following the initial on-orbit check-out and instrument calibration, the in-flight demonstration of the eLISA technology will then take place.