To get a better understanding of the atmospheric volume that is monitored by a (meteor) camera, one may use 3D GIS-software such as Google Earth to interactively explore the field of view of a camera. To do this, we created a PHP-script called "FOV3D". The script generates a 3D semi-transparant polygon representing the field of view of a given camera.

The script produces output in the KML-format, which is an XML-based language for describing geospatial data. KML-files can be imported into GIS-software such as Google Earth, NASA World Wind and ArcGIS. However, the files generated by this script have only been verified to work with Google Earth. 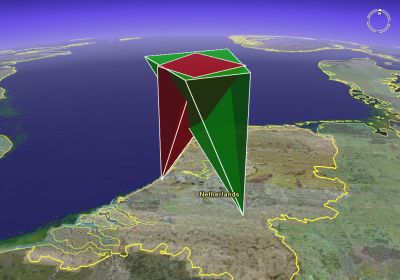 Example of a FOV3D-generated file in Google Earth, showing the MRG double-station setup in the Netherlands.

Use the form below to create a Google Earth-file for your camera setup.