We have recently purchased two Mintron cameas, using a ½” Sony Xview CCD. The camera also has the capability to integrate up to 128 fields and therefore reaches amazing limiting magnitudes for star imaging. The images of the Andromeda nebula that I obtained in a few seconds were better than the many days of effort I went through 20 years ago to photograph M31 with my telelens mounted piggy-back to a hand-guided 4.5” Newtonian… 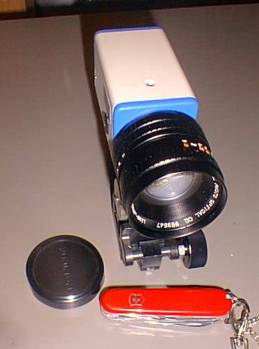 Below you can see some sample images.

We will be using these cameras as a finder for a 1.5-m-telescope to try to obtain spectra from a persistent meteor train during the Leonids 2002.

Currently I am still trying to understand the different options the camera has. There is an automatic gain control and an automatic shutter control.  Both can be switched off. Even though I think I switched both off, the image brightness still sometimes changes just as if it still automatically adjusts something. It may be that this is dark current building up during the exposures due to the warming up of electronics close to the detector. Then it should be constant after a while of the camera being switched on. The effect I observe, however, is that this occurs after each change in the settings of the camera or after camera movement. This surely needs more investigation.

Figure 1 shows a test for the limiting magnitude in the area of the handle of the Big Dipper. Stars as faint as 8.5 mag are visible with an On the bottom, the tip of the roof of my neighbors garage is visible. Uncorrected raw image. Figure 2 shows the constellation Lyra, north is to the right (it also shows part of my workshop). I used a 16 mm f/2.8 Russian fisheye lens which yields a field of view of about 12° x 15°. The integration time was set to the maximum value of 128. The limiting magnitude is about 7.2. The sky is darker than in the previous image, as this is higher above the horizon (I live in a brightly lit Dutch town close to the sea  - while it can be nice and clear close to the zenith, close to the horizon it is always bad…). 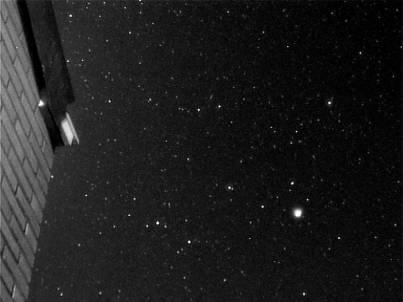 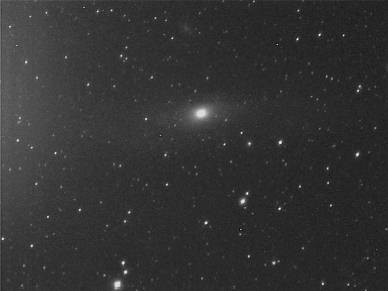 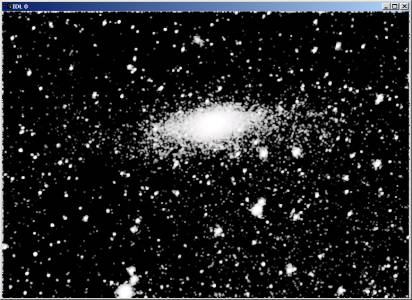 Figure 4: Same image as the above, dark current subtracted and histogram equalized.

Figure 3 shows a test with a 135 mm f/2.8 telelens, a standard camera lens which I mounted to the Mintron using a commercial M42-C-Mount adapter. M31 is prominent, both companion galaxies are visible (click on the image to download the 423 kByte uncompressed original). To the left the image is brighter due to the dark current, which becomes prominent after a while. The image to the right is a first attempt of some image processing, admittedly there still is some work to be done. I subtracted the dark current and performed a histogram equalization, which emphasizes the contrast of the image. Comparing the stars to the Guide planetarium software, I could identify stars down to about mag 12.5. However, in this contrasty view, the noise in the image also becomes apparent.

A dark current frame is shown in Figure 5. It was obtained simply by covering the objective lens. A number of hot pixels (i.e. white pixels) can be seen, as well an increase in dark current at the left side of the frame. This is an expected effect and can be explained with the output nodes of the detector, which are assumed to be on the left side. The quality of the images above can be improved dramatically after subtraction of the dark image. This, however, can only be done if gain, shutter speed, and exposure time are identical. As mentioned in the introduction, this seems not yet to be the case. 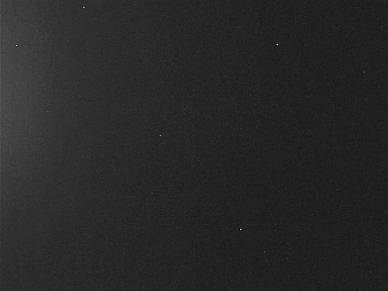 As can be seen, the Mintron camera is very promising in its application for video astronomy. For meteors it is less useful, as the integrating effect of course only works for objects that don’t move very quickly. However, we still plan to use it in our upcoming Leonid campaign. We will use it as a finder camera to point a 1.5-m-telescope with an optical spectrograph to the (hopefully appearing) persistent trail of a meteor.