ATHENA - in a nutshell - Athena

The selection process for the second Large mission ( L2 ) began in March 2013, when ESA issued a call to the European science community to suggest the scientific themes to be pursued by the Cosmic Vision programme's second and third Large missions.

In November 2013, the theme of "the Hot and energetic Universe" was selected for L2, with "the gravitational Universe" (now LISA) selected for L3. Athena is due to launch in the early 2030s, with possible optimisation during the implementation phase under study. After 8 years of Phase A and Phase B1, the meeting of the ESA Science Program Commitee in June 2022 deliberated that Athena will not be adopted, because the estimated Cost-at-Completion to ESA exceeds the budget allocated for an L-class mission. The observatory addressing the "Hot and Energetic Universe" science case is therefore undergoing a design-to-cost exercise, aiming at defining a mission profile consistent with a strict cost cap while preserving the flagship nature of the mission.

By combining a large X-ray telescope with state-of-the-art scientific instruments, Athena will address key questions in astrophysics, including: how and why does ordinary matter assemble into the galaxies and galactic clusters that we see today? How do black holes grow and influence their surroundings?

The black holes which lurk at the centre of almost all galaxies play a fundamental role in their formation and evolution.To investigate this connection, Athena will observe X-ray emission from very hot material just before it is swallowed by a black hole, measuring distortions due to gravitational light-bending and time-delay effects in this extreme environment. Athena will also be able to determine the spin of the black hole itself. 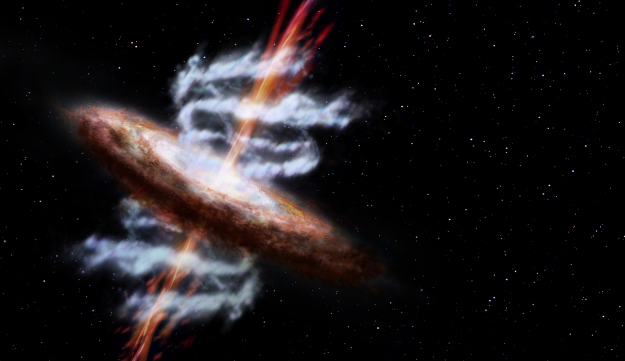 Athena's powerful instruments will also allow unprecedented studies of a wide range of astronomical phenomena. These include distant gamma-ray bursts, the hot gas found in the space around clusters of galaxies, the magnetic interplay between exoplanets and their parent stars, Jupiter's auroras and comets in our own Solar System.

The Athena mission concept was proposed by the community consortium, and will be studied in detail by ESA.

— the X-ray Integral Field Unit (X-IFU) a cryogenic imaging spectrometer covering the 0.3 to 10 keV energy range with unprecedented energy resolution, over a field of view a few arcminutes across

— the Wide Field Imager (WFI) covering the 0.1 to 12 keV energy range, based on a silicon active pixel sensor. It features a large field of view, excellent spatial and energy resolution and count rate capabilities up to the Crab regime (2-10 keV flux ~10-8 erg cm-2 s-1).

During each sky observation one of the two instruments will be placed in the focal plane of the X-ray telescope (focal length ~12m limited by the launcher fairing).

This combination of large area, high angular resolution and large field of view are made possible using the Silicon Pore Optics (SPO) technology developed by ESA and Cosine Measurement Systems over the last decade.

Athena is currently baselined to be launched into a halo orbit at the Sun-Earth L1 (1st Lagrangian) point, which provides for high observing efficiency, uninterrupted observations, and a benign thermal environment.