The Universe as seen by Planck 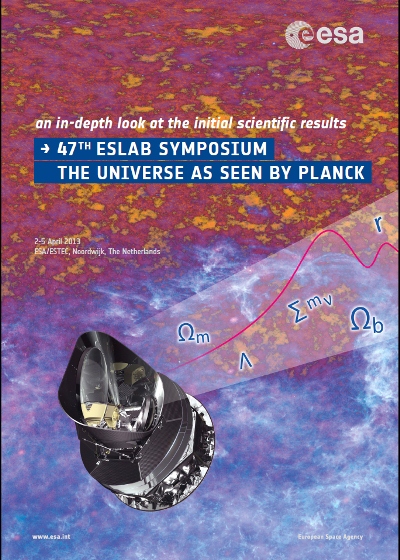 The objective of the conference is to present and discuss the initial science results from Planck, ESA's mission to map the anisotropies of the Cosmic Microwave Background. It is the first scientific forum where these results will be addressed, following Planck's first major release of data products and scientific papers in early 2013. It will cover both cosmology (based on analysis of the Cosmic Microwave Background) and astrophysics (based on analysis of foreground emission sources).

The Planck satellite was launched on 14 May 2009, and has been surveying the sky continuously since August 2009. The nominal duration of the mission was completed in November of 2010, but Planck still continues to gather data. Data processing has been progressing and a first set of cosmological-grade data products will be released to the astronomical community in early 2013. These products will consist mainly of temperature maps of the whole sky at nine frequencies between 30 GHz and 857 GHz, which allow us to extract a map of the temperature anisotropies of the Cosmic Microwave Background, as well as maps of many astrophysical foregrounds. The latter most importantly include synchrotron, free-free and dust emission from the Milky Way, radio and far-infrared emission from external galaxies, the characteristic signatures due to the Sunyaev-Zeldovich effect in clusters of galaxies, and the Cosmic Infrared Background. The Planck data therefore provide for an extremely broad range of cosmological and astrophysical science.