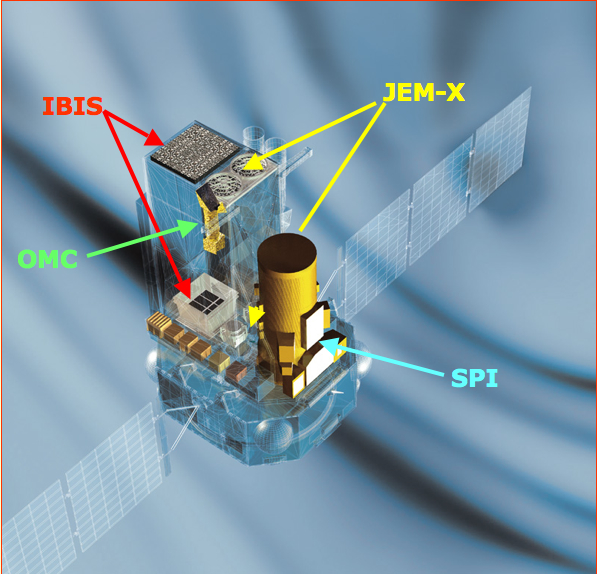 A particle radiation environment monitor (IREM) measures charged particles fluxes of the spacecraft orbital environment hence helping to assess the background and thereby the sensitivity and performance of the instruments.

The instruments were designed and built by extended consortia (see also the INTEGRAL Spacecraft, Launcher and Orbit pages) covering several countries within Europe for all instruments and for the main instruments also participants in the USA.

SPI, IBIS and JEM-X share a common principle of operation: they are all coded-mask telescopes. The coded-mask technique is the key which allows imaging, which is all-important in separating and locating sources. It also provides near-perfect background subtraction because, for any particular source direction, the detector pixels can be considered to be split into two intermingled subsets, those capable of viewing the source and those for which the flux is blocked by opaque mask elements. Effectively the latter subset provides an exactly contemporaneous background measurement for the former, made under identical conditions.

The layout of the payload module has been conceived in terms of a separate science-payload module containing the instruments. This module was integrated and tested independently and later incorporated into the spacecraft as a single unit. The interface to the satellite bus has been designed to be as simple as possible to reduce complexity, time scales and cost. To limit the costs of the mission the service module is a rebuild of the one developed for XMM-Newton.