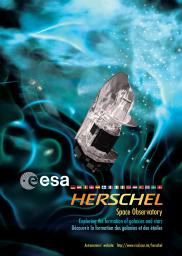 The Herschel Space Observatory is the fourth cornerstone mission in the ESA science "Horizon 2000" plan. It will carry a 3.5 meter passively cooled telescope, and will perform imaging photometry and spectrometry in the far-infrared and submillimetre part of the spectrum, covering the 55-672 micrometres range. The science payload consists of three instruments which will be provided by consortia led by Principal Investigators: The Heterodyne Instrument for the Far-Infrared, HIFI, whose PI is Th. de Graauw, SRON, Groningen, The Netherlands; the Photodetector Array Camera and Spectrometer, PACS, whose PI is A. Poglitsch, MPE, Garching, Germany; and the Spectral and Photometric Imaging REceiver, SPIRE, whose PI is M. Griffin, Cardiff University, UK. Herschel is the first space facility dedicated to the submillimetre and far-infrared, and will be operated as a multiuser astronomical observatory that will provide observation opportunities to the entire astronomical community. The launch is scheduled for 31 October 2008.

On 1-3 December 2004, the first Herschel Space Observatory Calibration Workshop was held in Leiden, the Netherlands. The workshop was the starting point for a number of projects and collaborations on the observation and modelling of astronomical sources that will be used in the calibration of the Herschel instruments. Now, within months of the planned launch date, the time is right to review the progress made since the previous workshop, to agree on the astronomical calibrators baseline, and to identify the next steps. It is with this purpose that the Herschel Space Observatory Calibration Workshop #2 was held on 6-8 February 2008 at CSIC (Madrid). The workshop counted on the participation of observers and modellers working on astronomical objects relevant for Herschel calibration, and of calibration scientists from Herschel and other far-infrared and submillimetre observatories.

The objectives of the Herschel Calibration Workshop #2 are:

The output of the workshop are the abstract book, the viewgraphs from the presentations, and a compilation of the requirements, actions and future steps as identified during the sessions and splinters.

The meeting was organized and led by the Herschel Calibration Steering Group. Contact points are: