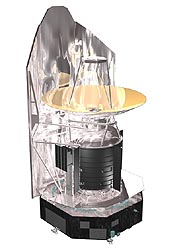 The `Herschel Space Observatory' (formerly known as FIRST) is the fourth cornerstone mission in the European Space Agency (ESA) science programme. It will perform imaging photometry and spectroscopy in the far infrared and submillimetre part of the spectrum, covering approximately the 55-672 µm range. 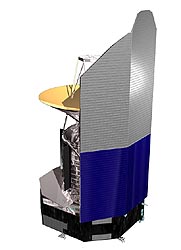 Herschel has the potential of discovering the earliest epoch proto-galaxies, revealing the cosmologically evolving AGN-starburst symbiosis, and unraveling the mechanisms involved in the formation of stars and planetary system bodies. The key science objectives emphasise specifically the formation of stars and galaxies, and the interrelation between the two, but also includes the physics of the interstellar medium, astrochemistry, and solar system studies.

Herschel was launched into a transfer trajectory towards its operational orbit around the Earth-Sun L2 point by an Ariane 5 ECA (shared with Planck) on 14 May 2009. Herschel is operated as an observatory facility. It is available to the worldwide scientific community, roughly two thirds of the observing time is 'open time' allocated through standard competitive calls for observing proposals.

A Herschel overview was given in the SPIE conference held in June 2008 in Marseille, France. The talk presented and a preprint of the paper published in Proc SPIE 7010 are available below: