On OD 320 the temperature of the star-tracker (STR) CCD was lowered, to mitigate the effect of hot flickering pixels. As a side effect this change slightly the focal length of the star tracker, hence introducing a shift in the reconstructed astrometry of Herschel maps when the distribution of tracking stars was not homogeneous in the STR field-of-view, up to 7-8 arcsec in the most extreme cases. A new model was uploaded on-board on OD762 to correct for this. For the interim period ODs 320 to OD761 new first order pointing products have been generated at HSC to correct this problem.

Below an example for a star (UZ Tau) in OD684, on the left the current HSA level 2 blue channel (70 microns) maps and in the right processed with the new pointing product. The absolute astrometry offset is reduced from 7.5 arcsec to 1 arcsec.

More details are provided in the Release Note v1.0 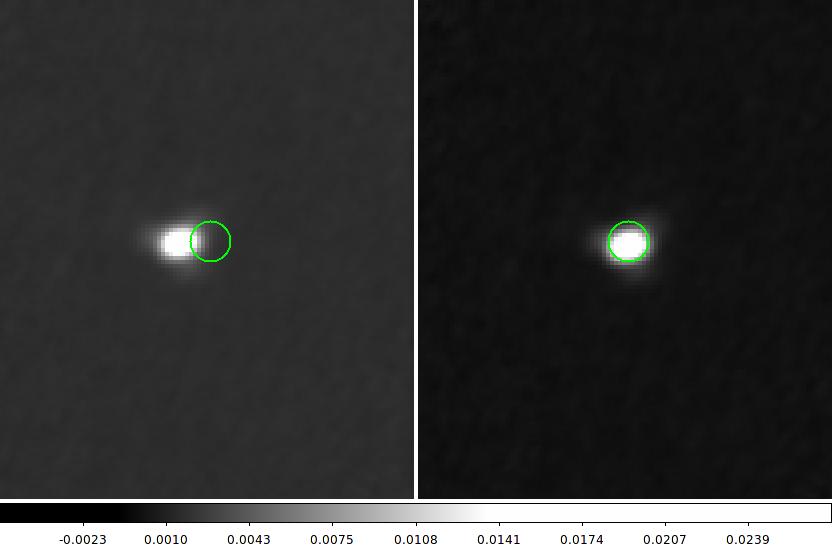 Here is a SPIRE example: PSW map GammaDra from OD450 with/without improved pointing correction: although from the circle looks like there isn't any significant offset change, it is possible to appreciate the (tiny) difference in flux distribution in the pixels. 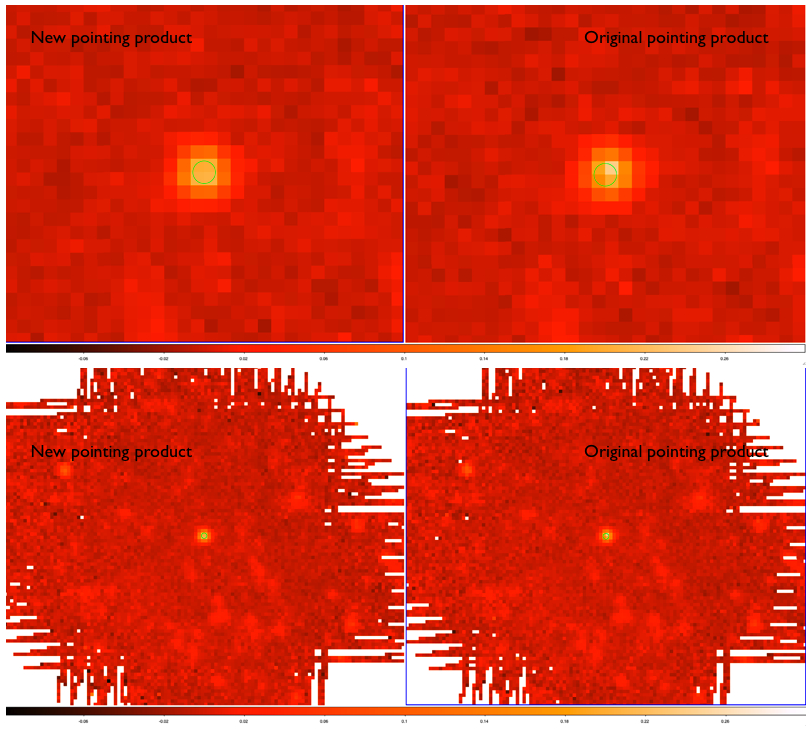 The new pointing products are posted on ftp://ftp.sciops.esa.int/pub/msanchez/corrected_pointing_od320_761/

Replace the line extracting the pointing product : by: where nnn is the OD number

Note that if you use the SPG pipeline scripts, the pointing product is read twice in L05_phot.py and L1_scanMapPhotProject.py, hence the line must be commented out in the second script.

How to use the new pointing product for PACS spectrometer observations

Load the new pointing product : where nnn is the OD number

You need to replace

How to use the new pointing product for SPIRE observations

by: where nnn is the OD number. This approach is applicable for both the SPIRE photometer and the SPIRE spectrometer processing.

How to use the new pointing product for HIFI observations

The new pointing products need be applied to the level0 products. The following code indicates how to reprocess a given observation with the new astrometry. Note that you can restrict yourself to the backends you want to update, however be aware that the ra/dec meta-data keywords of the observation context will be based on the average of the level2 products of all spectrometers, so it will reflect the astrometry shift only if all backends are fully reprocessed.

The following plot illustrates the case where the largest shift was observed (obsid 1342203210): the blue dots show the position with the old pointing products, while the red dots show the new position. It is also possible that the position shift is not homogeneous over a given map (see example for obsid 1342207386), so if you have large maps please check carefully whether this can be the case. 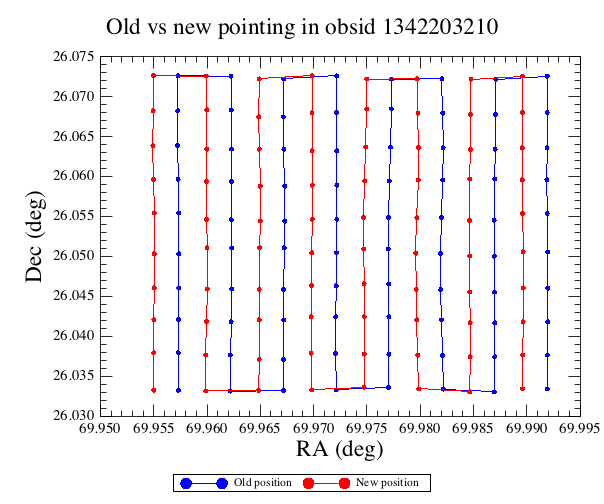 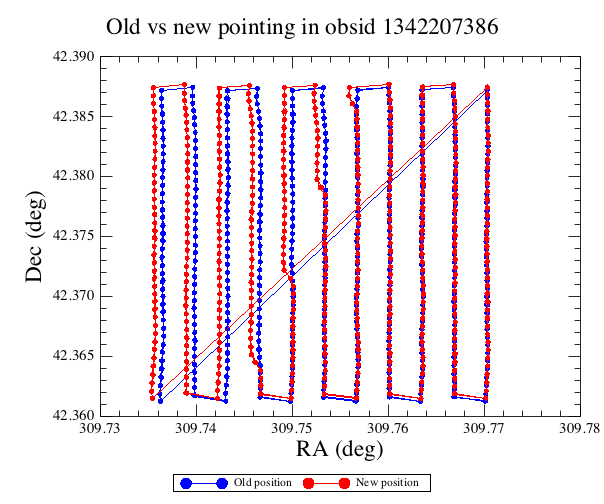 A main component of the Attitude Control and Measurement System (ACMS) is the star-tracker (STR; two units present on-board Herschel, prime and backup). The STR is a small optical CCD camera plus an image processing unit that, starting from an image of the sky, extracts the attitude information measured with respect to the J2000 inertial reference system and delivers it to the Attitude Control Computer (ACC). At the start of the mission, the STR CCD reference temperature was 20 deg C. An effect that was observed along the first months of S/C operations was the sporadic occurrence of distortions in the scan map patterns accompanied by variations in the tracking angular rate (the so-called 'speed bumps'). These events were eventually tracked to the existence of transitory 'warm pixels' (not flagged as 'hot' ones in the defective pixel table). In order to reduce the number of warm pixels, the STR CCD reference temperature was lowered in operational day (OD) 320 from 20 to -10 deg C. The 'speed bumps' were eventually corrected, but at the price of augmenting the STR plate scale errors that produced systematic but boresight-dependent offsets.

The new (low) temperature setting had a negative impact on the S/C absolute pointing accuracy due to increased plate scale errors in STR. In OD 762, a simple, 1D correction (i.e. the same linear correction factor in the Y and Z STR axes) was uploaded to the S/C ACMS and the performance was substantially improved. In OD 858 an enhanced 2D correction (different linear factors in the Y and Z axes) was successfully tested; the change was made permanent in OD 866. Eventually, in OD 1011, a full STR focal plane (FP) distortion correction was made operational. Moreover, in OD 1032 the STR catalogue was purged by removing 73 'dubious' stars from the tracking list.

Several groups within the Herschel Ground Segment are currently working in the a posteriori improvement of the S/C attitude, coordinated by the Herschel Pointing Working Group. This is specially important for observations obtained in the period OD 320 - OD 761, as explained above.

The pointing products produced by the software described in this note intend to provide a first, yet crude correction of the systematic, boresight-dependent effects introduced by the STR plate scale errors.

The current version of the software is mainly intended to alleviate the problems derived from the large STR plate scale errors existing in the period OD 320 - OD 761. A correction has been computed for the period OD 762 - OD 865 (excluding OD 858), but its actual usefulness is still under evaluation and no new pointing products have been made available in the ftp area for that range of ODs.

Finally, for ODs before 320, no STR FP correction is available yet but it is expected in a near future. As soon as it is included in the processing software, new pointing products will be generated. Nevertheless, it is advisable to use it only in extreme cases, where large pointing offsets are suspected.

It is intended to use the new pointing products in the upcoming (v9.x, TBD) HSA bulk reprocessing. Therefore, no pointing product replacement will be required for products retrieved from the HSA processed with SPG v9.x.

The applied correction does not add noise to the attitude samples since is a purely geometric one. When the correction factors are set to 1.0, one recovers exactly the input attitude (within ~1.0e-10 arcsec).

In the current implementation, the processing script is not distributable to end- users since it requires the proprietary STR catalogue.

The software described here is just a first step in a long-term strategy to improve the S/C attitude estimation and hence the astrometry of the science products. It is expected to have further releases of the current software that will include things like:

Future software tools will include a more sophisticated processing based on batch attitude estimators. The construction of such software is currently being started.

Do not apply the new pointing products blindly. If you are happy with the current astrometry of your observations, it is probably not worth to reprocess the data. In case of doubt, contact the HSC Helpdesk for advice.

STR-induced offsets for observations in the period OD320-761

The files linked below list the expected STR-induced offsets at the nominal RA, DEC coordinates (i.e. those entered as "target" coordinates in HSPOT) for all observations in the range OD 320-761, in comma-separated format (readable in Excel, Open Office, TOPCAT and many other common tools).