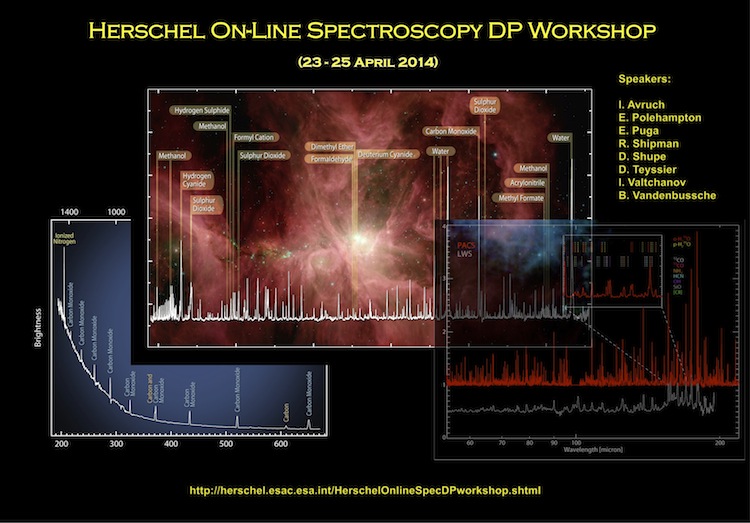 Successfully launched together with Planck on 14 May 2009, Herschel reached the end of its operational lifetime on 29 April 2013, after the exhaustion of its supply of liquid helium coolant, completing almost 4 years of pioneering observations of the cool Universe. Indeed, Herschel has made over 37 000 scientific observations, amassing more than 23 000 hours' worth of science data from about 600 observing programmes, all of which is already publicly available from the Herschel Science Archive. Although Herschel observing is now finished, the data collected by this wonderful mission will enable a vast amount of exciting science to be done for many years to come. We expect that it will provide even more discoveries that have been made during the lifetime of the Herschel mission. Our task is now to make the treasure trove of Herschel data as valuable as possible.

This workshop, organised by the Herschel Science Centre, in collaboration with the Instrument Control Centres and the NASA Herschel Science Centre, is targeted at an audience of users with some previous experience in Herschel spectroscopy and the use of HIPE (Herschel Interactive Processing Environment) interested in learning about the latest improvements on the pipeline processing and on the interactive data reduction and data analysis of Herschel spectroscopic observations using the latest version of HIPE (v12.0). We invite preferentially young astronomers who have recently started working on projects based on the analysis of Herschel spectroscopic data.

The workshop, which can only be attended on-line, will consist of a mixture of demos and tutorials in the format of presentations that will be broadcast live. The sessions will address a wide variety of instrument-specific data reduction topics, covering the most frequent aspects that need to be considered when analysing Herschel spectroscopic data.