Herschel pointing performance (current and past)

The present absolute pointing performance is measured as APE ~ 0.8 arcsec (1-sigma) since OD1011. Regarding the historical evolution, we can distinguish five different periods:

From launch to OD320

The most representative APE estimate was derived using PACS photometer point source observations during the Performance Verification (PV) Phase. A large set of observations (some 250) in six ODs (38, 64, 86, 92, 101 & 104) were used to derive the PACS photometer P01_0 aperture position and also the absolute pointing performance figure. In addition, a large pointing campaign was implemented in OD274 to determine the pointing performance depending on the STR interlacing (il) mode: il-disabled (up to 9 stars tracked at a time, at 2Hz sampling rate) and il-enabled from 15 to 18 stars sampled alternatively in two "planes", at 1Hz rate). The results are summarized below:

Therefore, it is safe to assume APE ~ 1.9-2 arcsec for that period.

The event marking the onset of this long period is the lowering of the STR CCD reference temperature from 20 to -10 deg C. This was done to alleviate the effect of warm pixels when doing scan maps. The (in)famous speed bumps got corrected, but at the price of augmenting the STR plate scale errors that produced systematic but boresight-dependent offsets.

Shortly after the STR CCD temperature adjustment (OD385) we started to perform routine pointing calibration observations, performed within the daily telecommunications period (DTCP) allowed sky area, to verify the apertures' alignment and pointing performance. The plate scale errors translated into variations of the dispersion of the distribution of pointing calibration observations; nevertheless, the behaviour was not straightforward to explain: while in cycles 15-22, the APE was consistent with PV results, an outstanding increase was observed in cycles 23-31 and a decrease thereafter, as summarized in the table below:

An average of a large subset of observations in cycles 15-40 was performed (comprising nearly 200 observations). This is considered a representative value of the mean absolute accuracy achieved in this period. The largest outlier is at nearly 7 arcsec from the barycenter of the distribution, a value that is consistent with some extreme cases reported by observers: 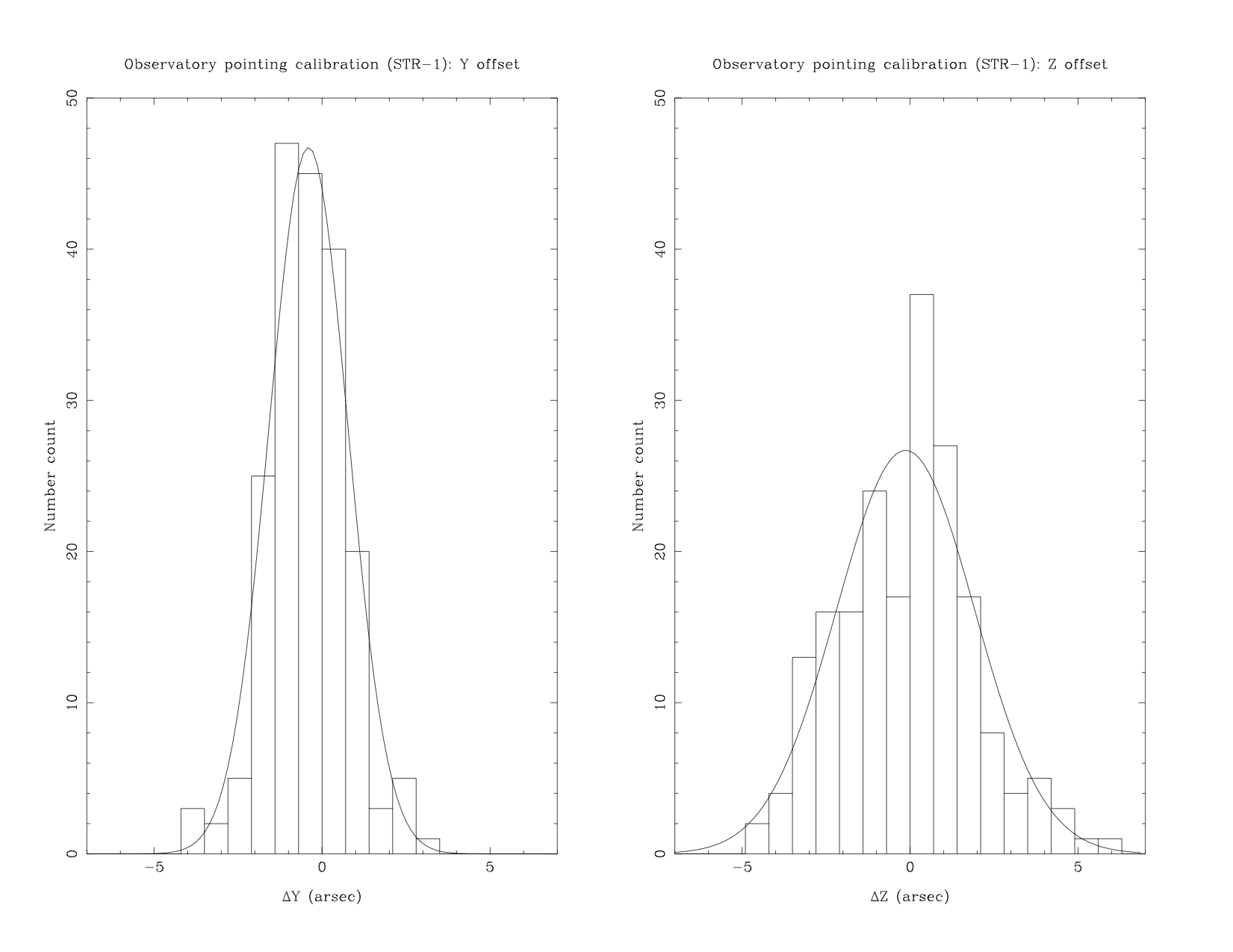 A first on-board corrective action was performed in OD762, by up-loading a common (for both Y and Z axes) correction factor. The pointing performance was revisited in OD764 (42 pointing calibration observations), with very positive results, as shown below: 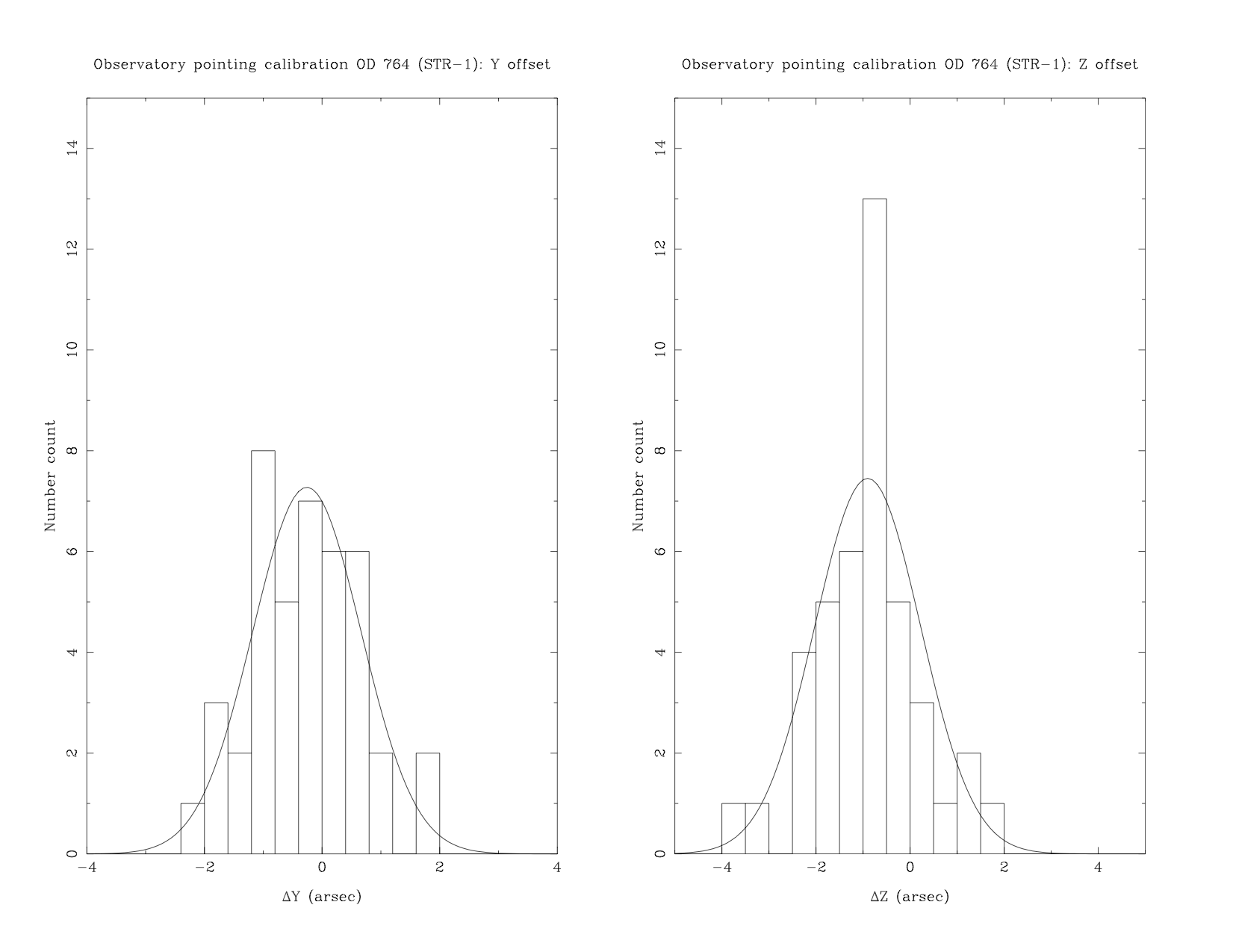 The 2D correction (i.e. separate correction factors to the Y and Z axes) was tested in DTCP858. The first assessment done by FDS was very positive. The pointing performance was verified in OD858 by means of of 43 pointing calibration observations, and the results pointed towards sub-arcsec accuracy; the change was made permanent in OD866. Subsequent checks pointed towards an APE around 1.1 arcsec. 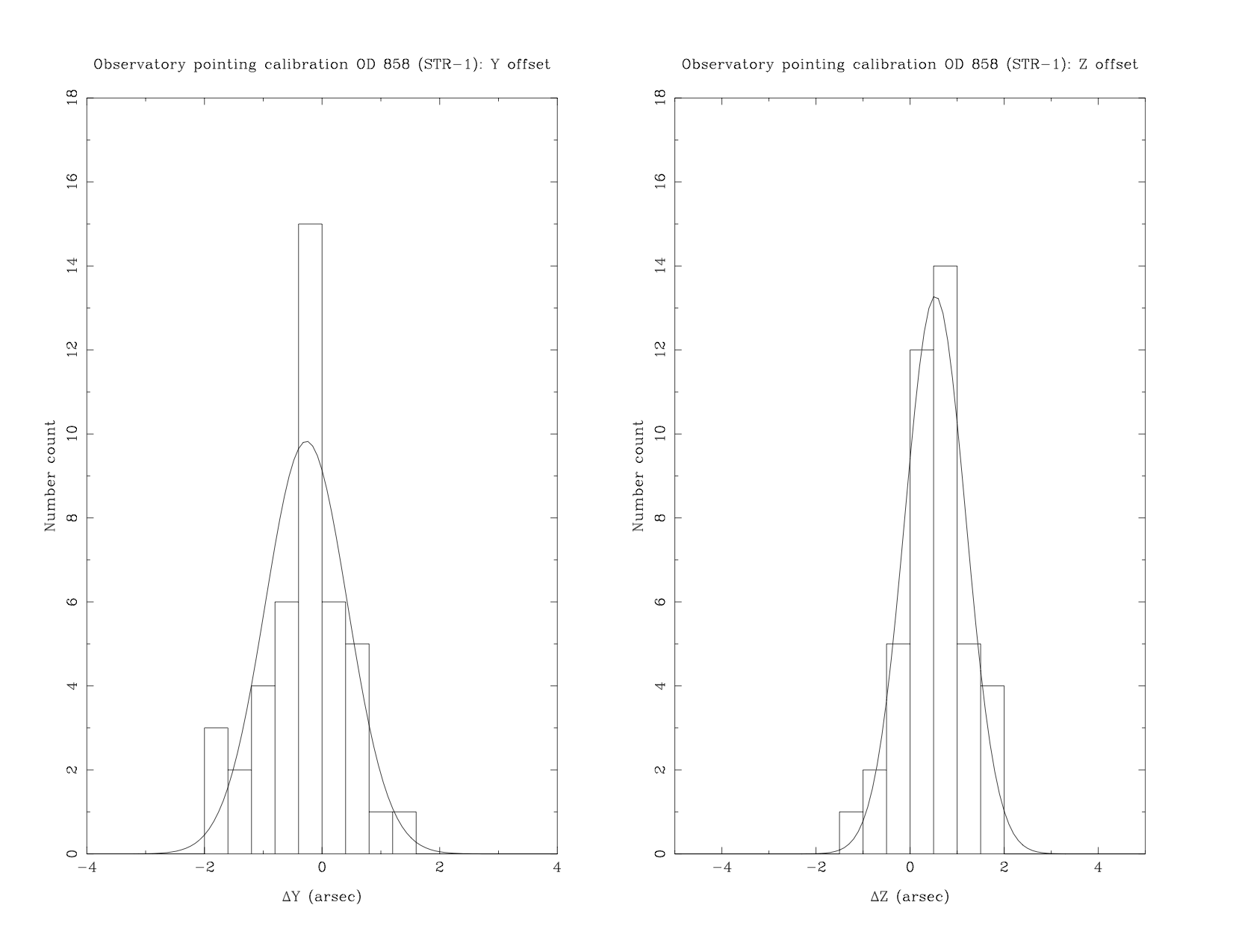 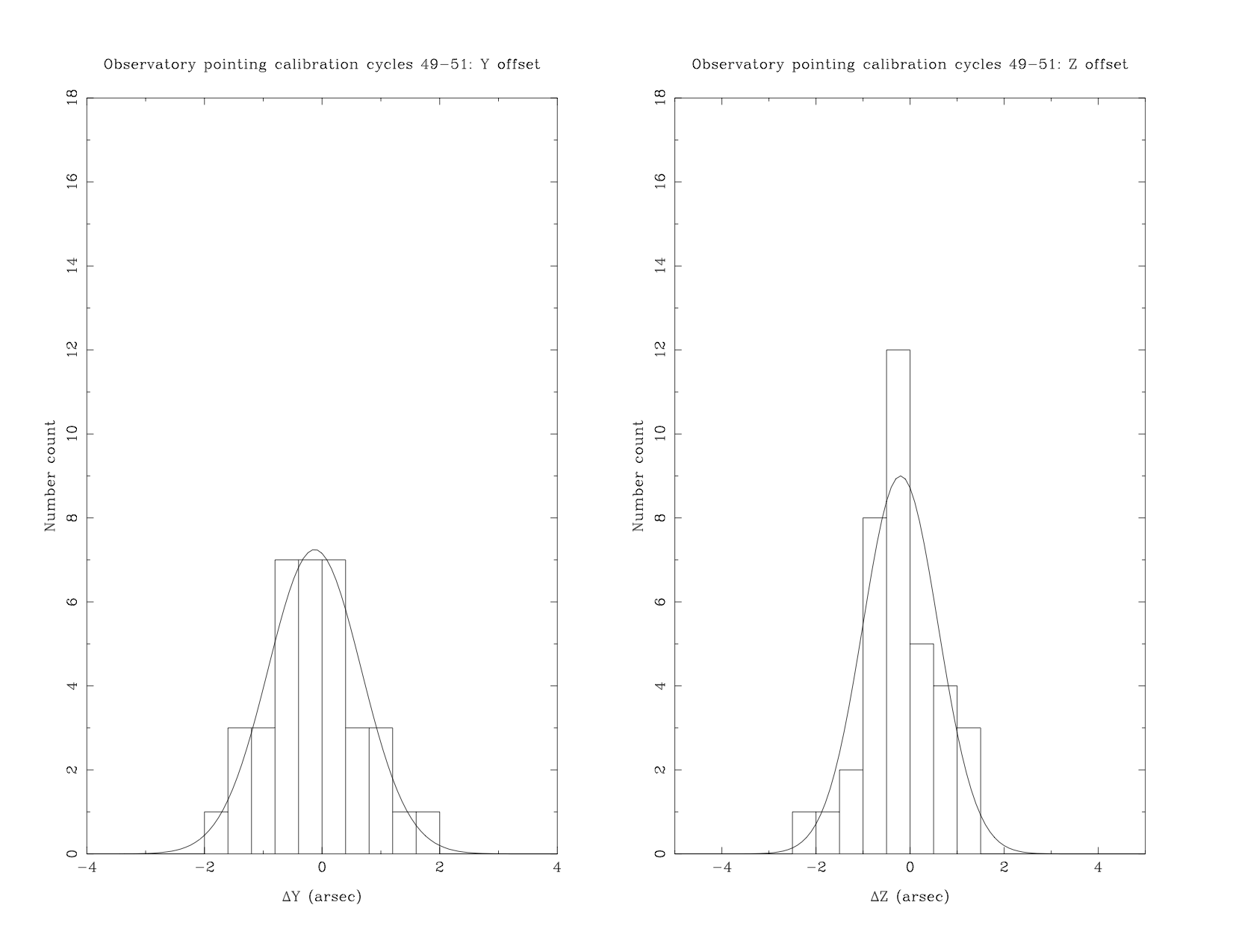 In a third step (since OD1032), several (73) stars from the STR catalogue that were deemed by the PACS ICC as “dubious” due to positional uncertainties and/or high proper motions were removed from the tracking catalogue (the “tracking flag” was set to zero, and thus the stars can be used for acquisition but no longer for guiding), arriving to a final figure APE ≈ 0.8 arcsec, quite homogeneous across the sky (assuming that a sufficient number of tracking stars are available). This value can be used as a proxy of the current S/C absolute pointing accuracy.

The relative pointing accuracy, as measured by the Spatial Relative Pointing Error (SRPE) has been only estimated for small raster maps (nodding observations with 52 arcsec throw). Nevertheless, even such a small size can yield representative SRPE results since the scale is larger than the usual STR bias stability range (some 10 arcsec). Only two estimates have been done at present:

This figure was measured by means of 58 observations (towards 29 targets, at 70º and 110° tilt angle) in mini-map mode (leg length 3 arcmin, 2 legs, 4 arcsec separation). Each scan direction was processed independently. The images were drizzled with pixfrac=0.1.

All the observations were gathered between OD320 and OD762 (2nd period in the discussion above), so it is expected that the plate scale error effect has an impact on the results, that are on the other hand equivalent to those obtained using the PACS photometer point source mode, as shown below:

New PACS-P mini-map measurements taken in cycles 64-71 (45 observations) confirm that, after the corrections applied to the on-board STR parameters, the Herschel scan map APE has substantially improved, and now a figure of ~1.1 arcsec can be considered as reference for such observations.

The relative pointing error (RPE) or pointing stability (that measured on short periods of 1 minute) has been measured during PV phase and found to be below the requirement of 0.3 arcsec: RPE=0.189 arcsec for α Boo and RPE = 0.287 arcsec for the asteroid 19 Fortuna.