Herschel's 'sneak preview': a glimpse of things to come - Herschel

Herschel's 'sneak preview': a glimpse of things to come

Herschel opened its eyes on 14 June 2009, precisely one month after the launch from Kourou, as the cryocover, the cryostat lid, was commanded to open (see Latest News). During the remainder of the operational day (OD#32, 14-15 June) after the cryocover opening Herschel carried out test observations labelled a 'sneak preview' making use of time initially allocated to 'thermal stabilisation', following a request to attempt producing an early observational result.

In order to maximise usefulness it was decided to perform photometry of a nice-looking source for which there would be good comparison material available from another instrument at the same observing wavelengths. After a trade-off of potential targets it was decided to attempt mapping M51 with the Herschel/PACS instrument. M51 is a very well-known nearby 'grand spiral', called the 'Whirlpool Galaxy'. It was confirmed visible from Herschel at the time, and it has been observed with Spitzer/MIPS by the SINGS consortium. Furthermore, and possibly less well known, M51 was the first galaxy for which spiral structure was ever observed, by Lord Rosse using the first telescope ever constructed larger than William Herschel's largest.

When the observations were planned success was uncertain at best, the attempt in effect being premature given the state of commissioning performed. The major uncertainties were related to the expected telescope optical background, and the location of the PACS field of view on the sky with respect to the nominal spacecraft pointing. Although the size of M51 is 'only' approximately 10 arcmin scan-mapping of a field 50x50 arcmin on the sky was performed, with the target nominally in the centre. The large size map reflected the maximum 'worst case' uncertainty in the pointing (actually in the knowledge of the 'angle' between the PACS and startracker FOVs). Since a large range of possible values for the optical (telescope) background was estimated, the observation was carried out repeatedly with different instrument bias settings in the hope that some of them would be near correct, or at least produce usable data.

In addition to performing the observations, the data needed to be processed in order to generate interpretable results. This has been performed by a large team of dedicated people and the results exceeded all hopes: it has been possible to produce M51 images at all three Herschel/PACS photometric bands centred at 70, 100, and 160 µm. With the help of these images and by comparison with the corresponding Spitzer/MIPS images a preliminary qualitative assessment of the optical performance of Herschel can be undertaken. 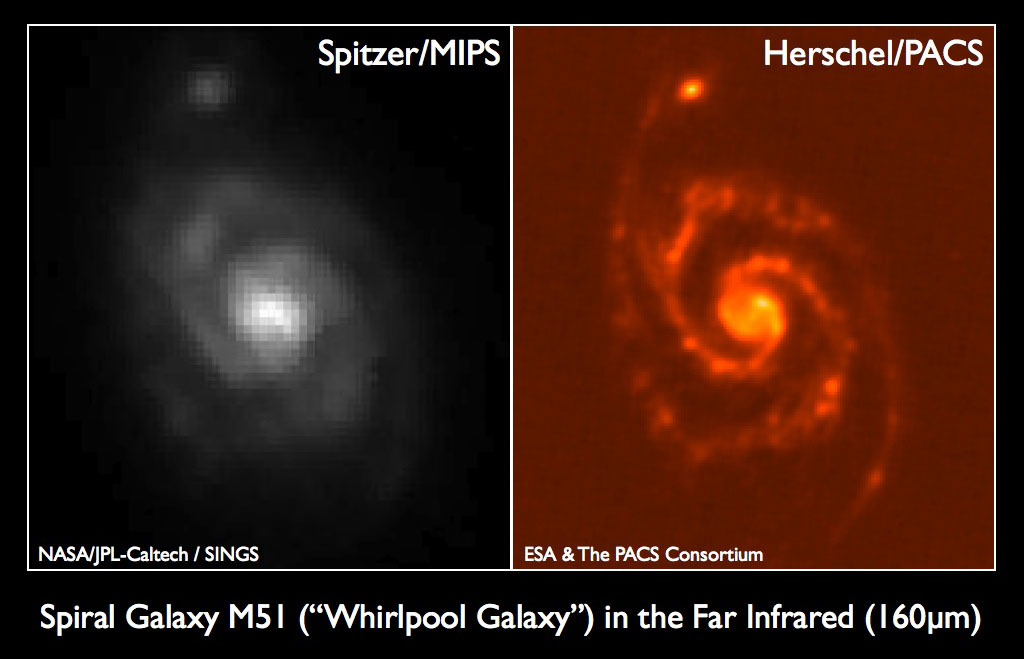 Above the Spitzer/MIPS and the Herschel/PACS images of M51 at 160 µm. The advantage of the larger size of the Herschel telescope is clearly reflected in the much higher resolution of the image: Herschel reveals structures that cannot be discerned in the Spitzer image.

Since the Spitzer optical performance is known to be very good at all wavelengths in common with Herschel, it can serve as an accurate reference for evaluating the performance of Herschel. In contrast to the Spitzer telescope, the Herschel telescope is totally passive without any means of adjusting in-flight, thus it is of considerable interest to confirm that it is performing well optically and that it is aligned correctly with the instruments. This could never be optically end-to-end tested before flight, it was verified by testing at instrument and telescope levels, and by careful measurements and thorough analysis of the as-built alignment. 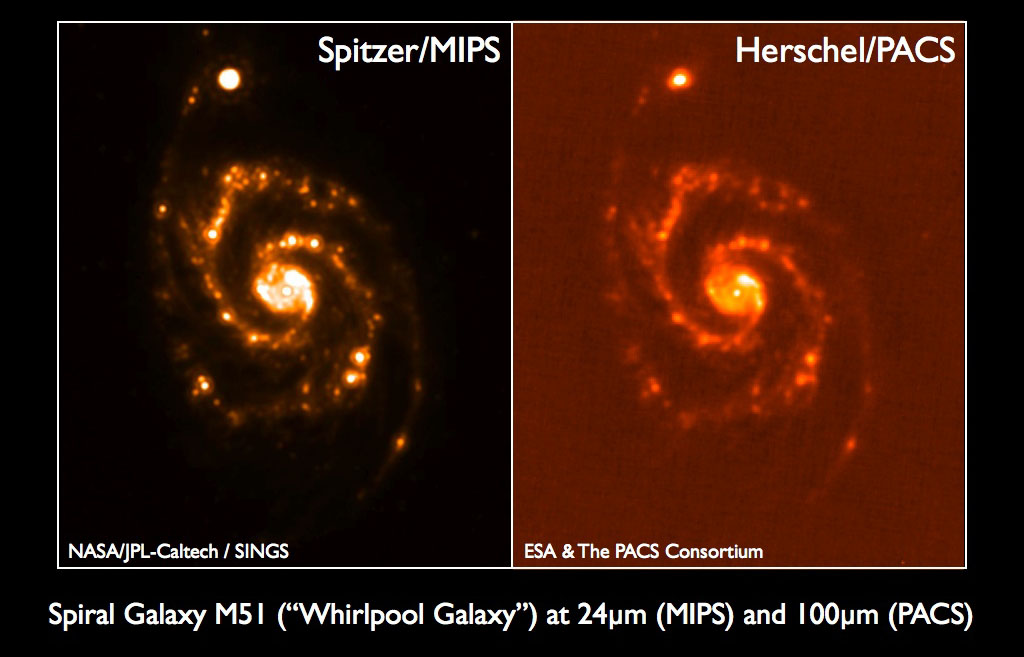 By performing a visual inspection of the images above, Spitzer/MIPS at 24 µm and Herschel/PACS at 100 µm, it can be concluded that they have a generally similar appearance. Since the ratios of both the aperture sizes and the observing wavelengths are approximately four, it can be concluded that Herschel is performing well optically at 100 µm, which is a short wavelength for Herschel. 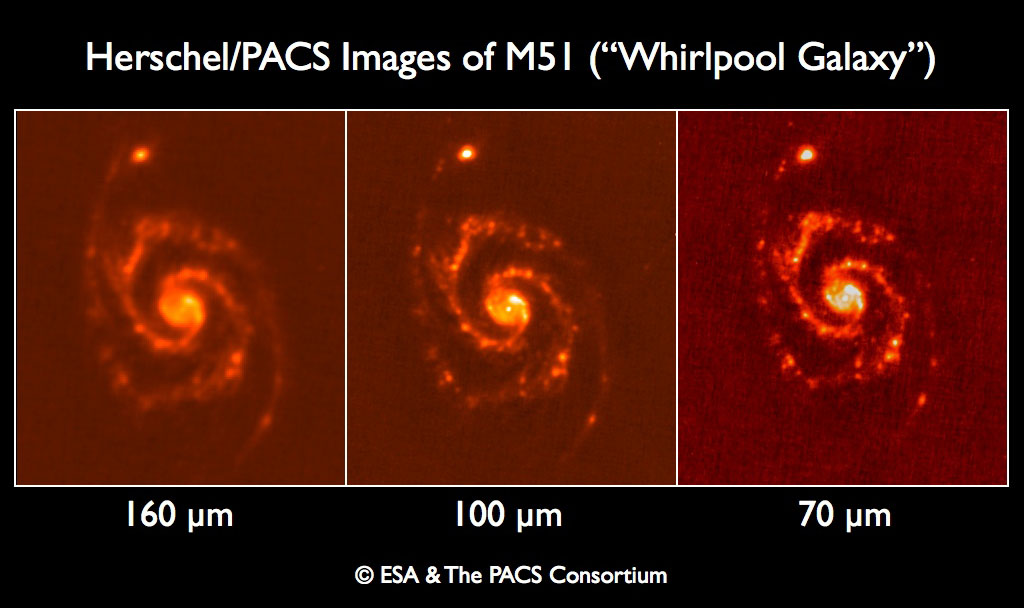 Furthermore, by visual inspection of all three Herschel images above, it can be concluded that the resolution in the 70 µm image is superior to that of the 100 µm image, as expected if Herschel is performing well optically all the way down to the shortest wavelength. That this appears to be the case, even in this very preliminary assessment, is major milestone for Herschel! 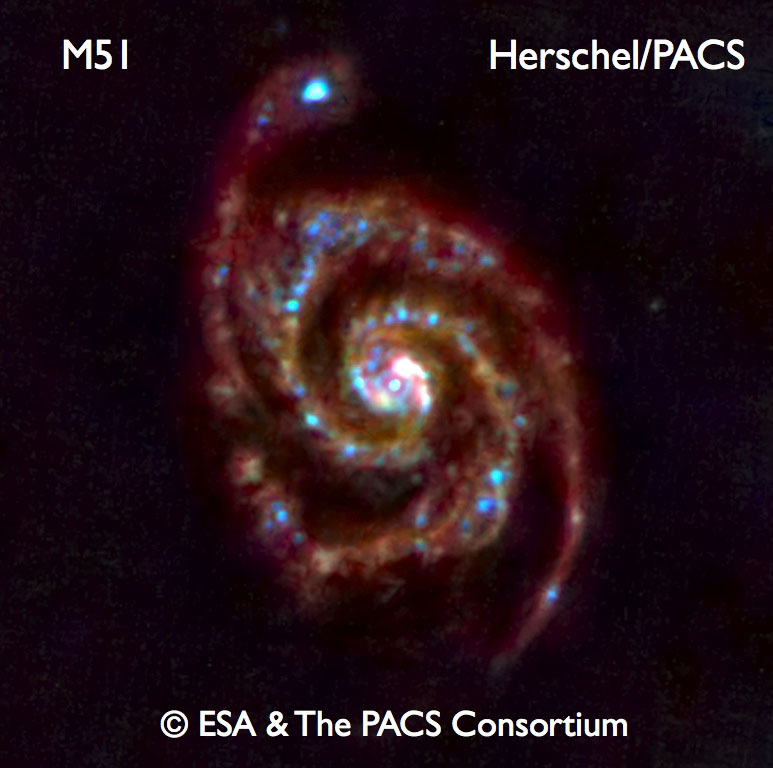 Finally, the three Herschel/PACS images have been combined into a composite image of M51. The red, green and blue colours in this image correspond to the 160, 100, and 70 µm wavelength bands of the Herschel/PACS instrument. At these wavelengths the glowing light from clouds of dust and gas around and between the stars can be seen. These clouds provide the reservoir of raw materials for the ongoing star formation in this galaxy. Blue colours indicate regions of warm dust that is heated by nearby young stars, while the colder dust in other parts of M51 shows up in red.

What started as an attempt to do something next to impossible, has generated results that are more than encouraging for the tasks ahead. The 'sneak preview' begs for more!

The Herschel observations were carried out as part of the commissioning of the observatory. The scientific rights of these observations are owned by the Guaranteed Time Key Programme consortium Physical Processes in the Interstellar Medium of Very Nearby Galaxies lead by Christine Wilson.

The Spitzer observations were carried out by the 'Spitzer Infrared Nearby Galaxies Survey' (SINGS) consortium lead by Robert Kennicutt, and the images used here are publicly available on their website.