The Herschel 'sneak preview' images of the nearby 'grand spiral' galaxy M51 at 70, 100, and 160 µm captured by the Herschel/PACS photometer and very quickly successfully processed on the ground demonstrated good overall performance in many crucial respects for Herschel as an observatory. In particular very promising optical performance was indicated by comparison with existing Spitzer/MIPS images. These Herschel/PACS images gave an exciting glimpse of things to come in a part of the far infrared spectrum where observing capabilities have been provided in the past with smaller aperture telescopes, demonstrating the power and good performance of Herschel's large telescope.

Providing a large telescope in space is a very important facet of Herschel, but just as important are pushing into the submillimetre part of the far infrared spectrum for the first time and providing instrumental capabilities never before realised in a space observatory. Building on the achievement of the 'sneak preview' Herschel has now gone further and ventured in several directions into previously virgin territory!

Herschel/SPIRE photometry of nearby galaxies

The SPIRE instrument on board Herschel has made its first test astronomical observations, with spectacular results. The SPIRE photometer performs broadband imaging at 250, 350, and 500 µm simultaneously, it is designed to observe emission from clouds of dust in regions where stars are forming in our own and other galaxies, nearby and distant. During OD#42 (24 June) SPIRE was able to observe the sky for the first time. Herschel was trained on two galaxies located in a convenient part of the sky just to get a first impression of what SPIRE could see. Scan-mapping with cross-scans of fields 20x20 arcmin around the target galaxies M66 and M74 were performed. The data were processed and images were made with 'naive' mapmaking algorithms. The results were better than anyone expected from first-look observations, made before any attempt to set up the instrument or to tune the image-making software. The target galaxies showed up prominently, providing by far the best images yet seen at these wavelengths, and many other, more distant, galaxies were also seen in the field of view. 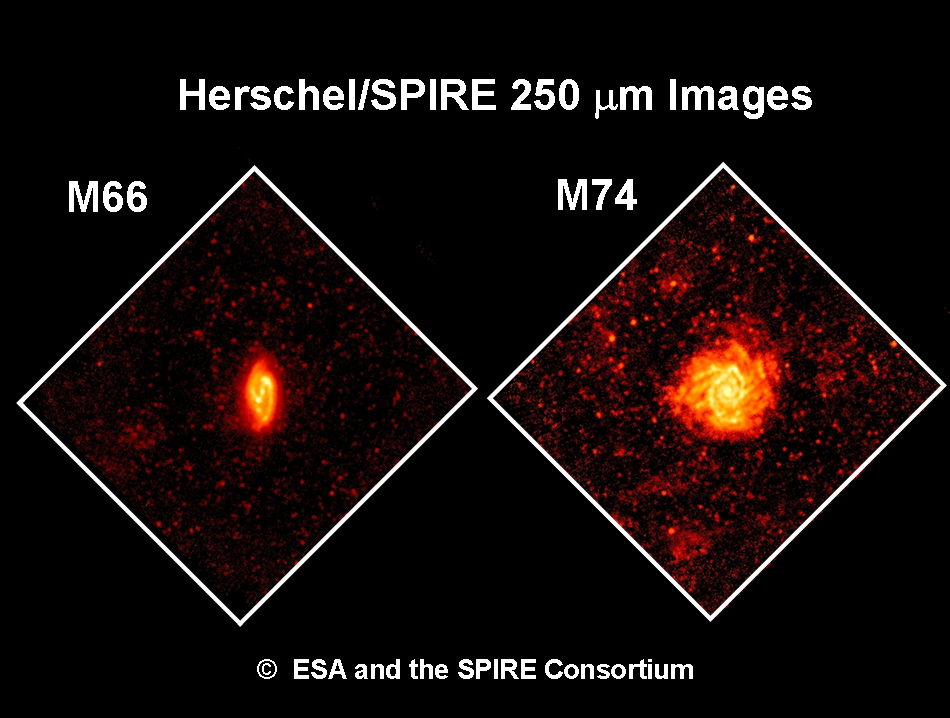 The picture above shows SPIRE images of the two nearby galaxies, M66 and M74, at a wavelength of 250 µm. The images trace emission by dust in clouds where star formation is active, and the nucleus and spiral arms show up clearly. Dust is part of the interstellar material that fuels star formation, and these images effectively show the reservoirs of gas and dust that are ready to be turned into stars in the galaxies. Very significantly, the frames are also filled with many other galaxies which are much more distant and only show up as point sources, and there are also some extended structures, possibly due to clouds of dust in our own galaxy.

These images provide astronomers with an exciting foretaste of the exciting scientific studies planned with Herschel in general and SPIRE in particular: looking at star formation close up in our own galaxy and in nearby galaxies, and searching for star-forming galaxies in the very distant Universe. Because these galaxies are so far away, their light has taken a very long time to reach us, so by detecting them we are looking into the past and learning how and when galaxies like our own - the Milky Way - were formed. 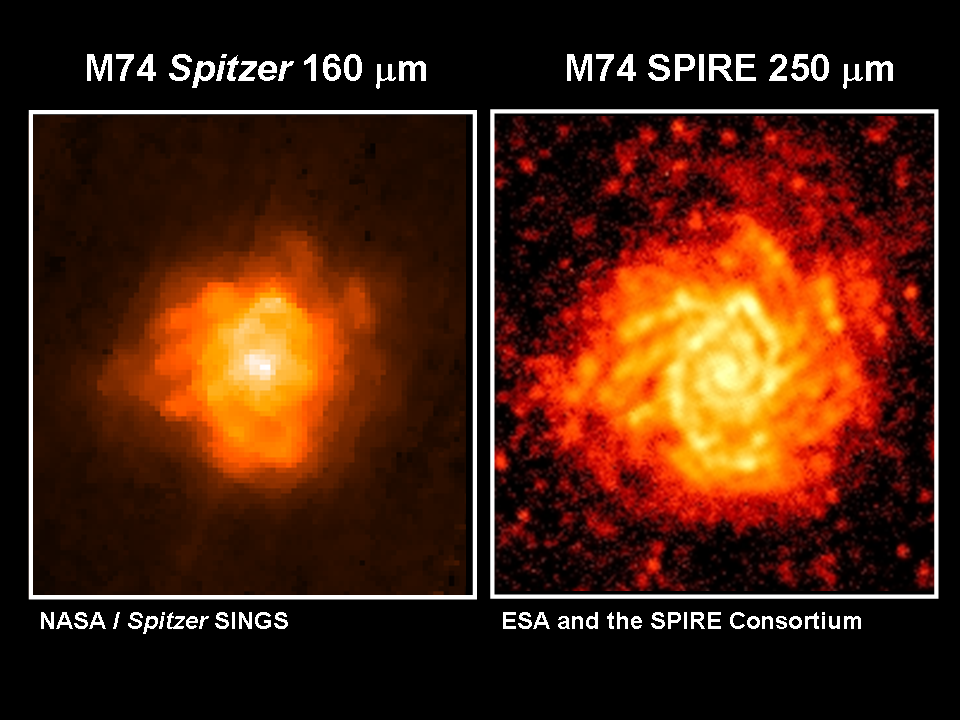 To illustrate the advances made by Herschel, the pictures above compare the SPIRE image of M74 with the best previous image in a nearby part of the spectrum, made by NASA's Spitzer space observatory at a wavelength of 160 µm, the longest provided by Spitzer/MIPS. The differences in the two images are attributable to the much larger Herschel telescope and to SPIRE's highly sensitive detectors. 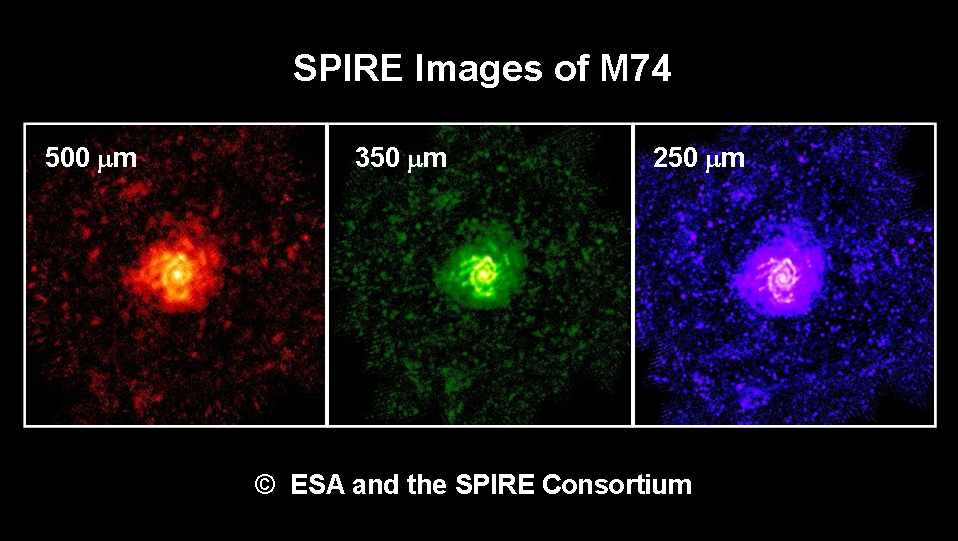 The picture above shows SPIRE images of M74 at all its three wavelengths, scaled to bring out the extended structure of the galaxy and to show more detail in the background sky. The image quality is of course best at 250 µm, the shortest wavelength. By combining the data from all three images, the properties of the emitting dust can be studied and the nature of the many distant galaxies that also appear in the pictures can be addressed.

While both the PACS and SPIRE instruments are imaging instruments designed to cover large areas of real estate on the sky, Herschel's third instrument HIFI provides complementary extremely high resolution spectral information on selected targets. HIFI is a unique instrument for a space observatory, offering heterodyne spectroscopy at frequencies never before available and with a wide spectral coverage which will enable detailed study of the dynamics and astrochemistry in a wide variety of astrophysical objects in our solar system, our galaxy, and beyond.

For its 'first-light' observation on OD#39 (22 June) HIFI was pointed at the giant molecular cloud DR21. Deeply hidden within the cloud newly formed massive stars are wreaking havoc on their stellar nursery. 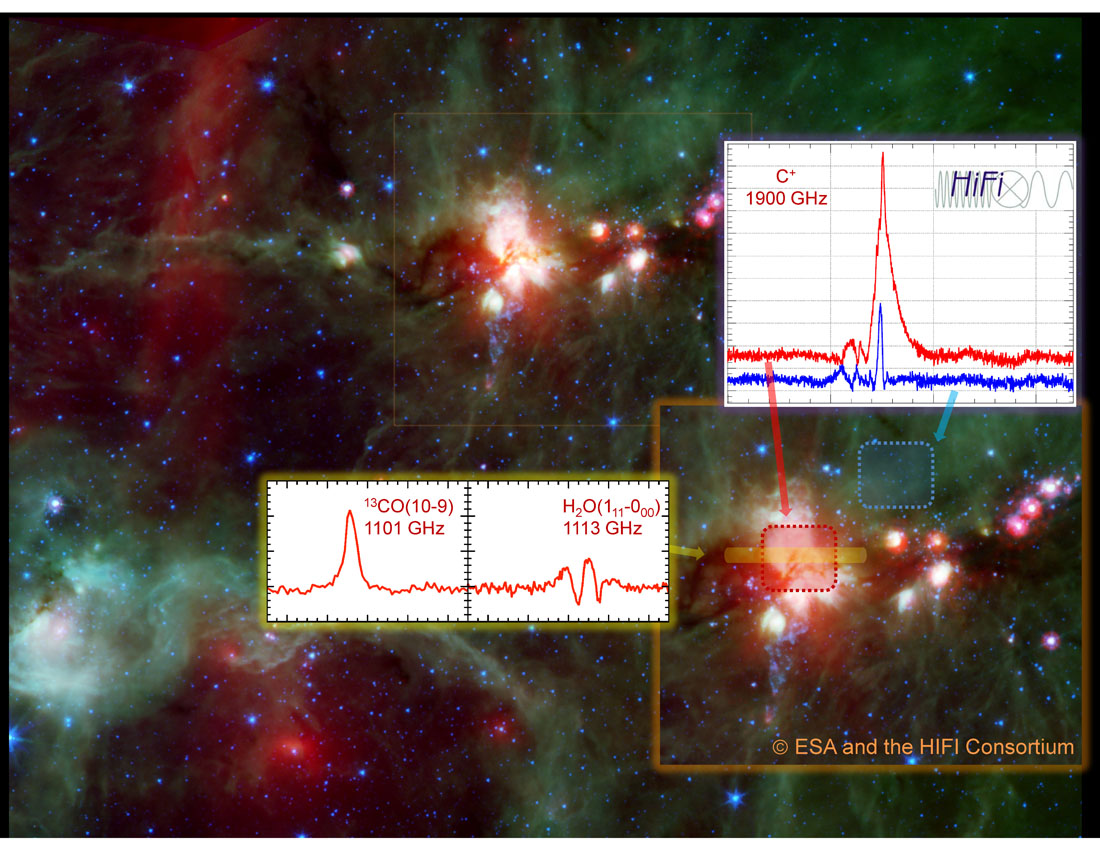 In the composite image above HIFI spectra are overlaid on a Spitzer image at wavelengths much shorter than Herschel can observe. The Spitzer image shows the DR21 star forming region in false colours (IRAC 5.8 µm in blue and 8.0 µm in green, and MIPS 24 µm in red), the green reveals the emission from large molecules set aglow by the newly formed stars. The large bubbles and striated appearance of the cloud are caused by the complex dynamical interaction of the newly formed massive stars and the environment from which they formed. At bottom right there is a blow up of the active region where all these interactions are taking place, which is exactly what HIFI has been designed to study.

The observations were performed as part of the initial testing of different HIFI observing modes. The blue and red boxes show the areas that have been surveyed for ionized carbon (C+ at 1900 GHz), a key diagnostic of the molecular cloud material. These observations were performed as a fast double beam switch raster map. The broad line at the position of the newly formed star (in red) reveals the presence of a powerful wind ripping the cloud apart. In contrast, the off-star position (in blue) shows emission from quiescent material, which has not (yet) been disturbed by this star. The yellow stripe indicates the region studied in lines of water (H2O (111-000) at 1113 GHz, right) and carbon monoxide (13CO (10-9) at 1101 GHz, left) by HIFI. The large width of the carbon monoxide profile and the complex and distorted water line again indicate that this material is part of a massive outflow from the newly formed star.

Both PACS and SPIRE can be operated as either photometers or imaging spectrometers. On OD#41 (23 June) the PACS integral field spectrometer was used for the first time for a test observation. The PACS spectrometer images a field on the sky in the light emitted by an individual spectral line, which can be used to diagnose physical properties and chemical composition.

The 'first-light' observation for the PACS spectrometer was performed of NGC6543 in the constellation of Draco, also known as the 'Cat's Eye' nebula, which was first discovered by William Herschel in 1786. The 'Cat's Eye' is a planetary nebula, consisting of a glowing shell of gas and plasma formed around an evolved star, and is a very well studied object, perfectly suited for observation with a new observatory. ESA's Infrared Space Observatory (ISO) already performed spectroscopic observations in the far-infrared on it and found bright line emission. However, at these long wavelengths with a 60 cm telescope ISO could not resolve any structure in, but with the help of Herschel's 3.5 m telescope the PACS spectrometer might. 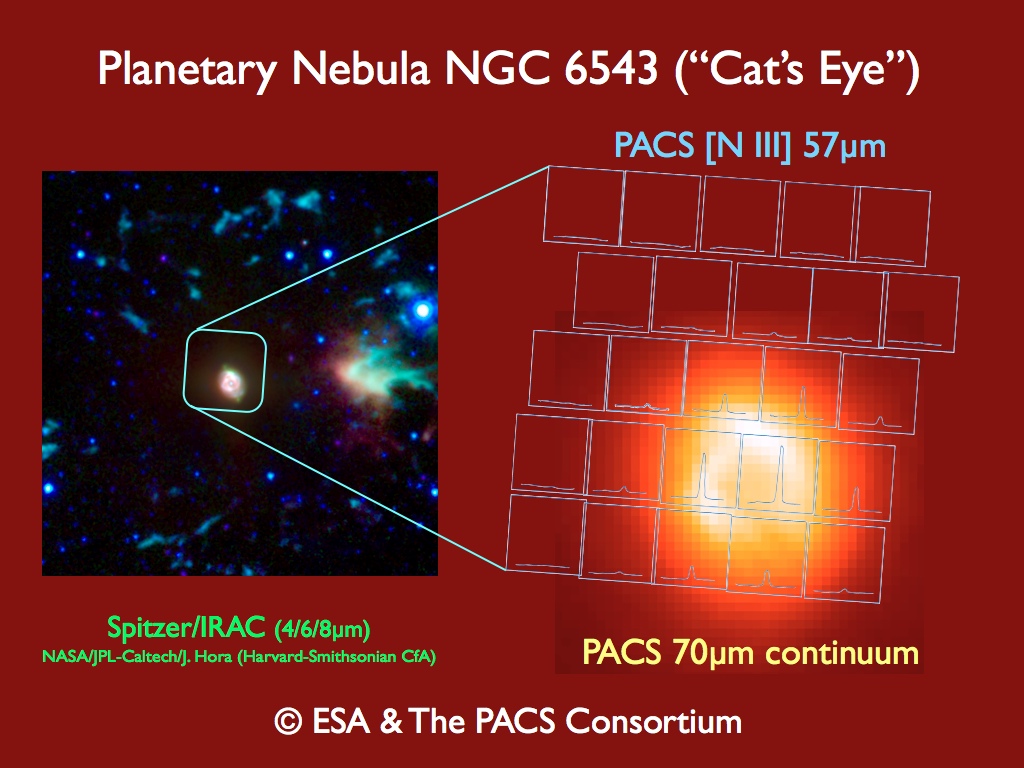 The picture above shows a Spitzer/IRAC near-infrared image of the entire nebula (left) for orientation, and individual spectra of the far-infrared nitrogen line, all taken simultaneously with the PACS spectrometer in the inner region of the nebula. The spectra are overlayed on the dust continuum as observed with the PACS photometer. 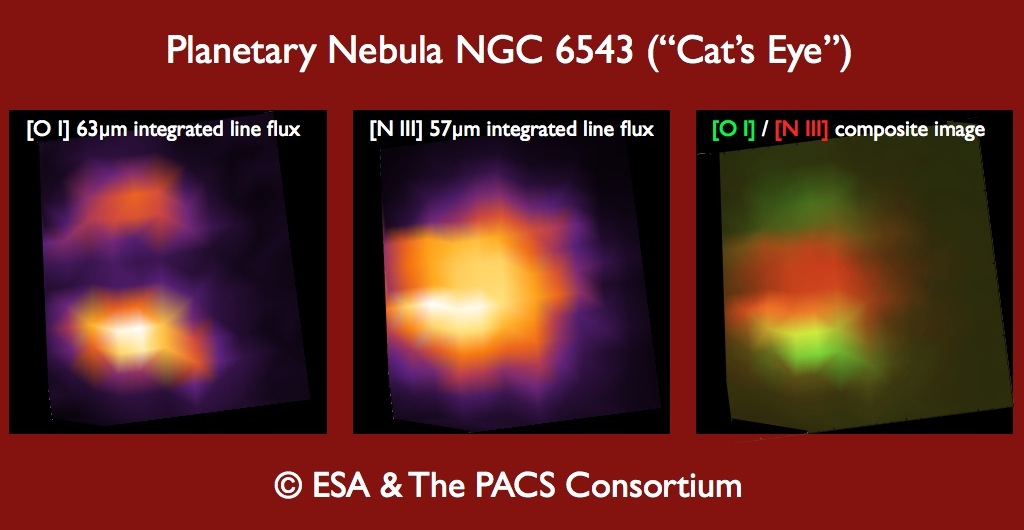 The second picture shows a comparison of the two observed lines. The images have been reconstructed from a mosaic of 9 overlapping 'snapshots' of the kind shown in the previous panel. The two lines clearly originate from different components within the object - where the ionised nitrogen emission is brightest, there is a 'hole' in the neutral oxygen. This is most clearly seen in the composite image, with the oxygen line shown in green and the nitrogen line shown in red.

Already, these very first data fulfill the expectations at this point and are of unprecedented sensitivity, accurately tracing the physical conditions in cold and warmer gas. Being a first test, while these spectra are excellent on a qualitative level, the super-position of the individual spectra on the continuum image still needs to be verified, and the line intensities are non-quantitative. This is work to come!

Herschel as an observatory

The very first test observations have generated spectacular data as shown in the 'sneak preview' and 'first light' releases! That this has been possible on very short timescales is a testament to the overall vision of how the Herschel mission and science operations were planned to work, and of all the ground testing and preparations, including very extensive operations simulations, that have been performed leading up to the in-flight operations.

What has been achieved so far - remember this is but the very beginning! - is very encouraging for the future, both with respect to the performance of the 'space segment' - the Herschel satellite - and the 'ground segment' which involves the ESA Herschel mission operations and science centres (MOC and HSC), in partnership with the instrument control centres (ICCs) provided by the PI consortia, and the NASA Herschel Science Center (NHSC).

The Herschel observations were carried out as part of the commissioning of the observatory. The scientific rights of some of these observations are owned by Key Programme consortia: the SPIRE photometry of M66 and M74 by the 'KINGFISH' consortium lead by R. Kennicutt, and the PACS photometry of NGC6543 by the 'MESS' consortium lead by M. Groenewegen.