The aim of this project is the monitoring of a special type of X-ray binaries, also known as microquasars, at radio wavelengths. An X-ray binary consists of a compact object (black hole or neutron star) and a "normal" star, swallowed by the compact object. Some of these systems show radio bursts and their study can give us information about the black hole/neutron star, accretion rate, etc. Students will perform observations of a few selected microquasars to obtain a long-term data set of their radio fluxes, searching for flares. Students will then participate in a "Radio Burst Patrol", rendering the scientific community a valuable service.

Binary star systems contain two stars that orbit around their common center of mass. A special class of binary stars is the X-ray binaries, so-called because they emit X-rays. The brightest X-ray sources in our galaxy are X-ray binaries. X-ray binaries are made up of a normal star and a collapsed star (a white dwarf, neutron star, or black hole). These systems produce X-rays if the stars are close enough together that material is pulled off the normal star by the gravity of the dense, compact star. Material is drawn from the normal star and spirals in via an accretion disk onto the compact companion. Intense X-ray emission is released from the inner region of the accretion disk where it falls onto the collapsed star. The X-rays come from the area around the compact companion where the infalling material is heated to very high temperatures (over a million degrees!).

X-ray binaries are further subdivided into several and sometimes overlapping subclasses, that perhaps reflect the underlying physics better. Note that the classification by mass (high, intermediate, low) refers to the optically visible donor, not to the compact X-ray emitting accretor. 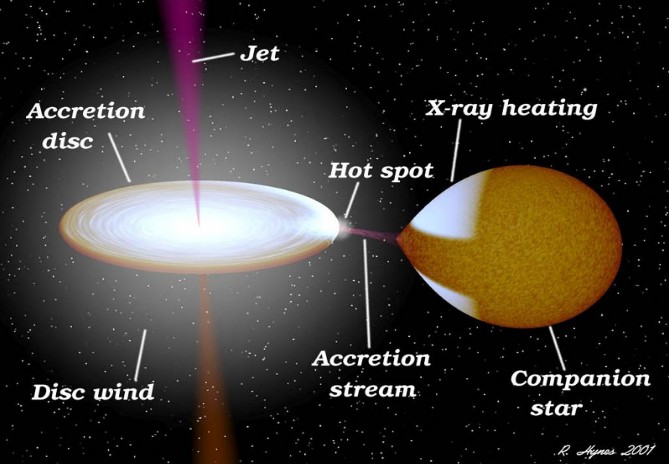 A microquasar (or radio emitting X-ray binary) is a smaller version of a quasar. Microquasars are named after quasars, as they have some common characteristics: strong and variable radio emission, often resolvable as a pair of radio jets, and an accretion disk surrounding a compact object which is either a black hole or a neutron star. In quasars, the black hole is supermassive (millions of solar masses); in microquasars, the mass of the compact object is only a few solar masses. In microquasars, the accreted mass comes from a normal star, and the accretion disk is very luminous in the optical and X-ray regions. Microquasars are sometimes called radio-jet X-ray binaries to distinguish them from other X-ray binaries. A part of the radio emission comes from relativistic jets, often showing apparent superluminal motion.

Noteworthy microquasars include SS433, in which atomic emission lines are visible from both jets; GRS1915+105, with an especially high jet velocity; the very bright Cygnus X-1; and the microquasar candidate LSI+61303, which has been discovered to emit VHE (Very High Energy) gamma rays.