Supernovae Detection in Nearby Galaxies

The telescope is going to systematically monitor several hundreds of spiral galaxies that lie less than 300 million light years from our Milky Way, in hopes of capturing the rise in light from a supernova outburst. Supernovae of type-Ia are very important astrophysical objects because of their use as absolute distance indicators.

Type Ia supernovae are thought to be interacting binary star systems in which a white dwarf star is obtaining mass via an accretion disk from the star companion. As the white dwarf accretes more and more matter and goes over the Chandrasaekar limit (1.4 solar masses), a thermonuclear explosion results. Since this critical limit of 1.4 solar masses consistently sets the amount of material in the blast, these types of supernovae are more useful as standard candles than other types. Early detection of supernovae explosions is important to get vital spectroscopic information for type classification while the system is still bright and spectroscopy still possible.

Is also important the observation of the outburst maximum light, which gives information about its distance. Assuming the luminosity can be established for the type Ia supernovae, its absolute magnitude is then known. Observation of its apparent magnitude yields the distance to it and the galaxy in which it resides by the so-called distance modulus, m - M = 5 log d - 5, where m and M are the apparent and absolute magnitudes, and d is the distance in parsecs to the supernova and host galaxy.

Supernovae are bright enough to be observed at cosmologically important distances, thereby increasing their significance in the search for those parameters governing the expansion rate of the universe (i.e. Hubble constant).

Earliest possible observations are desired as the supernova fades from maximum light during the weeks after the outburst. Early detection of supernovae candidates requires systematical vigilance. The appearance of a supernova in any one galaxy is an extremely rare occurrence, but by monitoring many galaxies, the likelihood of discovery increases.

The first phase involved imaging of a few hundred galaxies in order to use these star fields as templates. The images of the galaxy and surrounding star field must be transformed into transparent overlays to be used on site at the telescope. Later, an image of a candidate galaxy is taken and upon CCD readout, the overlay is placed on top of the computer screen to check for any "new" stars in or near the galaxy that are not in the template. In this way, rapid identification can take place without the need for exhaustive photometry and data analysis, or relying on memorization of many star fields. Every successful confirmation is usually followed up quite rapidly with spectroscopic identification from professionals at major observatories.

There are more than enough galaxies accessible by the telescope to ensure some degree of success. 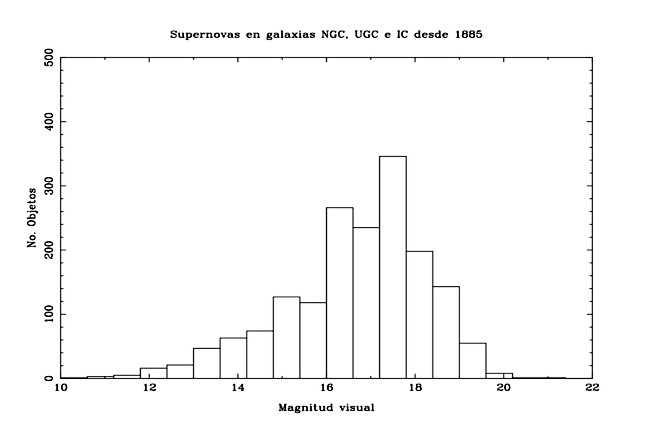 Distribution of Supernovae in nearby galaxies since 1885. Number of objects is plotted versus visual magnitude.