The Milky Way unveiled as we have never seen it before

Herschel has recently achieved another major milestone in the currently ongoing performance verification phase. Building on the already demonstrated photometric capabilities of the PACS and SPIRE science instruments employed in the 'sneak preview' and 'first-light' observations, for the first time Herschel has now observed in the 'SPIRE/PACS parallel mode'.

One outcome is spectacular views in five different far infrared colours of an area near the galactic plane about 60 degrees away from the direction towards the centre of the Galaxy in the constellation of the Southern Cross, considered a suitable region for demonstration and verification purposes, being representative in having a range in structure sizes and temperatures. The area imaged is about 2x2 degrees on the sky, and a total of just over six hours was used to perform the observation. The resulting data unveil a part of the Milky Way galaxy in spectacularly detailed images as we have never seen it before! 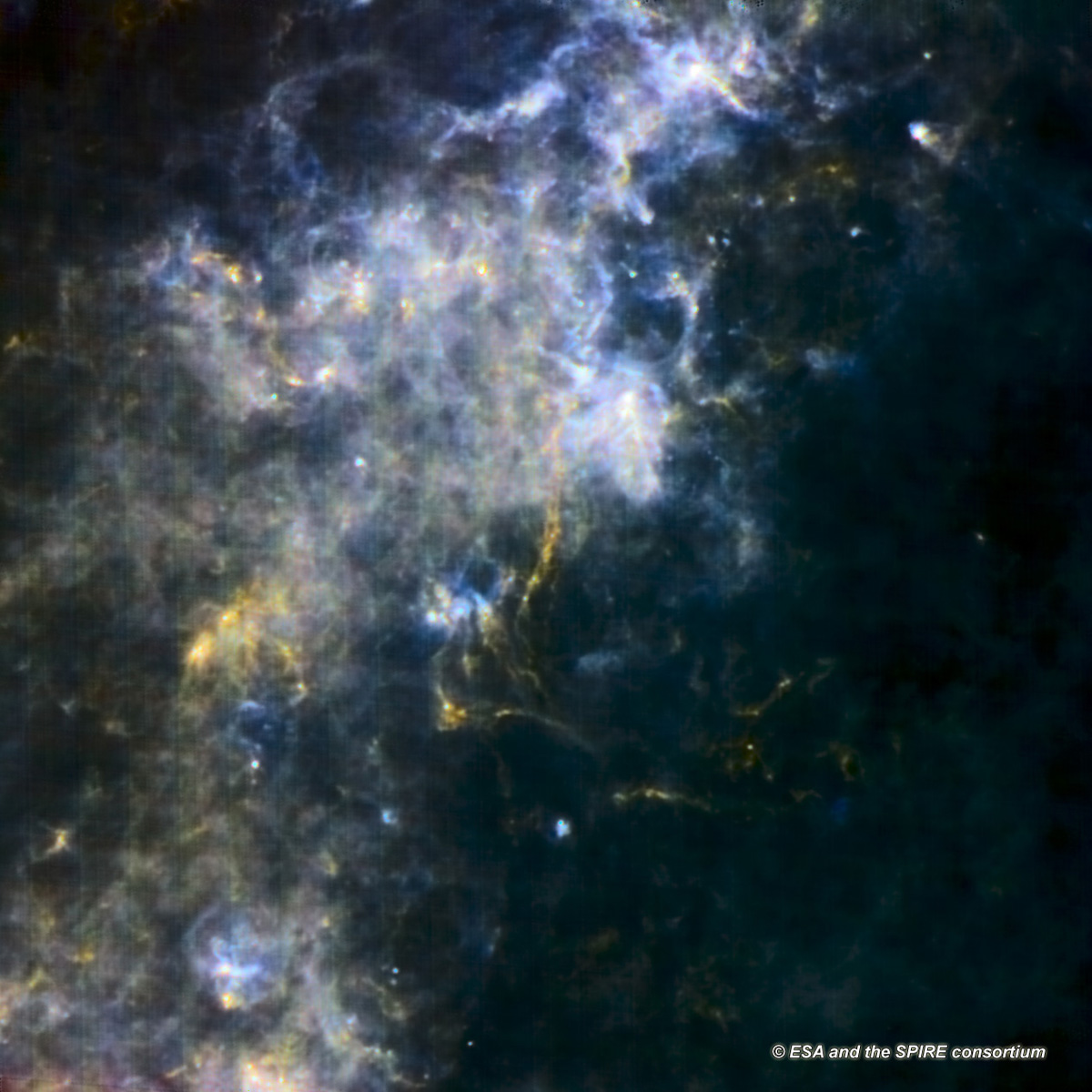 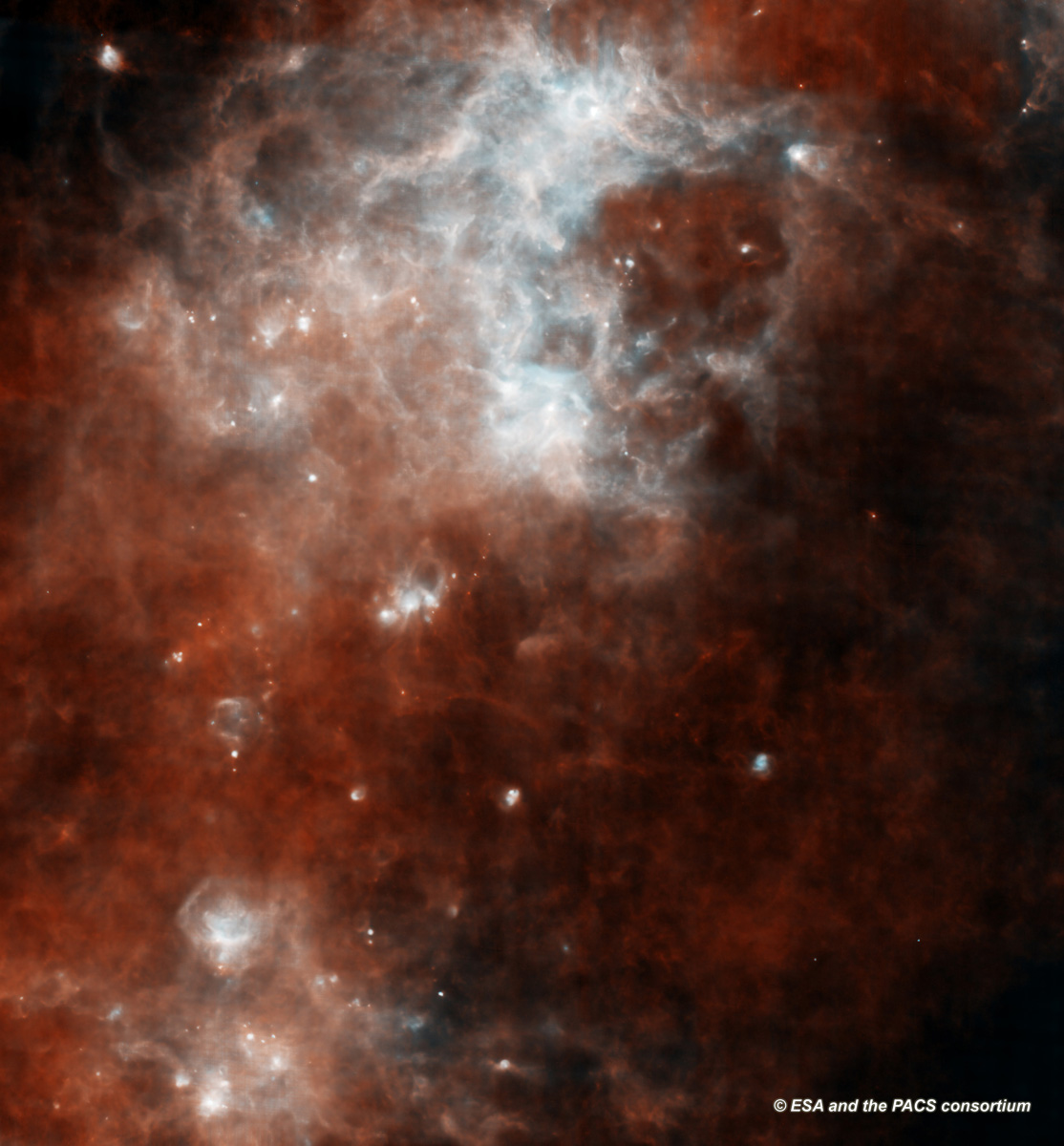 The SPIRE (left) and PACS (right) images were constructed by colour-coding the different observing wavelengths, and creating composite false-colour images. In the SPIRE image blue denotes 250 µm, green 350 µm, and red 500 µm emission, while in the PACS image cyan denotes 70 µm and red 160 µm emission. The resulting images not only reveal cold material in the Galaxy, but are providing astronomers with a wealth of information about it - such as how much material there is, its mass, temperature and composition, and whether or not some of it is collapsing to form new stars. An extremely rich reservoir of cold material in the galactic plane is seen to be in a previously unsuspected state of turmoil. The interstellar material is condensing in a continuous and interconnected maze of filaments and strings of newly forming stars in all stages of development, unveiling a tireless Galaxy constantly forging new generations of stars. 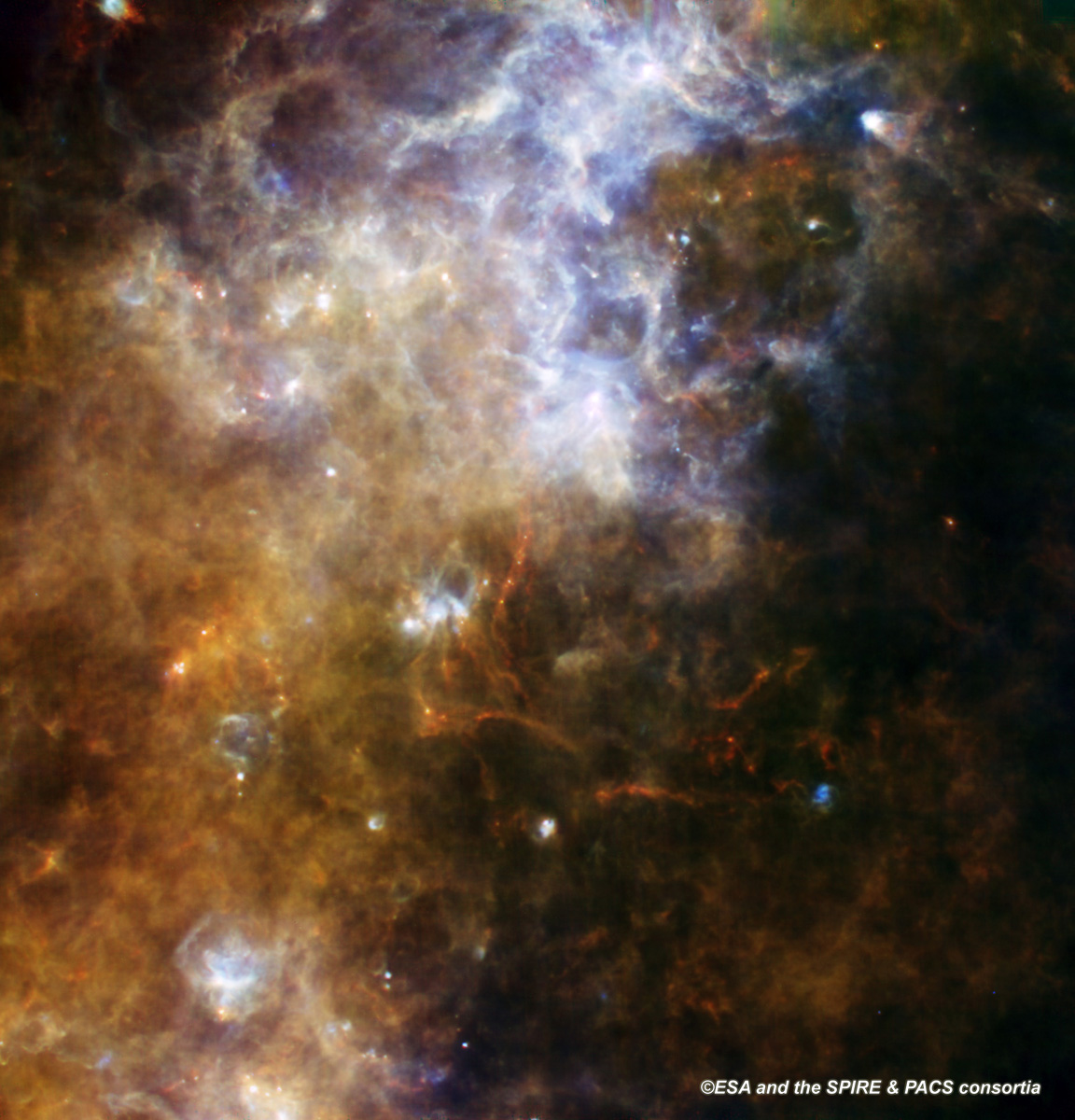 In the image above the SPIRE and PACS images have been combined to a single composite; here blue denotes 70 µm and green 160 µm emission, while red is the combination of the emission from all three SPIRE bands at 250/350/500 µm. What is striking in the image is how impressive the colour-coding allows us to differentiate material that is extremely cold (red) from that which is warmer. Material as cold as less than 10 K to few times that have most of their emission in the Herschel bands. Since stars form in such cold, dense environments, the composite image easily locates the star-forming filaments that would be very difficult to isolate from a map made at a single far-infrared or submillimetre wavelength. This is especially important in a very crowded field like this, which is likely to include many molecular clouds along the line of sight. The image contains an incredible network of filamentary structures with surprising features indicative of a chain of near-simultaneous star-formation events, glittering rather like beads of water on a string in the sunlight.

The 'SPIRE/PACS parallel mode' is one of Herschel's most powerful and effective observing modes, with the SPIRE and PACS cameras working together while the telescope scans across the sky (in this case at a rate of 60" per second). Using SPIRE and PACS together this way produces five images simultaneously in different wavelengths, making the best possible use of the superfluid helium cryogen that ultimately defines the lifetime of the Herschel mission. Since the fields-of-view of the two instruments are almost 20 arcmin offset from each other on the sky, this mode is particularly useful for imaging large areas in survey type observing programmes.

A number of Herschel Key Programmes will be carried out in this manner. Not only will large areas of the Milky Way be surveyed systematically, exploring astronomical 'terra incognita' and helping astronomers to unravel the mysteries of star formation in a way that has never been previously possible, but it is also planned to use this mode for observations of 'blank fields' for extragalactic astronomy which will aid us in understanding the history of star formation throughout cosmic history.

Göran Pilbratt (Herschel Project Scientist) based on inputs provided by the Herschel Principal Investigators Matt Griffin (SPIRE) and Albrecht Poglitsch (PACS), and members of their consortia.

The first Herschel 'SPIRE/PACS parallel mode' observations were carried out as part of the performance verification phase of the observatory on two consecutive days on 1-3 September 2009 (OD#111-112). The observing capability was successfully demonstrated, the particular observations reported on here were performed on 3 September 2009 (OD#112) and lasted just over six hours.

The approved Herschel Key Programme Hi-GAL, will observe one third of the entire galactic plane (from -60 to +60 degrees galactic longitude) in a similar fashion.