12 December 2001 The proceedings ESA SP-459 of the 4th INTEGRAL workshop ("Exploring the gamma-ray universe") have been published. More information can be found here.

18 November 2001 The flight model of the IBIS imager detector unit has been delivered to ESA on 18 November 2001. Integration into the spacecraft has been performed subsequently. More details can be found here.

23 August 2001 The AO-1 General Observer Programme, as approved by ESA can be found here.
An overview of the complete observing programme including the Core Programme (guaranteed time) observations is provided here.

INTEGRAL Flight Model: payload and service module have been mated

16 August 2001 The payload module and the service module of the INTEGRAL FM have been mated in ESTEC.
Pictures showing the sequence can be viewed here. 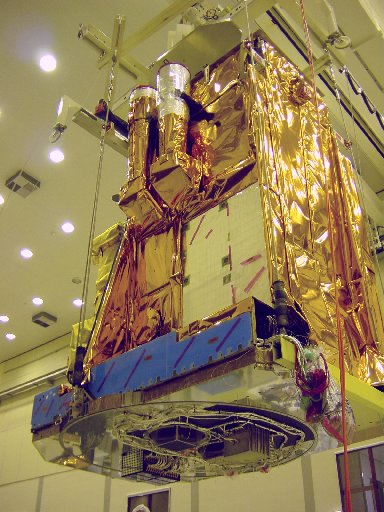 21 July 2001 After being assembled by prime contractor Alenia Spazio, INTEGRAL has now been delivered to ESTEC in the Netherlands.

Environmental and system tests are now to take place on the gamma-ray observatory in view of a launch in October 2002.

More details can be found here.

11 May 2001 The SPI Flight Model has arrived at Alenia (Turin, Italy) and is being mounted on the spacecraft. Pictures can be found here.

08 May 2001 Dr. Miguel Mas-Hesse (INTA/Madrid) has been nominated PI for the OMC instrument. His predecessor, Dr. Alvaro Gimenez stepped down as PI as he is taking up duties as Head of ESA's Space Science Department as of 01 July.

16 February 2001 The deadline for submitting AO-1 open time observing proposals has been reached. Further information can be found in the ISOC Newsletter, #2.