24 November 2014 During a meeting on 19 & 20 November 2014, the Science Programme Committee (SPC) approved the confirmation of science operations until 31 December 2016, as well the indicative extension of science operations for INTEGRAL until 31 December 2018, subject to a mid-term review in 2016. The aim is to reduce the allocated resources for 2017/2018 by approximately 10% as compared to 2016. See the full story on the SPC decision.

This is excellent news for INTEGRAL and the science community. We thank you for your continuing support. 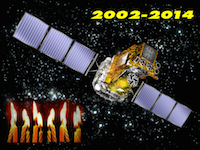 17 October 2014 Twelve years ago, on 17 October 2002 at 6:41 CEST, the INTEGRAL observatory was launched from Baikonur. Today, it still remains in excellent health and continues to observe the gamma-ray and X-ray sky.

27 August 2014 Astronomers using INTEGRAL have demonstrated beyond doubt that dead stars known as white dwarfs can reignite and explode as supernovae. The finding came after the unique signature of gamma rays from the radioactive elements created in these explosions was captured for the first time in SN2014J. See the story in the ESA press release.

14 August 2014 The 10th INTEGRAL Workshop "A Synergistic View of the High Energy Sky" will take place from 15-19 September 2014, in Annapolis, MD, USA. The deadline for the reduced-fee registration has been extended to August 22. The low hotel rate for the reserved block has been extended to August 29. Also, the Workshop program is now available. For more information we refer to the Workshop web page at http://www.clemson.edu/ces/physics-astro/conferences/INTEGRAL/.

Update (19 Aug 2014): Links to the hotel room reservations page which were included in the 2nd and 3rd Circulars were changed by the hotel staff, so if you want to go to their new, dedicated page please use the new connection: NASA - Integral Workshop. Also, we would like to draw your attention to the check-out date. With the old form the nominal check-out was Thursday and not Friday (we adjourn around lunch time on Friday), so an extra booking was likely required. The new link has corrected that, but please check your reservation confirmation sent to you from the hotel, and make sure you have the check-out date correct.

INTEGRAL TOO observations of Mkn 501 in outburst

5 August 2014 Mkn 501 has been active now for several months. It displays very strong flaring activity, which has been detected in soft X-rays by Swift/XRT and in gamma-rays by MAGIC. INTEGRAL will also observe the active source during revolution 1443, when a TOO observation of 200 ksec has been accepted by the INTEGRAL Project Scientist.

1 August 2014 INTEGRAL has revealed a surprising signal of gamma-rays from the surface of material ejected by the supernova explosion in SN2014J. This result challenges the prevailing explosion model for type Ia supernovae, indicating that such energetic events might be ignited from the outside as well - rather than from the exploding dwarf star's centre. The findings are reported in Science Express.

2 July 2014 The INTEGRAL AO-12 General Programme, as recommended by the Time Allocation Committee (TAC) and approved on June 12 by ESA's Director of Science and Robotic Exploration (Prof. Alvaro Giménez), has been released and the observers have been informed.

30 June 2014 Today at 15:00 all of our web pages were migrated to the new ESA web standard COSMOS. Some updates to the contents of the INTEGRAL pages have been made, most remain are as they were, and the appearance has been modernised and simplified. Warm thanks to the team that has made this possible, and to our web master, Cristina Hernandez, for her work in implementing the migration. Comments you may have are welcome: inthelp@sciops.esa.int

27 May 2014 A new set of INTEGRAL observations on the Type Ia SN2014J in M82 have been initiated, which will start tonight, in order to follow the very late decline of the SN. Again, for the benefit of the community, all data are made public immediately. The observations are expected to last for about a month.

7 May 2014 INTEGRAL entered Emergency Sun Acquisition Mode (ESAM) on 6 May at 13:51Z due to an unlucky chain of events. There is no indication that the ESAM entry was due to an on-board failure. Recovery operations are ongoing smoothly and expected to finish on mid-day of 8 May.

Update (8 May 2014): All instruments have been successfully activated. The planned observation sequence was rejoined at 11:08Z with IBIS, SPI and OMC active. JEM-X activation was completed at 13:59Z.

11 April 2014 The deadline for the submission of proposals for AO-12 open time observations was on 4 April 2014, and all proposals are in the ISOC database. Below are some preliminary statistics on the proposals that have been received.

Total number of proposals
The total number of proposals received is 77. The total observing time requested is about 107 Msec (for all types of observation, i.e., fixed time, normal time, and ToO). Here, 10% of the requested total ToO time has been taken into account. Given that up to about 22 Msec of observing time (for new observing proposals) will be available for the AO-12 observing programme (12 months duration starting on 1 January 2015), this corresponds to an oversubscription in time by a factor of 4.8.

At the end of May, the Time Allocation Committee will peer review all proposals and recommend the AO-12 observing programme to ESA.

21 March 2014 The deadline for AO-12 observing proposals is approaching. We encourage previous second round data rights proposers to submit for AO-12 regular observing proposals for their favourite targets (or science) since amalgamation will be made more flexible. In order to help creating sensible observing proposals for astronomers interested in groups of similar targets, we have created a tool that for a list of target positions will propose a grouping of these targets into a smaller number of observations, such that all targets are covered. For details on this tool, its installation and use, please see the SGT page.

3 March 2014The INTEGRAL operations were affected by a strong X-class solar flare, which forced the OMC to be put in safe mode around UT 11:00 on 25th February, and later JEM-X around UT 10:00 on 28th February. OMC and JEM-X science operations resumed at the beginning of the subsequent revolution (1390), around UT 05:00 on March 2. SPI and IBIS were operating nominally during that period, but their data may be affected by a high particle background.

More information can be found in the latest Long-Term Plan.

24 February 2014 Today, the Director of Science and Robotic Exploration (Prof. Alvaro GimÃÂ©nez) has released the 12th Announcement of Opportunity for observing proposals with INTEGRAL.

This announcement solicits proposals for observations to be carried out from January 2015 for a period of 12 months. Proposers from all over the world are welcome to participate. All proposals will be subject to an independent peer review by the INTEGRAL Time Allocation Committee (TAC). The deadline for proposal submission is Friday 4 April 2014, 14:00 CEST.

We would like you to be aware that ESA has implemented the following important changes to AO-12:

More information can be found on the AO-12 page.

4 February 2014 After a public observation in Revolution 1380 under program 1170001, INTEGRAL is now doing observations up to Revolution 1386 under an approved ToO program (PI: Isern), proposal 1140011 (see our short-term scheduling information). The NRT data will not be public. However, for the benefit of the community, the PI has agreed to make the processed data (i.e., CONS data) immediately available to the public at large. The CONS data are typically available about a month after the observations have been done.

INTEGRAL Target of Opportunity observations on SN2014J in M82 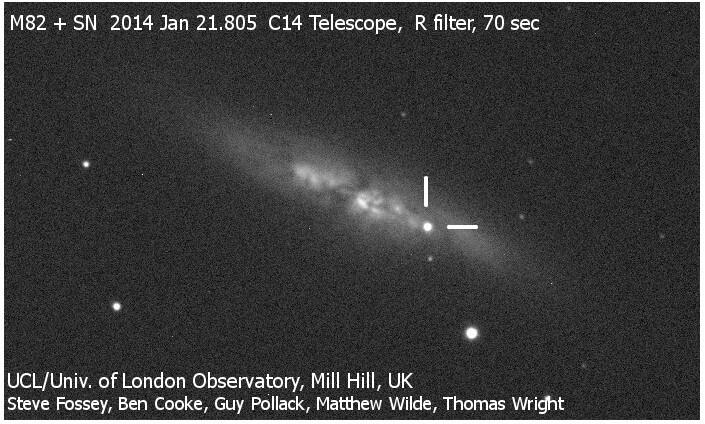 This SN event is very unique and INTEGRAL is the only observatory currently capable of doing high-resolution gamma-ray spectroscopy. Therefore, INTEGRAL will observe this SN almost exclusively for the next months. These observations will hopefully constitute a reference in SNIa science, and thus an important scientific legacy for years to come.

Part of total observing time on SN2014J will be composed of 2 Ms of a TAC-approved ToO (PI: Isern). An additional, comparable, amount of observing time will be made available to maximise the scientific returns. The important change in our planning due to this exceptional event implies that various previously foreseen programmes will not be carried out. ISOC will do everything it can to minimise the consequences this will have on the accepted programme.

The first INTEGRAL observation will be done in Revolution 1380, which starts already on UT January 31 07:08. The data obtained during this Revolution will be made publicly available. Further ToO observations will be planned and the observing strategy depend on the evolution of this SN. An announcement has been made in ATel #5835.

Note that the observations in Revolution 1380-1382 are done with the nominal 5x5 dither pattern with the pointing centre offset by 2 degrees, to avoid the Solar Aspect Angle observing constraint.

9 January 2014 ISOC wishes you a healthy and fruitful scientific 2014. The AO-11 cycle of observations started on January 1st and will last 12 months. The INTEGRAL target lists and sky maps are available, as well as the AO-11 Long-Term Plan.

ISOC is preparing the next call for proposals requesting INTEGRAL observing time. The AO-12 release will be on 24 February 2014, with a deadline on 4 April 2014. The AO-12 cycle of observations will begin on 1 January 2015 and has a duration of 12 months.

As part of the cost savings implemented last year, we remind you that ESA will revert from this year to a single, annual AO for observing proposals. This means that there will be no 2nd call for data rights proposals anymore. ISOC encourages previous 2nd round data rights proposers to submit for AO-12 regular observing proposals for their favorite targets (or science); amalgamation will be made more flexible (i.e., with less restrictions).

New for this AO-12 call is the opportunity to propose for coordinated observations with NASA's Swift satellite, in addition to the already existing programme with XMM-Newton. More details will be released in the upcoming AO documentation.

7 January 2014 Recent Solar activity is affecting the operations of INTEGRAL again, forcing IBIS, JEM-X and OMC to safe mode around UT 08:30 on 6 January. IBIS could be reactivated already at 14:33 the same day. Both JEM-X could be activated normally at the start of revolution 1372 (7 January), but OMC remains in safe mode due to spikes in the measured particle rates.

Update (8 January 2014): High radiation affects INTEGRAL since UT 7 January 20:11 again. The ongoing solar flare is due to one of the largest sunspots (AR1944) in years. OMC, JEM-X and IBIS were put again in safe configuration. Since about 8 January 08:00, the radiation levels are decreasing slowly. It is assumed, that IBIS, JEM-X and OMC will be in safe configuration until the end of the ongoing revolution (1372). The SPI/ACS high voltage was switched off at 15:30. Note that the SPI annealing is unaffected.

Update (13 January 2014): Both JEM-X were activated at the start of Revolution 1373 on January 10 at UT 08:33. The SPI ACS high voltage was switched on later that day at UT 16:22, but still with the minimum high voltage applied due to ongoing SPI annealing. The OMC activation was performed on January 11 at UT 00:55 when the radiation levels had dropped below the threshold. Operations are continuing nominally.