3 December 2012 The AO-10 INTEGRAL Long Term Plan (LTP), providing the best long-term information currently available for the coming cycle of AO-10 observations (January 1 to December 31, 2013)  has been published on the ISOC website. When scheduling, ISOC intends to follow the LTP as closely as possible. We advise observers to check the LTP regularly.

From rare breeds of high-energy stars to the feeding habits of monster black holes and the annihilation of antimatter, the mission has been uncovering the secrets of the most energetic phenomena in the Universe.

We wish all the best to INTEGRAL for the years to come.

We take this opportunity to thank you all for your continued support and interest in the mission.

1 October 2012 During the call for Data Right Proposals (deadline 28 September 2012) the ISOC system received 38 valid proposals, requesting data rights to 123 fields and for 453 targets in total (every data right proposal can request observational data from multiple fields, defined in observing proposals, and multiple sources in each field). The large majority of requests was for Galactic Astronomy.

The Time Allocation Committee will decide on the proposals by mid November 2012. 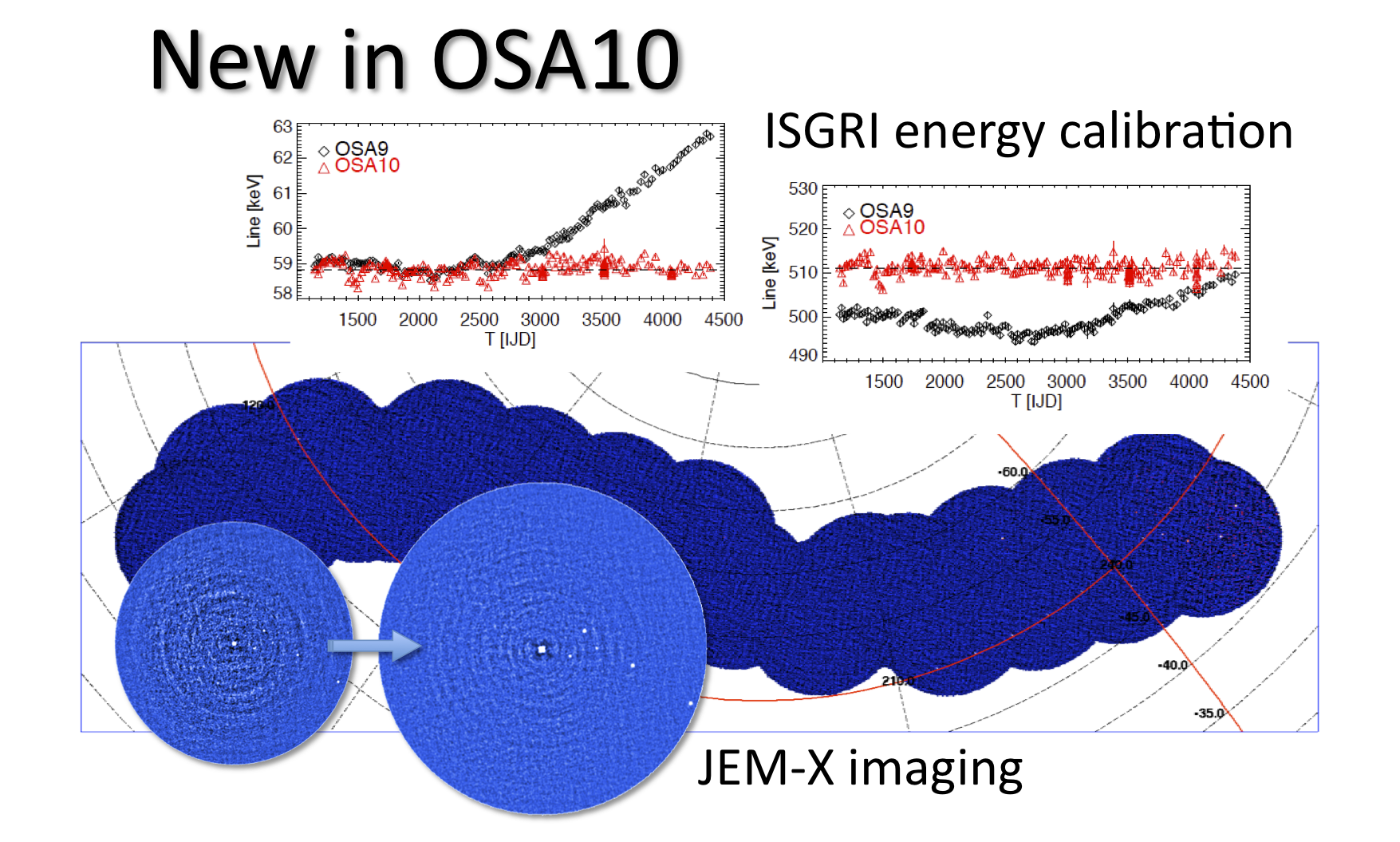 24 September 2012 A new version of the INTEGRAL Off-line Scientific Analysis (OSA) has been released by the ISDC. Among the improvements of OSA version 10.0 are a better IBIS/ISGRI energy calibration and new features for the JEM-X imaging. The analysis package can be download from the ISDC download page, with the corresponding documentation.

3 September 2012 Today, the Director of Science and Robotic Exploration (Prof. Alvaro Giménez-Cañete) has released the 10th Announcement of Opportunity for data right proposals with INTEGRAL.

This announcement solicits proposals for obtaining data rights to targets within AO-10 observations to be carried out from January 2013 onwards. Proposers from all over the world are welcome to participate. All proposals will be subject to an independent peer review by the INTEGRAL Time Allocation Committee (TAC). The deadline for proposals submission is Friday 28 September 2012, 14:00 CEST (12:00 GMT).

More information can be found on the AO-10 Data Right Proposals page.

17 August 2012 After INTEGRAL entered ESAM yesterday, it has been recovered at 10:55 (UT). INTEGRAL is now in a nominal status and is again executing the scientific timeline.

16 August 2012 INTEGRAL entered Emergency Sun Acquisition Mode (ESAM) today at 08:52. The root cause is well understood and there are no indications of a permanent failure on-board. The spacecraft will be left in ESAM until after perigee when recovery operations will commence.

GRB 120711A: A long and bright GRB detected by INTEGRAL 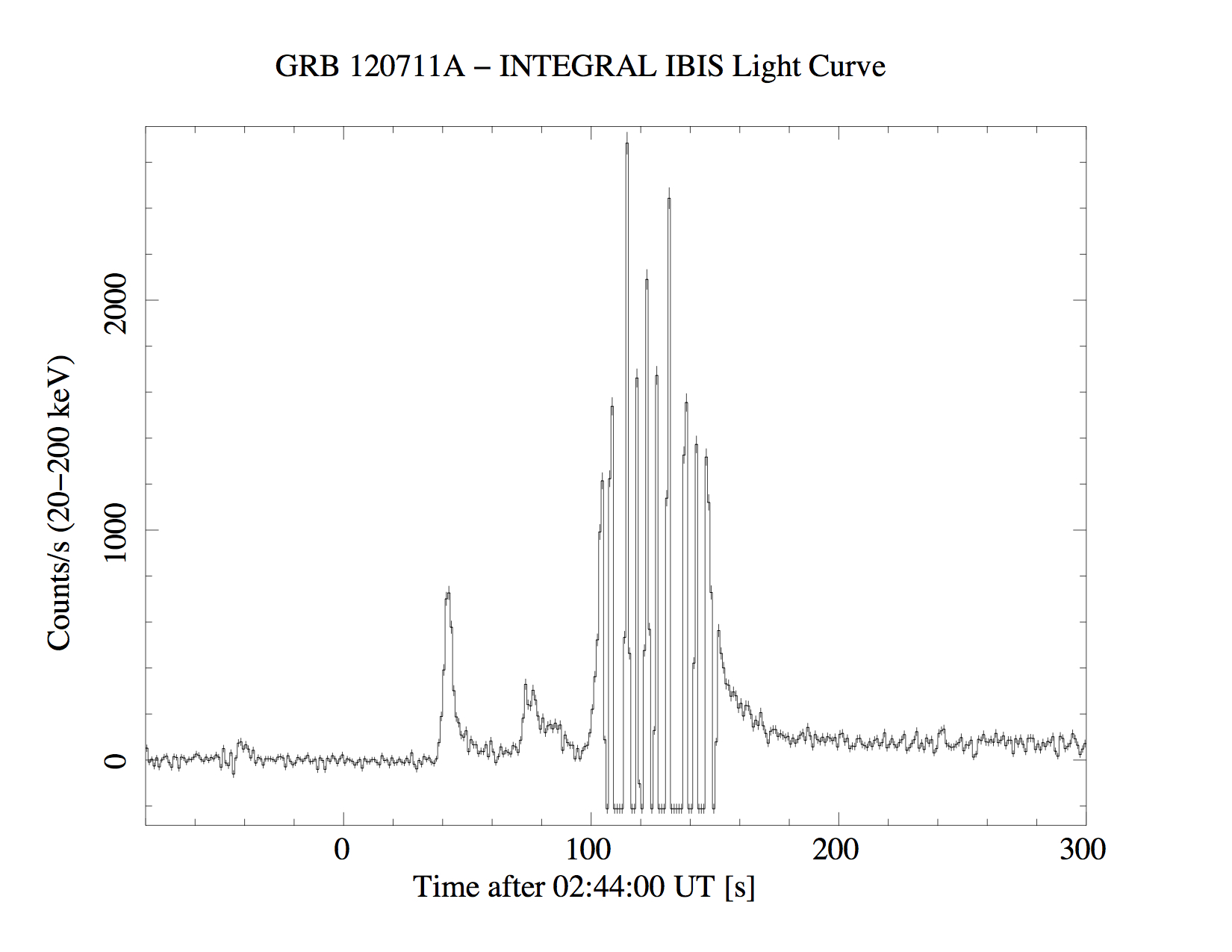 An optical transient source was detected shortly after the trigger; the source rapidly brightened, peaking at roughly 112s after the trigger (GCN #13430). Thereafter, the optical decayed, as usual for GRB afterglows (GCN #13432). The most likely redshift of the GRB is z=1.405 (GCN #13441).

26 June 2012 A new INTEGRAL Galactic plane survey by R. Krivonos and colleagues (see paper and web site ) has been added to the SkyView Virtual Observatory facility. This survey combines 9 years of INTEGRAL IBIS observations from December 2002 through January 2011 with a total of 135 megaseconds of exposure. Data is generated for the Galactic plane in the region |b| <= 17.5. The survey is sensitive to about 1 millicrab in the hard X-ray range from 17-80 keV.

26 June 2012 An additional leap second will be introduced at the end of June 2012 (see IERS Bulletin). The INTEGRAL Off-line Scientific Analysis (OSA) software is designed to account for the leap seconds provided that the latest available file is in the directory: "aux/adp/ref/leap".

If your INTEGRAL analysis requires absolute timing on the timescale of a second, you should update the content of your local repository with the new files contained in the ISDC archive by using, e.g., a command like the following:
rsync -lrtv isdcarc.unige.ch::arc/rev_3/aux/adp/ref your_destination/aux/adp/ref

22 June 2012 The INTEGRAL AO-10 General Programme , as recommended by the Time Allocation Committee (TAC) and approved on the 12th of June by the ESA Director of Science and Robotic Exploration (Prof. Alvaro Giménez), has been released and the observers have been informed.

Observations interrupted by ESAM and recovered

8 June 2012 On 7 June at 4:50UT a "Single Event Upset" of the Reaction Wheel Drive Electronics and subsequent unplanned movement of the spaceraft triggered the Emergency Sun Acquisition Mode (ESAM) – setting the instruments into safe mode and orienting the spacecraft to have the sun at 90 degrees to the solar panels. Within 8 minutes of the ESAM trigger the satellite was in a safely controlled attitude. Recovery started as soon as possible and took until the early hours of 8 June to complete. This is only the third such event since launch, previous ESAM events were in January 2005 and June 2007. Congratulations to the team at the Mission Operations Centre for the prompt recovery of the satellite and further observations.

18 May 2012 INTEGRAL was affected by a moderate solar flare, but accompanied by strong proton radiation, starting on 01:49Z on 17 May 2012 in revolution 1171. Soon after, JEM-X, OMC and IBIS deactivated autonomously due to the high radiation and remained inactive for 31.2, 30.8 and 5.4 hours, respectively. The SPI ACS high voltage had to be switched off for an hour, otherwise the instrument continued working normally. Nominal operations of all four instruments were resumed at 13:54Z on 18 May.

8 May 2012 INTEGRAL will conduct a new series of public Earth/Cosmic X-ray Background (CXB) observations in revolution 1168 (starting on May, 9th). This implies that, for those revolutions (1168, 1169, then 1197 and 1206 in August, 1216 in September and 1234 in November), the possibility to react to a ToO will be severely limited. Earth observations will also be done in AO11. This is a public programme where the Earth will drift through the field of view of the INTEGRAL instruments (see animation here). Results from this observation will help in separating the cosmic and instrumental backgrounds, and so ultimately lead to improved background subtraction. Scientifically, the main goals are to measure the spectral shape of the CXB emission above 20 keV and to study any high-energy emission from the Earth during storms in auroral regions.

25 April 2012 The deadline for the submission of proposals for AO-10 open time observations was on  20 April 2012, and all proposals are in the ISOC database. Below are some preliminary statistics on the proposals that have been received.

Total number of proposals
The total number of proposals received is 59. The total observing time requested is about 65 Msec (for all types of observation, i.e. fixed time, normal time, and ToO). Here, 10% of the requested total ToO time has been taken into account. Given that up to about 20 Msec of observing time (for new observing proposals) will be available for the AO-10 observing programme (12 months duration starting on 1 January 2013), this corresponds to an oversubscription in time by a factor of 3.3. This is again a high value,  showing the continued high interest of the scientific community in the INTEGRAL mission.

The Time Allocation Committee, will peer review early June all proposals and will recommend the AO-10 observing programme to ESA.

A second Call within this AO-10 will be released on 3 September, inviting proposals on individual point sources or selected sky areas (for diffuse emission studies) to be associated as "data-right proposals" with the selected observations, excluding ToO observations. The deadline for submission of data rights proposal will be 28 September 2012.

18 April 2012 Tomorrow, April 19, INTEGRAL will perform a Target of Opportunity observation on the recently discovered X-ray transient MAXI J1305-704 (ATel #4024), in order to identify the nature of the source. Please consult the scheduling pages  for more information.

15 March 2012  On 15-22 March 2012 INTEGRAL will participate in a large-scale multi-wavelength campaign on the Galactic center with major international astronomical facilities. The Galactic Center is known to have flaring phases caused by material falling onto the black hole. The aim of this campaign is to measure the behavior of the emission near the black hole during these flares by performing observations simultaneous with VLBA in the radio, the European Southern Observatory's VLT in the optical, and ESA's XMM-Newton and NASA's Chandra satellites in the X-rays. INTEGRAL will supplement the campaign with data in the soft gamma-rays, in order to study the emission of the most energetic photons expected to come from such events.

12 March 2012  Today, the Director of Science and Robotic Exploration (Prof. Alvaro Giménez) has released the 10th Announcement of Opportunity for observing proposals with INTEGRAL.

This announcement solicits proposals for observations to be carried out from January 2013 for a period of 12 months. Proposers from all over the world are welcome to participate. All proposals will be subject to an independent peer review by the INTEGRAL Time Allocation Committee (TAC). The deadline for Proposals submission is Friday 20 April 2012, 14:00 CEST.

Observing proposals selected for AO-10 will subsequently be open for so-called "data right proposals" via a second Call for Proposals. These associated proposals allow the possibility to obtain data rights on point-like, extended sources or emission features contained in the field of view of accepted observing proposals.

More information can be found on the AO-10 page.

07 March 2012  Following the latest Solar flare, this morning near 00:28, IBIS, JEM-X1/2 and OMC went all into safe mode from about 04:00, after the coronal mass ejected entered the Earth's environment. So far, SPI remains operational.

Update: After 09:00 (UT) SPI started to be affected as well, and the instrument has been put in safe mode as well around 12:00 (UT). Since the radiation level is still increasing, it is unlikely that the instruments return to nominal operations during the current revolution, 1147.

Update: At the start of revolution 1148 radiation levels were still very high, instrument operations will only be resumed when the background has reduced to a safe level.

Final Update: Activation of the two monitors was completed about 6 hours later, at 19:42 for OMC and 20:36 for JEM-X. The IREM counts are now only slightly higher than their nominal values.

01 February 2012 Since yesterday, 31 January at UT 18:04 all instruments have been reactivated and operations continue normally.

30 January 2012 Following a further solar flare on Friday 27 January evening INTEGRAL operations have again been effected. The IBIS, JEM-X and OMC instruments were in safe mode from about UT 19:00 for the rest of revolution 1134. Following perigee yesterday, 29 January, the background levels had decreased sufficiently to allow IBIS to be reactivated again. SPI was unaffected by the flare and could continue to operate nominally.

Strongest solar storm since May 2005

24 January 2012 The IBIS, JEM-X and OMC instruments are in safe mode due to excessively high radiation conditions following a M8.7 class solar flare that occurred during the perigee passage between revolution 1132 and 1133, on Sunday January 22 at around 5:00 CET. SPI is operational and the star tracker seems to be functioning nominally. As soon as the radiation level drops sufficiently, the instruments will be re-activated. This is likely be at the end of 1133 or at the start of 1134. Further reading about the eruption: http://www.space.com/14319-huge-solar-eruption-sparks-radiation-storm.html.

17 January 2012 Today, INTEGRAL began a series of Target of Opportunity observations on the Be-/X-ray binary GX 304-1, which was caught in a new recurrent outburst by MAXI (ATel #3856). The source will be closely followed over the next revolutions. Please consult the scheduling pages  for more information.

16 January 2012 ISOC is preparing the next call for proposals requesting INTEGRAL observing time. The AO-10 release will be on 12 March 2012, deadline 20 April 2012. The subsequent call for proposals requesting data rights will be released September 2012. The AO-10 cycle of observations will begin on 01 January 2013 and has a duration of 12 months.

Planning constraints in revolutions 1132 and 1133

16 January 2012 On 23 January 2012 INTEGRAL will have a lunar eclipse about 3 hours after the earth eclipse. Planning the combination of manual and automatic and on-board autonomous operations for this eclipse is rather difficult and therefore re-planning of revolutions 1132 and 1133 is very difficult.