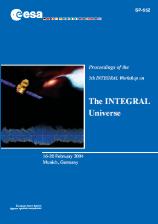 Proceedings of the 5th INTEGRAL workshop "The INTEGRAL Universe"

02 December 2004 The proceedings of the 5th INTEGRAL workshop entitled "The INTEGRAL Universe", held at the Bavarian Academy of Sciences, Munich, Germany are cur rently distributed to the workshop participants.

These proceedings (934 pages + CD-ROM) can be also ordered from the ESA Publications Bookshop (Price: 70 Euros).

05 December 2004 The deadline (29 October 2004, 15:00 CEST) for submission of INTEGRAL proposals for AO-3 open time observations is now a few days behind us. All proposals are in the ISOC database. Below are some preliminary statistics on the proposals that have been received.

The total number of proposals received was 108. The total observing time requested in all proposals is approximately 111 Msec (for all types of observation, i.e. fixed time, normal time, and TOO). Here, 10% of the requested total TOO time has been taken into account. Given that up to about 27 Msec of observing time are available for the AO-3 observing programme (18 months duration starting on 18 February 2005), this corresponds to an oversubscription by a factor of about 4.1. This is a very high value, showing the continued high interest of the scientific community in the INTEGRAL mission.

Read more in the ISOC Newsletter #13.

01 November 2004 Dr. Roland Diehl (MPE/Garching) has been nominated Co-PI for the SPI instrument. His predecessor, Prof. Dr. Volker Schönfelder (MPE/Garching), one of the pioneers in gamma-ray astronomy, has retired.

Professor Schönfelder started his career in cosmic-ray physics (cosmic-ray neutrons), and worked in the field of gamma-ray astronomy since 1971. He introduced a new kind of instrumentation in observational gamma-ray astronomy as Principal Investigator of one of the four instruments (COMPTEL) on NASA's Compton Gamma-Ray Observatory. Since 1995, he was one of the two Co-Principal Investigators of the Spectrometer (SPI) on INTEGRAL.

Volker is 2nd from the left on the following picture featuring INTEGRAL scientists/cyclists in Baikonur (Kazachstan) in 2002... We wish him a happy retirement! (Photo credit: B. Teegarden/NASA-GSFC)

The AO-3 has been closed.

29 October 2004 Today, at 15:00 CEST, the deadline for submission of observing proposals for AO-3 has been reached. All proposals submitted in response to AO-3 will be evaluated by the Time Allocation Committee early December. The observing programme for AO-3, containing accepted proposals, is scheduled to start on 18 February 2005. Further details will be provided in the November issue of the ISOC newsletter.

22 October 2004 The first INTEGRAL Data Analysis Workshop brought together PhD students as well as experienced researchers all wanting to learn more about INTEGRAL and how best to analyse the data from ESA's gamma-ray observatory. The Workshop was organized by the INTEGRAL Science Data Centre (ISDC) on 5-9 October 2004. It was split into two parts.

The first session consisted of lectures by specialists from the ISDC and the Instrument Teams on all aspects of the INTEGRAL mission including the calibration and the analysis software. This was followed by a hands-on session during the last two days allowing the participants to exercise what they have learned.

13 September 2004 Today, the Director of the Scientific Programme (Prof. David Southwood) has released the third Announcement of Opportunity (AO-3) for observing proposals with INTEGRAL. This announcement solicits proposals for observations to be caried out in the period from February 2005 to August 2006. Proposers from all over the world are welcome to participate. All proposals will be subject to an independent peer review by the INTEGRAL Time Allocation Committee (TAC). Potential proposers are expected to prepare and submit proposals in electronic form by using the INTEGRAL Proposal Generation Tool (PGT) software. The deadline for Proposals submission is Friday 29 October 2004, 15:00 CEST.

More information can be found on the INTEGRAL homepage (AO-3 section) and the AO-3 Documentation page.

08 September 2004 ISOC is completing the preparations for the forthcoming Announcement of Opportunity (AO-3) which will be released on 13 September 2004 calling for new INTEGRAL observing proposals for the period February 2005 until August 2006.

Furthermore, this issue of the ISOC Newsletter provides you with latest news on INTEGRAL as highlighted below: As before, the spacecraft is performing flawlessly. Unfortunately, on the payload side, we witnessed the malfunction of another SPI detector (#17) on 17 July. The count rate from the detector went to almost zero and has remained at this value despite initial recovery attempts. Investigations into the cause of this malfunction are on-going. SPI continues to operate with 17 out of 19 Ge detectors.

The past months and weeks have been busy with TOO's and more GRB's in the FOV. The INTEGRAL GRB 031203 is the closest GRB on record but also the faintest. Two papers in Nature (Vol. 430, August 2004) by Sazonov et al. and Soderberg et al. describe this unique event. Using INTEGRAL and XMM-Newton data on NGC 4388, V. Beckmann et al. (ApJ, in press) found more evidence that massive black holes are surrounded by a doughnutshaped dust cloud.

The proceedings of the 5th INTEGRAL workshop (Munich, 16-20 February 2004) are in press and the special publication ESA SP-552 will be available shortly.

05 August 2004 A gamma-ray burst detected by ESA's INTEGRAL gamma-ray observatory on 3 December 2003 has been thoroughly studied for months by an armada of space and ground-based observatories. Astronomers have now concluded that this event, called GRB 031203, is the closest cosmic gamma-ray burst on record, but also the faintest. This also suggests that an entire population of sub-energetic gamma-ray bursts has so far gone unnoticed...

26 July 2004 A failure occurred on SPI detector #17 on Saturday July 17, 08.20 Z. (A similar failure occured on December 6, 2003 on detector #2). All parameters were nominal just before the failure of detector #17 which was identified with low count rates that were "out-of-limits". The malfunctioning detector #17 was put into a "safe state" as soon as possible. A first recovery plan was attempted on Monday July 19. The results of this attempt are currently being analysed.

20 July 2004 Using ESA's INTEGRAL and XMM-Newton observatories, an international team of astronomers has found more evidence that massive black holes are surrounded by a doughnut-shaped gas cloud, called a torus. Depending on our line of sight, the torus can block the view of the black hole in the centre. The team looked 'edge on' into this doughnut to see features never before revealed in such a clarity.

10 June 2004 There is a vacancy for two Scientists in the INTEGRAL Science Operations Centre, currently under re-location to the European Space Astronomy Centre (ESAC) at Villafranca near Madrid, Spain.

Applicants should have a Ph.D degree in physical sciences with good knowledge of space astronomy, preferably in high-energy astrophysics. Experience in science operations of space-based observatories and knowledge and experience of the development and use of scientific software is considered advantageous.

Applications from external candidates for these posts should reach the ESOC Human Resources Service not later than 8 July 2004, and should preferably be made on-line at the ESA Web Site (www.esa.int - Careers). Those unable to apply on-line should submit their CV to the Head of the Human Resources Service, ESOC, Robert-Bosch strasse 5, D-64293 Darmstadt, Germany.

The planning for the move of the ISOC from ESTEC to ESAC is continuing. Full ISOC operations will transfer to the ESAC at the start of AO-3 observations. During the transfer, ISOC will continue to fully support INTEGRAL operations ensuring that the 8-hour ToO response time is met.

31 March 2004 INTEGRAL is performing very well and we have witnessed a number of key events in the recent months which will be addressed in more detail below. Consequently this issue of the ISOC Newsletter is a bit longer than usual.

The 5th INTEGRAL Workshop was held in Munich, between the 16th and 20th February 2004. It was organized by the members of the gamma-ray group of the Max-Planck-Institut für extraterrestrische Physik located in Garching and was jointly sponsored by ESA, NASA, DLR, MPE and INTA. It was an exciting week during which around 230 participants from all over the world, displayed and discussed their scientific results obtained by INTEGRAL during the first year of nominal mission operations. In particular the large number of young people attending the workshop was very encouraging. The proceedings will be published by ESA (as ESA SP-552) in early Summer 2004.

INTEGRAL has resolved the long standing question as to the nature of the diffuse glow of soft gamma-rays seen from the central region of our Galaxy. INTEGRAL observations have shown that most of the emission is produced by individual point sources. Results and more details have been published by F. Lebrun et al. in March 2004 (Nature, Vol. 428, p. 293).

Since the last ISOC Newsletter #10, four more GRB s have been observed in the FOV of the main instruments including GRB 040106 of 60 s duration whose location (within a 3.2' error) and trigger time has been distributed by IBAS just 15 s after the event, a record of speed and accuracy.

17 March 2004 ESA's INTEGRAL gamma-ray observatory has resolved the diffuse glow of gamma rays in the centre of our Galaxy and has shown that most of it is produced by a hundred individual sources. INTEGRAL's high sensitivity and pointing precision have allowed it to detect these celestial objects where all other telescopes, for more than thirty years, had seen nothing but a mysterious, blurry fog of gamma rays ...

Report on the 5th INTEGRAL Workshop

05 March 2004 The 5th INTEGRAL Workshop was held in Munich, between the 16th and 20th February 2004. It was organised by the members of the gamma-ray group of the Max-Planck-Institut für extraterrestrische Physik located in Garching and was jointly sponsored by ESA, NASA, DLR, MPE and INTA. It was an exciting week during which about 230 participants from all over the world and mostly quite young, displayed and discussed their scientific results obtained by INTEGRAL during the first year of nominal mission operations.

28 January 2004 On 3 December 2003, at 22:01 UT, the blast from a massive cosmic explosion washed over the Earth and ESA's orbiting gamma-ray observatory, INTEGRAL. Seconds later, thanks to some ingenious computer software, astronomers knew about the explosion and exactly where to point their telescopes.

Gamma-ray bursts explode at random throughout the Universe. They usually last for less than a minute and astronomers believe that they are produced when massive stars explode in distant galaxies. Rapid follow-up observations of gamma-ray bursts are crucial because of the speed with which they fade.

ESA has set a new record for speed and accuracy with the latest performance of the INTEGRAL Burst Alert System (IBAS). As well as the 3 December burst, which IBAS located in 18 seconds, another burst on 6 January 2004 was detected, localised and an alert sent to astronomers in just 12 seconds.

For more information, see the ESA Portal Story: ESA's rapid reaction force and the INTEGRAL Picture of the Month (February 2004)