The INTEGRAL ISOC Newsletter #6 is available

11 December 2002 Integral, the European Space Agency's gamma-ray satellite, has taken its first images and collected its first scientific data. These "first-light" images confirm that Integral is working superbly. Everyone involved with the project is delighted with its performance so far.

26 November 2002 A. Bazzano, A. Paizis, and the INTEGRAL Science Team report in GCN Circular 1706 the detection of GRB021125 at 17:58:30 UTC with a duration of 20 sec in the IBIS field of view with the ISGRI and PICsIT detectors. The event is confirmed by the SPI anticoincidence system. The burst peak intensity was about 2-4 Crab in the energy range 15-120 keV.
Also Ulysses, Mars Odyssey-HEND, RHESSI (GCN Circular 1707) and Konus (GCN Circular 1709) observed this GRB.

17 November 2002 During the night from 16 to 17 November, INTEGRAL has been pointed towards Cygnus X-1 as a target for SPI commissioning phase using a hexagonal dithering pattern. IBIS and SPI have obtained their first astronomical images.

The origin of the gamma-ray lines is not fully understood so far, yet the measurements impressively demonstrate the capacity of SPI to perform detailed studies of gamma-ray line profiles. For example, the spectrum at 2.2 MeV is composed of a narrow instrumental background line at the rest energy of the deuterium line (2223 keV), and a broadened and possible redshifted line with a mean energy of 2216 keV and a width of 16 keV (FWHM). Subtracting off the instrumental background removes the narrow deuterium line and reveals the excess emission during the flare period.

A more detailed study of the event and a more refined analysis of the data, which were acquired only 5 days after the switch-on of the SPI Germanium camera, is in progress.

08 November 2002 Full IBIS nominal activation was completed 06 November. The IBIS parameter optimisation phase is planned to continue for the next days. IBIS is now working in standard mode, with veto HV switched on, PICSIT and ISGRI in nominal.

06 November 2002 has beeen reached early morning of 06 November. The energy resolution of the SPI Ge detectors at 4000V are nominal except detector 15 which is slightly worse. The HV of detector 15 will be adapted in order to find the best compromise.
.... more

01 November 2002 After having successfully completed all orbit transfer maneouvres the final mission orbit has been obtained with perigee height of 9049.6 km and apogee height of 153657.2 km, inclination 52.246 degree.

30 October 2002 On October 27, 2002 around 8:34 UT the anti-coincidence subsystem (ACS) of the INTEGRAL-spectrometer SPI has observed its first gamma-ray burst (GRB). It could be seen already in the overall counting rates of the anticoincidence subsystem (ACS) of SPI with 50 ms time resolution (see figure 1 of the attachment). Calculating the average over 10 time bins the burst becomes clearly visible (see figure 2 of the attachment. The time of the rise of the GRB is identical to the time of the burst GRB 021027 reported by the GCN. So we are confident that the ACS of SPI has detected its first GRB! This detection shows that the ACS works as expected and is able to trigger on GRBs. The SPI team considers this as a great success.

Courtesy: A. v. Kienlin (MPE Garching) and the SPI team.

27 October 2002 First deconvolved image from JEM-X (1). Since the pointing was done on a practically empty field, with just a few very weak sources, no sources are detected in the ~ 2000 sec exposure.

25 October 2002 For thermal uniformity reasons, all 8 modules were powered but only one module (shown in yellow) was biased to -120 V for about one hour. The module temperature was around -10Â°C. On the picture one notes the good uniformity of the active module and in the spectrum the W and CsI (probably) fluorescence lines as well as a weak 511 keV line due to the calibration source. The threshold was very low (close to 10 keV), it results in part from the exceptionally low temperature.
This tests demonstates the excellent performance of ISGRI.

Note that regular updates on IBIS can be found on the IBIS Homepage (IAS, Roma) 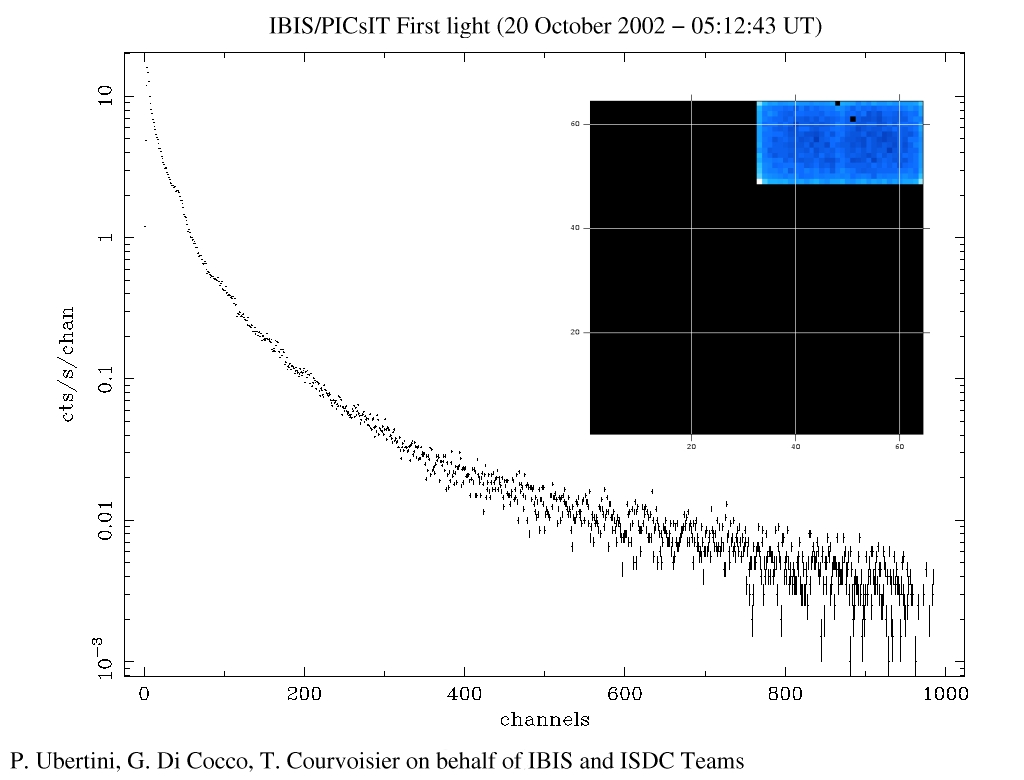 20 October 2002 The first light image is showing the first shadowgram of the detector module 1 of IBIS/PICsIT and the spectrum of single events of the same module.

18 October 2002 (I) SPI and JEM-X digital electronics boxes were powered up as timelined. Integral is in inertial pointing now and will do a slew to the outgassing attitude later today. 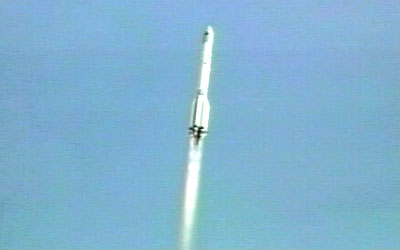 Integral was succesfully launched at 06:41 from Baikonour

17 October 2002 Solar panels were deployed succesfully. Integral is safe and in a stable configuration

17 September 2002 The Flight Acceptance Review Board recommended in July that the INTEGRAL Science Working Team re-assesses the perigee height of the INTEGRAL orbit. It was decided to change the baseline orbit and lower the perigee height by 1.000 km from 10.000 km to 9.000km. The expected increase in the radiation environment is insignificant and will not adversely affect the scientific products. The lowering of the perigee will however save a substantial amount of fuel (20 kg equivalent to 2-3 years of operation) and thus provide a healthy margin in the fuel budget.

23 August 2002 Today, the INTEGRAL spacecraft was transported from ESTEC to Amsterdam Schiphol Airport where it left for Baikonur on-board a Russian Antonov 124 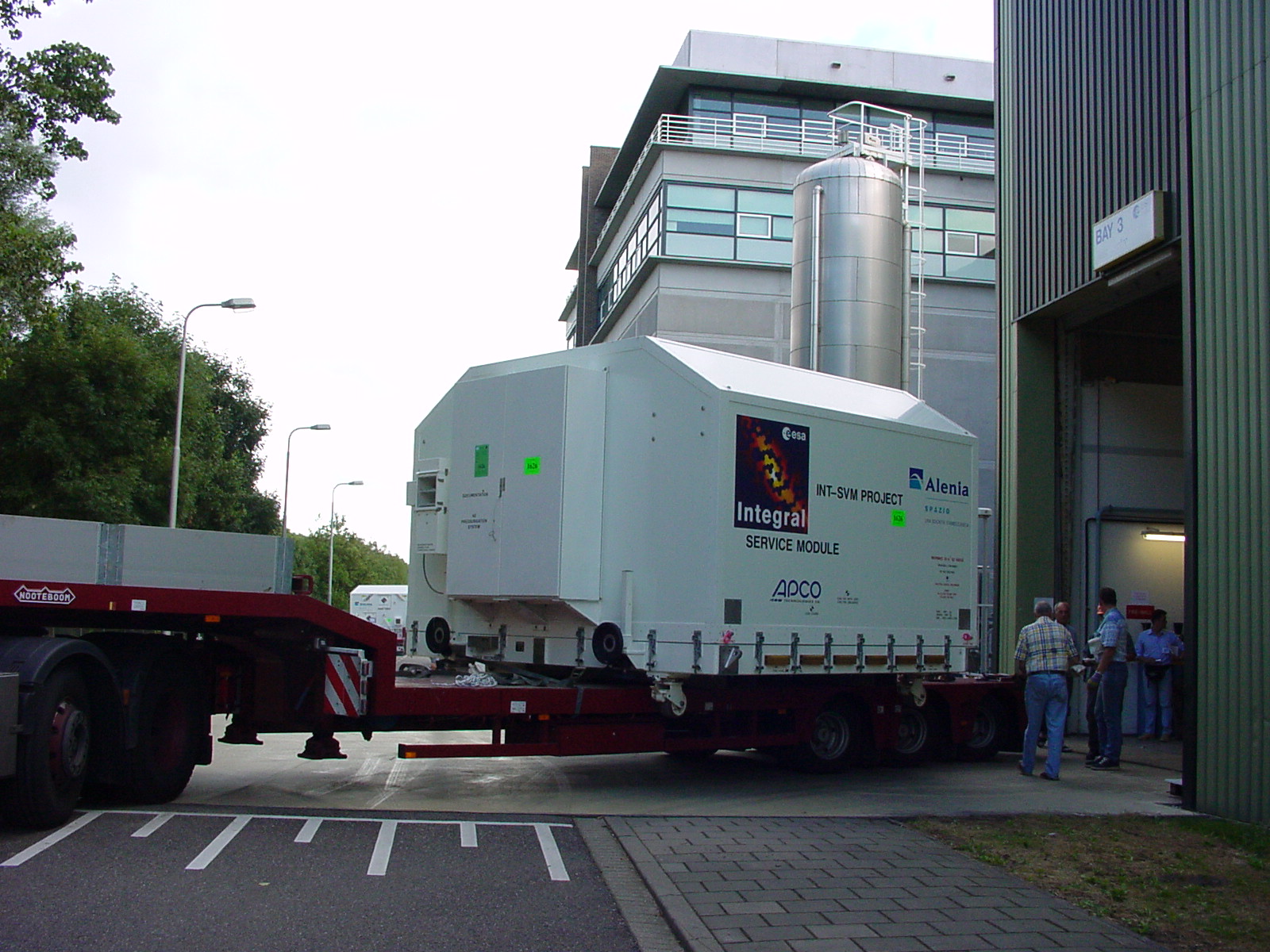 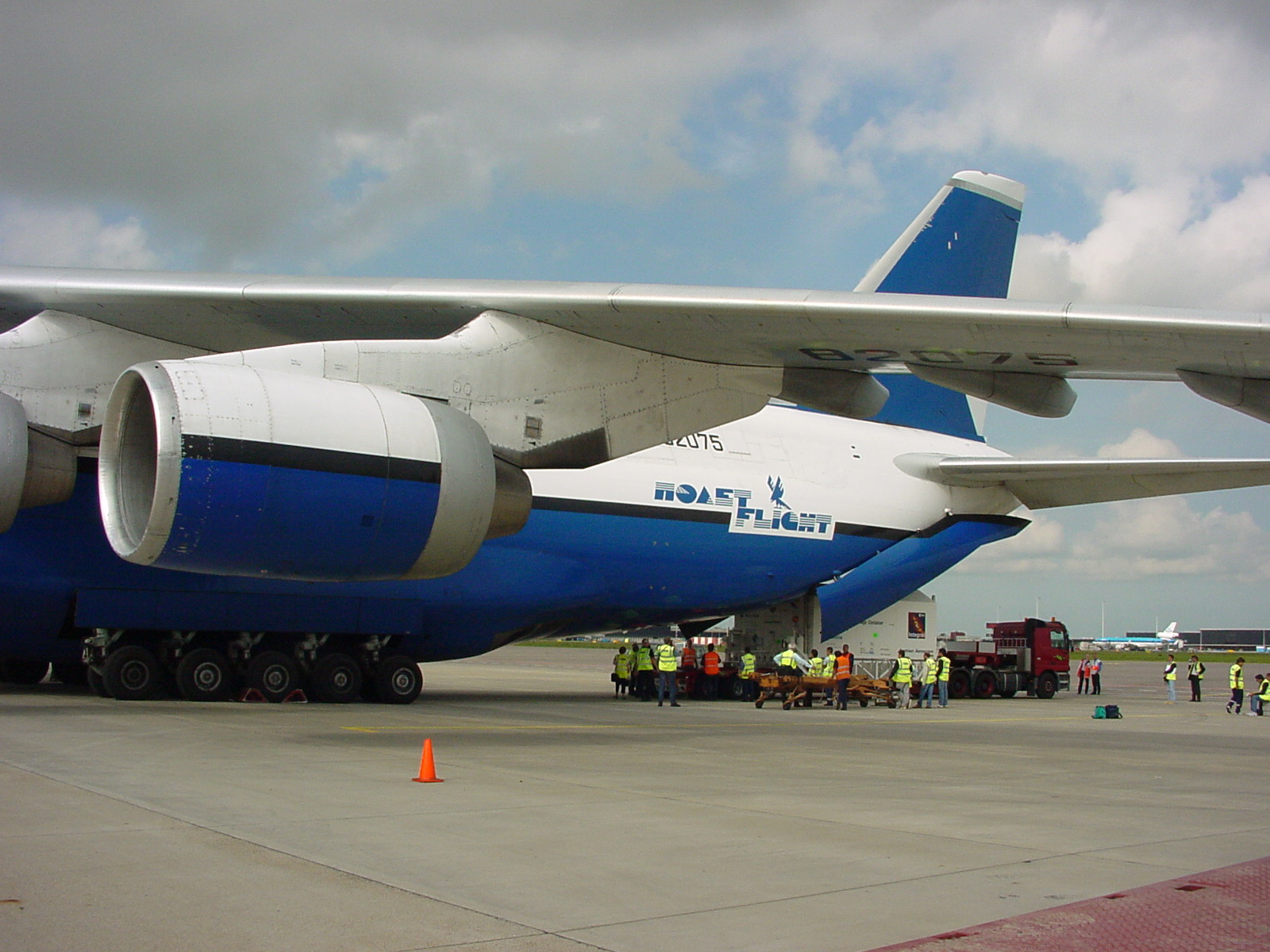 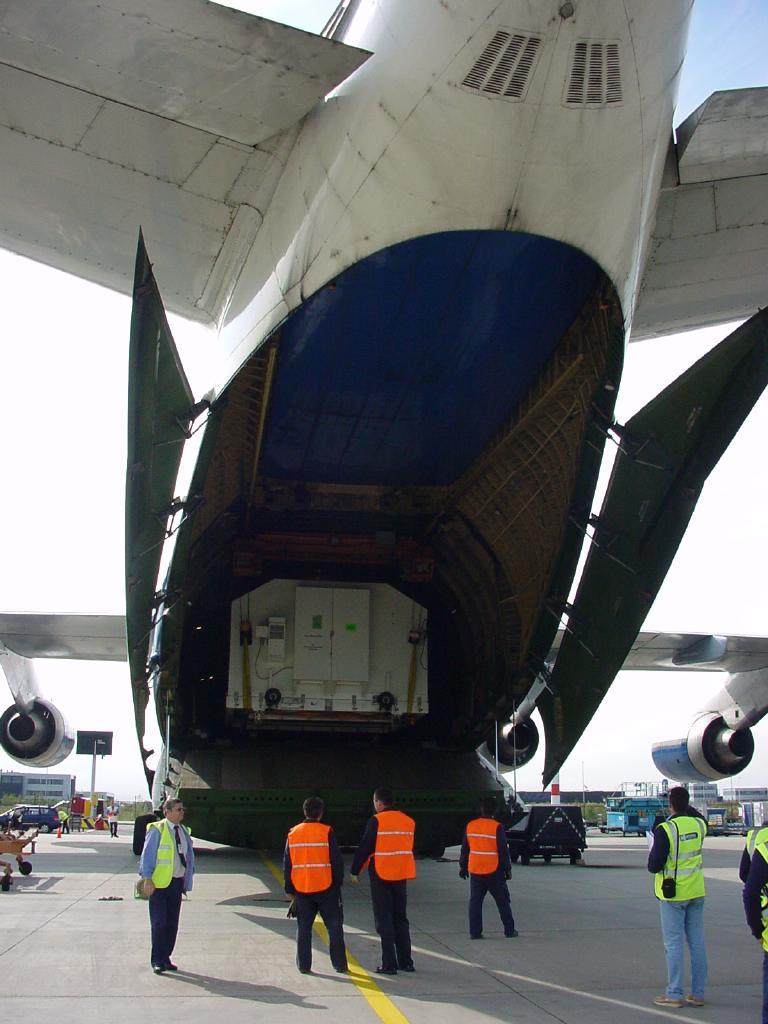 19 July 2002 Today, the Flight Acceptance Review Board met in ESTEC and concluded the flight readiness for the spacecraft, instrument and ground segment.

June 2002 The ESA internal review on the readiness of the INTEGRAL operational and science ground segment has been successfully completed.

May 2002 The ESA internal review on the flight acceptance of the 4 INTEGRAL scientific instruments has been successfully completed.

March 2002 The calibration has been completed successfully. For further information see links to instrument sites and the Picture of the Month (March 2002).

The INTEGRAL ISOC Newsletter #4 is available

The scientific calibration started at ESTEC

23 January 2002 The full payload will be exposed to radioactive sources in order to complement instrument level calibrations and to provide cross-calibration for the high energy instruments. The activities will last 2 weeks (24 h/day, 7d/week). Details can be found here