23 December 2015 INTEGRAL will perform new, out-of-TAC, ToO observations on the black-hole X-ray binary transient V404 Cyg. The source showed unexpectedly renewed activity today (see the various ATels and GCN Circulars). This is the same source which showed its fireworks in June. The observations will be done under the public flag. The observations are planned for 26 December to 31 December.

18 December 2015 Due to a malfunction, the integration of histograms in INTEGRAL's IBIS
PICsIT layer has been interrupted. Recovery will require a lengthy procedure, estimated at 2 days, which will interrupt all IBIS data taking. After evaluation of the technical risks and scientific impact it has been decided to delay the re-activitation of PICsIT histograms to mid January 2016. Besides operational reasons for the wait, this also ensures only observing programmes aimed at diffuse emission will be affected.

INTEGRAL TOO observations of Mrk 421 flaring in the VHE band

How INTEGRAL was 'lost' and became a space rock

15 December 2015 When INTEGRAL changed its orbit last January/February not everywhere was its new orbit info updated. At the end of November, Jonathan McDowell (Harvard-Smithsonian Center for Astrophysics) tweeted that asteroid-observing astronomers had been tracking an unidentified object, WJ2B5AC, with a 3831 min period. It had been found by the Catalina Sky Survey, while looking for asteroids. It was checked against known satellites using TLEs, but got no match. And thus it became, temporarily, a candidate space rock. See here for the full story.

10 December 2015 The ISDC has released INTEGRAL Offline Scientific Analysis Software (OSA) version 10.2. The main improvements of version 10.2 over version 10.1 are updated instrument calibrations. The new software is available for download from the ISDC. 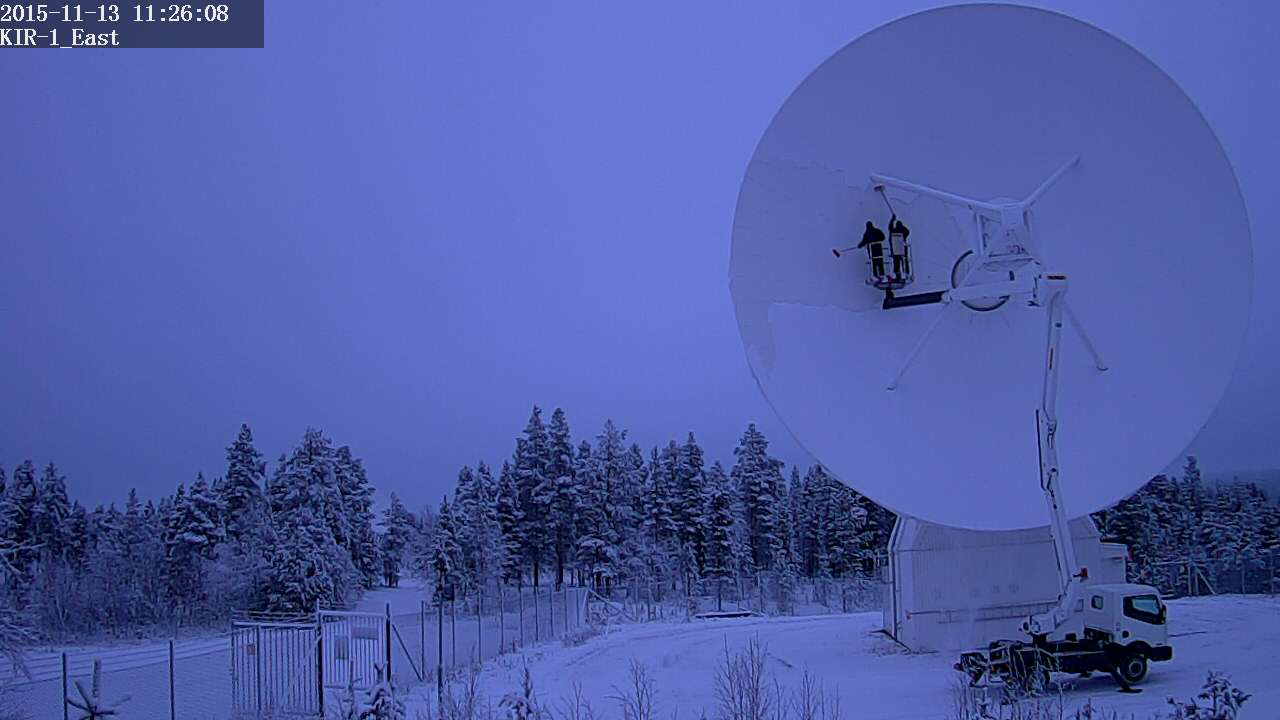 Snow-cleaning for the INTEGRAL Mission

13 November 2015 With a winter storm coming in and temperature not solid under 0 degrees, a layer of snow builds-up at the ESTRACK KIR-1 antenna at Salmijäi, Kiruna. The M&O team is using the new acquired "Cherry Picker" to manually clean the reflector surface to ensure INTEGRAL will not miss a bit of its valuable scientific data.

17 October 2015 Thirteen years ago, on 17 October 2002 at 6:41 CEST, the INTEGRAL observatory was launched from Baikonur. Today, it still remains in excellent health and continues to observe the gamma-ray and X-ray sky.

INTEGRAL TOO OBSERVATIONS OF THE ACCRETING MS PULSAR IGR J00291+5934

23 July 2015 The BHC GS 1354-645 has been in outburst since the end of June 2015 and seems to have reached its peak intensity at hard X-rays. An INTEGRAL ToO observation has been approved at the end of revolution 1572 as part of a multi-wavelength campaign, including ALMA, ATCA and possibly other observatories.

INTEGRAL TOO observations of a bright BeXRB transient: V 0332+53

9 July 2015 The Be X-ray binary transient V 0332+53 entered into outburst again in mid June after several years of quiescence and has by now reached almost 600 mCrab in the hard X-ray band. An INTEGRAL ToO observation has been accepted in the first part of revolution 1565 in order to study the source near the peak of the outburst. The source evolution can be followed, e.g., via the link from the BeXRB Monitor page.

9 July 2015 The INTEGRAL AO-13 General Programme, as recommended by the Time Allocation Committee (TAC) and approved by ESA's Director of Science and Robotic Exploration (Prof. Alvaro Giméz), has been released and the observers have been informed.

Astronomers use cosmic gravity to create a 'black-hole-scope'

6 July 2015 INTEGRAL, Fermi and Swift have used the magnifying power of a cosmic lens to explore the inner regions of a supermassive black hole in PKS 1820-311. The findings by A. Neronov et al. have been published online in Nature Physics today.

INTEGRAL TOO observations of another black-hole binary transient: GS 1354-645

2 July 2015 The black-hole X-ray binary transient GS 1354-645 entered an outburst early June. An INTEGRAL ToO observation was triggered to do simultaneous observations with Swift, SALT and ATCA, in the 2nd part of Revolution 1560, on 5 July 2015. The data will become immediately public.

28 May 2015 On various  occasions in June and July, using dedicated engineering windows, the INTEGRAL MOC will test the satellite behaviour in the low speed region of the on-board reaction wheels, which so far has been avoided. Allowing for lower speeds, might lead to significant fuel savings, but the feasibility and safety of the approach needs to be tested carefully. It might also affect the pointing accuracy and stability. Tests are currently foresee for June 8, 10, 11, 15, 16 and 24, as well as July 7. Data from these tests will be carefully asessed before a regular use of this approach will be considered.

Workshop: The New High-Energy Sky after a Decade of Discoveries

20 May 2015 From 5 to 9 October 2015 a workshop will be held in Rome to present and discuss, via invited and contributed talks (and posters), the main results obtained during the last decade in the field of high-energy astrophysics using INTEGRAL, and place these results in the context of other observatory-like space-based missions, such as Herschel, Plank, Swift, Fermi, AGILE, NuSTAR, MAXI, etc., as well as ground-based observatories. For more details please see the conference website.

INTEGRAL TOO observations of the magnetar SGR 1935+2154

20 March 2015 The Proceedings of the 10th INTEGRAL Workshop "A Synergistic View of the High-Energy Sky", in Annapolis, USA, 15-19 September 2014, has been published on-line in Proceedings of Science.

9 March 2015 Today, the Director of Science and Robotic Exploration (Prof. Alvaro Giméz Cañ) has released the 13th Announcement of Opportunity for observing proposals with INTEGRAL.

This announcement solicits proposals for observations to be carried out from January 2016 for a period of 12 months. Proposers from all over the world are welcome to participate. All proposals will be subject to an independent peer review by the INTEGRAL Time Allocation Committee (TAC). The deadline for proposal submission is Friday 17 April 2015, 14:00 CEST.

More information can be found on the AO-13 page.

20 February 2015 After the INTEGRAL detection of renewed activity at hard X-rays from a transient within the Globular Cluster NGC 6440 (ATel #7098), the source was identified with Swift/XRT to be most probably the accreting millisecond X-ray pulsar SAX J1748.8-2021 (ATel #7106). In response to a ToO request raised from the community, the Project Scientist has approved a public ToO observation of 100 ks which will begin at the start of revolution 1511 on 23 Feb 2015 at 12:20:46.

INTEGRAL back in business

13 February 2015 The fourth, and last, manoeuvre on 12 February of the INTEGRAL de-orbiting campaign was completed successfully. INTEGRAL is now in its final revised orbit. Science observations will start again on 15 February (Revolution 1508).

12 February 2015 ESA operations has provided widgets which are fed with the latest orbital tracks for ESA missions, or missions with significant ESA participation. Follow the link to `Track ESA Missions' and click on the blue name icon "Integral" to find out where INTEGRAL is.

27 January 2015 The second manoeuvre on 24 January, the largest of the 4 disposal manoeuvres, of the INTEGRAL de-orbiting campaign was successful. All operations could be executed as planned with no deviations from the timeline. As ever the satellite performed flawlessly. INTEGRAL is now back in science mode. The next, smaller, manoeuvre is planned for 4th February; see the News item on 9 January 2015. Follow ESA's Rocket Science blog for a detailed account.

16 January 2015 ISOC wishes you a healthy and fruitful scientific 2015. The AO-12 cycle of observations started on January 1st and will last 12 months. The INTEGRAL target lists and sky maps are available. The AO-12 Long-Term Plan is still in preparation, pending the new orbit (see ISOC News 9 January 2015). We refer to the ISOC webpage at http://integral.esac.esa.int for further information.

ISOC is preparing the next call for proposals requesting INTEGRAL observing time. The AO-13 release will be on 9 March 2015, with a deadline on 17 April 2015. The AO-13 cycle of observations will begin on 1 January 2016 and has a duration of 12 months.

9 January 2015 ESA needed to work on a possible future safe disposal of INTEGRAL after its end of life. The requirement to study such an option was put on the project, as well as all other missions in operations, after the failure of Envisat. The disposal studies found that a permanent disposal by 2029 was feasible, with a very low casualty risk, by a major orbit control manoeuvre. The earlier this manoeuvre would be done (at suitable periods), the more efficient in fuel usage it would be - in practice early 2015 is the earliest conceivable time. After review and endorsement by ESA's Independent Safety Office the disposal plan has been approved by the Director of Science and Robotic Exploration.

This means that the project will undertake manoeuvres in January and February 2015 in order change the orbit of INTEGRAL such that re-entry in the atmosphere and permanent disposal will be achieved in February 2029. These manoeuvres, will use roughly half of the remaining fuel at this stage (any later option would be more costly in fuel), still leaving propellant for 6-8 more years of operation after the manoeuvre. Note that this coincides - within the large uncertainties on both - with the time frame when operations are expected to become limited by the power of the solar panels.

A side effect of the orbit change is that INTEGRAL will no longer have revolutions of 3 sidereal days. Instead, one aims at implementing a scheme of 3 revolutions in 8 days in order to keep a repeating pattern for operations. The final orbit chosen is the best compromise found between fuel efficiency and operational use, allowing to continue science operations with minimal impact. The loss of science time due to a higher fraction of perigee passages is predicted to be less than 5%, and the seasonal visibilities do not change significantly either.

The foreseen sequence of events are as follows:

During this period, a suitable target has been chosen from the approved AO-12 programme which is easy to schedule and does not have critical time dependencies for the observations. No Target-of-Opportunity observation are foreseen.

7 January 2015 In the Announcement of Opportunity 12 (AO-12) the data access rights policy has changed with respect to previous AOs. From AO-12 and onwards, data or science rights to the targets or science in the field of view (FOV) of the instruments proposed by the PIs and accepted by the TAC will be allocated to these PIs with the usual 1-year proprietary period.

ISDC and ISOC have prepared a novel interface to download these data, ensuring that the guest observer is informed of the data policies and accepts them before downloading the data.

We invite you to make use of this interface and to report any suggestion to improve it to the INTEGRAL Helpdesk.