Is it a galaxy?

The galaxies in Gaia DR3

Gaia is not taking pictures as other telescopes do. Its measurements are essentially many 1D observations from various directions, characterized by their transit angle (the angle from Gaia to scan the object in view). By the end of the mission, Gaia will have observed each object on average 140 times, so that extended objects like galaxies are fully covered with observations.

Identifying galaxies from Gaia observations is a complex task, and candidate galaxies are identified from a number of modules utilising various properties, like parallax, proper motion, the combination of BP/RP spectra, brightness and variability. For example Coordination Unit 7 provides a list of 1 million active galactic nuclei and 2.5 million galaxy candidates. Unlike active galactic nuclei, the galaxies are not really variable, but only seem to be variable due to their extension combined with the Gaia on-board detection algorithm and scanning law. Hence are picked up in the variability processing.

The paper Gaia Data Release 3: The extragalactic content by the Gaia Collaboration, Bailer-Jones, C.A.L., et al. describes in detail the full set of galaxy candidates available in Gaia Data Release 3. The data set contains over 4.8 million sources but is aimed at being complete rather than pure, and will still contain many misclassifications.

A pure sample was selected from this data set, containing 2.9 million galaxy candidates with an estimated purity for this pure sample of about 94%. A sky map of this pure sample is shown below. Notably the galactic plane has a much lower density as compared to the sky map in figure 1. There is still evidence though for imperfect purity of the sample as seen from the overdensities at the Large Magellanic Cloud and Small Magellanic Cloud. Also seen in this sky map are artefacts from the scanning law.

Candidate galaxies are analysed by a number of algorithms and Coordination Groups. For instance the Extended Objects group, part of Coordination Unit 4, developed specific algorithms to retrieve the 2D surface brightness profile of the extragalactic sources by combining the information of the various 1D observations. A direct model finds the set of parameters of several specific light profiles that best reproduce the observations.

Gaia is observing from space which is a great advantage for the analysis of the morphology of the galaxies. From the ground, the blurring of the atmosphere modifies significantly the shape of the galaxies. The Gaia spacecraft however is able to perform a survey of galaxies up to its detection limit and to analyse accurately their morphology, which is an indicator of their evolution. 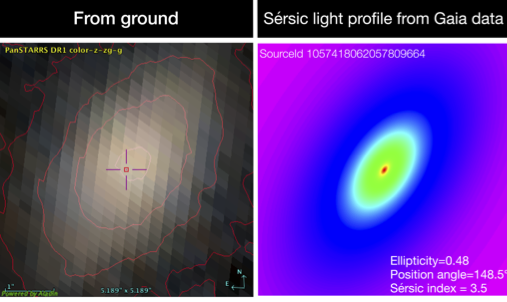 Figure 3: Gaia has analysed all its observations and was able to measure its morphology corresponding to an elliptical galaxy positioned in the sky at 148° with respect to the North pole. Using the fitted parameters of the light profile given in the Gaia DR3, it is possible to produce a synthetic image of it. This object has also been photographed from Earth with PanSTARRS, which allows to compare these images: from the ground, the atmosphere blurs the image, while Gaia "sees" more precisely its shape. Of the 914 837 galaxies with morphology in Gaia DR3, 57% were not measured from the ground; Gaia explores a population of tiny galaxies never resolved from the ground. Credits: ESA/Gaia/DPAC – CC BY-SA 3.0 IGO, based on the paper "Gaia Data Release 3: Surface brightness profiles of galaxies and host galaxies of quasars" by Ducourant, et al. 2022

About one million of galaxies were analysed, as selected from a fully unsupervised classification method of the Gaia DR2 combined with the WISE colour parameters. From these, 940 887 could be well fitted. The morphology derived (Sérsic profile) indicates that Gaia is measuring essentially red elliptical galaxies. A few disc galaxies are also measured that appear bluer than the elliptical galaxies. This is a consequence of the star formation in disc galaxies that make them appear bluer.

The galaxies have typical de Vaucouleurs effective radius (encompassing half of their total flux) of 1.5 arcsec but can be as small as 500 milli arcsecond. Gaia is therefore exploring a population of galaxies for which the morphology mostly cannot be measured from the ground.

From the redshift measurements provided by Gaia, it is possible to estimate the time taken by the photon to reach us. For the most distant galaxy in Gaia Data Release 3, it took 5.4 billion years travelling while for the closest one it is only 0.2 billion years. The effective radius measured characterising the morphology is an apparent radius. We notice, as expected, that the more distant, the smaller the galaxies. 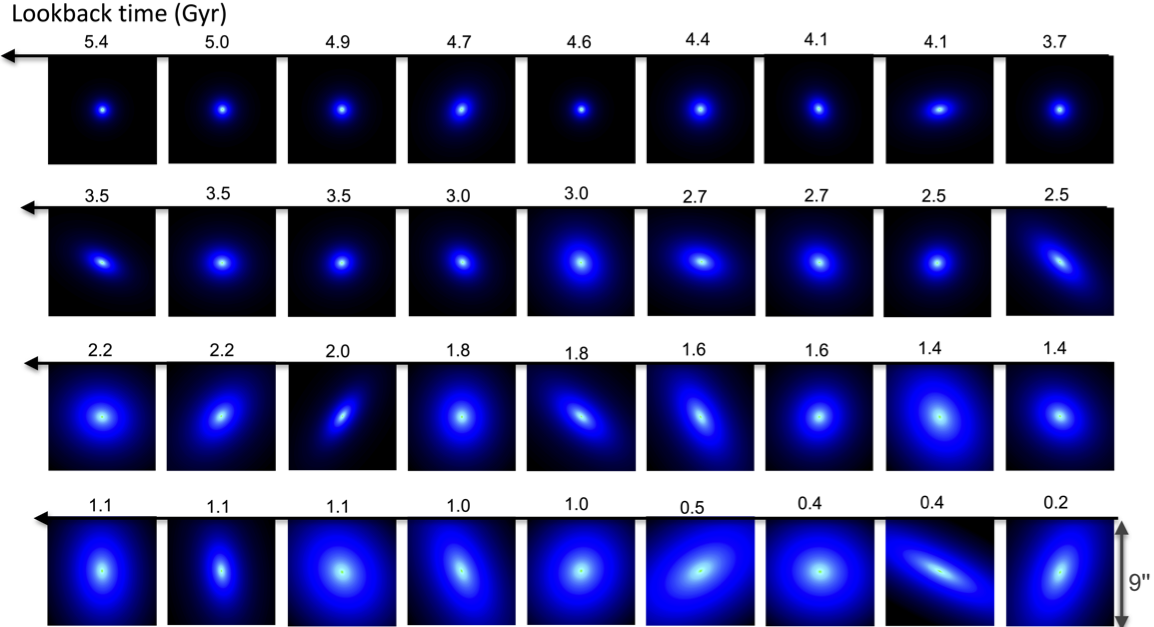 Figure 4: This figure shows the synthetic reconstructed images of galaxies from Gaia with an indication of their lookback time: from the closest galaxy analysed  (0.2 Gyrs) to the farthest (5.4 Gyr). Credits: ESA/Gaia/DPAC – CC BY-SA 3.0 IGO, based on the paper "Gaia Data Release 3: Surface brightness profiles of galaxies and host galaxies of quasars" by Ducourant, et al. 2022 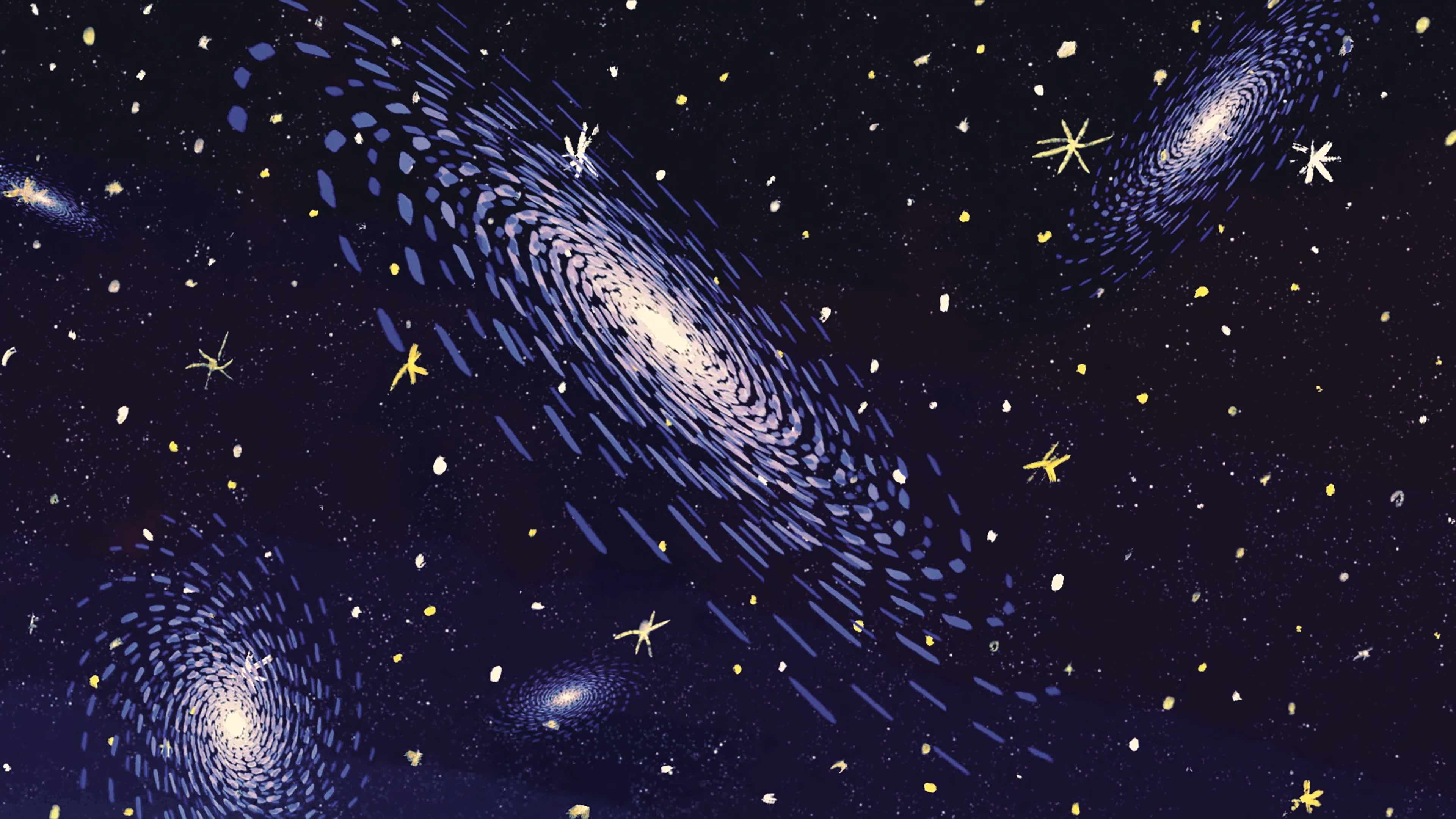