Is it a Solar System object? - Gaia

Is it an asteroid?

The objects in our Solar System seen by Gaia

For Gaia’s data release 3 (DR3) an impressive catalogue of 158,152 Solar System objects is published. This data set contains not only asteroids, but also 31 moons of planets in our Solar System. All these measurements (more than 23 million positions!) will permit to improve the orbit of asteroids to the point that subtle effects will become detectable, due to the presence of satellites (see below) or to small non-gravitational forces. For asteroids of intermediate brightness (G from about 13 to 17) the orbits obtained by Gaia data alone can sometimes be more accurate than those based on several years of astrometric data collected from the ground (vs. 34 months covered by Gaia). For them, there is also an improvement in the quality of positions (accurate to better than 1 mas) by a factor ~2 with respect to Gaia DR2.

The data set contains asteroids of different categories: from the near-Earth asteroids coming close to Earth to the Trans-Neptunian Objects beyond Neptune.

Figure 1. This scheme shows the distribution of different populations of asteroids present in Gaia DR3, across the Solar System (distance in au on the horizontal axis). The amount of objects is shown in logarithmic scale and is dominated by the large population of the Main Belt, but all categories are represented. Credits: Tanga, et al. 2022 - CC BY-SA 3.0 IGO.

The distinction between a star and an asteroid is not something that the Gaia spacecraft takes care of itself. It observes the light from sources on the sky, whether this source is a star, an asteroid or a galaxy. Which type of source has been observed is filtered out afterwards when the data is down on Earth through an extensive data processing pipeline by the Gaia Data Processing and Analysis Consortium.

Asteroids are found in two ways. For known asteroids and moons of planets, a prediction can be made of where the source should be at a specific time. This predicted position can then be matched with the observed sources by Gaia. Unknown asteroids can be extracted by the sequence of moving objects seen over time. Of course, star observations can form sequences of moving objects as well, the scale however of the movement is very different. While stars are far away, asteroids are a lot closer to Gaia and the amount they move over time as seen by Gaia, is much larger than compared to a star.

When we look at the asteroid positions today (13 June, release of Gaia DR3) and propagate forwards 10 days in time, we see they moved to different locations. Some of the asteroids move only slightly, while others travel further in the same 10 days, depending on their distance from the Sun (closer to the Sun, they move faster on their orbits). 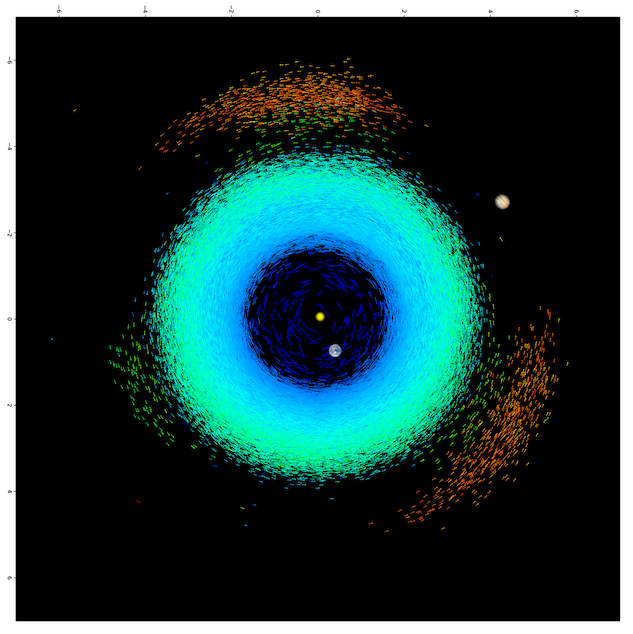 Figure 2. This image shows the position of each Gaia asteroid at 12:00 CEST on 13 June 2022, the Gaia DR3 release date. For each asteroid a segment representing its motion over 10 days is given. One can notice that inner bodies move faster around the Sun. The two "clouds" corresponding to the Trojan asteroids are visible. The colour is based on perihelion distance again as in the figure AsteroidsByPerihelionDistance.png, but with a modified palette (to make colours less dark in the external region). The approximate relative positions of Jupiter and the Earth for the same date are given (small disks - not to scale). Credits: ESA/Gaia/DPAC - CC BY-SA 3.0 IGO. Acknowledgements: P. Tanga (Observatoire de la Côte d'Azur). 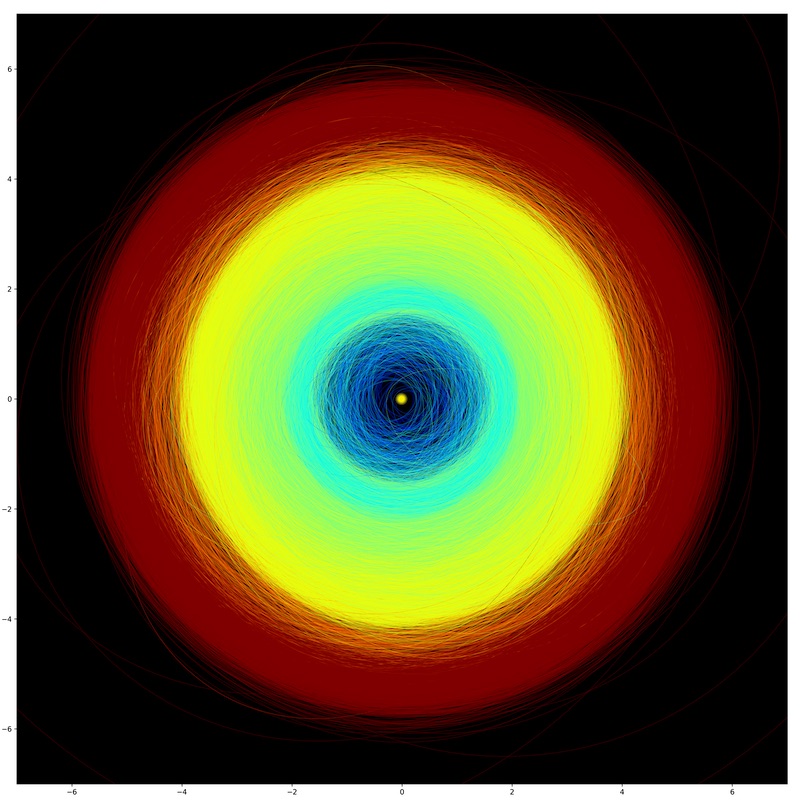 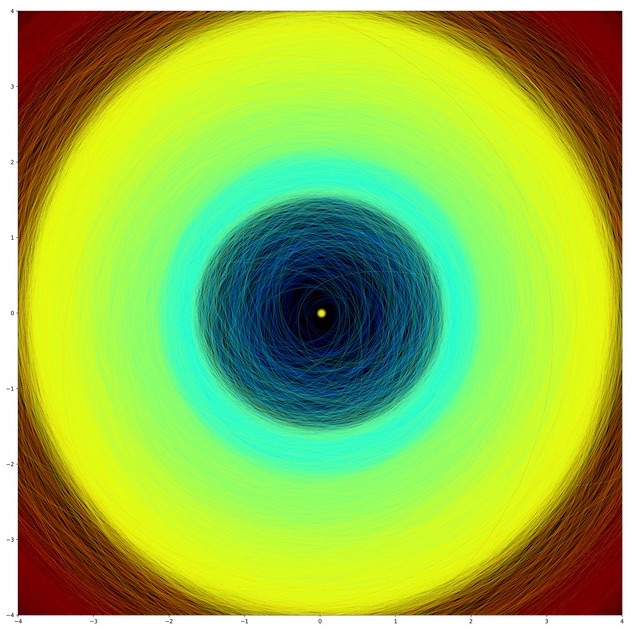 Figure 3. Orbits of the asteroids present in Gaia Data Release 3, from the inner parts of the Solar System to the Trojan asteroids at the distance of Jupiter, with different colour codes based on semi-major axis (semi-major axis is half of the maximum width of the orbit). The yellow circle at the centre represents the Sun. Colour code used is: blue is smallest semi-major axis, red is largest semi-major axis. On the left, the full survey (full distance range), on the right, a zoom into the inner part (within 4 au). There are so many orbits in these images, that the image becomes quite bright. Credits: ESA/Gaia/DPAC - CC BY-SA 3.0 IGO. Acknowledgements: P. Tanga (Observatoire de la Côte d'Azur). 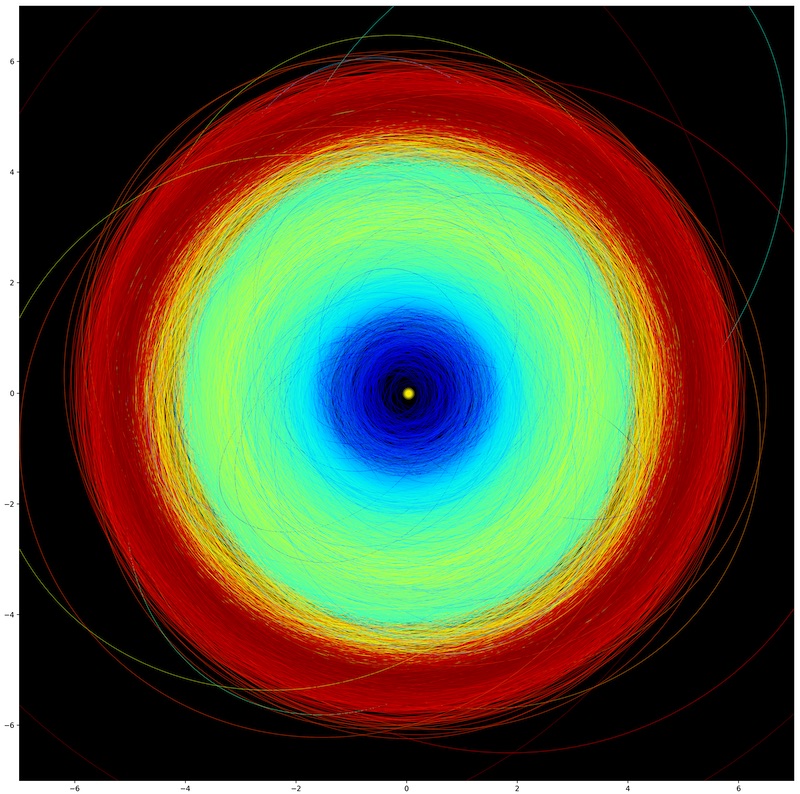 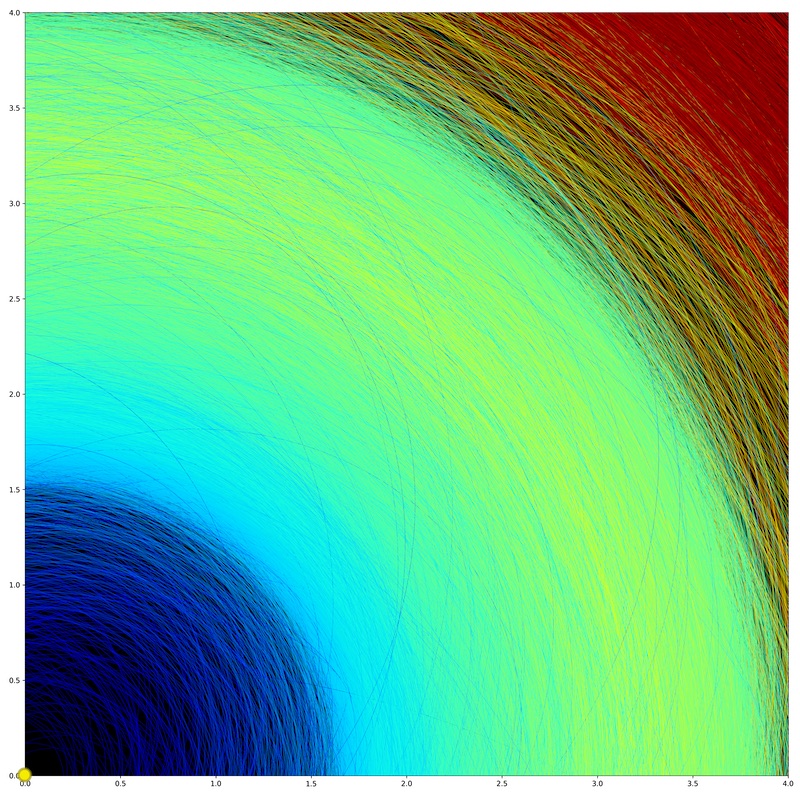 Figure 4: Orbits of the asteroids present in Gaia Data Release 3, from the inner parts of the Solar System to the Trojan asteroids at the distance of Jupiter, with different colour codes based on perihelion distance (perihelion distace is the minimum distance to the Sun). The yellow circle at the centre represents the Sun. Colour code used is: blue is smallest perihelion distance, red is largest perihelion distance. On the left, the full survey (full distance range), on the right, a zoom into a portion. This image can be compared to the same one that was made for Gaia Data Release 2 (see the comparison all the way at the botttom of this story). Credits: ESA/Gaia/DPAC - CC BY-SA 3.0 IGO. Acknowledgements: P. Tanga (Observatoire de la Côte d'Azur).

Given the accurate astrometry from Gaia, one exciting application is the ability to detect satellites of asteroids. Binary systems show an additional wobble in the observed photocenter, similar to the wobble observed for binary stars, but this method was not exploitable by traditional observation techniques from the ground, as the wobbling is really small! Only Gaia is now capable to see this wobble for asteroids. The complexity here lies in being able to distinguish the real signal of a possible unknown companion from effects due to an irregular asteroid shape or patterns in the natural noise affecting the data. 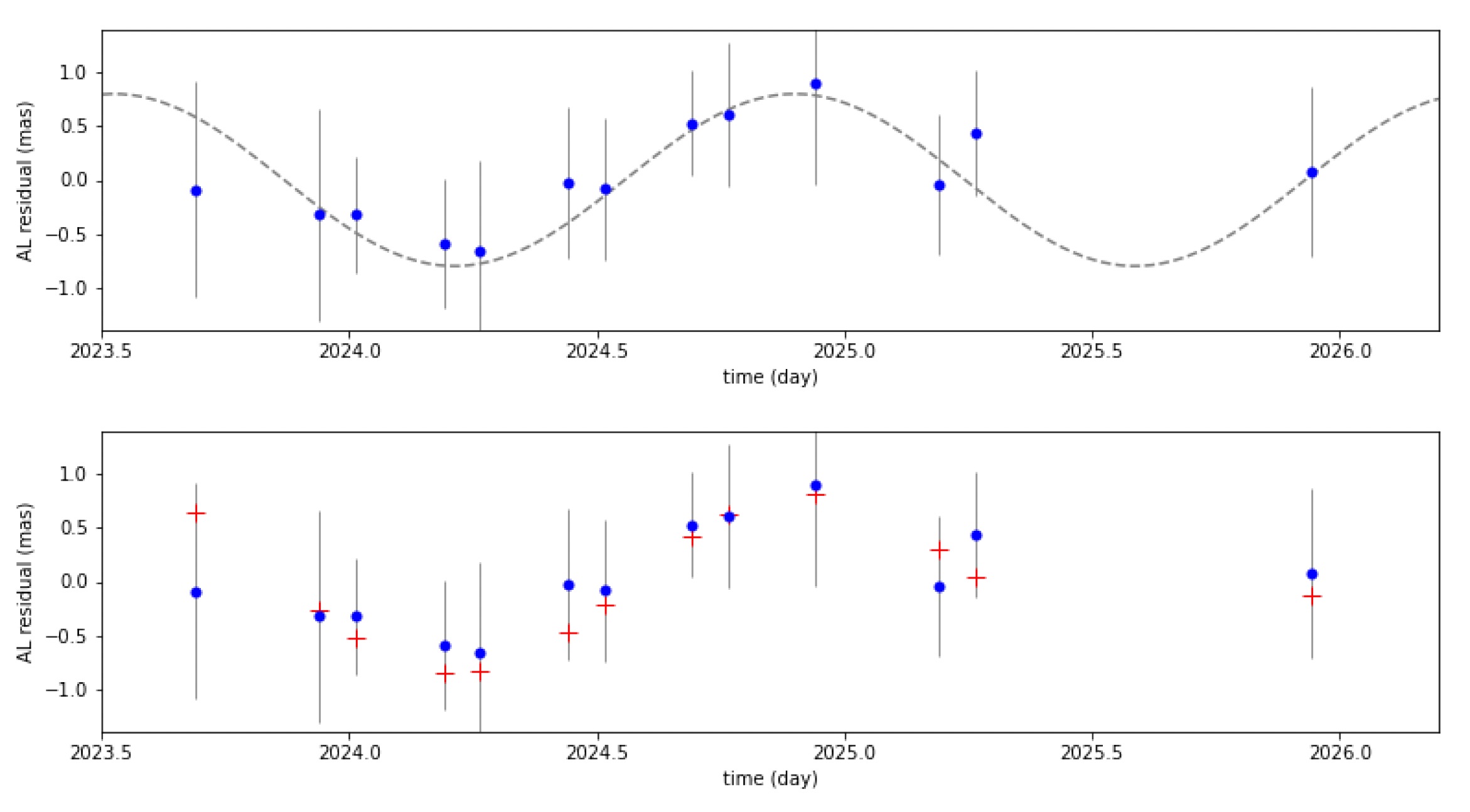 Figure 4. The case of the asteroid 4337 Arecibo is emblematic. The presence of a companion has not been discovered by Gaia, but from the ground by two stellar occultations. A first look in Gaia data revealed the periodic oscillation of the asteroid trajectory, thus resulting in the first astrometric signature detected for an asteroid satellite. Image credit: Tanga, et al. 2022 - CC BY-SA 3.0 IGO.

Accurate analysis and verification of the physical significance of the detections is required, but this difficult work has potentially a great reward. In fact, Gaia can reveal an asteroid population that has remained hidden up to now to other techniques.

Apart from improving our knowledge about the trajectory of asteroids in space Gaia can help understand what the asteroids are made of and give insight in their shape and rotation as well. The very accurate photometric measurements in the G band will be a priceless source for these investigations.

Moreover, this set of asteroid reflectance spectra have all been obtained by Gaia, so by one and the same spacecraft, and when processed on-ground, have gone through the same pipelines and calibrations. This means the data set is homogeneous and comparing reflectance spectra for asteroids has become a lot easier. Until now, about 4500 asteroids had a reflectance spectrum, in a sample of ~7000 spectra obtained mainly from the ground, scattered in different catalogues, obtained with different instruments, and calibrated in many different ways. Also, with respect to other surveys, Gaia goes deeper into the blue/violet end of the spectrum, poorly exploited up to now. Gaia’s catalogue of mean asteroid reflectance spectra is unique in all respects, it provides simply the largest survey of this kind up to now, and will ease up the work of many astronomers.

This enables several possibilities of investigation. For instance, asteroids can be categorized more easily into their families. Over time, bigger asteroids were bumped into, causing them to break-up in multiple smaller asteroids. These bigger asteroids were the ancestors of some of our current set of asteroids. Asteroids formed from the same ancestor, and sharing similar orbits, are referred to as a family. 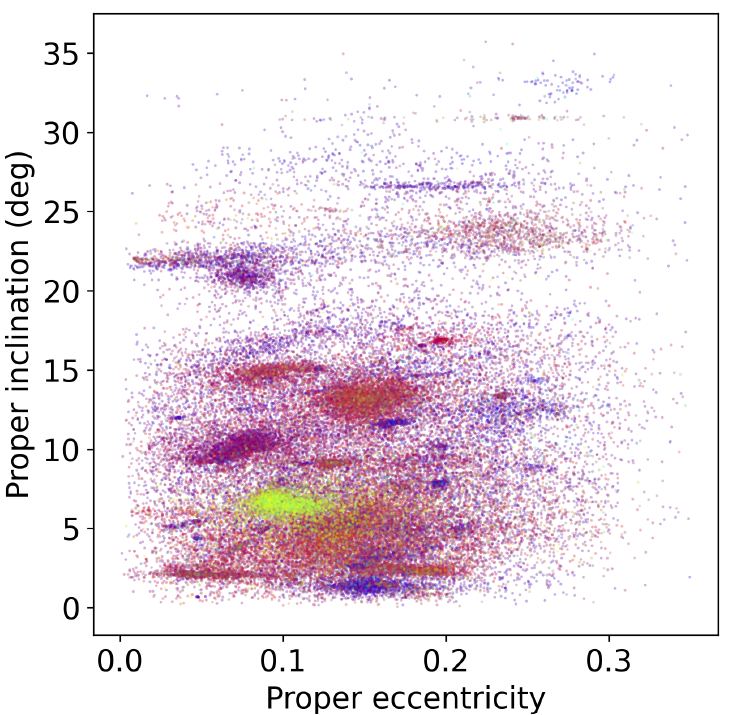 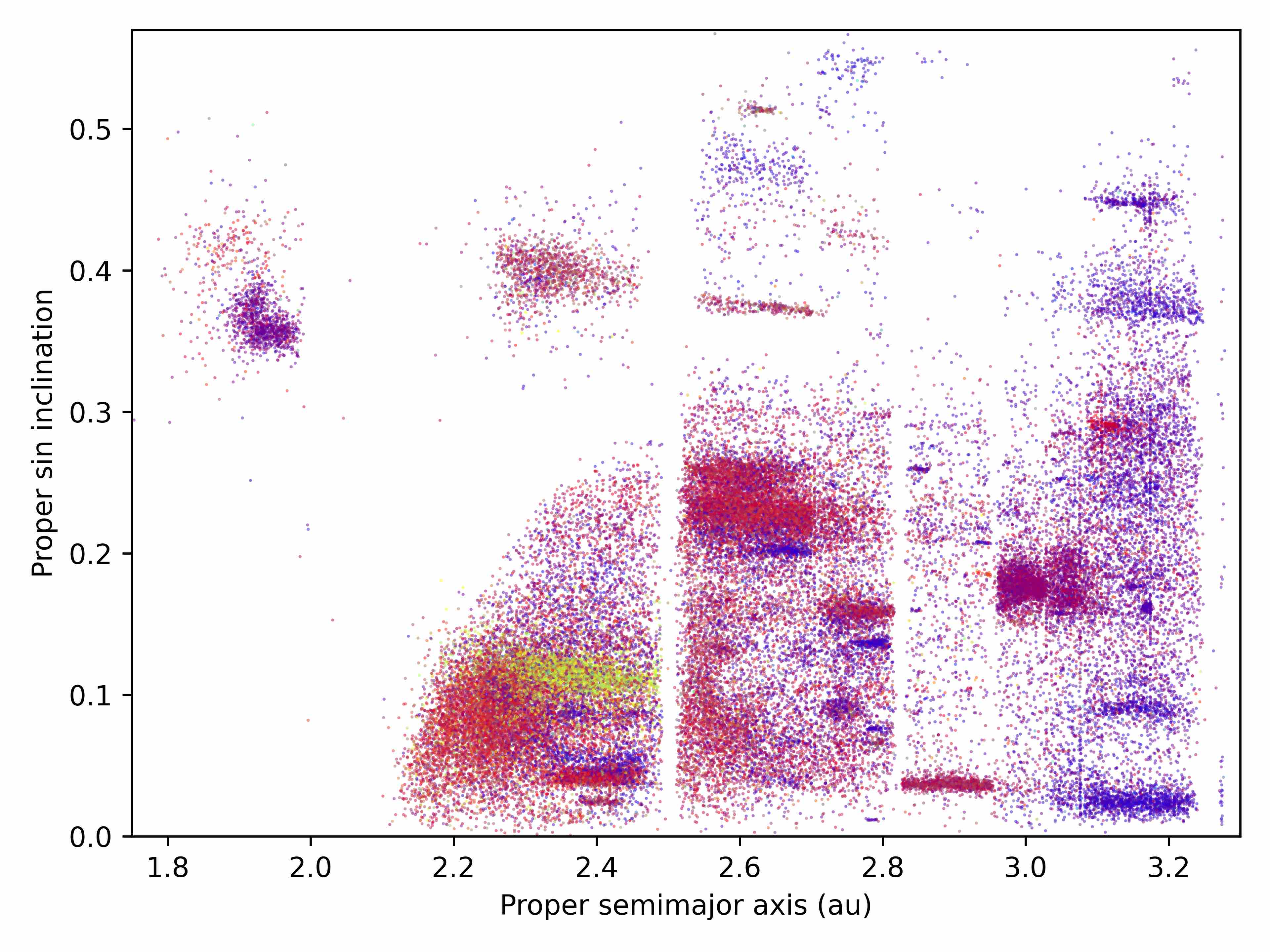 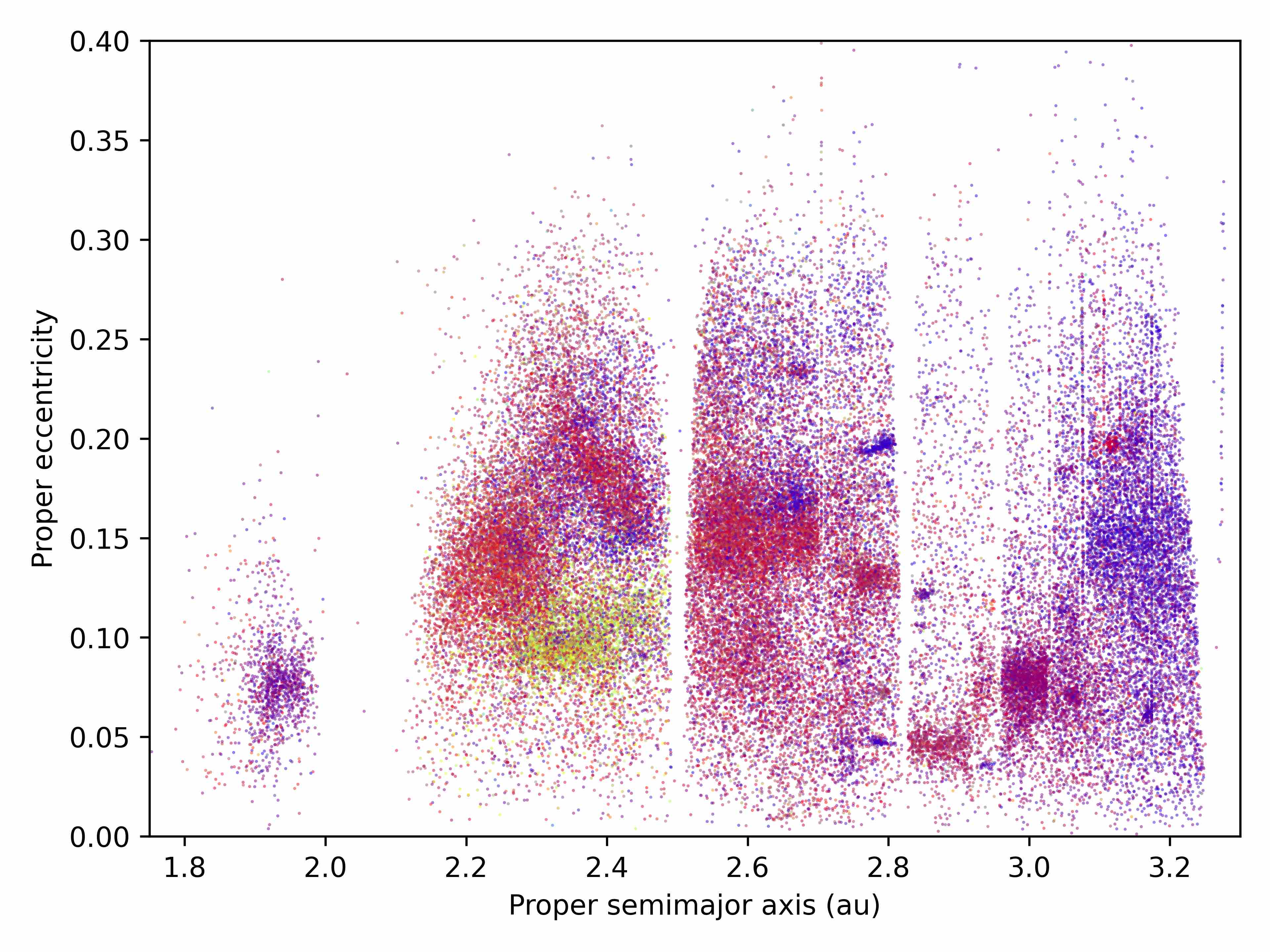 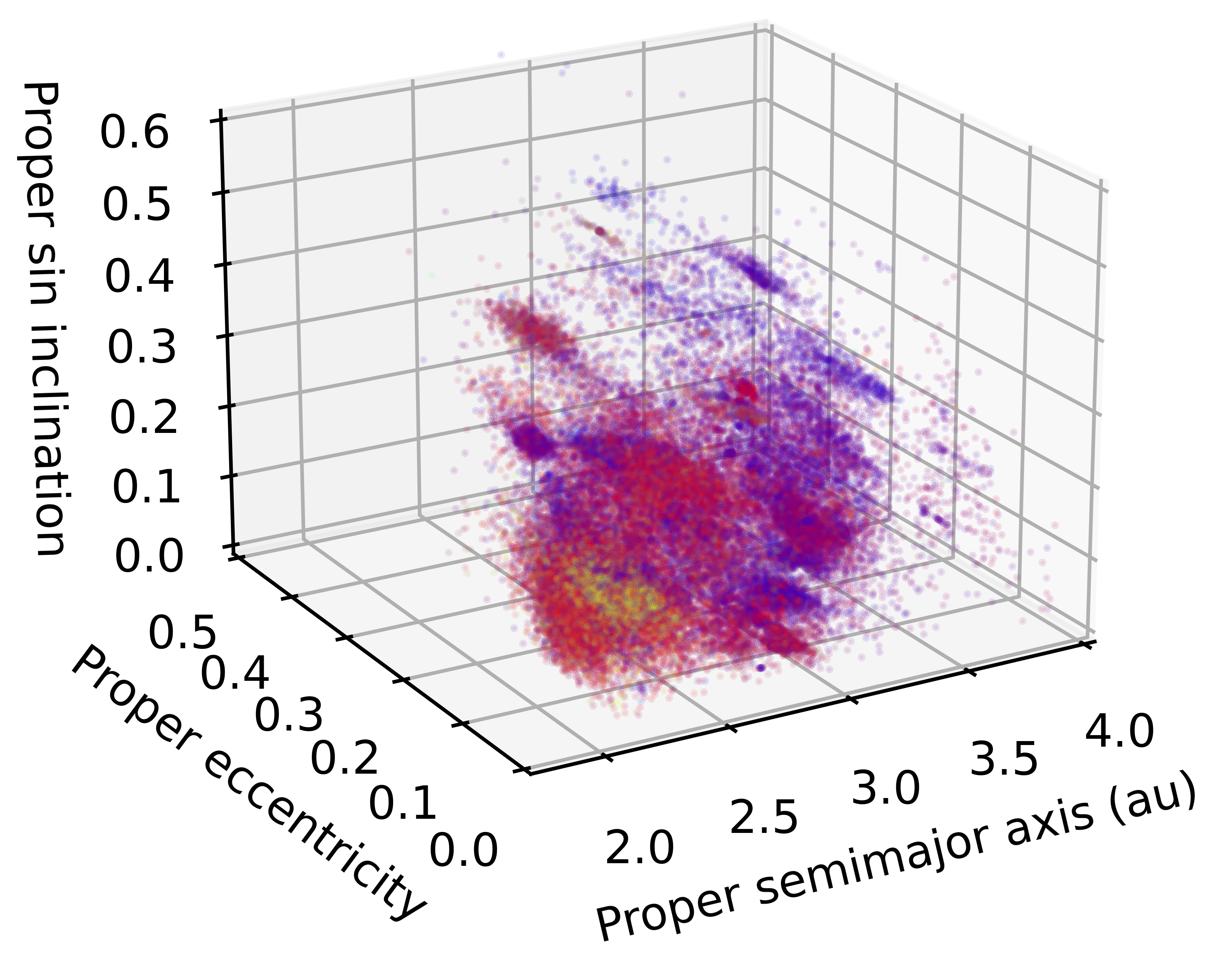 Figure 5. Asteroids form clusters, when plotting their orbital elements. These clusters mean that some orbits are similar, so are probably issued from the breakup of an ancestor asteroid. For this reason, families are an unique possibility to investigate the interior of objects formed in ancient times during the Solar System formation history. Credits: ESA/Gaia/DPAC - CC BY-SA 3.0 IGO, based on Gaia Collaboration, Galluccio, et al. 2022. Acknowledgements: Laurent Gallucio.​​​​​​

Using the Gaia data, and colour coding the asteroids based on their reflectance spectra, the families clearly stand out more clearly than ever before.

Animation 1: This video shows the huge progress that has been made by measuring ~60 000 reflectance spectra (colour and composition) of Solar System asteroids in Gaia’s data release 3, as compared to the approximately 7 000 spectra previously obtained for 4 500 asteroids. Credit: ESA/Gaia/DPAC, CC BY-SA 3.0 IGO. Acknowledgements: see below.

Animation 2. By far the largest group of Solar System objects in Gaia's data release 3 are 154 741 asteroids for which Gaia has determined their orbits. Depending on their orbits one can distinguish different groups of asteroids. Credit: ESA/Gaia/DPAC, CC BY-SA 3.0 IGO. Acknowledgements: see below. 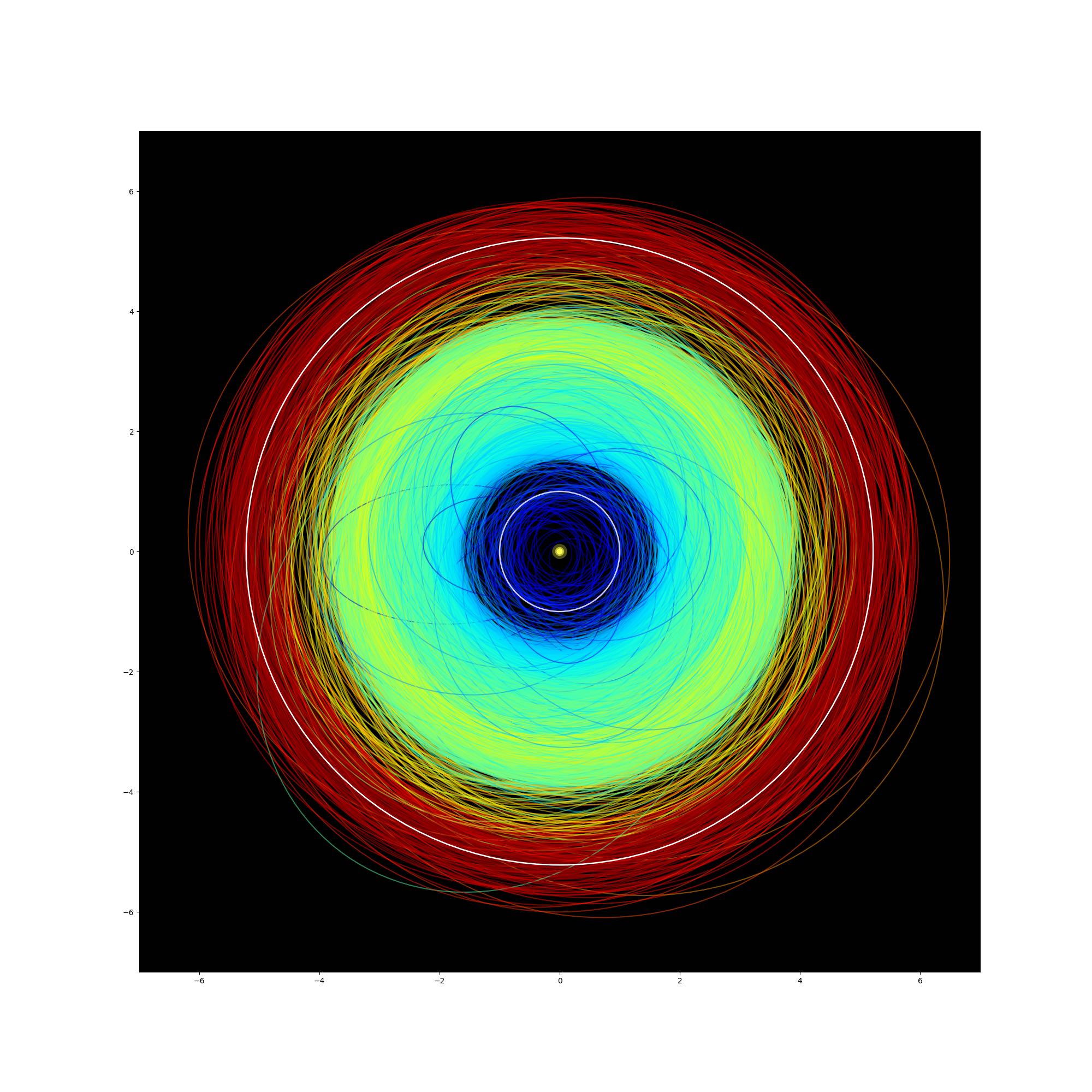