How do they blink? - Gaia

How do they blink?

The dimming and brightening of Gaia's variable stars

In the table below a first quick overview is given of variable stars in Gaia, as taken from the Gaia DR3 contents page. Full details can be found from the Gaia processing papers on the variability processing.

Below a few specific variable stars are highlighted on this page: nonradial pulsators and microlensing events. For some of these data sets, Gaia DR3 preview stories were published: "Cepheids and their radial velocity curves" and "Not only distances: What Gaia DR3 RR Lyrae stars will tell us about our Galaxy and beyond". Some of these types are discussed on dedicated pages like the eclipsing binaries and the planetary transits.

Nonradial oscillation modes cause a star's surface to move while it rotates, as shown in the animation. Dark patches are slightly cooler than bright patches, giving rise to periodic changes in the brightness of the star. The central modes were used in a sonification by increasing their frequency with a factor 8.6 million to shift them into the audible range of humans. The animation first shows two rows of modes commonly detected in hot fast rotators: 3 dipole modes, with sonification of the central zonal mode at 100 Hertz and 5 quadrupole modes where the central one can be heard at 300 Hertz.
The last row offers an animation and sonification of the joint effect of the three dominant oscillation modes for each of the stars KIC7023122, KIC9480469, and KIC 11080103, playing at 188 Hz & 180 Hz & 216 Hz, 199 Hz & 229 Hz & 203 Hz, and 124 Hz & 97 Hz & 99 Hz, respectively. These three pulsators were observed by both the NASA Kepler and ESA Gaia missions, as discussed in Gaia Collaboration, De Ridder et al. (2022). Animation Credit: ESA/Gaia/DPAC - CC BY-SA 3.0 IGO. Acknowledgement: Animation and sonification were created by Dr. Joey Mombarg, KU Leuven, Belgium; based on information from Gaia Collaboration, De Ridder, et al. 2022; Van Reeth et al. 2015, ApJS 218, id.2, 32 pp.; Mombarg et al. 2021, A&A 650, id.A58, 23 pp.

Most stars, including our Sun, experience oscillations, often termed starquakes or stellar vibrations. These vibrations cause periodic up-and-down motions of the gas inside the star and make them blink as they change their brightness with time. Stars blink with values from parts-per-ten to parts-per-million and with periods from seconds to weeks, depending on their mass and evolutionary stage.

Blinking stars offer astronomers a powerful tool to study their internal physics and chemistry. Just as earthquakes allow seismologists to understand what is happening inside our planet, asteroseismologists cleverly use detected starquakes to deduce the temperature, density, materials, and rotation deep inside the star.

Gaia was not designed to detect starquakes and cannot do so for stars like the Sun. But it turns out to be a champion in the number of discovered hot massive blinking stars - it found already more than 100,000 of them. Many of those rotate so fast that the Doppler effect shifts the frequencies of the vibrations into new regimes for asteroseismologists to study - think of an ambulance that approximates an observer and shifts the sound waves of the sirenes to higher frequencies the faster the car drives.

Gaia's DR3 time-series photometry allows to detect starquakes up to a level of parts-per-thousand. Along with its accurate luminosities for all these newly discovered hot massive blinkers, Gaia delivers a goldmine for the internal physics of fast rotating stars when used in tandem with space observatories TESS and PLATO. 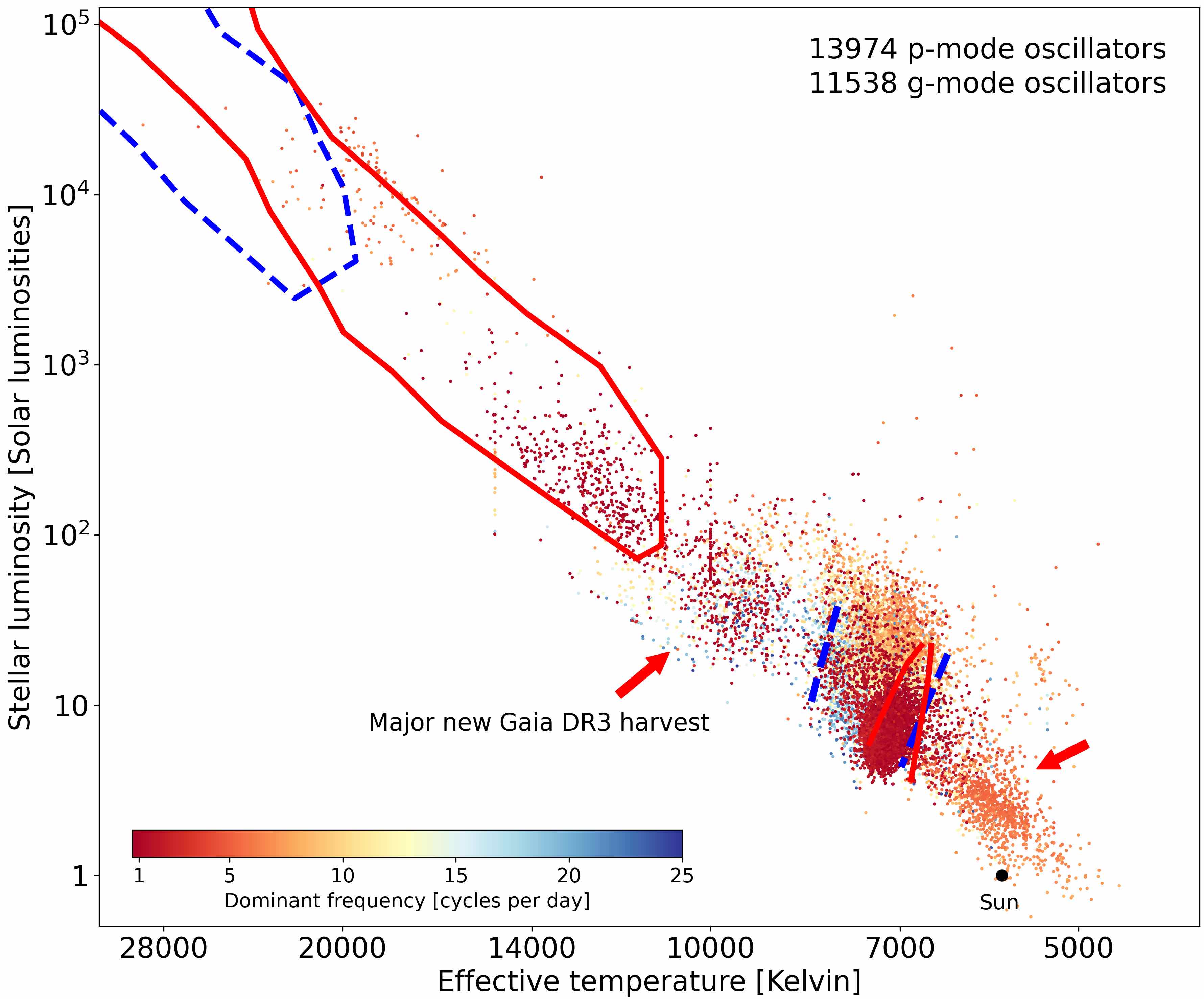 Hertzsprung-Russell diagram plotting the luminosity of stars versus the temperature of their atmosphere. The figure shows the position of 24376 oscillators discovered from the Gaia DR3 G-band light curves, colour-coded according to their dominant frequency. The thick red and blue lines indicate the borders of instability strips. These strips delineate regions enclosing gravity-mode (full red lines) and pressure-mode (dashed blue lines) oscillators expected from the current theory of mode excitation. Gaia DR3 delivers an order of magnitude more gravity-mode oscillators than found so far. In particular, it reveals such oscillators in between the strips and close to the Sun (red arrows), where no such oscillations are expected to occur. This major new Gaia DR3 harvest suggests that rapidly rotating or binary gravity-mode oscillators are common and calls for a re-evaluation of mode excitation theory. Credit: ESA/Gaia/DPAC, based on an image from Gaia Data Release 3: Pulsations in main-sequence OBAF stars as observed by Gaia by Gaia Collaboration, De Ridder, J., et al. 2022 - CC BY-SA 3.0 IGO. Acknowledgements: Image created by Dr. Joris De Ridder, KU Leuven, Belgium.

This story is based on the results of the paper "Gaia Data Release 3: Pulsations in main-sequence OBAF stars as observed by Gaia", by the Gaia Collaboration, De Ridder, J., et al. 2022

Gaia Data Release 3 contains 363 microlensing events. The animation below shows a map of the Galaxy with its prominent Galactic Plane and the Bulge. The lights turning on and off are the microlensing events, discovered in Gaia Data Release 3 G,BP and RP time-series. The timer in the corner shows the moment of time in years and the events are displayed with their real observed duration and background star colour, but the amplitude is not to scale.

Each event is seen as temporal brightening of a background star caused by the space-time curvature due to a foreground lensing object, either a star or some dark lens, for example a white dwarf, neutron star or even a black hole. More details in Wyrzykowski et al. 2022.