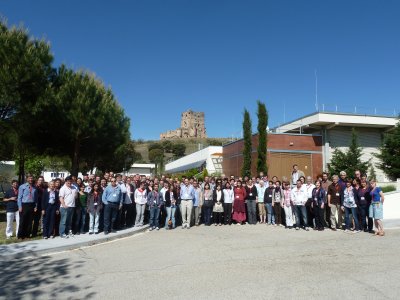 Attendees to the Workshop at ESAC
The XMM-Newton 2012 Science Workshop, held 21-23 May 2012 at ESAC, has attracted more than 110 participants from 17 countries. A key ingredient for success was the chosen topic: "Galaxy Clusters as Giant Cosmic Laboratories".

Most participants in the workshop are European, about 30 came from Australia, Canada, Chile, Israel, Japan, South Africa, and USA. Both senior and junior researchers attended the meeting.

XMM-Newton observations in the last decade have greatly improved our understanding of how galaxy clusters work, and the study of these large structures has hence become a 'hot topic' in current astronomy.

"Galaxy clusters are the largest structures clearly defined in the universe", says Hans Boehringer, from the MPE in Garching, Germany, and Chair of the Scientific Organising Committee. "And we have learnt a lot about them in the past years thanks to X-ray observations".

Some problems seem to have been solved, although there is no shortage of questions left and new questions arising. "One of the reasons we chose this topic is that we are certain there will be a lot of follow-up requests for XMM-Newton observing time in the next years resulting from various new missions", explains ESA's XMM-Newton Project Scientist Norbert Schartel. "It is important to review and discuss all we have now, before the astronomers prepare their new requests".

Galaxy clusters contain 50 to 1,000 galaxies. But they have also large amounts of gas and dark matter. In fact, the gas accounts for a larger amount of matter in the clusters than the galaxies. This gas is very hot - "actually hotter than the centre of the Sun", adds Boehringer -, and hence is best studied in high-energy X-ray light. That is the reason why X-ray observatories have been so useful in this field. 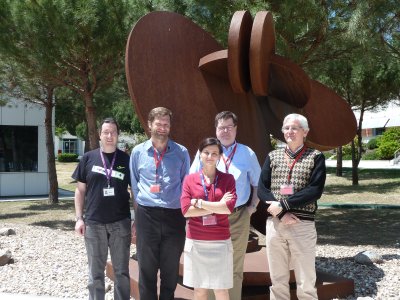 Other results discussed in the workshop are related to the role of dark matter in clusters, and to how the intergalactic space is enriched with chemical elements.

The Local Organising Committee (LOC) was not expecting as many attendants, so they have been "very positively surprised", says XMM-Newton SOC member, and Head of the LOC, Jan-Uwe Ness. During three days, 60 talks were given and about 30 posters were presented. The speaker program was oversubscribed by about 20%, which can be considered as an indicator of the high interest in this field of research.