Further information can be obtained from the XMM-Newton Users' Handbook

The X-ray Multi Mirror (XMM-Newton) mission is the second of the four cornerstone projects of the ESA long-term programme for space, Horizon 2000. The payload comprises three co-aligned high throughput telescopes with a FOV of 30 arcmin and spatial resolution of about 6 arcsec (FWHM). Imaging CCD detectors are placed in the focus of each telescope. Behind two of the three telescopes, about half of the X-ray light is utilized by the Reflection Grating Spectrometers (RGS). Each RGS consists of an array of reflection gratings which diffracts the X-rays to an array of dedicated charge coupled devices (CCD) detectors. The RGS instruments achieve high resolving power (150 to 800) over a range from 5 to 35 Å [0.33 to 2.5 keV] (in the first spectral order). The effective area peaks around 15 Å [0.83 keV] (first order) at about 150 cm2 for the two spectrometers.

The RGS design incorporates an array of reflection gratings placed in the converging beam at the exit from the X-ray telescope. The grating stack intercepts roughly half of the X-ray light and deflects it to a strip of CCD detectors offset from the telescope focal plane. The undeflected light passes through and is intercepted by EPIC-MOS in the telescope focal plane. Nine large format back-illuminated CCDs are operated in single photon counting and frame transfer mode at a temperature of -80 C. For each photon, the position and the energy is measured: the position to determine the high resolution X-ray spectrum as diffracted by the grating module, and the energy and position to separate the contributions from the various overlapping grating orders (and from the in-flight calibration source) and to reduce the background. 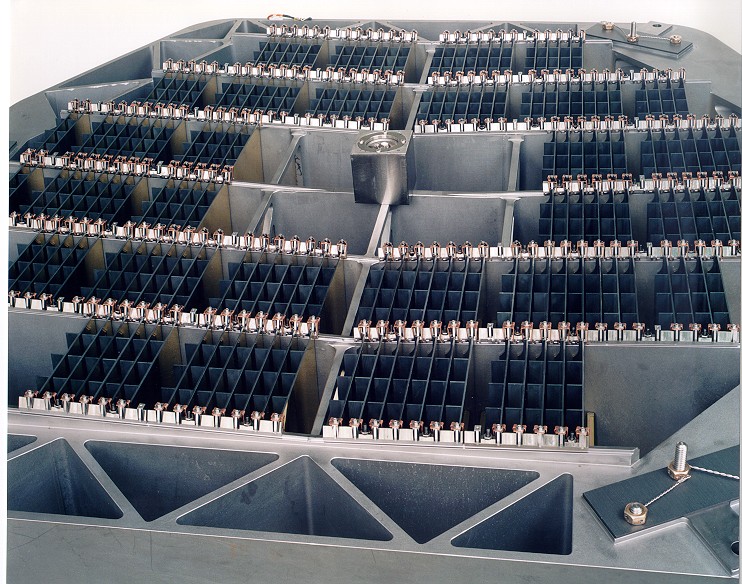 Detailed view of one of the RGAs

Each Reflection Grating Array contains 182 identical diffraction gratings (actually, one of the two RGAs contains 181 gratings due a problem found during installation), each measuring about 10x20 cm. The gratings are mounted in the classical configuration, in which the incident and diffracted rays lie in a plane which is perpendicular to the grating grooves. Because the beam is converging, the gratings are not parallel, and they are oriented so that the graze angle of the incident ray which intercepts the centre of the grating, "a", is the same for all gratings in the array. The telescope aperture is filled by rotating the Rowland circle about an axis passing through the telescope focus and the first order blaze focus. At any given position the grating grooves are nearly perpendicular to this plane. So as to make the array contiguous, the gratings are therefore slightly trapezoidal with their long edges parallel to the local converging light. In addition, the groove density on the gratings is not constant across the grating surface, varying by approximately ±10%. This is because the incident beam is converging, and aberrations would result if the line density were fixed. The groove density is approximately 646 grooves/mm at the centre.

The large grating substrates are very thin in order to keep the obstruction of the beam by the grating edges within reasonable limits. Early in the programme Beryllium was selected as the substrate material because of strength and mass considerations. However, it turned out to be very difficult to make Be-substrates with the required flatness tolerance, and SiC is the actual substrate material. The substrates are 1 mm thick with five stiffening ribs at the back running in the direction of the X-ray beam in order to maintain the required shape. The face sheets were fabricated to 1 wave (634.8 nm) and 10 waves flatness in the long and short direction, respectively.

The gratings were replicated from an identical set of master gratings onto the thin substrates. Master gratings produced by both mechanical ruling and by holographic means were tested and evaluated in this programme. Although holographic masters have been produced with somewhat higher reflection efficiency and lower scattering than mechanically ruled masters, unfortunately no suitable variable line density holographic master was available at the time of the flight model production. The gratings were covered with a 2000 Å gold coating.

The grating array support structure was machined out of a monolithic billet of vacuum hot-pressed Beryllium. Due to the importance of minimizing residual stress in the grating support structure, electrical discharge machining (spark erosion) was used in the initial machining process.

The precision alignment of the grating array was achieved by positioning the individual gratings against four, coplanar bosses which were precision-machined into stainless steel alignment rails mounted to the beryllium support structure. The gratings were held in this position by sets of spring chips. Alignment of the rails was achieved by interferometrically measuring the orientation and flatness of the first grating inserted for each set of rails. The array is supported from an attachment ring at the mirror assembly by three kinematic, titanium flexures.

The Reflection Grating Arrays were produced by Columbia University

The first shield also contains four internal calibration sources. These consist of the alpha-emitter 244Cm, and an Al target or a Teflon target, which produces Al K alpha (1487 eV) and F K alpha (676.8 eV) fluorescent emission. These sources each illuminate a small area of two CCDs, which is offset in the cross dispersion direction from the source image. The use of the sources is twofold, not only it allow energy gain monitoring, but also monitoring of the efficiency variation with time. The latter is particularly important since condensable materials will accumulate on the cold detector surface. If too much contamination build-up takes place, e.g. ice in the early phases of the mission or possibly worse, hydrocarbons, the CCD bench can be heated-up, to boil-off contaminants.

The detector is configured as a strip detector along the Rowland circle with a radius of 335 cm. In order to cover the 5-35 Å range, a length of 253 mm was required. The nine CCD-chips are back-illuminated GEC/EEV devices with two 384 by 1024 pixels, of 27x27 µm2 each. The width of the detector was matched to the height of the RGS spectrum (2.2 mm for 90 % energy width) and to the spacecraft absolute pointing error.

The CCDs were procured from EEV Ltd.

The front end electronics and the calibration of the CCDs were performed by SRON.

The detector housing were procured by the Paul Scherrer Institute.

The front-end electronics (clock-drives and pre-amplifiers for the CCDs) is part of the detector. The instrument is under control of the Instrument Controller (IC, MA31750 processor) which is fully programmable. The IC sets all bias settings of the CCDs and also configures the Clock Sequence Generator (CSG) which controls the clock drivers for each CCD. Different clock patterns can be loaded from the ground. The nominal readout of each CCD is through two output nodes resulting in different gains and offsets per read-out node of each CCD. The signals are amplified close to the focal plane camera and digitized in the RAE using a correlated double sampler (CDS).

All data are then transferred to the Data Pre-Processor. The temperature of the CCD bench is controlled by the RDE and this unit includes also the power converter (Power Supply Unit). All interfaces with the spacecraft On Board Data Handling bus (OBDH) are channelled via the IC. During periods when RGS is switched off (immediately following launch and during eclipses) the spacecraft provides a fixed power level to the CCD bench to avoid too much cooling. The control chain is fully cold redundant (hence two RDEs) whereas the signal chain is warm redundant. In case of a failure in one of the two signal chains it is possible to read out the CCDs through one output node. In case of the failure of a single CCD the others will not be affected and the second camera would provide the required redundancy (although the effective area will then be reduced).